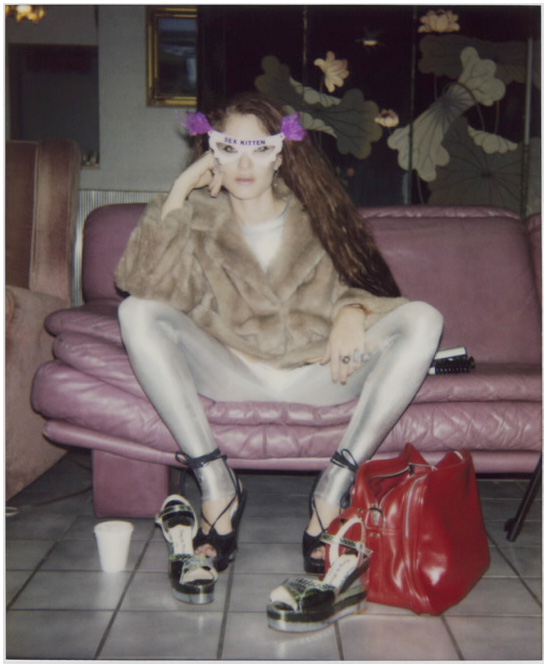 Audacious Emma Summerton has clocked one of the fastest rise through the new photographers ranks in recent time. You’ve seen her credit running in magazines as blue chip as Vogue Italia and ID. Now tune into her conversation with One’s Christopher Michael as she traces the path of her success.

Q. Youâ€™ve emerged quite beautifully and it seems that your pictures only ever appeared in great magazines, what was the secret to such a perfect launch?
â€¢â€¢â€¢ Thank you honey! I think for me it has been about having a great agent and being fortunate enough to start working with Edward Enninful a few years back. The right stylist at the right time can change your career there is no doubt about it. I have a fantastic supportive network of people around me who give me great advice, like when to say no to certain things and not to spread myself thin. It’s a bitÂ clicheÂ but I always believed in quality rather than quantity but it is also very hard when you’re starting out to say ‘no’ as you want to do everything that comes up and shoot as much as possible. But what you don’t do is just as important as what you do. It’s helpful to have people to remind of you of that.

Q. You once told me that it was your dream to shoot for Italian Vogue, and you are now shooting for them quite often, whatâ€™s the next dream publication you wish to tackle?
â€¢â€¢â€¢ A book of my personal work would be something I would love to do. I have a project I worked on for about 7 years, all on polaroid, all self portraits and abstracts, it’s been tucked away for the last few years. I have also just started a project with Charlotte Stockdale too which we are both really excited about so we feel we might give that a good year to shoot in between fashion action but we want to exhibit the images when it’s done.

Q. From following your stories I find you to have a very cinematic aesthetic, itâ€™s something I attribute to your incredible lighting, but also to the concepts you tend to execute.. are you the creator of such ideas or do you find that most of the stories are a collaboration between you and the stylist you’re working with?
â€¢â€¢â€¢ It’s always a collaboration once you start discussing an idea with the editor your working with, whether it’s something I bring or they do doesn’t matter, once your ‘into it’ it belongs to the team. I tend to get really involved on every level but it is different with everyone and changes depending on the shoot. Collaborating is a huge part of the fun and inspiration for me. Lighting is another thing altogether and I love to light! I’m really into lighting that doesn’t look labored which I guess gives a cinematic quality and I do find a lot of inspiration in cinema, the capturing of emotion, a tale to tell, to try and evoke a feeling even if it comes out abstract in the image.

Q. You live in bothÂ LondonÂ as well asÂ New York, do you find any differences in your inspiration and ideas between the two places or do you feel that your creative is without attachment to your current geographical location?
â€¢â€¢â€¢Â New YorkÂ for me is about work and madness,Â LondonÂ is more introspective and calm. I would have to say I think clearer inÂ LondonÂ but get crazy ideas out ofÂ New York. It took me so long to fall forÂ London, there were many years of struggling to survive here that maybe my love for it is deeper, it won me over. But hey who wants one without the other!

Q. Â Eva Herzigova told us after shooting with you for Vogue Italia, that you had inspired her more than any other photographer had in some time.. Some would assume that itâ€™s your fresh point of view, what would you say the reason is?
â€¢â€¢â€¢ Wow… that’s such a huge compliment! Thank you Eva! I’m kinda lost for words now actually. She was an inspiration for me too, I loved watching her, her expressions, she is a strong beautiful intelligent woman with tons of charisma! We had such a great time on our shoot, I think it was just a meeting of minds and a great energy from the start. I didn’t want to control her too much, with a model like Eva you shoot her for who she is, it’s like working with an actress and to reign her in too much would feel wrong to me.

Q. What do you think about the Return of the Icons and Supermodels?
â€¢â€¢â€¢ Bring it on! There is such a need and space for powerful experienced women in the industry who know themselves and are confident about who they are in the world. These things only truly come with time. Don’t get me wrong there are young new girls out there who are fantastic but it’s the way forward to mix it up more and show the full spectrum of what being a woman is about.

Q. Whatâ€™s an Emma Summerton girl?
â€¢â€¢â€¢ She is a little weird, sexy, a bit tough, slightly mad and appreciates another women.

Q. Youâ€™ve recently made a habit out of shooting Janete Friedrich, aside from the obvious allure of her almost art like beauty..what is it that you find so inspiring about her as a model?
â€¢â€¢â€¢There is something so weird about shooting Janete! She speaks hardly any English so the communication between us is very much about gestures, showing her a mood, and she just gets it and it’s wonderful to watch. She is very ‘in her body’…very comfortable, so I think she feels the picture because there is little verbal communication. Besides that she has a extraordinary beauty that is so refreshing, reminiscent of a silent movie actress, or a character from another time.