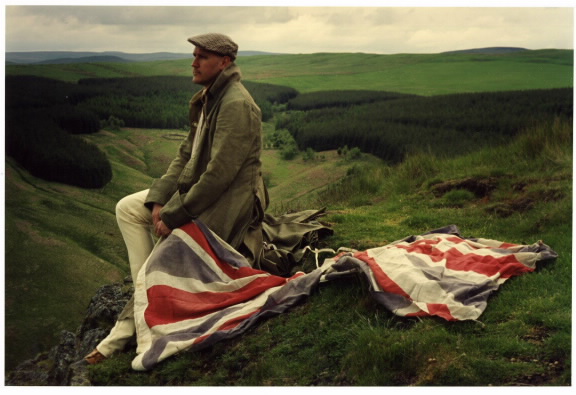 From what he’s done for Mcqueen, to photographers such as Tim Walker, Emma Summerton or even his own personal projects of the British Folklore museum, this Art Director/Creative Director/Set Designer is a new personal Favorite of OTM & 1 Management’s Christopher Michael.

Q. I admire the fact that you refuse to own a blackberry and have managed to achieve your current success without succumbing to the demands of technology; I also share your habit of not watching much television but indulging in many movies. What is your favorite Film?

As far as not succumbing to technology goes, the blackberry is the only thing I’m loath to acquire, I’m not a luddite, I just find the constant demand to be available to answer questions by tapping away at a tiny screen, demeaning when someone could just pick the phone up and talk to me. My favourite film is a really hard one as there are so many. So in no particular order, here’s a Top 10! (think yourself lucky I didn’t do my Top 100….)

2. A Matter of Life and Death, Dir; Powell & Pressburger.
http://en.wikipedia.org/wiki/A_Matter_of_Life_and_Death_(film)

7. And the Ship Sails On, Dir Federico Fellini
http://en.wikipedia.org/wiki/And_the_Ship_Sails_On

Q. You have recently embarked on the journey of making real one of your dreams, to open a British Folklore Museum.. Something that you originally intended to be a plan that would unfold later on in life, what made you change your mind and decide to do this now?

There were many reasons behind starting the project sooner rather than later. About 18 months ago, a number of friends and acquaintances all seemed to be stricken with various illnesses that seemed to come like a bolt from the blue. There’s nothing like spending time with a loved one in hospital to get you thinking about the bigger questions in life. What do we want from our remaining time here? What do we still want to achieve? Is there anything we want to be remembered for etc. My interest in Folklore and museums has been with me for as long as I can remember so events conspired to make me start the project sooner rather than later.

Working as a free-lance designer is wonderful and I wouldn’t swap it for anything else in the world, but over the last few years I’ve found many clients and photographers have been getting increasingly safe in their outlook and work. The present financial climate has of course affected this. I was reminded of a scene from Tim Burton’s film, ‘Ed Wood’. The protagonist of the film, dispirited with a failing project, goes to a bar and there spies Orson Wells sat at a table on his own. Ed plucks up the courage to speak to the great man who gives him this advice. ‘Visions are worth fighting for, why spend your life making someone else’s dreams?’ I wrote this down and pinned it to my notice board.

Q. I find myself to be someone who also appreciates and enjoys the history of England and its ancient traditions, I’m curious to find out what it is that is most alluring about these Rites and Rituals for you, is this something that was common in your family growing up? Or more of a personal attraction.

I can’t really say that there has been any direct family influence, my parents were antique dealers not Morris Dancers, but they both have a great love of the British countryside and particularly my Mother who was evacuated to Devon during the war. As children we would often spend trips exploring the UK and the history of an area would always be researched and relayed to us as children. My parents also had a copy of ‘Folklore, Myths and Legends of Britain, published by the Readers Digest in the mid-sixties. Inside its black, embossed covers, was a rich and magical world of Stone Circles, Witches, Giants, Haunted Houses and Seasonal Customs. In many ways it engendered my life-long interest in the folklore traditions of these Islands. Over the years I’ve become increasingly involved with the customs themselves, not only going to witness them but also taking part when invited to do so. By their very nature, they are anti-authoritarian, anarchic and often downright dangerous. They represent a moment out of time, where the norms of existence are bent or forgotten. Bonfire Boys can carry burning crosses through the streets before burning the Pope in effigy, (Lewes, November 5th) men and women paint themselves green and cover themselves in flowers and leaves to honour the coming of summer, (Jack in the Green Festival, May), crowds of people can follow a madly cavorting Obby Oss through the streets of Padstow on May Day, singing a song unchanged for hundreds of years. With the museum project, I hope to highlight that our Folklore traditions are just as alive and relevant to people today as they were hundreds of years ago. Times change and the meaning may not be the same, but the music and the customs go on with new relevance.

Q. As my own obsession with art and its importance in Fashion increases, I’ve become incredibly inspired and somewhat obsessed by the works of certain photographers such as Tim Walker and Emma Summerton, both of which work quite frequently with you! It was only recently that I stumbled across the information that you were the creative genius behind these legendary sets that have found themselves on many a blog as well as the wallpaper on my own computers. I would love to start with the over sized props of your Tim Walker sets, where did this style originate for you? What was it that initially inspired you to design the oversized objects concept?

Tim and I must have met over seven or eight years ago now. The first shoot we did together was for Italian Vogue and featured Camilla Rutherford passing through a magic mirror a little like Alice did. When we first met, we found that we shared a similar love of British History, Folk and Fairy Stories and what has been termed, English Magical Realism, as exemplified by the films of Powell Pressburger and Derek Jarman. The visual language that Tim uses in his images is drawn from many of these strands and the story of Alice in Wonderland may well have been the starting point for the over-sized prop idea. We found that the unreality of a gigantic camera, glass, book etc instantly gave the viewer an invitation to step through that magic mirror with us.

Emma is completely different and has her own very particular inner world. Again, we have found we both share a love of similar artists/books/films and there was a moment last year when Emma started to tell me about an incredibly obscure artist she loved. As she described her work I suddenly shouted, ‘Vali Myers!!’ I have one of the only books on her work in my library and Emma even lives in her old apt in NYC.

Q. With all of the sets you design and build, surely it would be a shame to have it all go to waste..what happens with the objects after? Where is that large camera for example that was use for the story you did with Tim?

It often breaks my heart to consign the props I create to the skip, but sadly, with them being so large, there is little alternative. When I work in NYC I can call Materials for the Arts and have things dropped off to them. Sadly London has yet to set something like that up. I’m pleased to say though, Tim has been able to store many things and has then displayed them at exhibitions of his work. The camera is one such prop. Nick Knight is currently setting up a scheme at his new Show Studio home in W1, which will aim to offer to the public, items that have been used in shoots, which is a fantastic idea and a huge relief!

Q. What was your first break in this business? How did you start?

Between the ages of eleven and sixteen, I used to visit the Natural History Museum on a Saturday morning to attend a Young Naturalist’s club. I should point out that it had nothing to do with nudism but everything to do with the study of the natural world. One of the things I ended up specialising in was the art of taxidermy. Many years later at Art School, I made what could be called jewellery or body sculpture and once I left college I continued to do so, refining the techniques and using more diverse materials such as precious metals and stones and notoriously, human sperm. Once they started appearing in shops the magazines at the time, such as I-D and the Face, reported on them and so the fashion industry became aware of them too. After several years of working in this way I became frustrated at the scale I was forced to work in, given that they had to be wearable and so started making more purely sculptural pieces. Around this time a fashion student from Central St Martin’s wrote a very sweet letter asking if he could borrow any pieces I might have left for his degree show. Never having shown the work in this way, I thought, why not and loaned him 7 pieces. His name was Alexander McQueen. I later became his Art Director for seven years.

Q. What is your favourite Set ever designed to this day? Be it your own, or that of someone else’s for a show, editorial or even perhaps an advertising job?

That’s such a hard question. I used to love those mad over-blown shoots Steven Meisel and Peter Lindbergh did for Italian Vogue, about eight years ago, when it was so creative, having its renaissance. Tim Walker of course has shown consistently that a good fashion story can be elevated beyond the norm by having inspiring sets and the work he now does with Shona Heath is stunning. A fashion show that I will never forget was a Dior Couture show, designed by Michael Howells at a Railway Station in Paris where a beautiful steam train pulled in to a platform covered in coloured sand and plants and disgorged the models. As far as my own work within the industry is concerned, a personal favourite would be the Untitled show for McQueen where I was allowed to turn the catwalk into a piece of sculpture, a glowing 60ft long structure made from low tanks of water which turned black when ink was pumped into them at a moment when there were no models on the catwalk. Then after some minutes, when the next girl did appear, a curtain of rain poured down for the final half of the show drenching them all. It was a great marriage between the set and the collection. Oh, and a party I did in a stunning private house in Florence where the hallways were forested and all the forest fruits, nuts, berries and mushrooms were all made from chocolate infused with flowers and the party last year for Hermes set in the grounds of an 18th century house which resembled an Indian Palace, where the guests visited Indian Gods in the ornamental gardens and then watched as a live horse painted pink transformed into a life-sized mechanical elephant……….

Q. What question have you never been asked in an interview that you’ve always wished someone would ask you? If there is one?

Recently it would have to be, ‘Would you like a cheque for 4.5 million for your museum project?’