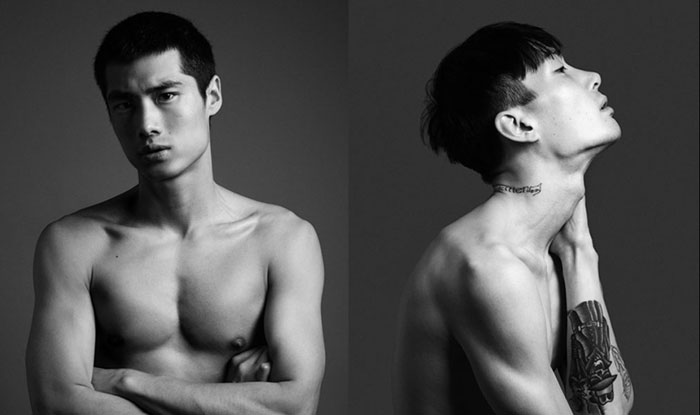 Diversity has been the buzzword in the fashion industry of late, and few understand its importance quite as well as the rising young photographers Idris & Tony, who are, respectively, African- and Asian-American. As an accompaniment to their gorgeous portfolio of the rising crop of Asian male models for MDX, the pair talk with Models.com about growing up with discrimination, their favorite new and established faces, and their hope to help turn Asian males into an object of desire like their counterparts, in a personal twist that I (as a young Asian-American) and everyone will surely be able to appreciate. Intro text by Jonathan Shia

(See the photos in MDX here)

Tell me about your backgrounds and how that influenced you in choosing this project?

Idris: Being black in America I can certainly relate to discrimination. Growing up in New York City exposed me to various cultures and I’ve always been intrigued by the beauty of Asian culture. I know this project is very personal to Tony because of the struggle he has had as an Asian American.

Tony: Growing up in the mid-west presented many challenges including a sense of pride in who I am as an Asian American and most certainly from a masculine stand point. Born to a Taiwanese mother and a Caucasian father, I grew up with my dad in a single parent household in rural Illinois.

I can remember kids running around me saying “Chinese, Japanese, dirty knees.” Looking back, I guess they said my knees were dirty because they thought I worked in the rice paddy fields? My Asian features paired with a pre-conceived physical stereotype put me at a disadvantage from my all American male counterparts. I received back handed compliments from the girls like “Your hair is so straight and silky. I wish I had beautiful hair like yours” and “Your high cheek bones make you so exotic.” Sure, I can appreciate those words now as an adult, but as a teenage boy those are the words I had only ever heard used to describe females. Hearing them at that time was emasculating.

It wasn’t until my late 20’s when I visited Taipei that I heard words like “handsome” and “good looking” used to describe my features. I could tell by their delivery that the attraction was from a place of desire for me as a whole and not a dissection of my features. Hearing those words finally made me feel masculine, and even if they had been spoken to me before in my homeland of America the overall environment made the words fall on deaf ears.

Although there has recently been a greater visibility of Asians in Western advertising, we are still mostly typecast as the sidekick, but when will we be the leading man, the object of desire? So we approached the project from a Western perspective photographing Asian male models in various denim pieces because you can’t get much more American than t-shirts and jeans.

Idris: We wanted to draw on their masculinity without completely removing them from their personal demeanor. We didn’t want them too polished or to create a false illusion, but rather capture them from the perspective that they are naturally handsome men.

Tony: Our hope is that this series of portraits within this project inspires society to re-consider the way they view Asian males, specifically in America. That our industry colleagues use their “persuASIAN” to give young Asian males around the world an array of role models whom they share the same features and demeanor with. I wonder at times where my confidence would have taken me if I had these role models.

Is there anyone that you wished you could have shot but weren’t able to?

Idris:This is just the beginning of an on going project so there is still time for us to work with guys like Zhao Lei, Paolo Roldan and Godfrey Gao. We’re also excited to meet Sang Woo Kim, a new face out of London.

Tony: I would love to include Kevin Louie in this project. He was the first Asian male model I ever saw flipping through fashion magazines. In addition I find Seijo Imazaki inspiring, not only as an Asian American model, but also as an artist, a father, and loving husband. He is a man who has beaten the odds.

Who made an exceptional impression on you and why?

Idris: There is something so charming about Jae Yoo. He has a heart of gold and it really shows in his character. We’ve had the pleasure of photographing Jae for various projects as well as casting him for numerous fashion shows. His work ethic is one to be admired.

If you could have any magazine or brand come to you and say, shoot this Asian male model, what brand would it be and which model would you choose for it?

Tony: Since we are talking about portraying Asian men in a more desirable nature and changing a stereotype then it would have to be Calvin Klein. The brand has used Hidetoshi Nakata in a campaign for the X underwear line, but again he is one of four guys in that campaign. Give us our own stage. They’ve done it for Latinos with the use of Antonio Sabato Jr. They’ve done it for Caucasians many times with the likes of Joel West, Jamie Dornan, and most recently Matthew Terry.

Idris: Calvin Klein campaigns are seen in shopping malls, on television, billboards, magazines and social media across the world. You may not have seen him in the movie Amistad, but you know you saw Djimon Hounsou’s beautiful African body in their Steel underwear campaign.

Tony: We love the idea of using a fresh face so we would cast Krit McClean. He has the body and attitude for the underwear campaign, the face for fragrance and eyewear, not to mention the overall look and fit for the collection. He has both commercial appeal and an editorial edge to really compete with his white counterparts. And that’s even playing it safe. Krit’s half Thai and half British, but the industry has already been playing it safe so why not push the envelope a little bit further. Make him a leading man and the object of desire for a girl like Christy, Kate, Natalia, or Lara.

On The Street: PFW Day 5