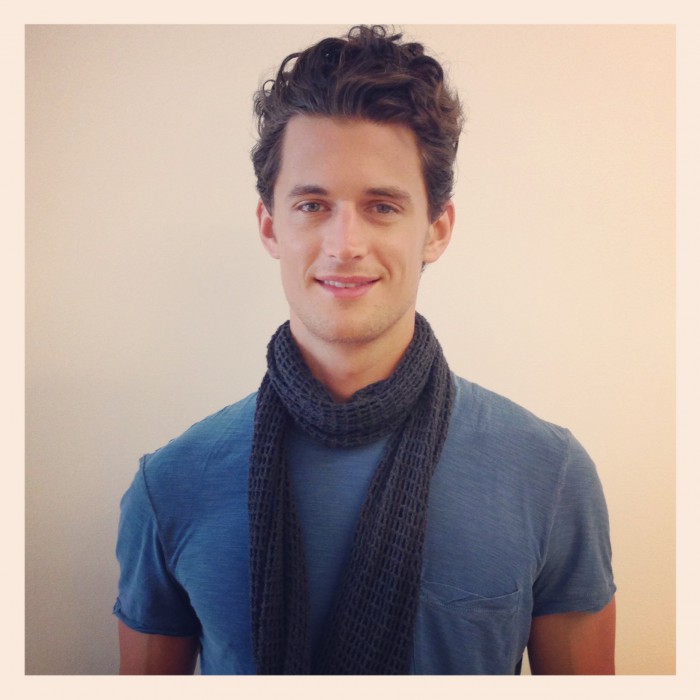 One of the staple events of every November is the New York City Marathon, with tens of thousands of runners crossing all five boroughs on their way to a triumphant finish in Central Park. Among the newcomers in this year’s race is superstar Garrett Neff, who is running to raise money for the Children’s Cancer & Blood Foundation (CCBF), a cause that has been very close to him since childhood. Neff’s philanthropy this year follows on his initial plan to run for the City Parks Foundation last year, a goal that was aborted when the marathon was canceled after Hurricane Sandy. But he is back on track this time around to take the course this Sunday, and you can help the cause by donating here. He spoke with Jonathan Shia earlier this week about his training regimen, his personal connection to the CCBF, what he did last year instead of running. (Instagram by Betty Sze for models.com)

MDC: How did you decide to run for the Children’s Cancer & Blood Foundation?
Garrett: I’ve always been pretty close to cancer research ever since a friend of mine was diagnosed with cancer in middle school. I visited him in the hospital and I developed a strong belief that cancer research can really pay off in a lot of ways. Running for a cause like CCBF is a natural choice now that I’m up in New York because they’re helping so many kids on an annual basis. This is actually the first project that we’re doing together, but I think it’s a relationship that’s going to last a long time.

MDC: I know that you had been planning on running the marathon last year to raise money for the City Parks Foundation before it was canceled. How did you get involved with them?
Garrett: The City Parks Foundation distributes money to different park programs around New York City in all five boroughs, so it seemed really appropriate for me to run for a cause like that because you’re running through all five boroughs. I learned a lot about what the City Parks Foundation does, and I think it’s remarkable. The money that they raise goes to all these programs for kids who can’t afford to play sports. I was always an athlete—I still consider myself to be an athlete—but luckily where I grew up there were lots of cheap options for sports. This gives back in a way that I think is meaningful for kids to develop not only athletic skills, but also relationship building and teamwork skills.

MDC: You’ve always been very active; you’re a lifelong tennis player, and you do lots of sports and activities. Is this your first marathon?
Garrett: Yeah, this is going to be my first. After the marathon was canceled last year, I decided that, instead of running on Sunday, I’d use all this energy that I had built up over the many weeks of training to go out to the Far Rockaways with MoMA and not only bring products that the people would need—like canned goods and toiletries and diapers—but also help pump their basements and clean up their houses that had flood damage. That was my plan, to just do that on Saturday and not run on Sunday, because the actual marathon had been canceled. But on Saturday night, a friend of mine who was also running said, “Hey, I don’t know if you want to do it, but we can still run tomorrow. We’ve done the training, we can still run the 26.2 miles.” The money still went to the charity, so I was like, Why not, let’s make an additional effort. We ran in the park, because there was some damage to the rest of the run. I had a pretty good time, 3:24:22, so this year hopefully I can match or beat that.

MDC: Is running a marathon something you’ve wanted to do for a long time?
Garrett: I was always training for specific sports when I was younger, and it was never about running a super-long distance at an even pace. It was always sprints for soccer and quick back-and-forth and agility for tennis. Over the last eight years since I started modeling, just from exercising regularly, my runs started to get longer and longer. Eventually I was sometimes—not very often—running sixteen miles and I was like, Wow, that’s surprising. I didn’t know why I’d ever want to do that, but once you’re in the middle of a run and the music’s right, you just keep going and going until you’re out of energy. That made me think I could probably do a marathon.

MDC: What was your training regimen?
Garrett: I’ve heard crazy stories, like there was a guy named Dean Karnazes who ran fifty marathons in fifty days, and to me that just seems impossible. I hear that, and I think, Oh, you could keep it up and you could run these long runs all the time, but I don’t think running that much all the time is really good for the body, I think it really takes its toll. My original goal was to do it once a year so I could keep up with the training, and about five weeks ago I started doing my longer runs again. I gradually worked up from sixteen miles to twenty-two, and then started tapering off over the last few weeks. I did fifteen miles last Sunday and then a couple days ago I did a twelve-mile run, and that’s the longest run I’m going to do until November 3.

Best Dressed of the Moment