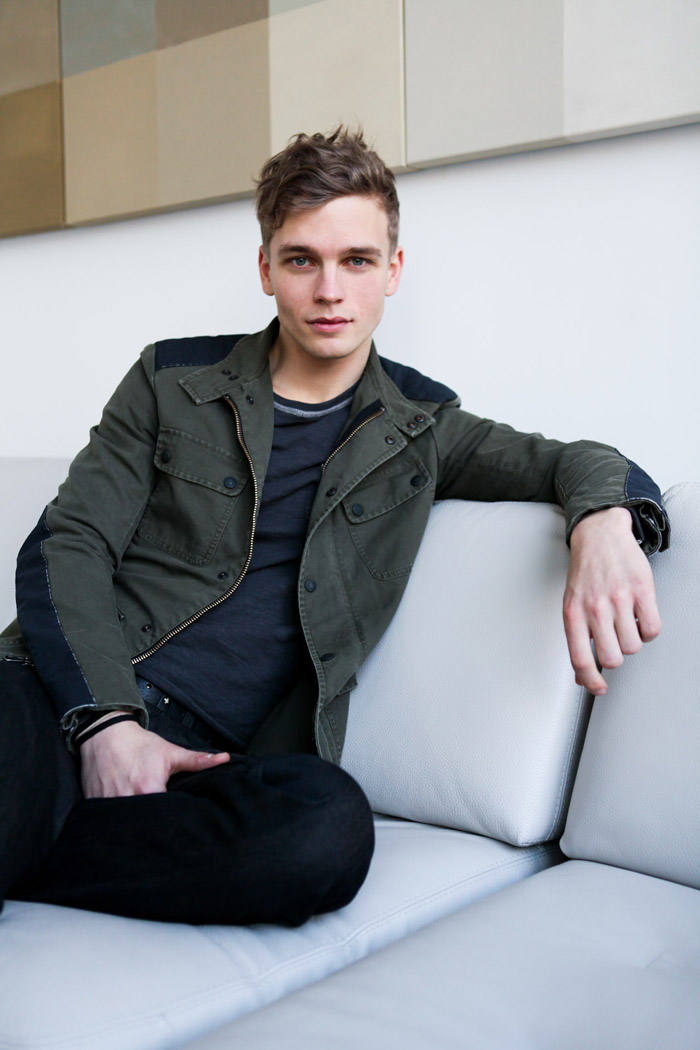 Call him the Reluctant Supermodel. In the short year since he decided to give modeling a try, Gothenburg native Benjamin Eidem has seen his career skyrocket, starting as a Top Newcomer for Spring/Summer 2012 and currently ranking fifteenth on our Top 50. With countless campaigns, editorials, and shows now under his belt—including a debut opening and closing Prada exclusive last June—it’s hard to imagine it took Eidem years after first being scouted to come around to the idea of working as a model. But the industry is certainly glad he did. He spoke with us recently about the highs and lows of the past twelve months, January’s star-studded Prada show, and the well-deserved break he just got back from.

MDC: How did you first get scouted?
Benjamin: It was in Miami when I was eighteen. I was standing outside a restaurant and some people from an agency came up and asked me if I wanted to start modeling. I was on my way to the agency to do it and I even had the contract in front of me but then I changed my mind, I didn’t want to do it. Then I went back to Sweden because I was only on vacation in Miami and in Sweden there was a photographer who wanted to take pictures of me, but I didn’t want to then either. And then I actually went in to Modellink and decided to go with them.

MDC: But you didn’t decide to really pursue modeling until about a year ago. What made you change your mind?
Benjamin: So many different people told me to try it out so many times, I just decided to go for it.

MDC: How do you feel that waiting a little bit before starting to model full-time has helped you to prepare for the rigors of the industry?
Benjamin: I didn’t really prepare, exactly, since I didn’t know anything about the industry before I started. But I think that taking some time off and maturing a little before starting has really helped me keep a clear mind about everything that’s happened. I think that some of my work experience in some of the other jobs I had before has carried over as well. But in a way I think it would have been easier to start earlier, since when I did get into modeling, my life was kind of settled—with a girlfriend, a new boat, a new apartment, and a lot of other things to take care of—and since I don’t want to give anything up, all the traveling makes it difficult sometimes.

MDC: What were you doing before you started modeling?
Benjamin: I had a lot of different jobs, but right before I started modeling I was working in an electronics store and I was also shooting pictures at nightclubs for different websites.

MDC: What has been your favorite experience in modeling so far?
Benjamin: Probably opening and closing Prada last year. It was pretty much my first show. I understood after a while what a big deal it was. I found out I was going to open it a couple of hours before the show. I was extremely, extremely nervous. At the same time I guess I was happy. I was extremely nervous, but afterwards it felt really good. I got a big kick from it after I finished.

MDC: You walked the Prada show in January alongside a lot of famous actors like Gary Oldman and Adrien Brody. What was that like?
Benjamin: We didn’t find out until a little before that it was going to happen, and they were all in a separate room getting ready, but it was really cool to be standing in line with them waiting to walk out.

MDC: What do you like most about modeling?
Benjamin: My favorite is anytime I get to shoot outdoors in a city, just going around and seeing things while I’m working. That’s not so common, though, but when it happens it’s been a nice experience.

MDC: What do you hate most about modeling?
Benjamin: Being away from my girlfriend and my friends so much.

MDC: Are there any other things you’ve done that have really stuck out as great memories for you?
Benjamin: I did a campaign for this Swedish shoe company Vagabond. We shot a pretty long video for it. We were just walking around in Madrid starting in the afternoon through the middle of the night to almost early morning, doing different things in a cafe, in the park, on street corners. It was fun.

MDC: Who are some of the favorite photographers and stylists that you’ve worked with?
Benjamin: I’ve worked with so many amazing photographers and stylists but I definitely always love working with Willy Vanderperre. I’ve shot so many things with him, Fantastic Man, my i-D cover, and campaigns for Aquascutum, Adidas SLVR, and COS. He is a really nice guy and I like his photographs. I really like working with Olivier Rizzo too.

MDC: What do your friends and your girlfriend think about your sudden success?
Benjamin: My girlfriend and I have been together for a long time, so she thinks it’s a little weird. But it’s weird for me too.

MDC: How was your vacation you just went on?
Benjamin: I was in Thailand with my girlfriend for most of March. We were traveling around, visiting a lot of different places, relaxing. We were backpacking and we didn’t have an itinerary, but I always like the idea of surprise.