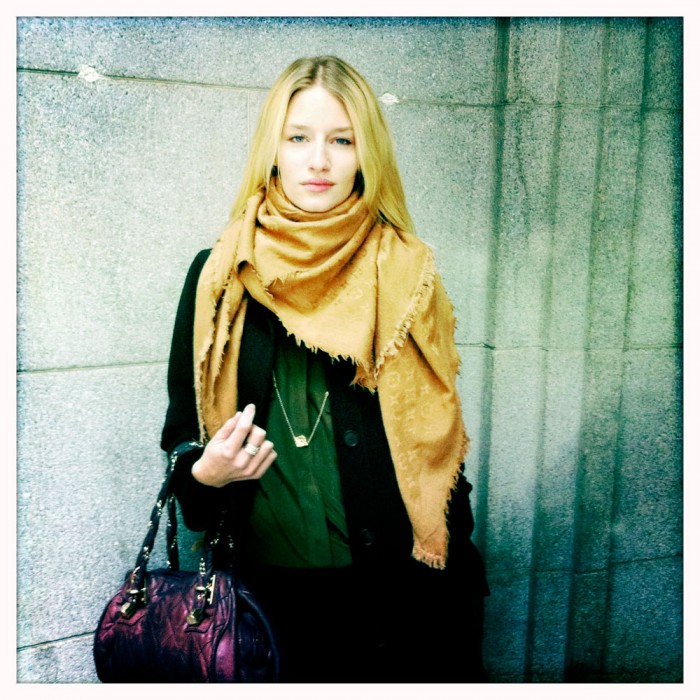 Everyone knows that fashion has a high turnover rate, so when a model can say she’s been working in this business for 10 years it is cause for celebration. Linda Vojtova‘s face is familiar to anyone who has opened a magazine in the past decade and on the eve of a retrospective dedicated to stellar career, the Czech beauty sits down with Models.com talk about her incredible past and bright future.

MCD: How did the idea for a ten-year retrospective get started?

Linda: It started from a small idea. We just wanted to get a few people together and do a lot of celebration. After thinking about it for a few weeks, we decided that we should do this on a much bigger scale and try to bring the new generation of great established photographers already together and try to make an exhibition. It was really a step-by-step thing. It involved a lot of people, who did a lot of brainstorming. That’s how it came together. It took us about 6 months from the beginning.

MDC: Now, tell me a bit more about the exhibition. Which photographers will showcase their work?

Linda: So we have twenty photographers and four artists. And we are going to have a video projection of the retrospective images that we have done in ten years. We also have two video installation that we did for the event. Some of the photographers are Dan Jackson, Paola Kudacki, Anthony Maule, Jem Mitchell, Francesco Carrozzini, Bettina Rheims, Sante D’Orazio.. So it’s mostly the new upcoming photographers and we have ones like Sante and Bettina, the legends of the business.

MDC: Since you’ve been working for ten years, what changes have you noticed in the industry from when you started as a model?

Linda: I think the biggest change is that everything is so much faster now. When it started, there was no internet really anywhere. It was started in New York, but Europe was very behind in that. And I did not have a cell phone. Before, you did not have a Blackberry with which people could always track you down. So it changed a lot. Before I would be in Prague and they would call me and say “Hey you are working in 3-4 days” and you could make some kind of plan with school. Now it’s instant and you literally have to be there tomorrow. So everything is much faster and therefore there are more models and more competition. I think there are more photographers, more of everybody, because the industry is faster and different.

MDC: I think the whole world is becoming fast. Everything has to be now or five minutes ago. Now throughout your career you worked with some amazing photographers. What would you say is one of your favorite moments that you had?

Linda: I think the best first moment was when I first came to New York and worked with Steven Meisel within the first week I was here, which was pretty incredible. That was going from nowhere – literally being a new face — to establishing my place in the fashion industry. And I cherish all my moments. There are worse days and there are amazing days. But, I realized after ten years that you really have to enjoy every job. Especially now with everything going so fast, you have to be thankful to work so well.

MDC: That’s a good way to look at it. Because everything is so fast now, there is a faster turnover. To be working for ten years, it’s amazing to be working still at such a high caliber.
Linda: It is not as hard to get booked on a job with a high-end photographer or magazine as it is getting re-booked. This is very hard for young girls these days because there are so many girls and not all of them get a chance twice. Everybody is always looking for the new thing. When I first started, it was a new thing for at least a few seasons or for a couple of years. Now, we get the new thing and in six months you get another one. This is the way the world is now. It’s not good. It’s not bad. It’s just what it is.

MDC: It’s cross-cultural. Six months is all everyone has and then it turns over and it’s a whole new thing. It’s very fast-paced I feel. So you have already had ten amazing years.. what is one of the things you look forward to for your future?

Linda: I’m looking forward to more great years modeling. And I’m starting a new jewelry line called Love Universe and that’s the core brand. My overall brand is going to be called Love Linda Vojtova. My exhibition will be launching few of the pieces that will be ready for the event. So I will be doing this a lot. It’s going to be fun. I’ll be doing a lot of trade shows and right now we’re working on the website. It’s really exciting to do different things other than just modeling. Since in fashion, you get to meet so many amazing stylists and designers, it is so nice to get different ideas and to see how you can become a part of the whole world, rather than simply being a model. It’s exciting! I’m going to enter the creative fashion world that I feel I can become a part of a little bit more.