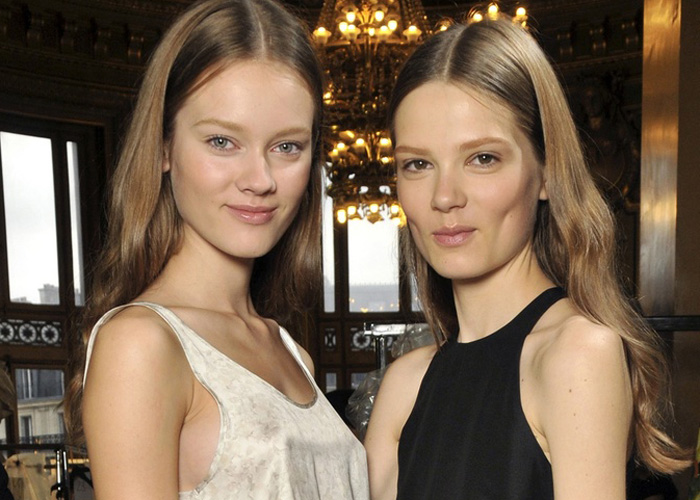 Every season we ask fashion’s top walkers to share their experiences behind the scenes and the moments they felt mattered to them. This season’s line up includes a few amazing nights on the town, some high speed hi-jinks on motorbikes and a chance encounter with a Beatle. 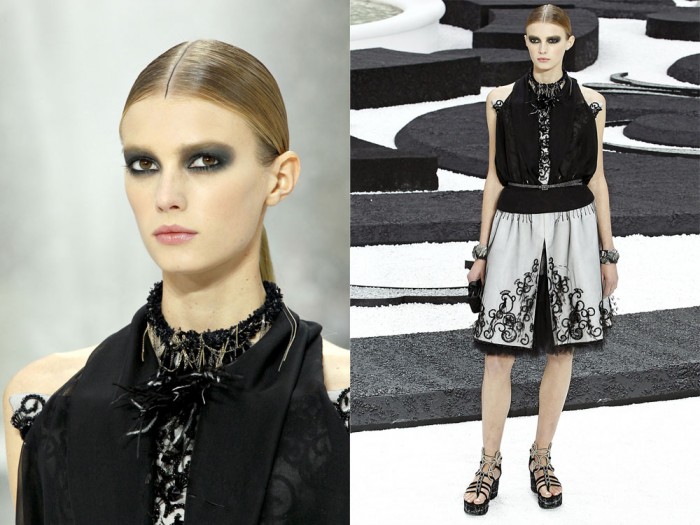 Being part of the Chanel show in Paris was my most memorable moment during this fashion week. It was breathtaking, such a spectacular show : the orchestra, the Grand Palais, grandiose! I usually never get the chance to go out during shows but I went to the French Vogue anniversary party, a masked ball in a private hotel in Paris. Trying to guess who was who was a lot of fun ! 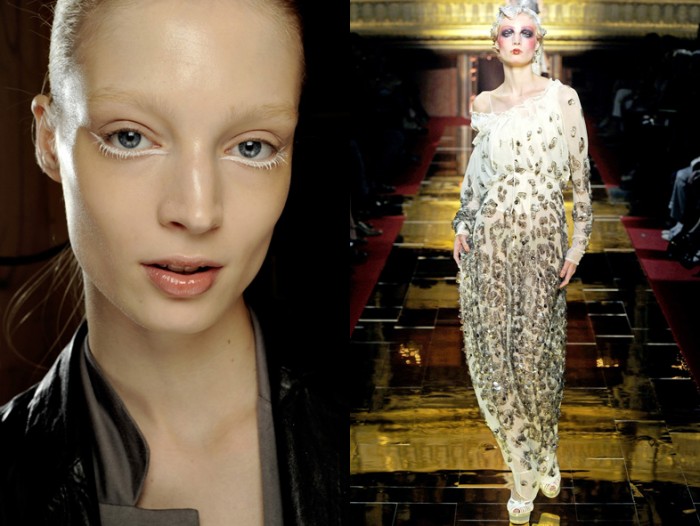 My best fashion moment for S/S 2011 is the John Galliano show! The clothes and the casting was amazing! John told us all a story backstage about who we should be and where we had come from, it was amazing to able to feel the emotion in the air backstage, going out on to the runway in the most stunning venue and playing our role was just the best. 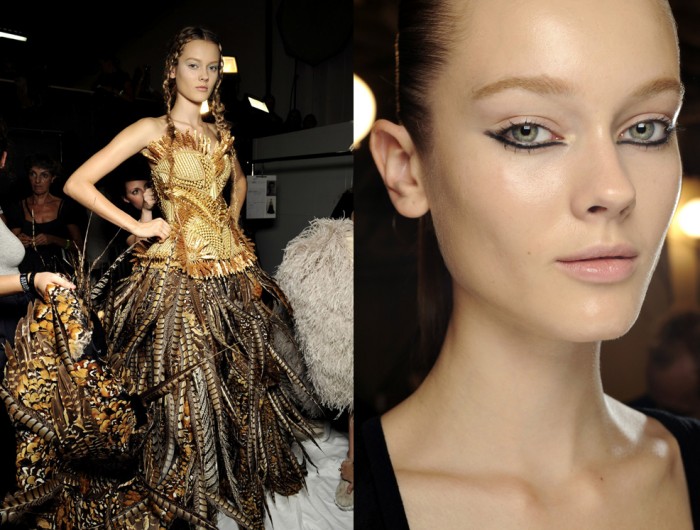 It was almost the end of “the fashion month” in Paris where everyone was already tired and the shows had become a monotony, the Alexander McQueen show changed everything.I felt like for this one everybody just forgot where they were and fell in love with amazing collection that was more of pieces of art then then actual clothes. I was very honored to wear the amazing gown ;)

New York fashion week was my favorite time this season! I had my sister in the city as well as friends and atmosphere is always very relaxed there. 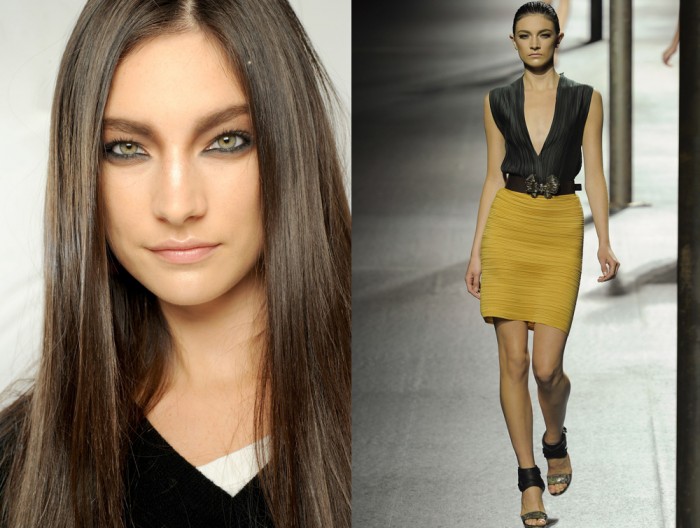 One of my most memorable moments of fashion week was at the Lanvin show. Every time a girl came back after walking, they were out of breath and practically limping because the heels were super high (but gorgeous) and the runway was so long! Was definitely one of my favorite shows of fashion week though and always is.   Another memorable moment of fashion week was the final day. A bunch of the girls after the Miu Miu show hopped in Kasia’s car, went for a nice dinner at an amazing Thai restaurant, and celebrated the end of another show season! 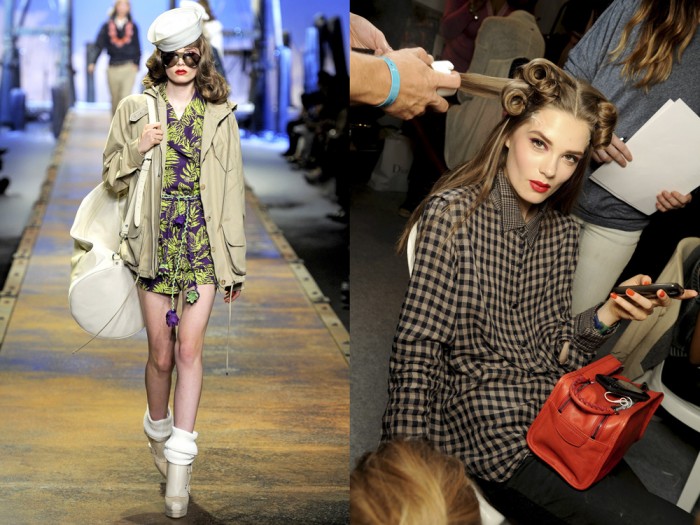 Caroline Brasch Nielsen | 59 Shows ( Image Credit | Vogue.co.uk )
As I am a very big fan of Paul McCartney, I got sooo excited to see him live when I did the Stella McCartney show in Paris! I also had the pleasure of having my sister fly in and visit me during the shows, it was so nice to hang out with her and go exploring Paris. 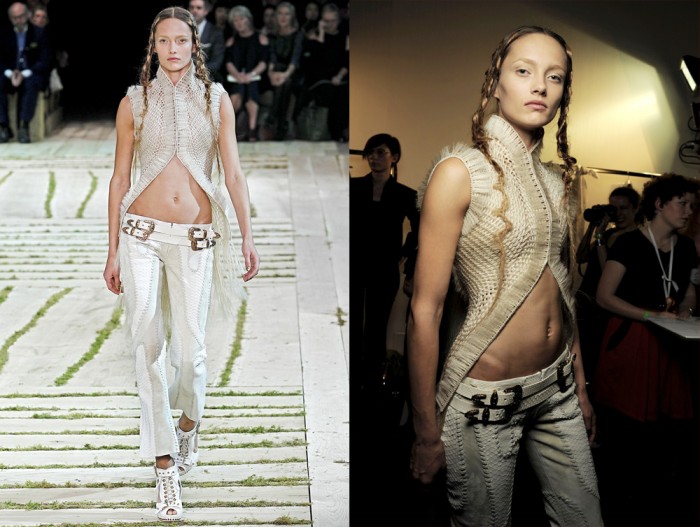 Karmen Pedaru | 59 Shows ( Image Credit | Vogue.co.uk )
I was really honored this season to have the privilege to open and close a bunch of shows and loved that I was able to go through an entire season without getting sick. That’s by far my favorite thing from fashion week! 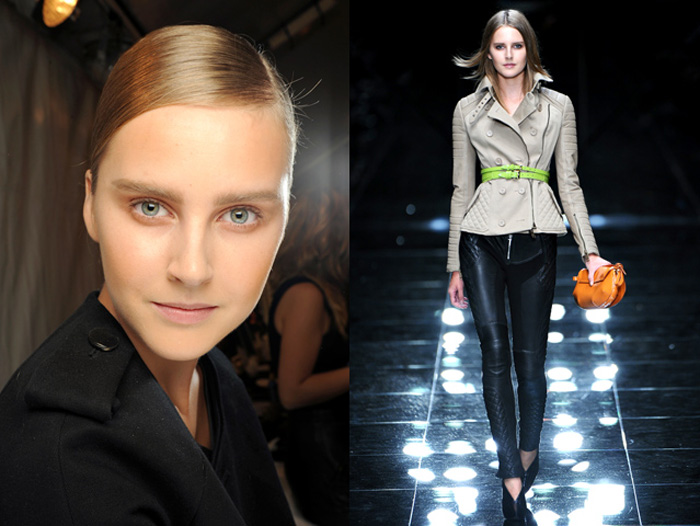 My memorable fashion moment was opening the Burberry show, It was an honor to open a show for such a huge brand.

In Milan I won’t forget my driver, I had some funny experiences with him, and I was very impressed because he managed to get into and watch almost every show I did, without any pass or anything! and showed me videos after of me walking!

In Paris I stayed at a friends place, and they went and followed me backstage with me to some of the shows, and when I would get home late at night, we would have nice dinners and red wine, it’s all you need after a day of shows! 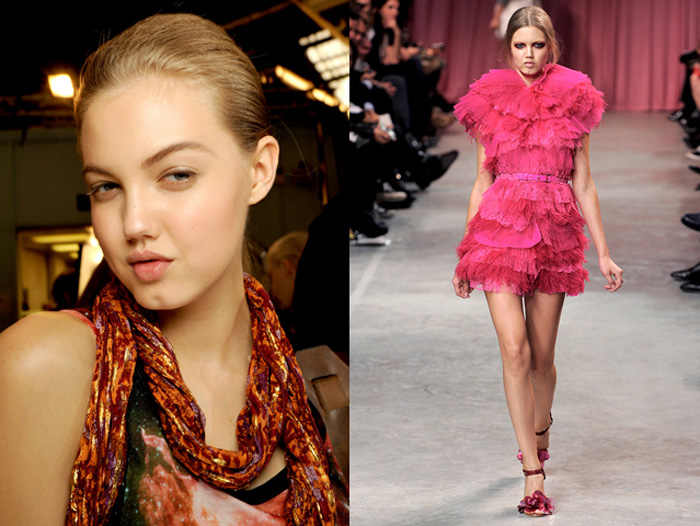 My most memorable moment was in Milan having dinner with Moe, Dean, and Michael from D’managment and having the biggest lobster and walnut ice cream! 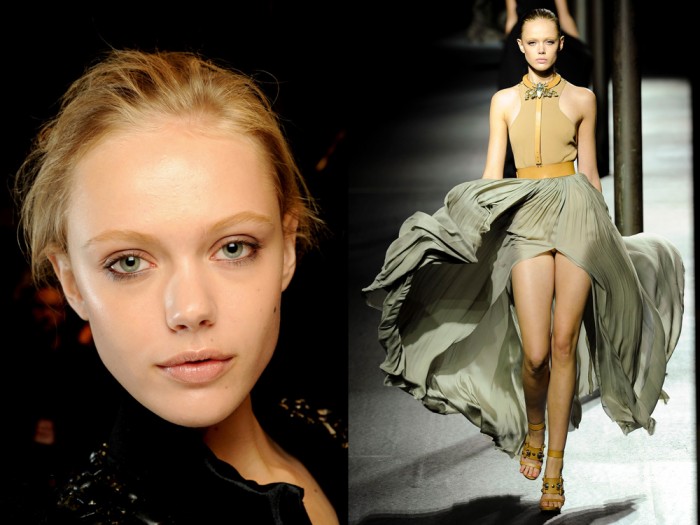 One of my absolute favorite moments of this season were when I were given the amazing honor of the opening spot at Lanvin. The feeling of opening a show so energetic, so strong and so incredibly beautiful is something I cannot describe other than feeling truly honored, certainly a memory to keep for the rest of my life.

Another great moment of this season was at the end, having arrived in Paris, walking into our (mine and Jacs) amazing apartment in the North Marais! I walked in exhausted, carrying three suitcases and with low expectations and were met by a 140 sq meters apartment palace and nothing could’ve possibly been better that night crawling into a giant bed after cooking my own meal. 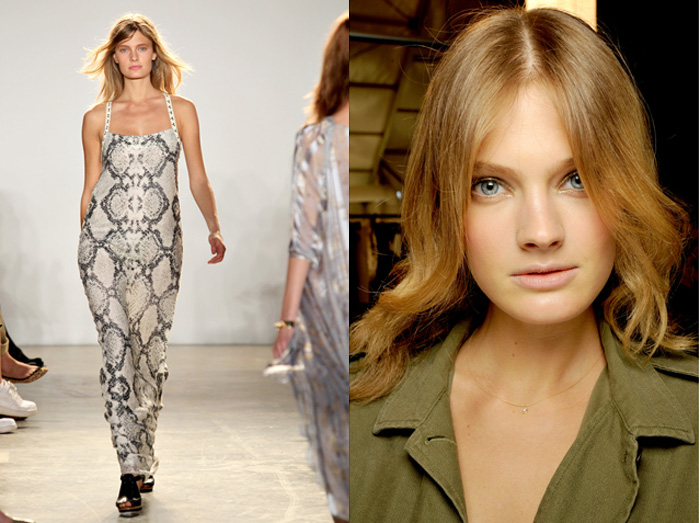 First one in NY, at the Thakoon show. The show was at 5pm and Siri, Sara and I were supposed to arrive a little bit late because we had an other show just before at 4pm. Unfortunately our 4pm show got started so late that we arrived in Thakoon backstage around 5.30pm, everybody was waiting for us and when we finally arrived the show had started already!!! Lucky I had the last outfit on the runway, I just had the time to run to my rack to put on my dress on and close the show without hair or make up! That was crazy!

Second nice memory was in Paris, one of my friends celebrated his birthday on a boat on the Seine the last day of fashion week. The boat took off for 2 hours during the night, Such a magical moment with all of Paris lighted and the illuminated Eiffel tower! 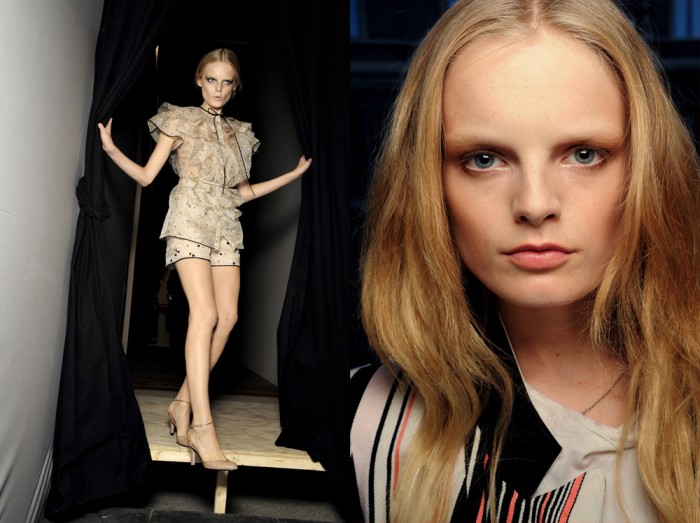 Hanne Gaby Odiele | 50 Shows ( Image Credit | Vogue.co.uk )
I always love a motorbike in Paris between shows, but I think I said that last season. My favorite moment this season would have to be the backstage at Emilio Pucci this season and the frantic search for the “BLACK BIKINI FOR TONI!!”

Having dinner and drinks at the Nhow hotel in Milano and watching a woman walk DIRECTLY into a glass door. She was totally fine, but it was a well needed laugh during Milan! 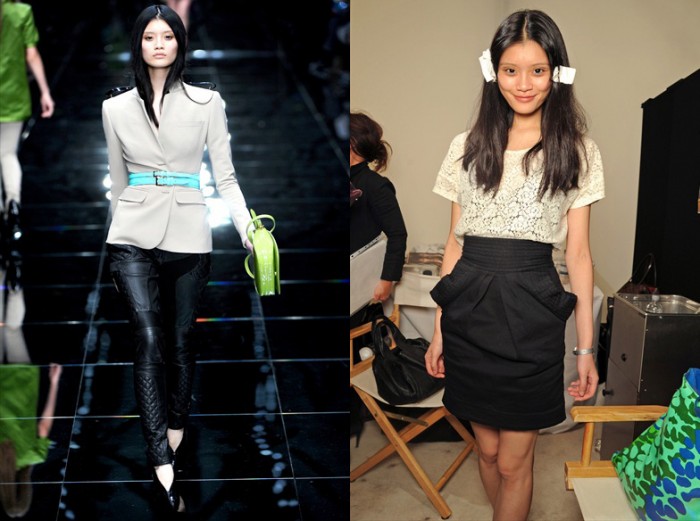 Ming Xi | 51 Shows ( Image Credit | Vogue.co.uk )
I really enjoyed the Burberry show this season. I loved the music! It made me feel like I was just walking down the streets of London in the fall with all the trees beside me. It was just so soft and comfortable. It felt so natural, so there was no need to be mean looking on the runway! Plus I got to hang out with a lot of my friends throughout the season, and of course to have some great Chinese food! It was so delicious and such a happy time! Good food is VERY important!! 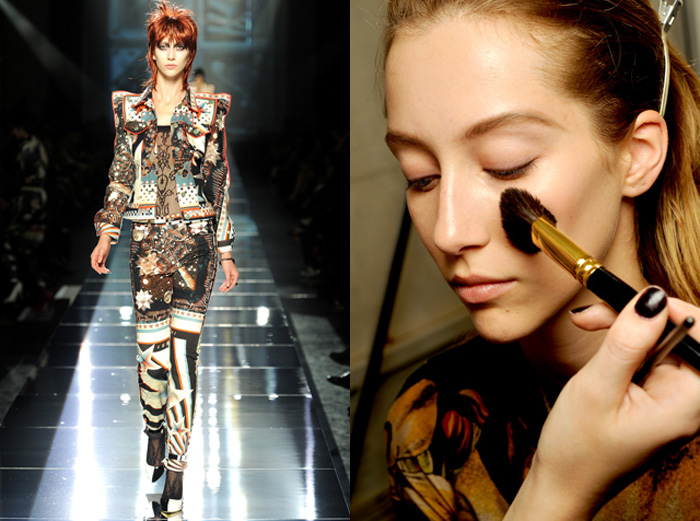 Alana Zimmer | 49 Shows ( Image Credit | Vogue.co.uk )
The Gaultier show had a great moment! I was standing on stage with Karlie, Rianne, and Frida when Beth Ditto walked. She asked us a lot of questions, and said she was really nervous, but I think she did really well! Probably better than I did my first show, and I didn’t have to do a solo at the end! When Beth started singing the backstage went totally silent, not a regular occurrence at shows!   I also had the opportunity to have a couple of really nice dinners in Paris with friends. The fact that I was sitting at a table and the food was not covered in hair spray certainly made it special. 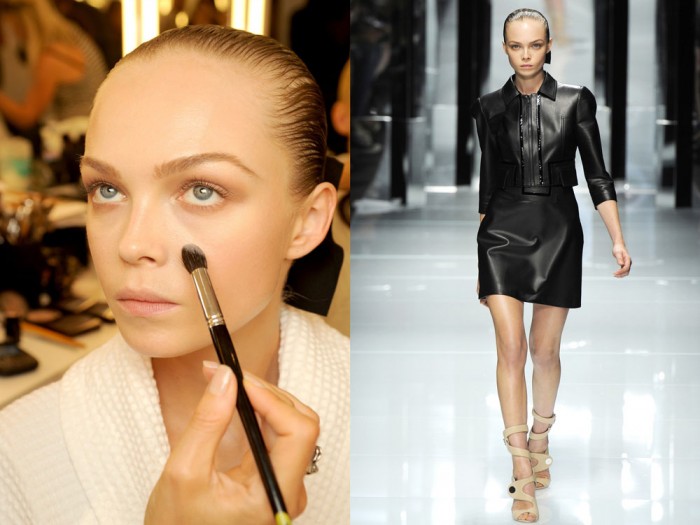 Siri Tollerod | 49 Shows ( Image Credit | Vogue.co.uk )
It was very memorable to do Versace for the first time and I felt very sexy in my leather skirt.

After the last show in Paris (Miu Miu) we were a few girls in a big car, driving around Paris with a good bottle of champagne celebrating the end of the season! Amazing:) 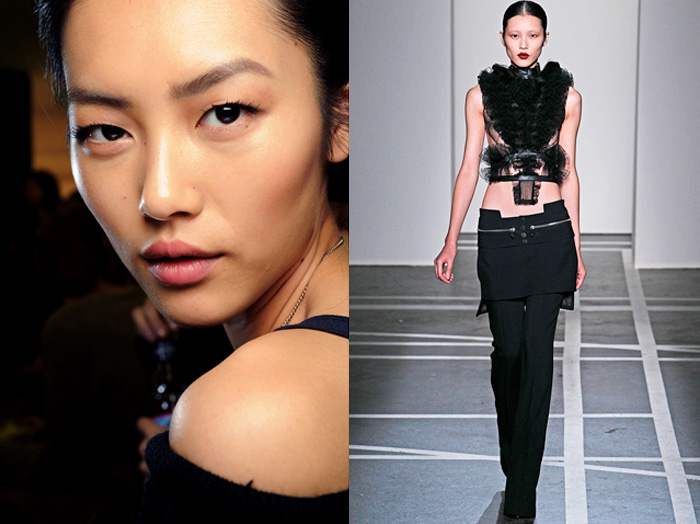 The one that stands out the most is being able to work for Tom Ford. I’ve heard of him and his work for so long, but I have never had the opportunity to actually model his designs since he was away from womenswear for so long. So I was incredibly thrilled to be a part of his return debut, especially because he chose such a wonderful variety of women, like Beyonce, Daphne Guinness, and Julianne Moore, as his models!

This is still a little relevant to fashion week, but I still wanted to share it. During Paris all the girls (Including me) love to ride on the backs of motorcycles to rush to shows, because there is often so much traffic and the subways can tire you. Even better, many of the motorcyclists taking us around are rather cute, , and they’re always very clear on exactly where we have to go. Some of the considerate/experienced ones even bring extra sweaters or blankets for the models who are not dressed as well for the colder weather. I appreciate them so much! 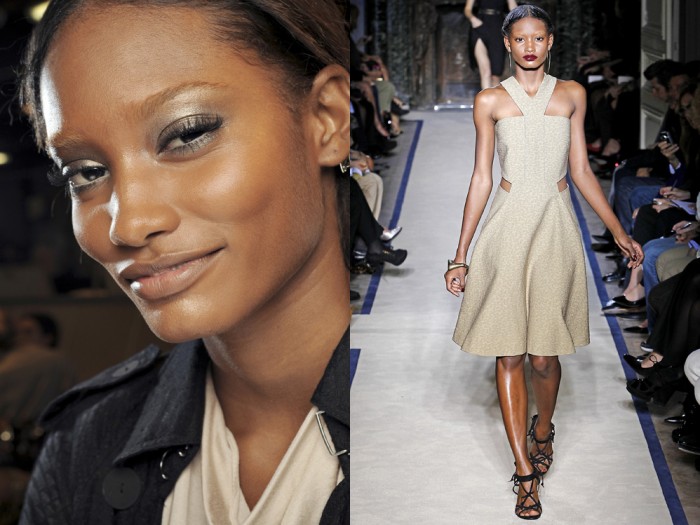 Being in the Yves Saint Laurent Show is by far my most memorable moment. I was one of the select few black models this season who had the honor to walk for ” La Maison Yves-Saint Laurent ” and I have always been a fan of the brand . It was very important for me! I also loved riding around Paris in a motorbike! I never thought I would get to do that!

The Return: Danielle Z
NEXT