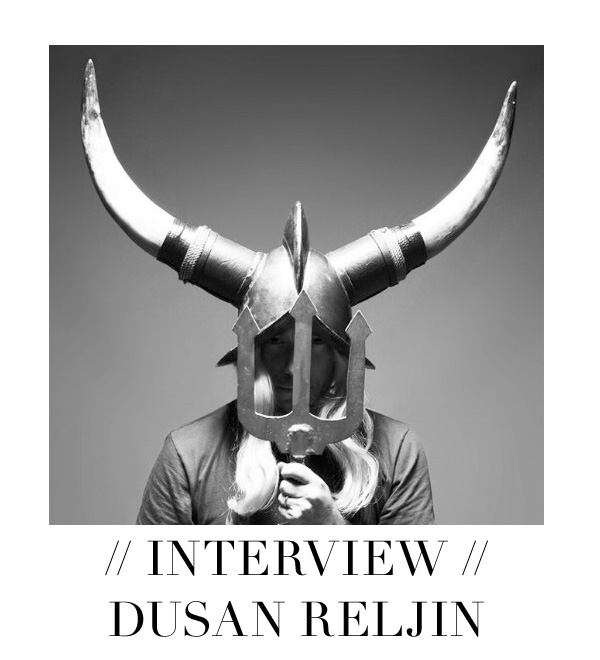 Life is a journey and for the fashion crowd the work is only half the story. Photographer Dunsan Reljin has been a tennis pro, Craig McDean’s assistant and now he is one of the industry’s rising photographers. Christopher Michael sits down with the man of the hour to find out more about his intriguing backstory and fast-paced career.

Q. Professional Tennis Player to Fashion Photographer, how does that happen?
Well, a bit of bad luck really. I got a knee injury and the recovery time took too long. When I recovered (6 months later) things where not the same, so I quit.
I always had an interest in photography since I was a kid, and my father always had cameras lying around. When I finished school I started assisting photographers and realized that this was something I could really get into. For my first job interview I was asked if I could process and print B&W film, I said of course, even though I had never done it before. My cover was blown pretty fast, but my employee gave me a second chance. I spent all of my time processing film until I could do it blind folded. Then there was no turning back, even though now I miss tennis quite a lot. My friend who I used to train with before just won the Wimbledon in doubles for the second time in a row…

Q. I have always believed that people whoâ€™ve lived in the presence of other cultures prior to arrival in the big apple seem to have something extra, something different. Which for obvious reasons is why the majority of our industry is composed of people from all over the globe. As someone who grew up in Serbia, then Norway and eventually re located to the US, what has influenced you in regards to your creative edge or vision that you affiliate with your time spent in these other countries..?
The beauty of it is that it makes you a more open minded person. You accept things faster and you can adapt to other cultures faster. As a child I also lived in Australia, so for me it is very hard to identify where I am exactly from. I think the Serbian side goes very deep but is finely balanced with the very mellow Norwegian side. It definitely helps with the creative edge, since your background and history identify you as a person, which allows you to interpret and express yourself in a unique way.

Q. What do you find most attractive about fashion? It seems you can ask 100 different people this question and you will receive 100 different answersâ€¦ as someone who has made a career out of capturing this business all in the magic of a moment on camera, Iâ€™m quite curious to hear your answer on this one..
What I like with fashion is that it has so many layers. It reflects society and again it can inflence a society. It gives you the freedom to interpret and create your own world in the collaboration of the designers, stylists, make up and hair artists. It is like being a kid who never grows up and you are never bored.

Q. It is the Tale of almost any successful fashion photographer to have assisted someone really big in the business prior to branching off on their own, it was your assisting Craig Mcdean that initially brought you to the city no? What do you think you learned most from working with him that we might see in your own work today..
I was very lucky to have assisted someone like Craig. He is one of the best photographers at the moment and he takes beautiful pictures. Before I started working with him I had no knowledge of the industry at this level, so he introduced me to everything. I guess the thing I learned the most from him that I always apply is to never give up until you are satisfied.

Q. Your one of the multi tasking family guyâ€™s who has managed to quite rapidly build a successful career in the business and yet you manage to maintain a family as both a Father and Husband. Iâ€™ve discussed this very same question with Nicoletta Santoro but itâ€™s no secret that women are better known for their ability to multi task. How have you managed to devote the time necessary to your rising career and to that of your own family?
Luckily I don’t need much sleep! I am easily inspired and I really love what I do. I also have a wife that is fully supportive of me as a husband and a photographer, which makes things easier. You need to know your priorities and to divide the responsibilities. I guess structure is just as important especially when having 3 kids.

Q. Your beauty stories always contain very interesting make up decisions, how do you go about deciding who you work with for those elements of your team?
When I started I worked with the artist Vanessa Beecroft and was very impressed how she used make up in her art. It was always very refined but unexpected. It has influenced me a lot in how I perceive make up, I always want the girls to look beautiful, original and in a character. I usually work with the same team, which is helpful, since they know by now what I like and I know what to expect. I like creative people who are technically good, but have a sense of humor. I do like developing ideas with the people involved and am open for suggestions.

Q. What do you find to be the greatest benefit of the way our business has been effected by the ‘crisis’?
It has developed alternative ways for people to be creative. It is very exciting and fascinating and in the long term will be very influential in how the industry is perceived. I personally have gotten more involved in video and music than before.

Q. It seems French and Dutch girls have started to invade the territory once ruled by the Russian and Brazilian models, whatâ€™s your take on such a change..?
Like anything else it is a cycle. It could also be a sign of the times. At this point I think the French and Dutch girls offer more of a deeper beauty and reflect what fashion is going through.

Boy On The Verge