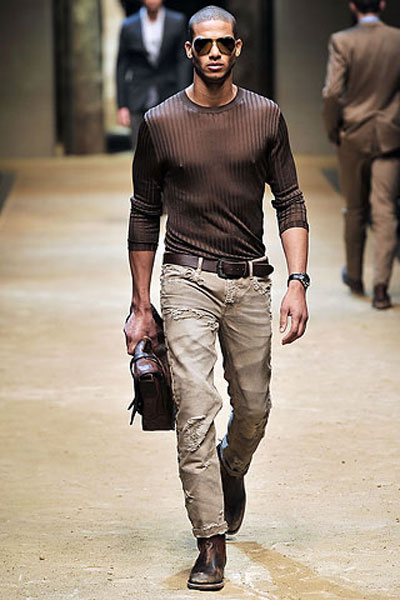 Milan was awash with color and we don’t mean on the clothes. After last season’s dismal lack of models of color on the runway and the subsequent Guy Trebay article in the Times (Mr. Trebay called it a “Whiteout”), men’s show week in Milan has responded with one of the most diverse seasons in recent memory.

17 of the industry’s more recognizable and new male faces of color were at the top shows. The most notable was relative newcomer, the handsome David Agbodji opening and closing Calvin Klein, a homerun for any new model. Another top face was Nate Gill the beautiful young American model walking in 6 shows in Milan his first season. Three (yes, count them 3!) Asian models had a presence in Milan. Runway regular Philip Huang was joined by Allen Tsai and newcomer Simon Tham who closed Bottega Veneta.

Bottega, along with Gianfranco Ferre, Gucci and Missoni (4 of the brands whose runways were marked by Mr. Trebay last season as notably lacking in color) DID include various models of color this season. But Burberry, Jil Sander, Prada, Roberto Cavalli and Trussardi? Still nothing.

Maybe they should take a cue from Calvin Klein, one of the most successful and recognizable “brands” in the world. The Calvin brand has not only embraced inclusiveness (witness the current cK One fragrance campaign and cK F/W 09 campaign), the men’s and women’s shows actually make an effort to discover and support new faces of color (Lyndsey Scott, Courtney Taylor and Henry Watkins are three that come to mind). Versace and Giorgio Armani are 2 other iconic brands that also have a great mix of models.

We absolutely understand that the other designers may have a certain “aesthetic” in mind when it comes to their brand but in this market, the buying public holds the key to these luxury designers’ continued success. If the customer feels like the designers can’t be bothered to make an effort to show a range of faces, the customer may just decide to spend their dollars with brands that do. And while these 17 models (with about a dozen more not listed) are a fraction of the 300 plus models in Milan, we hope that they are at the forefront of a generation of models that won’t consider this an issue anymore.