Fashion is an all-encompassing passion for those who work within the industry but some of the business’ most interesting talents express themselves beyond the boundaries of fashion. Case in point casting director, Daniel Peddle, who along with Drew Dasent of The Secret Gallery, Inc. casts high profile shows like 3.1 Phillip Lim, Givenchy and Suno and is also an accomplished director, whose documentaries have garnered attention internationally. His latest film and first foray into narrative is the suspense filled, Sunset Edge. We caught up with the very busy man to talk cinema, casting for fashion week vs. film and how he balances his two careers.

When did you first get the idea for Sunset Edge?

DP: After making my first two documentary features, The Aggressives, (2005) and Trail Angels (2010) and years of discovering talent as a casting director coupled with a lifetime of painting and art-making, I was yearning to make my dream come true to make a narrative feature and utilize all my skills as a storyteller. My Mom and Dad discovered “Sunset Edge”, this abandoned trailer park in the rural South near my childhood home, and when I saw it, I knew right away I had found the “stage for my play”. That fated day, I was with my then fifteen year old nephew, Jacob and a couple of his life-long buddies, who skateboarded and poked about. Their frail adolescence against the rotting remains was so rich with creepy possibility. That night I started writing the script! Unlike most of my projects, I finished writing the screenplay in just over a month. Then I started approaching various people for funding and production support and of course that proved fruitless and frustrating! So I decided “I’ll just do it myself!” Life is too short to wait on the gatekeepers…

Without giving too much away can you describe the basic plot for us?

DP: Well it is really two stories that clash violently in this graveyard of abandoned mobile homes. The first tale is a nostalgic thrill ride of peculiar normalcy for four disaffected suburban teenagers. A lazy afternoon is spiked with a “Suicide Soda” – a heady brew of cheap pop and energy packets. After skateboarding the park, the teens disperse and crash …alone. But someone is watching. Playing tricks. Our teens are completely unaware that this park is where a lonesome boy is confronting a horrific past. The second narrative surfaces like a repressed memory. The protagonist is a social outcast being raised by a strict and isolating grandfather who keeps from the boy his true identity. When the two stories merge, the secrets of Sunset Edge are revealed in a paralyzing finale.

The trailer has this wonderful suspenseful vibe, how did you go about creating that onscreen?

DP: It started from my research trips to the location. I would go out there at dusk and just wander the road listening to doors creaking in the wind and distant dogs barking. Considering my experiences making documentary films, I realized our goal should be to “capture” this place. My right hand man on this project Karim López (who was both the Director of Photography and Editor) and I worked together to “document” the inherent creepiness of the locale. We really let the place speak to us. Karim was also extremely strategic with camera choices while maintaining an incredible flexibility. There were so many moments when we would be shooting one thing and switch gears to grab something fleeting.

How does your connection to fashion inform your work as a filmmaker?

DP: One thing I really appreciate about fashion is that it is largely a wordless enterprise. Runway shows rarely have dialogue. Fashion editorials don’t use text. You watch an amazing perfume commercial and there will be like one word whispered at the end! This film also has very limited dialogue, so every silent image had to speak volumes symbolically and graphically. My partner, Drew Dasent, created the costumes for the film and they have a very quirky and iconic vibe that emphasizes the characters personality. 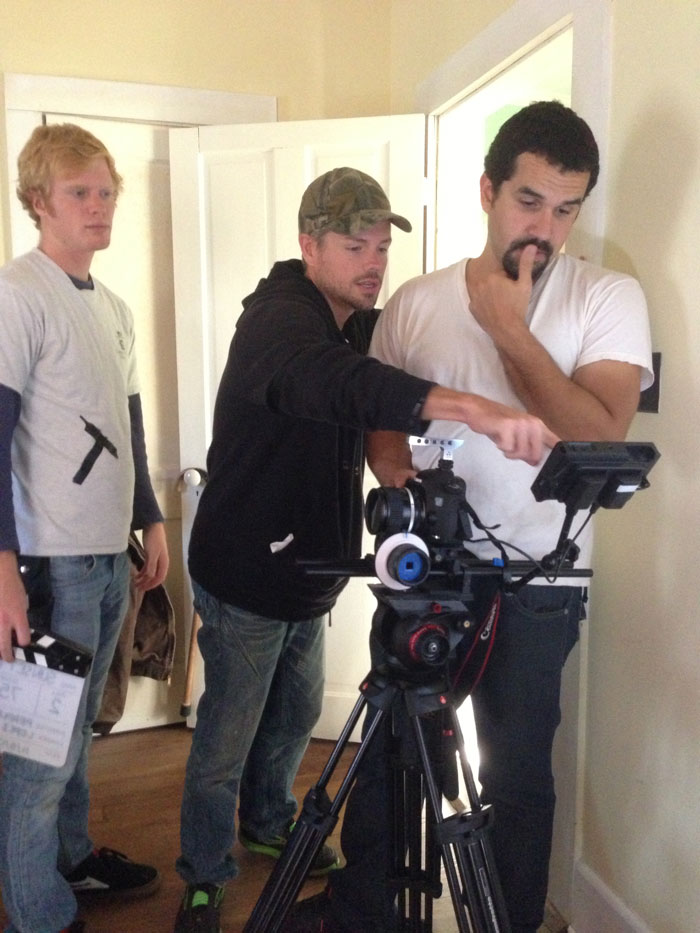 Tell us a bit about the casting of the film –  were there people you had in mind for some of the roles or did you start completely from scratch?

DP: I really wanted the film to have this “local and organic” feeling. The way I came to casting for fashion was as a film student street scouting, so this was a full-circle moment for me! I knew I wanted to go and discover my cast down South. I wanted this extreme realness and to that end, I decided to use “non-actors”. It’s a big risk and rarely done but it worked well for us. The hardest person to cast was Dora, “the last tenant of Sunset Edge”. In the film it is unclear if she is a ghost or still living there but from the outset I kept having this vision of an older woman with long grey hair. It turns out that’s not really the style of the South where women of a certain age tend to have rather coiffed hairdos. I conducted a rather exhaustive search but by the night before the shoot was to start, I still had not found my Dora. I was heading home to write the character out of the script when I stopped at an ole-timey grocery store I used to go to when I was a kid. The last time I had been in there was probably when I was ten years old. Anyway I go in there to buy some batteries and low and behold in front of me at the register was this beautiful mature woman with a long braid of thick white hair! I could barely contain my shock! I approached her and it turns out she is French and had been living down South for over fifty years as her husband had been a US Marine. So I regaled her with tales of my frequent trips to Paris for work and I think that put her at ease. She said yes she would be my Dora! It was literally like a miracle!

I see you also handled the production design on this – what did that entail? The settings look so authentic.

DP: Well even after over twenty years in NYC, I still consider myself a country boy! I grew up in a rural world and I wanted the film to have this über pastoral feeling that I associate with my youth. Its actually harder to come by now with all the suburban sprawl that has taken over much of the South, so we did a lot of location scouting and were very selective with our choices. I had this notion that I wanted the film to have this painterly quality, as if you were stepping into one of my paintings. So we were very diligent about composition and palette. Another rather risky choice we made from the outset that greatly informed the look of the film was to not use any lights whatsoever. The entire film is shot with natural light. That posed some serious restrictions but the outcome speaks for itself.

What is the most challenging or rewarding part of translating your vision for the screen?

DP: Wow! I would say every aspect was a challenge! Besides working with all natural light, we had to shoot around five teenagers’ school schedule! Luckily over the 4 weeks of shooting, we did not have a single day of rain! And of course we were working with an extremely low budget and a skeleton crew. Basically we did the impossible! I think the biggest reward was the experience of working with Karim, the cast, crew and my family. It was an incredible struggle and I think it bonded us for life! So whatever does or does not happen with this film, for me personally the rewards have already been reaped! I feel like I dreamed this movie up and that it actually exists now on film is just nothing short of a miracle.

When can we expect to see the film in theaters / will you be hitting the festival circuit with the project?

DP: We are sorting that all out now! Hopefully it will be available on various online platforms by the summer. As far as festivals, well fingers crossed!

On the Street: NYFW Day 3
NEXT