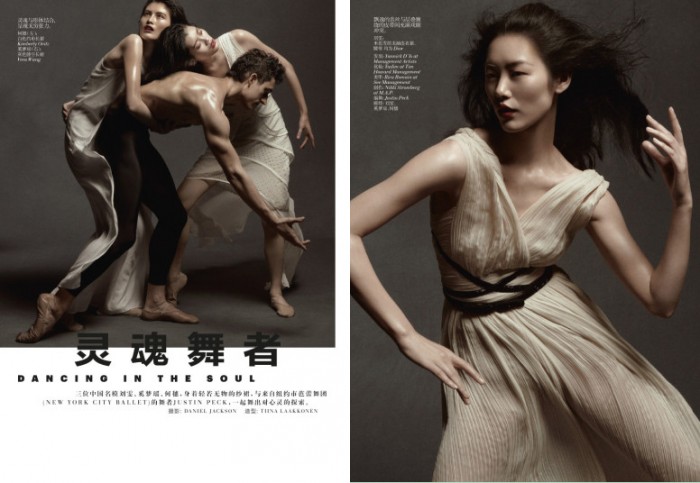 It is not often that you see a choreographer nestled among the credits in a fashion editorial, but that is exactly where you’ll find Justin Peck in the latest Vogue China. The rising dance-maker and New York City Ballet corps member appears this month alongside Chinese supermodels Liu Wen, Sui He, and Ming Xi in “Dancing in the Soul,” a story filled with ephemeral pastel-colored dresses inspired by the Wim Wenders documentary Pina. The images by Daniel Jackson are reminiscent of the stark classicism of the middle of the last century, with bold imagery evocative of Avedon and Barbara Morgan’s iconic portrait of Martha Graham. Peck, who will be débuting two works with his home company later this year, spoke with OTM recently about choreographing around the clothes, the rigors of working with non-dancers, and bringing out the girls’ different personalities through motion. 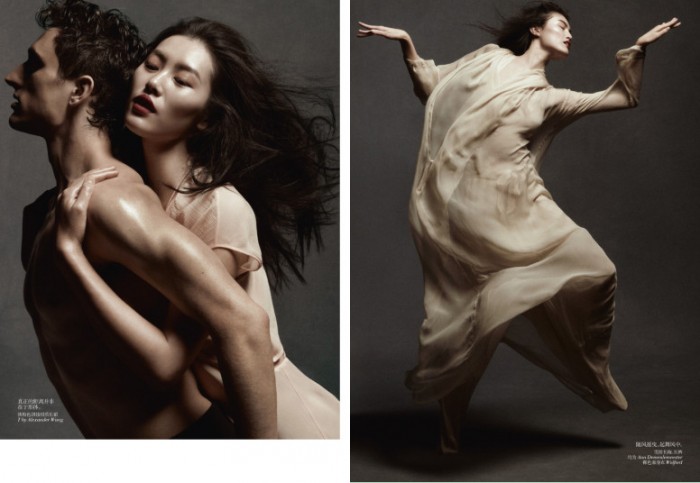 MDC: How did you become involved in this project?
Justin: Daniel Jackson’s agent got in touch with me through my website and asked if I would be interested in working on a shoot for Vogue China with Dan. He said that they were interested in having the models being seen as dancers, and that the inspiration for the shoot was rooted in the Pina Bausch film that had come out recently. Originally I was just supposed to work with the models and create some sort of movement for them that they could photograph, but a few days later they got in touch with me again and asked if I would be willing to participate in the shoot itself and be photographed with some of the women.

MDC: How did you prepare the choreography for the shoot?
Justin: There wasn’t a lot of background work to prepare for it, but I did review the Pina Bausch film beforehand. Since that’s the look that they were going for—and it was very much apparent in the clothing too—I wanted to make sure I could pay my respects to Pina’s work while at the same time maintaining my own voice and my own vocabulary of movement. When it came to the shoot itself, there was a lot of preparation beforehand, choreographic work done with the models. I spent twenty to forty minutes with each model just working through some movement and refining the details, attempting to make them look like actual dancers, which I think was one of the biggest challenges for me, especially the details like the hands—how dancers hold their hands is a very specific and distinctive aspect of the dancer look. So I spent a lot of time coaching them on these aspects before we got in front of the camera. And since they’re models and they didn’t have any training in dance, it was a relatively slow process. I had never worked with non-dancers before, but hopefully it paid off. 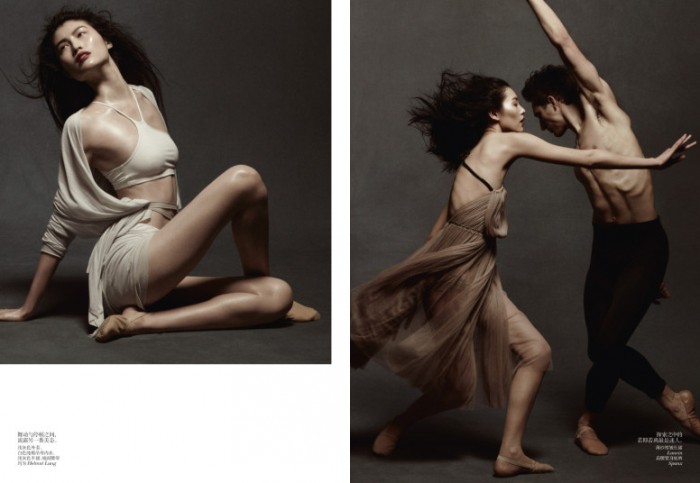 MDC: What were some of the other difficulties you faced working on this shoot?
Justin: My greatest goal was to make it look like movement in the photographs. I didn’t want it to look like a pose, I wanted it to look like actual dancing, actual movement taking place, and I think that’s a very challenging thing to accomplish. We boiled it down to the better images, but a lot of them ended up looking too pose-y, so I think we had to really focus on the in-between movement of the choreography.

The clothing was definitely a challenge. Certain pieces of clothing move in very specific ways, and the shoot directors would tell me “We want this dress to move in this certain way, can you make that happen through some sort of step or choreography that you can give them?” And so I would have to think off the top of my head and come up with something that really showcased specific qualities of each piece of clothing. Some pieces were hard to move in, some of them were very restrictive for the models.

MDC: How did the models react to the experience?
Justin: They were great, they were really fun to work with. I don’t know what they’re like on other shoots, but it seemed like they were a bit more inspired to work on this shoot because it was stimulating for them, it wasn’t just a traditional photoshoot. There was more that was being asked of them, and I think they responded well to that. I think that they approached the experience with open minds and hopefully they had a good time working on it. They were all very professional. I think they enjoyed themselves.

MDC: Did you notice different dancing styles between the three models?
Justin: We would joke around with the models about how they had different approaches to dancing. Ming Xi was the feisty one, she was a very aggressive mover. Liu Wen was really classic and really smart about the way she moved. And Sui He was just beautiful. She was actually I think the best mover out of the three, and I think that she was the most interested in dancing. It was nice to see the different personalities of the three come out through their dancing and their movement. 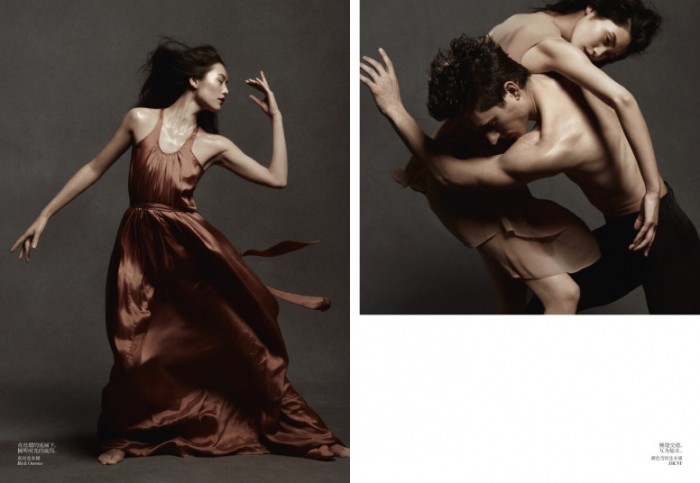 MDC: What was the working process like on set?
Justin: It was definitely collaborative. Sometimes I would give the models a phrase of choreography and it may or may not have worked for Dan, and he would ask for something else “Can we get them doing something on the floor? Can we get them moving their arm in a different way?” So there was this nice creative spontaneity on set, there were a lot of ideas bouncing back and forth. I think Dan really enjoyed himself too. It’s funny, while we shot, he insisted that we play ballet music, but not traditional ballet music, he wanted more contemporary, minimalist music. So it was a different vibe from your everyday photoshoot. We played a lot of Philip Glass, a lot of Michael Nyman, a little bit of Steve Reich, some John Adams, basically the big names. I think that was interesting for him. I can imagine it might get a bit monotonous at times working on photoshoot after photoshoot with the same music. He was really great to work with, and he was super-focused on what he was producing and really professional, but not uptight, not overly tense. He still had a nice laid-back nature to him, which I think helped to make everyone very comfortable on set. 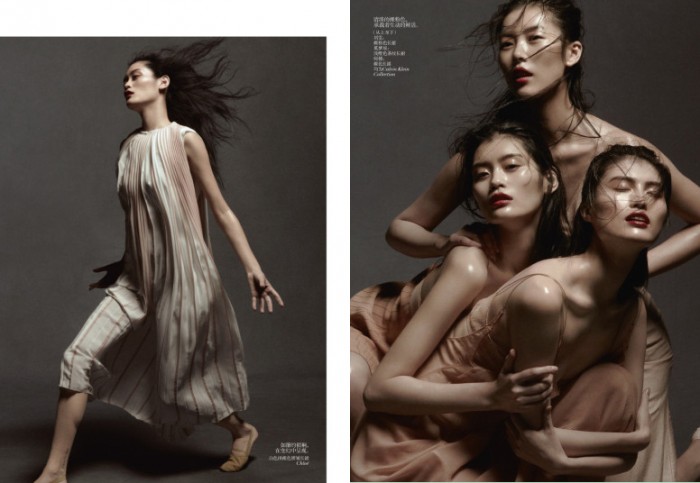 MDC: What other projects are you working on now?
Justin: I’m working on a few choreographic projects. Right at the moment I’m working at the New York Choreographic Institute on a new ballet. I’m in residency there over the next year. It’s a new position that they created, which is nice because I get a chance to work with New York City Ballet and School of American Ballet dancers on new ideas and new concepts. Later this spring I’ll be working on a new ballet for New York City Ballet that will have its première up at Saratoga Springs in July, and then we’ll tour to Jackson Hole and Vail. That’s a ballet for eight dancers set to Philip Glass’ “Four Movements for Two Pianos,” a chamber piece that he wrote a couple years ago. I’m also collaborating on a ballet with Sufjan Stevens, who’s orchestrating his Enjoy Your Rabbit music cycle for string orchestra and percussion. That’s going to première at New York City Ballet in October.

I’m very excited about both pieces for City Ballet, but I think I’m most excited about the Sufjan Stevens collaboration just because it’s been a long time coming. The music is really something that inspires me, and I get a chance to work with the composer himself—he’s still living—so that’s very exciting. It’s something that’s been in my head for a few years now, so it’s kind of a dream come true to have that become reality, and to have New York City Ballet perform it. There’s no other company I’d rather be choreographing for.