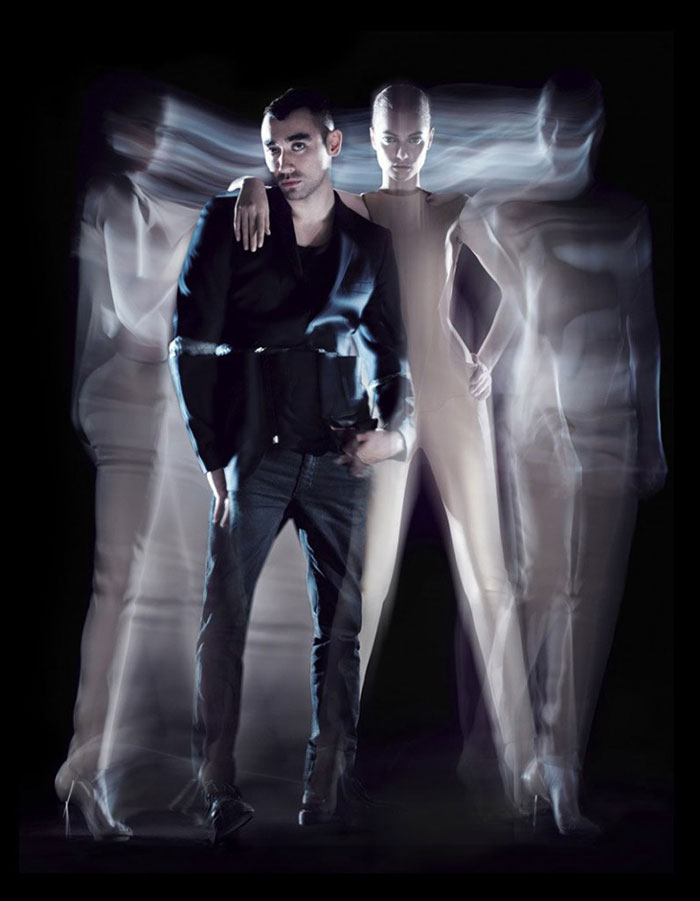 As the creative director of Mugler and fashion director of Vogue Hommes Japan, Nicola Formichetti ranks among the most influential and busiest men in all of fashion. Whether he’s shaping the look of your favorite pop star, creating striking editorial imagery, or setting catwalk trends Formichetti remains on the pulse of what is relevant in the industry, all while remaining down to earth and appealingly unaffected by his iconic status. During PFW, Team MDC stopped by Mugler headquarters to speak with the man himself about that new handbag line, what he looks for in a model and of course, that stunning S/S collection. 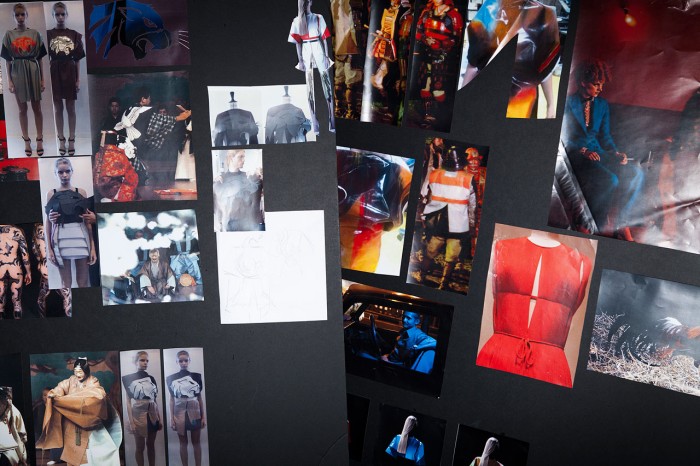 The inspiration board backstage at Mugler S/S 13 – all show images by Dirk Alexander for Models.com

MDC: What was the vibe for this season?

Nicola: I like the idea that we live in a digital world and we can get our inspirations from whatever we want. There is a loose feeling of Asia again, but for me Asia is not a trend. It’s where I’m from and there is always this kind of urge to jump into that – this time was more about travel, I’d just been to Indonesia and Bali, there’s lots of that in the collection, but it is more of an abstract thing. There are dresses that sort of resemble lanterns, in terms of the warm colors and shapes. Saying all of that, this season was really more about getting back to what girls want to wear.

Before it was more about structure and silhouettes, very fantasy oriented, but now it is about cool t-shirts and dresses, a hot skirt and culottes. Handbags even. 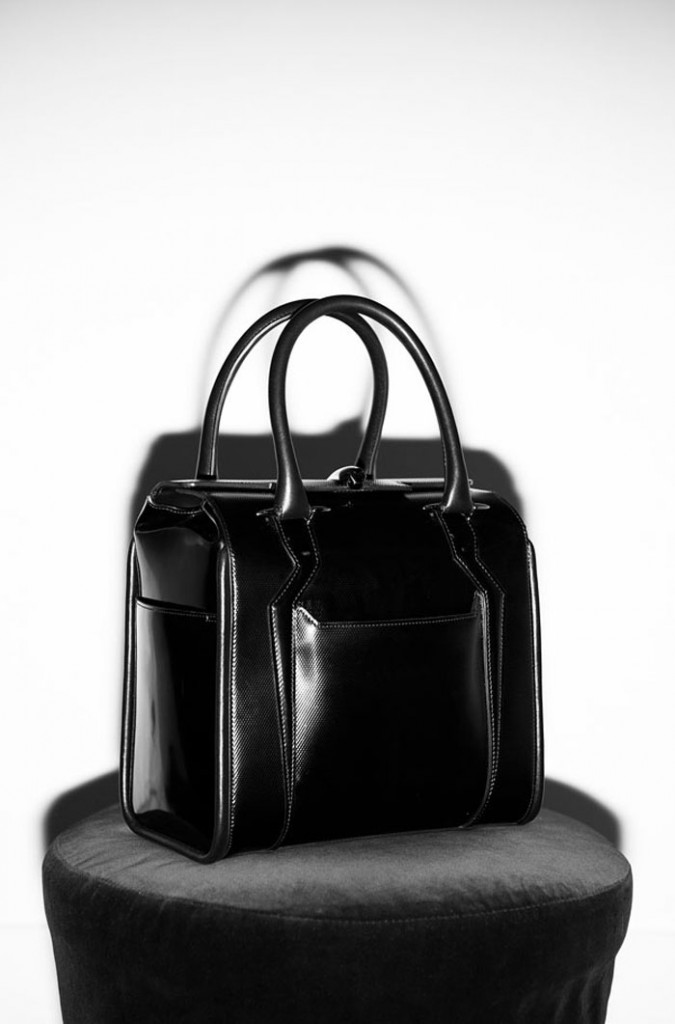 MDC: Tell us a little about the new handbag line – we’re excited to experience it!

Nicola: This is the first time we’ve done bags, I used to hate bags. I didn’t understand why girls had bags, all my girls are obsessed and I just didn’t get it.

Now I’m obsessed with bags, I just found this whole other side of the industry, this world I didn’t know about. There are whole blogs just about bags! It is insane, women are so dedicated and so into bags. We have these crazy silver clutches – they’re called Naboo, it is a nod to Star Wars. They’re like a spaceship, clutch, weapon. Our key bag, is called the Agent. It is like a vanity bag, that kind of size- but basically it is like a little Bento box – you could eat out of it.

This has a bit of a retro feeling, my mom wears these tortoise shell sunglasses. You hear that word and you think Jackie O. or someone like that. We wanted to keep things minimal, but there are also times when you go to a vintage store and find some cool thing, then just mix it in with your wardrobe. For me this was my retro moment – but we Muglerfied it.

In a way it was good for us to do bags, it makes the brand more approachable. Before we were a little too far away, with our whole sci-fi, fantasy thing, but now we’re getting more urban, more street. It is all about cool girls and what we see on the street, but done in a kind of Mugler way. Bags really helped to connect things and really open things up to a wider range. It is still kind of sophisticated, but super simple compared to before. 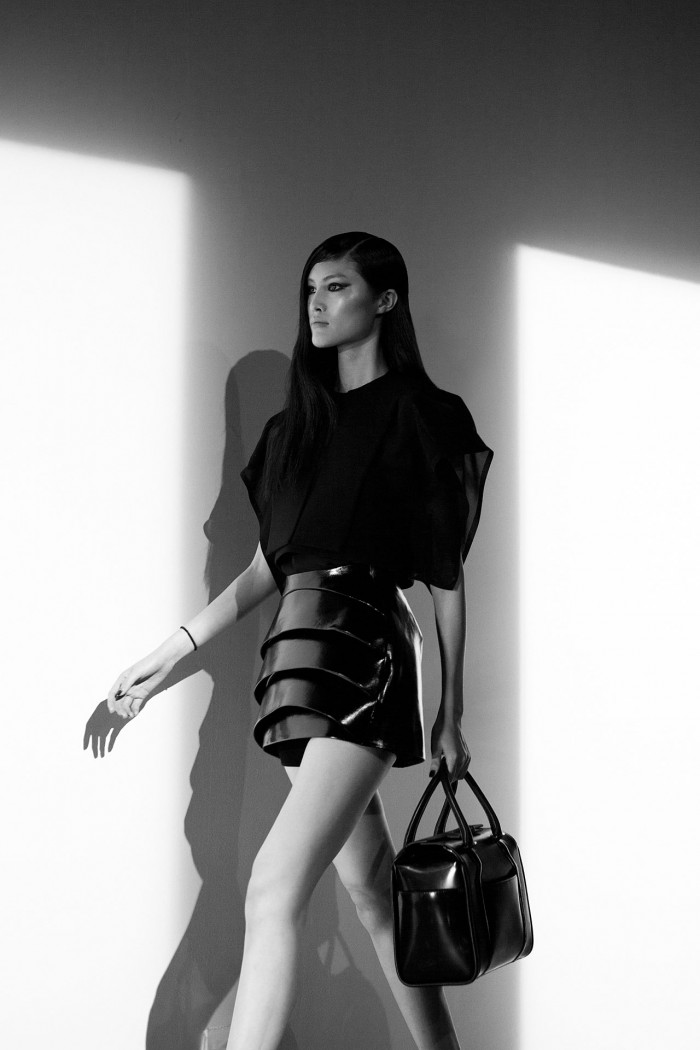 Sui He walking the Mugler runway

MDC: Is there a woman you envision when you create your collections?

Nicola: Just all my friends, all my cool friends. Gaga of course she’s doing music and she’s given us her new song Cake, that we’ll be launching at the show. There is going to be a rap – it’s very hip hop, not like real hip hop, but it is cute hip hop. For me Azealia Banks is hip-hop and she’s here too.

I always like to go for a real fantasy and if people want to wear it, cool – if not, who cares. Of course I do want to see those girls in my clothes and I’ve been thinking about all the different types of girls who could wear Mugler. Thinking about them really made things a bit more interesting.

MDC: How are things different for you this season?

Nicola: Maybe I feel much more confident at this point, we’re comfortable with what we’re doing feeling much more relaxed. We’re at a point where we don’t really have to prove anything anymore. We’re doing really well, preparing for next season, launching the stores. We’re going to start advertising – we’re actually shooting the very first campaign after the show. Slowly but surely it is getting there.

MDC: What’s next for Mugler?

Nicola: We’re looking for Paris for sure, but we want to do something in New York. We haven’t found the right permanent store in NY, but I would love to do something for a Christmas – a pop up store with the bags. That’s the good thing about bags too, it doesn’t take six months to produce.

MDC: The cast was incredible this season – what do you look for in models?

Nicola: This season there are a lot of amazing newer girls and I like supporting that, the depth of new talent. Of course I wish there were more Japanese models since I’m from Japan, but there are a lot of beautiful Asian girls doing well right now, which I love. I feel like I’m seeing less Americans this season, less Brazilians. I like Julianna S and a few others. I like girls who are really cool when they come in, without styling, without hair or makeup – they’re just cool naturally.

Enter The Room
NEXT