Zegna Group Buys Majority Stake in Thom Browne
A win for independent designers, conglomerate Ermenegildo Zegna Group has bought a majority stake of the dandy man’s sartorial dream, Thom Browne for an estimated $500 million dollars, acquiring 85 percent. The move makes Browne, who founded the brand in 2001, the other sole shareholder with the business remaining independently run, a rare feat. [WWD]

The First Spotting of the new Céline
Do you see the white smoke? A new creative director is here. If by white smoke you mean a newly designed bag, then yes Hedi Slimane has arrived at his newly appointed post at Céline. This week he’s outfitted BFF Lady Gaga with his new silhouette for Céline accessories as she rolled out her press tour for the feel-good remake, “A Star is Born”. Mums the word on what we call this new leather baby but it’ll surely be the newest, covetable item on the street style block.

‘Botter’ Duo Rushemy Botter and Lisa Herrebrugh Named Artistic Directors at Nina Ricci
Newly minted artistic directors Rushemy Botter and Lisa Herrebrugh are to take their post overseeing Nina Ricci’s women’s RTW, starting immediately, WWD reported exclusively. The duo, who garnered buzz from their menswear collection “Botter”, earned their design accolades winning the Première Vision Grand Prize at the Hyères International Festival of Fashion and Photography and were finalists in LVMH’s 2018 Young Designer Prize. WWD states their first collection for the Puig-owned brand Nina Ricci will be pre-fall 2019, followed by a spot on the Paris’ Fashion Week calendar for fall 2019. As such, they will relocate from Antwerp to Paris bringing along their young brand, Botter. José Manuel Albesa, president of brands, markets, and operations at Puig, told WWD, “They have this kind of Caribbean joie de vivre. It’s very appropriate for the brand, and it’s extremely appropriate for the times,” continuing to say, “They did some sketches to show their vision for the brand, and I was really amazed because it was not an evolution, it was a revolution.” [WWD]

Menswear From The Row Coming in October
Ashley and Mary-Kate Olsen’s The Row announced menswear will be introduced into stores and select retailers in October. Vogue reported via a studio visit that the men’s pieces will be synchronous “taste-wise” with their existing female customers, describing it as “minimal in feeling and finely, ambitiously made in remarkable fabrics with many hand-stitched details.” In a press release, Mary-Kate said, “We want to be able to offer the menswear market those same core foundation pieces at a luxury level.” The same press release further illustrates the coming menswear offerings, saying, “Ashley Olsen and Mary-Kate Olsen combine the refinement of a classic bespoke experience with the precise minimal masculine style of New York specific to the 80s and the 90s.” The sisters launched their fashion line in 2006 out of New York and have since, rather quietly, carved out a considerable presence in the market. [Vogue]

New York Fashion Week S/S 19 Begins Next Week on September 6th
Stay up to date by tracking the CFDA’s official schedule. You can view the preliminary schedule below: 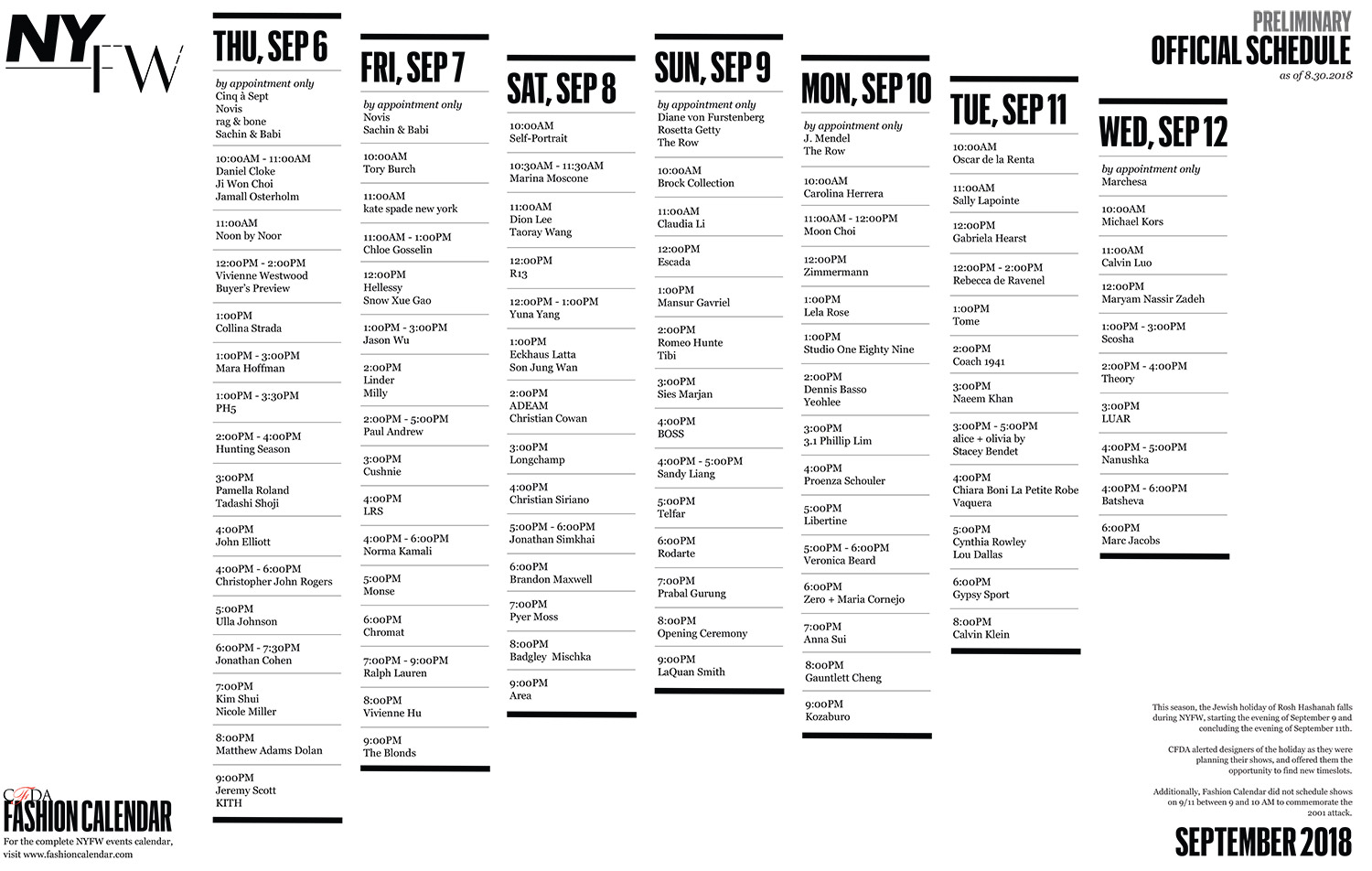 Renaissance Curls That Look Carved Out of Stone
NEXT Celine drops hints (and its accent)