Some girls have all the “umph”, that crackle, the shimmer that keeps those key clients coming back for more, precisely because they have a gift for leaving behind a trail of truly memorable fashion images. That feat takes not only a unique beauty, it also needs a powerful personality and these 10 women certainly made their presence felt in 2011. 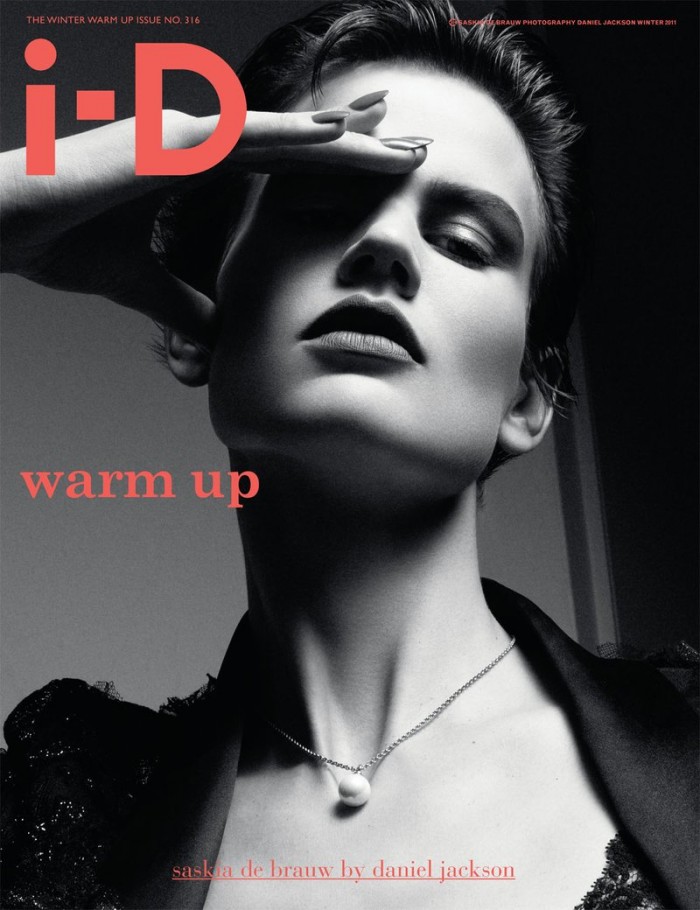 Saskia de Brauw
The emerging “girl” story of 2011 was undoubtably that of Saskia De Brauw who catapulted out of the group Givenchy SS 11 line-up onto the covers of V, Vogue Japan, Vogue Paris and Vogue Italia, as well as subsequent campaigns for Versace and Chanel. As her style.com magazine profile articulated, this striking Dutch woman has a full sense of her possibilities. It’s as she said in a most memorable quote, regarding her runway performances: “I walk for them. You hear your inside and you hear your blood flow.” 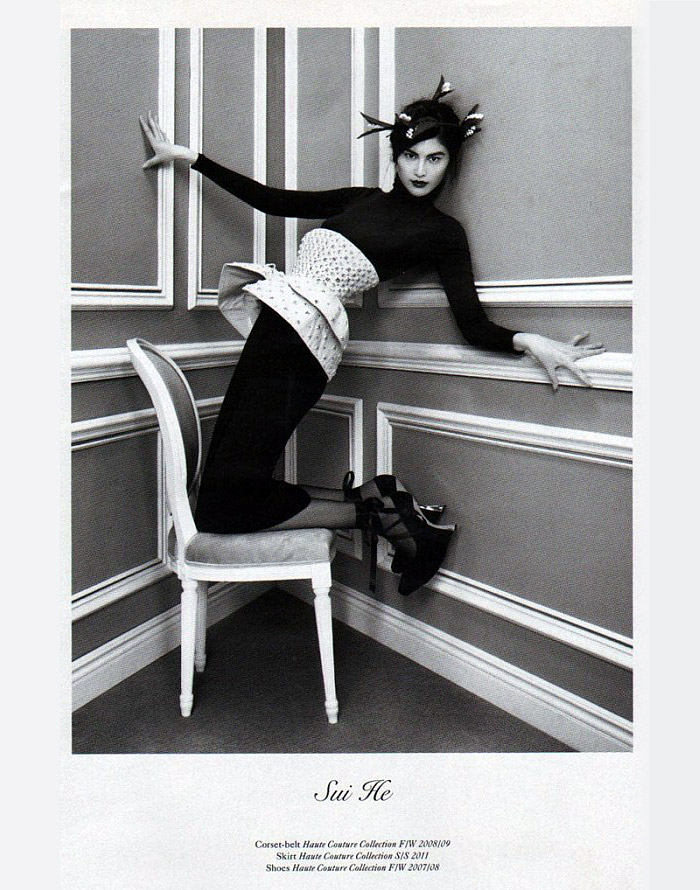 Sui He by Patrick Demarchelier for V Magazine November 2011

Sui He
The explosive career momentum of Sui He, on the heels of her opening slot at Ralph Lauren FW 11 and the ensuing campaign, is the story of a girl who has modeled for four years, quietly learning her skill set. Sui He combined the impressive feat of that big advertising endorsement, with a balance of high end editorial bookings with the very best photographers like Love magazine with Solve Sundsbo, a multiple girl Vogue China with Inez van Lamsweerde and Vinoodh Matadin and a memorable W cover culminating in her Carine Roitfeld endorsement cover for the Model Issue of V Magazine. And what accounts for that consistency? Sheer star quality. 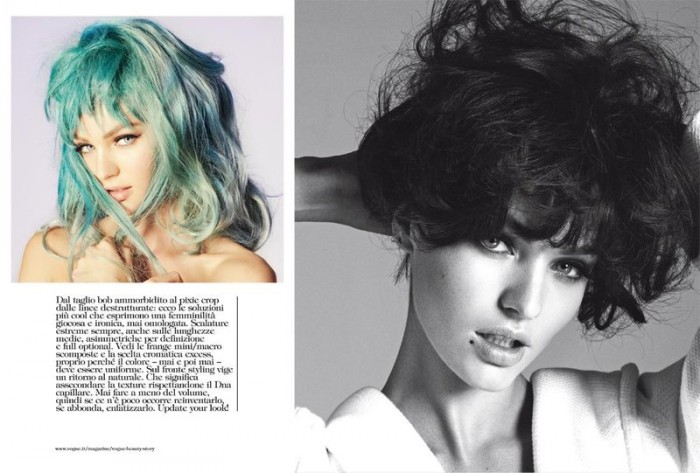 Candice Swanepoel
That sexy-to-editorial cross-over path forged by Miranda and Alessandra? It wasn’t a trend, it was a needed phenomenon to keep fashion and models culturally engaging. The big 2011 winner in those sweepstakes was the South African VS beauty who boomed all the way from a February Vogue Italia cover to advertising mileage for Versace, Tom Ford and Ralph Lauren, even as she kept things sizzling for her core brand, Victoria’s Secret.  That impressive run proved that Candice’s glamour quotient keeps on being compelling. 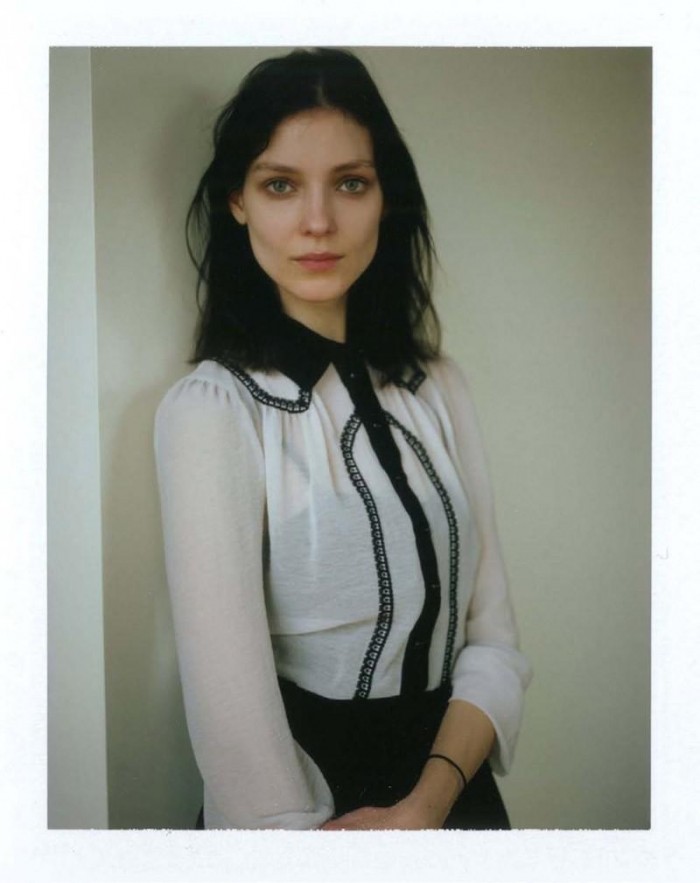 Kati Nescher
She is the hot story of the most recent season, coming off the SS12 Top Newcomers sweepstakes bagging beautiful Spring campaigns for Pringle and Vuitton. When this 27 year mother of a 2 year old stated to nymag.com‘s James Lim that “It’s not about age, it’s about personality” she issued a sentiment sorely needed in the modeling industry. That double booking in the Meisel camp also serves as a significant indicator that Miss Nescher, alongside her recently coined blue chip ad appeal, is being polished for a shimmering 2012 editorial run. 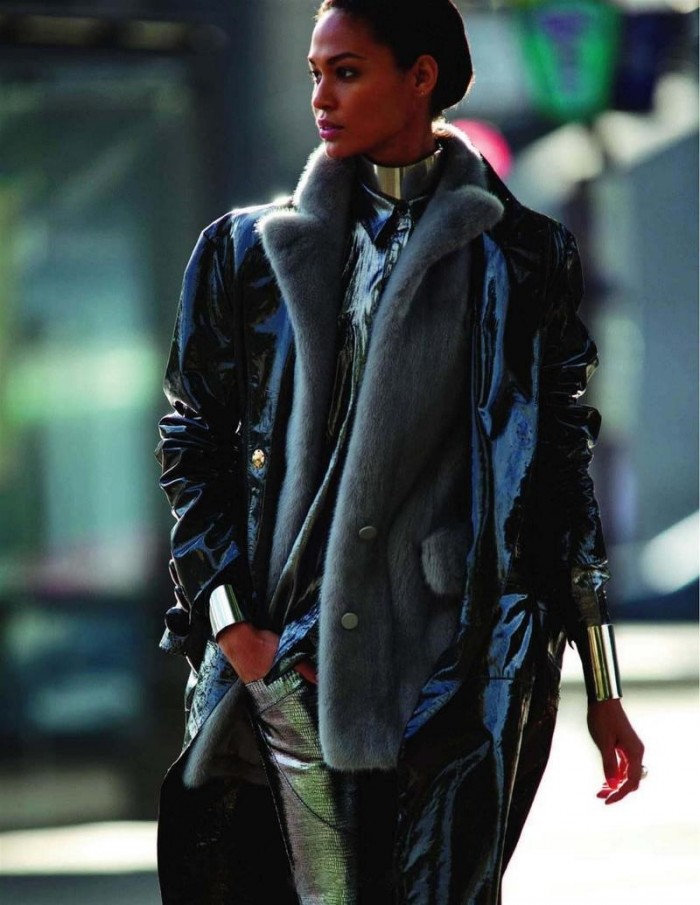 Joan Smalls
The leap into the Chanel campaign camp, countered by the big ticket Estee Lauder campaign and then the undeniable fabulousness of those editorials for V, Last, i-D, American Vogue and Vogue Paris made Joan Smalls in 2011, a sheer force of nature. Is it will to power? Compelling beauty? Whatever her secret, Miss Smalls continues to keep the blue chip brigade completely intrigued. Which means that girl now has more historic potential than ever before. 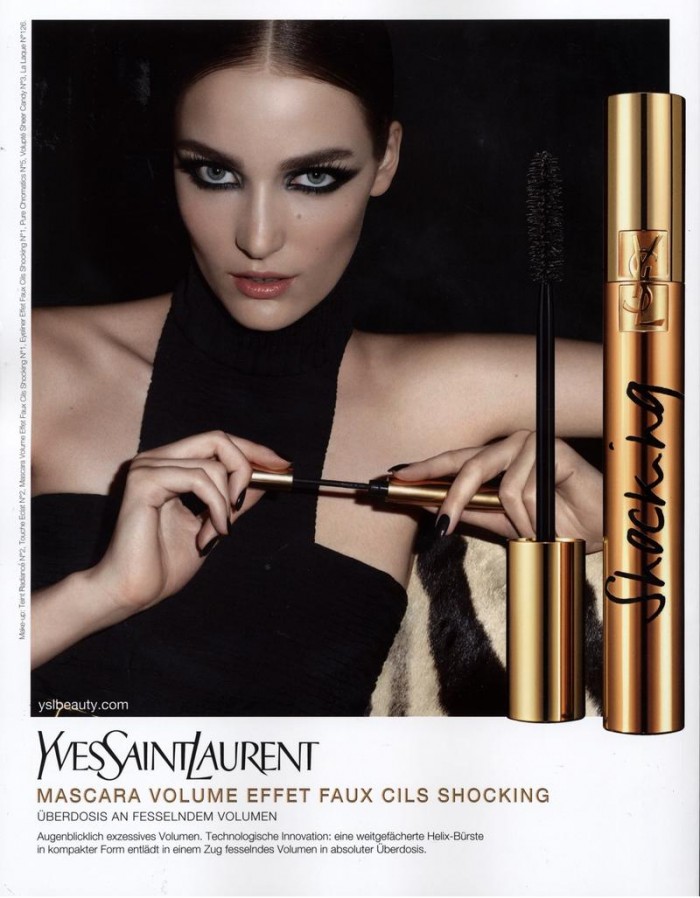 Zuzanna Bijoch
Polly Mellen, once said “Sometimes the girl has to be given time to find her style”. There is no truer expression of this sentiment than Zuzanna Bijoch, the 17 year old Polish stunner who in two short seasons has blossomed into one of the most coveted new girls of the moment. As a FW 11 campaign face of Louis Vuitton, Proenza Schouler, Chloe and YSL beauty as well as a Spring 11 face for Prada, Zuzanna’s elegant and sophisticated look has more than proven its luxury worth. But the critical thing about this photogenic beauty is that once she moves on set, Zuzanna is simply one of the best young models working today. 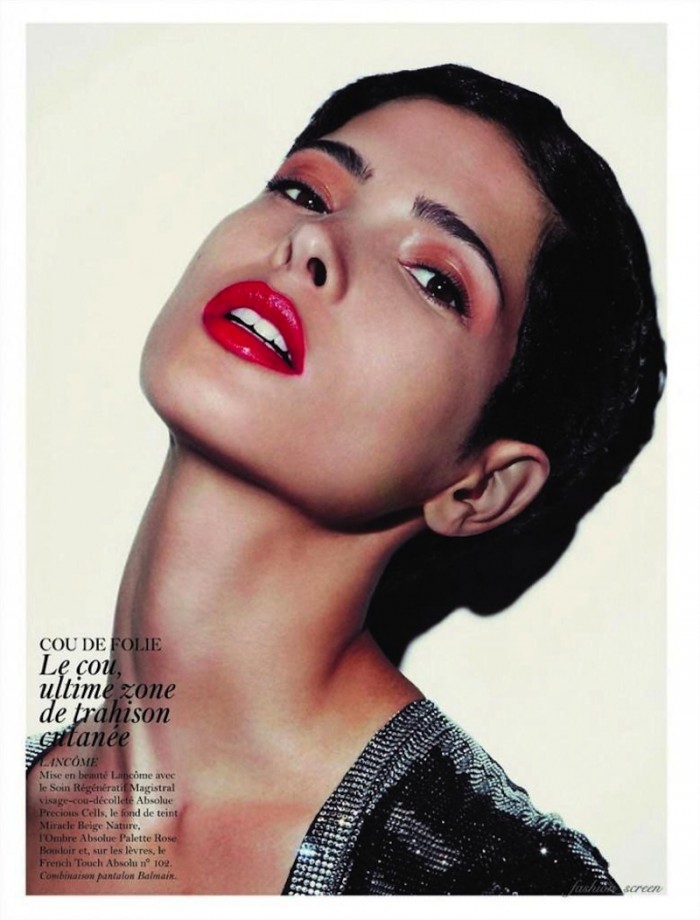 Hanaa Ben Abdesslem
The rise of this breakthrough Tunisian beauty has been a gentle bloom but 2011 was truly the year that Hanaa achieved maximum industry relevancy. That Lancome Visionaire ad nod was the campaign base that brought Hanaa’s V and Vogue Paris editorial support into sharp relief, even as she unveiled a very charming aspect of her gamine elegance in her models.comvideo interview. More importantly, this is a model in tune with the cultural significance of her career; one set to reach even more impressive heights in the coming year. 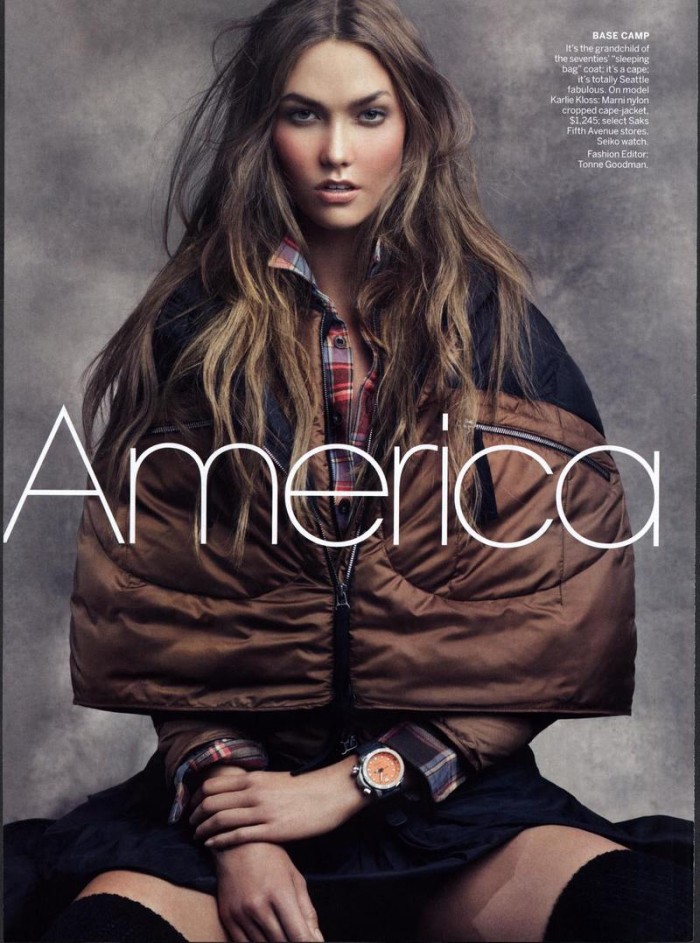 Karlie Kloss
Runway Karlie! Check. Editorial Karlie! Check. All-American Karlie… Soigné Karlie… Yup, prior to 2012 this St Louis native had all the bases covered. But Sexy Karlie ? And a sizzingly sexy Karlie at that too! Who saw that coming? Mr Meisel did and that Vogue Italia story was a game changer that touched off an amusing lnternet storm about retouching and removed pictures. Thank God for the truth of video and in any case that Kloss stomp down the VS runway signed, sealed and delivered this girl into the 2011 winner’s circle. 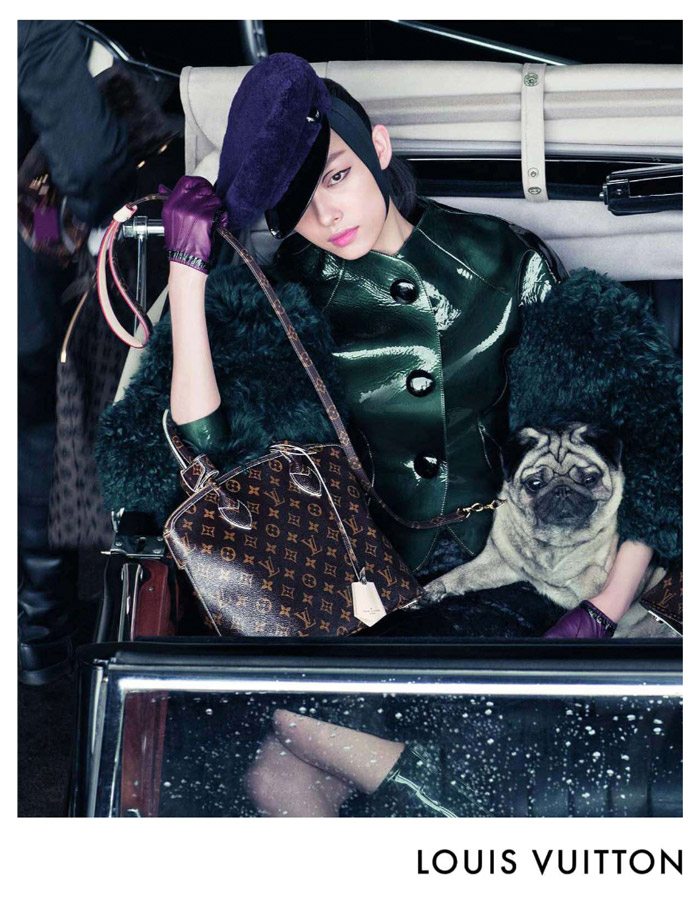 Fei Fei Sun
She is now an epitome of modern, cool, effortless elegance.  Amongst the rush of Chinese models moving onto the market, Fei Fei has transcended trends to simply be one of the must-book girls when clients are looking for a model who makes a picture simultaneously chic and contemporary. With a campaign range that covers cK1, Vuitton, Lane Crawford, DSquared2 and Valentino, Fei Fei’s striking beauty also ignited in 2011; several stand out editorials in Vogue Italia, i-D, W, Vogue China, Vogue Paris and American Vogue, prove that this girl is far from a fad. She’s blossomed into a essential fashion fixture for all the right forces. 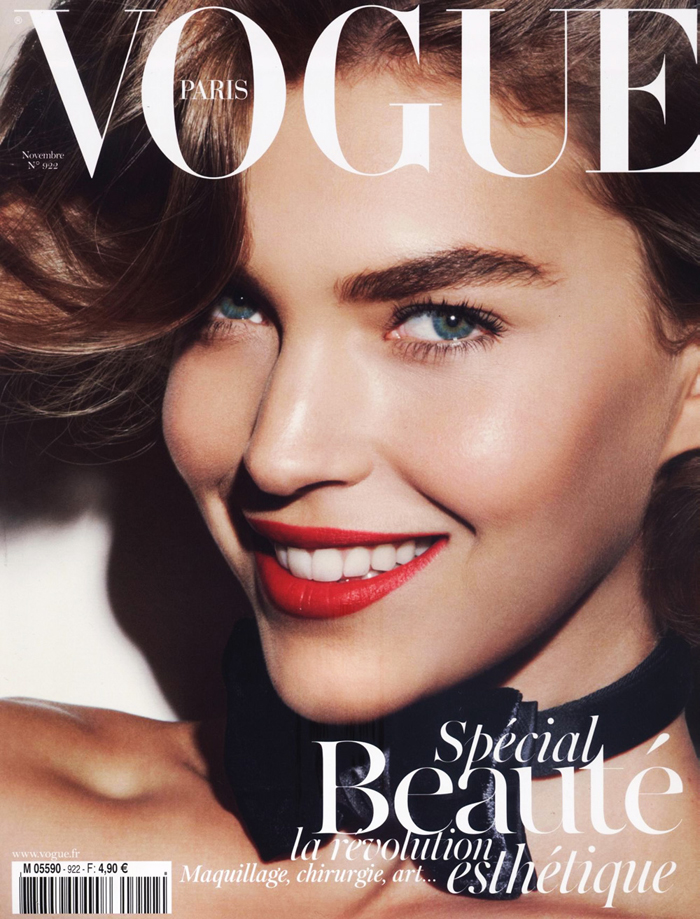 Arizona Muse
Any discussion of rising star 2011 models conducted without Arizona Muse is like a Paris Vogue cover without chic. And speaking of Paris Vogue covers, the ascension of Miss Muse onto its cover ranks ensured that the early hype of this girl was beyond justified. With Self-Service, Fendi, American Vogue and David Yurman keeping her in rapid fire mode, expect Arizona to lock her place in the Top Models all star club in the upcoming year.

2011 Campaigns of the Year
NEXT