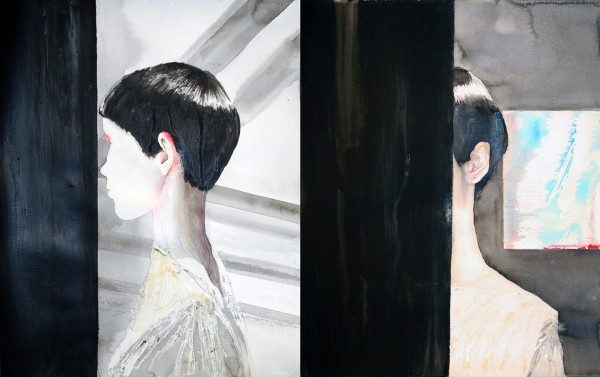 It’s no secret we’re big fans of casting director Daniel Peddle as are some of the biggest clients in the industry. His upcoming show, “Backstage” is reviewed in the latest V Magazine and feature some familiar faces seen in a way not ordinarily viewed. We caught up with Daniel to ask him 3 questions.

MDC: What have you discovered in 8 seasons capturing backstage through this medium?
DP: I started this series in 2006. Backstage is a fascinating ritual to observe, sometimes more so than the fleeting few moments of the actual show. It has been really interesting to try and capture in a painting the role of the model, the center of this flurry of activity.

MDC: Are you ever interested in doing a different medium and if not, why do you prefer watercolors?
It is really not about the paint for me so much as the water!!! We cannot control water, we can only pretend toâ€¦ I like the challenge of working in such a fluid medium as the work takes on a life of its own. Everything else can be a sticky affair but watercolor is pure to me.

MDC: What are your paints and papers of choice?
Found paper is my favorite! I also like to work off a roll rather than sheets. You have more freedom. As far as the paints go basically I like whatever is on sale in the grab bin!!! For me much of the process of creating art is about embracing accident and chance.