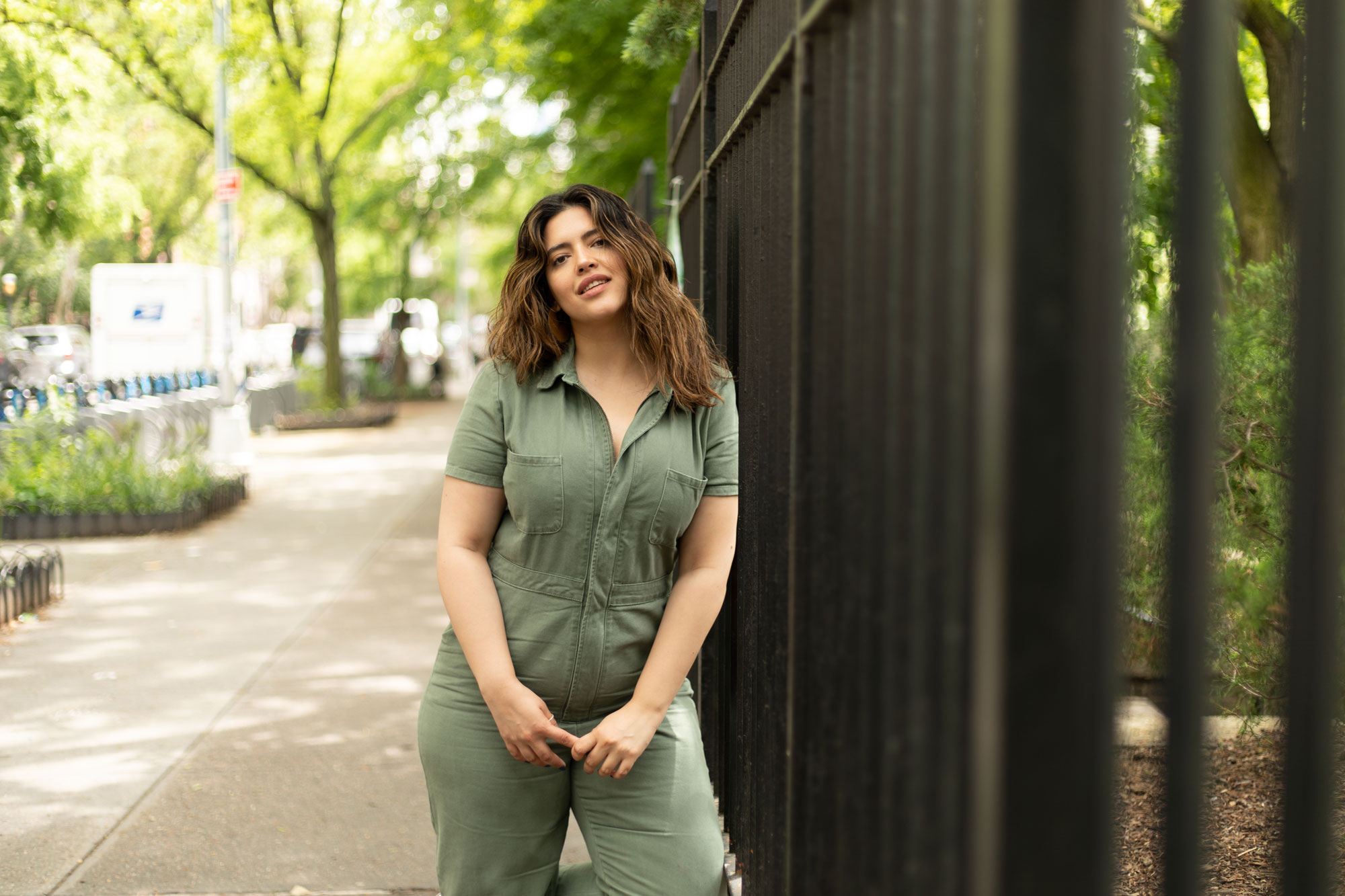 Photo by Nick Finochio
In 2018, models are never just models. They’re brand ambassadors, on-camera stars, or can inspire with something as simple as an Instagram post – the perfect summation for model Denise Bidot. The 32-year-old didn’t always imagine walking the runway — acting and a brief stint learning makeup were both dreams in her early 20s — but when a photographer asked her if she had ever thought about modeling, as Bidot put it, “I saw a cracked door and I ran through it.”

Bidot has modeled for major brands but is perhaps best known for her work at Becca McCharen-Tran’s innovative swim and athletic label, Chromat, declaring “Denise will always be one of our most iconic #ChromatBABES. She’s so natural and powerful on the catwalk and in front of the camera.” Bidot also hosts Cosmopolitan.com’s video series “The Beauty Lounge,” founded the “No Wrong Way” movement, which celebrates individuals as they are, and is one of the faces of Olay’s #FaceAnything that’s all about being a “campaign for confidence”. We spoke with the multi-hyphenate about her favorite models in the business, what she really thinks of NYFW castings, and how it all began.

How did you start modeling?
I grew up in Miami and my mom was a beauty pageant queen and always taking glamour shots of me. When I was 18, I moved to L.A. to pursue acting but was told to lose weight or drop my accent. So I ended up in makeup school and one day when I was on set a photographer asked me if I’d ever thought about modeling and I laughed, not understanding the plus-size market. She bugged me for about a month to do a shoot with her, which I thought would only live in my makeup portfolio indefinitely. But then she showed the photos to some people who wanted to know who the model was.

I saw you open Chromat’s FW18 show this past February and you killed it. How did you first meet Becca and how was this past fashion week for you?
Chromat to me is so beyond just a brand that I work for, they’re like family. The first show I walked in for them was in September 2014. I was introduced to Becca a few months before the show because she needed a fit model for the plus-size range she wanted to launch, Chromat Curve. As she was developing the line she asked me to walk in the show and I also ended up opening. I couldn’t believe she had that much faith in me. The show got insane press, but she didn’t do it for PR she did it because that’s what she saw as beautiful and because of that, I will have her back until the end of the world.

…we’re not asking to be included one time. We’re asking for a long-term goal of inclusivity with the power and success that comes from that.

Who are your favorite models?
Crystal Renn, we don’t give her enough kudos. She would do all of these amazing poses, like Coco Rocha, who is like Posing 101. And Heidi Klum — she’s a model and personality and I love how she runs her career.

Why do you think brands are reluctant to cast plus-size models?
I think about this always because we’re not asking to be included one time. We’re asking for a long-term goal of inclusivity with the power and success that comes from that. It’s not as though other brands are seeing the Chromat’s and Siriano’s of this world and thinking, “oh it didn’t work for them.” It’s working. It’s working really well. So what we need is to keep pushing the boundaries and keep hoping that these designers get it. It’s not a trend and it’s not a PR stunt, it’s the future.

For so many years curvy girls were limited with access to high fashion. If I saw a blogger wearing an outfit that I thought was fire and I wanted to shop for it I couldn’t even find it past a size 10 most times. It’s frustrating because I’m working my ass off and I want to represent myself in a way that I can’t. And it’s like why wouldn’t you want my coins and dollars? And if that’s just me, imagine how many other women are feeling the same way.

You have a really cool project called “No Wrong Way.” Tell me more about that.
When I started, it was called “There’s No Wrong Way to be a Woman” and it was a movement that set out to unite and uplift people. I wanted a platform for women’s stories to be heard and shared so we can unite in our power. What I found when I launched was that I got a huge response from the LGBTQ+ community so when I was thinking of the next campaign we added men to the picture. We added a trans woman Isis and I’ve learned so much from my colleagues about how to be inclusive and spread love. We rebranded the company and it’s now the “No Wrong Way” movement for anyone who wants to be a part of it. I want people to know that I’m there for them and I’m rooting for them. I’m very responsive on social media so when a girl reaches out to me I think if she took the time to write me a message I should damn well take the time out to at least respond back to her.

How about in the blogger and influencer space? Do you think social media has given curvy girls more visibility?
I think so, I think we’ve demanded our spot and I think we’re not going away. I think brands are understanding the power of inclusivity. We’ve paved the way a bit and now these girls are going to be demanding and unapologetic about what they want and they’re going to get it. And we didn’t get here alone, someone helped us along the way and we need to remember that and then turn around and help out our fellow sisters. If we don’t have each other’s backs, we don’t win.

Dear @chromat — every season gets better and better. To be given the privilege to return to the runway each fashion week and walk alongside a group of incredibly beautiful people, inside and out, warms my heart in such a profound way… and we always have SO MUCH FUN. Thank you! @gilleonsmith @beccamccharentran ?