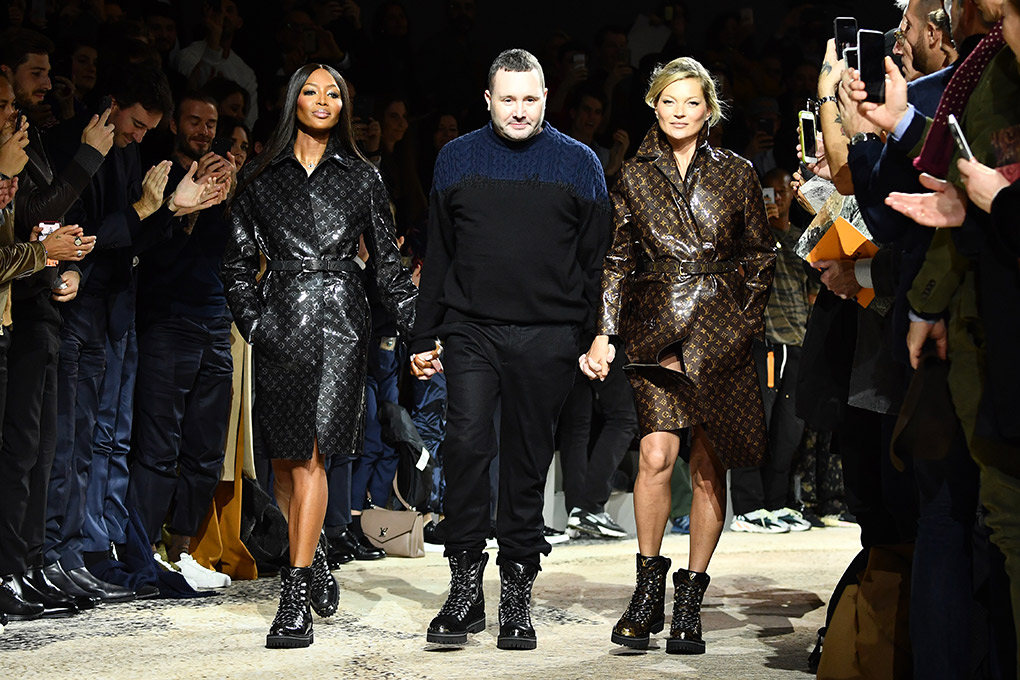 Earlier today in Paris, Kim Jones presented his last collection as men’s artistic director at Louis Vuitton, where he revived the French house with an edgy, urban spirit—exemplified by his endlessly covetable collaboration with Supreme last year. For seven years, his designs have personified the label’s adventurous spirit, pulling inspiration from the farthest corners of the earth, from the Himalayas one year to the Atacama Desert the next, sprawling across America and Japan and Africa and even under the sea for Spring 2013. For his final outing, legends Naomi Campbell and Kate Moss took to the runway to help send him off in a last collection that reflected the blend of athletic energy and intellectual artistry he has always captured so well. As we mark the end of an era that helped redefine menswear, take a look back at five of the favorite faces he has brought along on the journey with him. 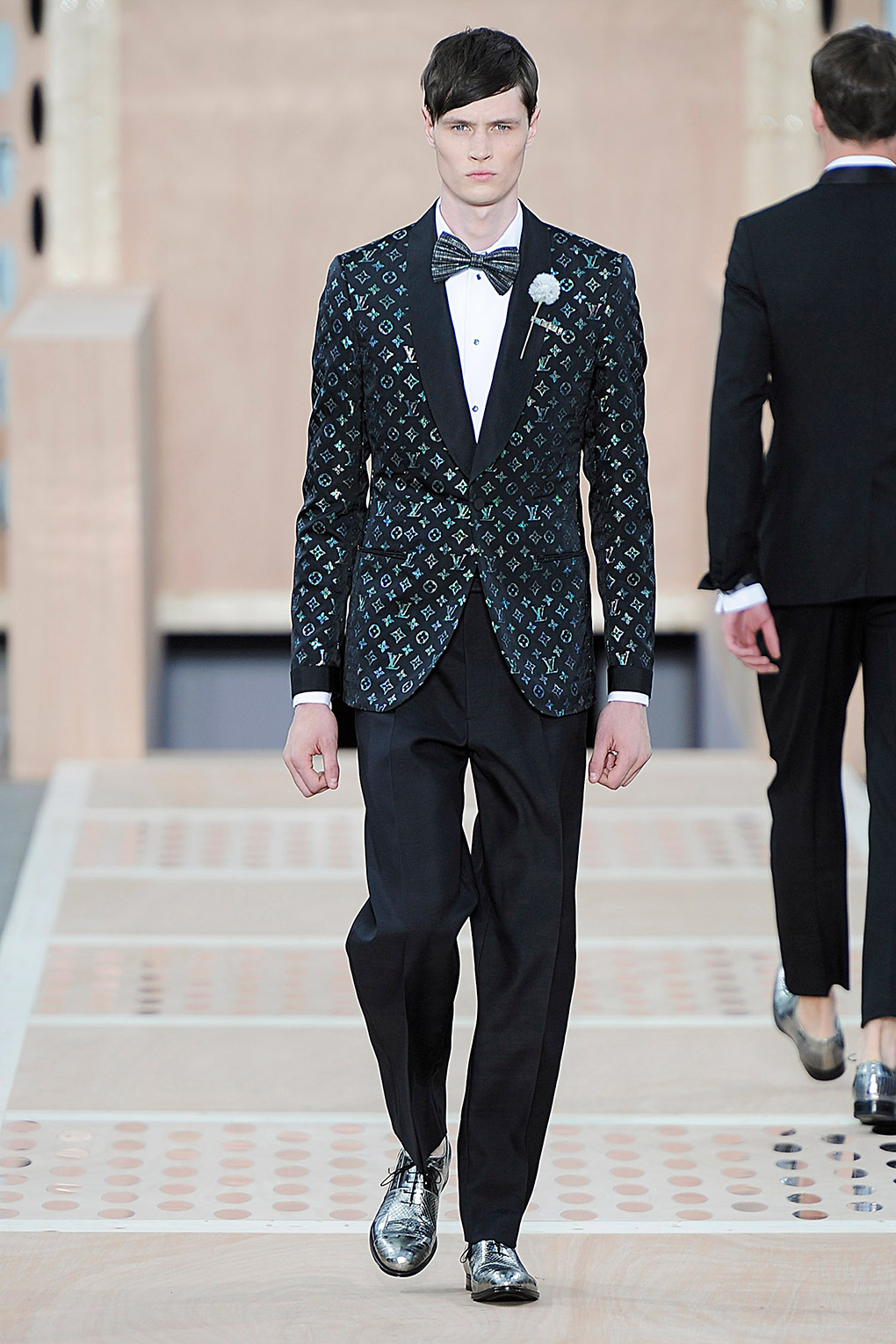 Photo by Catwalking/Contributor
Andrew Westermann
Jones tapped this lanky German artist for eight runways (bringing him back today for his finale) starting with his Spring 2013 aquatic outing, and Westermann has made regular appearances on the front row of his shows as a friend ever since. The highlight of his tenure was his closing slot for Spring 2014, wearing a blazer inlaid with a Monogram print in mother-of-pearl, which caught the light and sparked and glowed as soon as he stepped out into the glass box in Paris’ Parc André Citroën where Jones used to show. “He’s not just the best designer in the world—as he pushes fashion, and especially and most importantly men’s fashion, forward—but also one of the best people I’ve ever met,” Westermann says. “I couldn’t imagine my life without him. I’m the way I am because of him…one of the most generous, most talented, most loyal, and especially funniest people I know. Wherever he goes next, I go too! We’re a family and it will always be that way.” 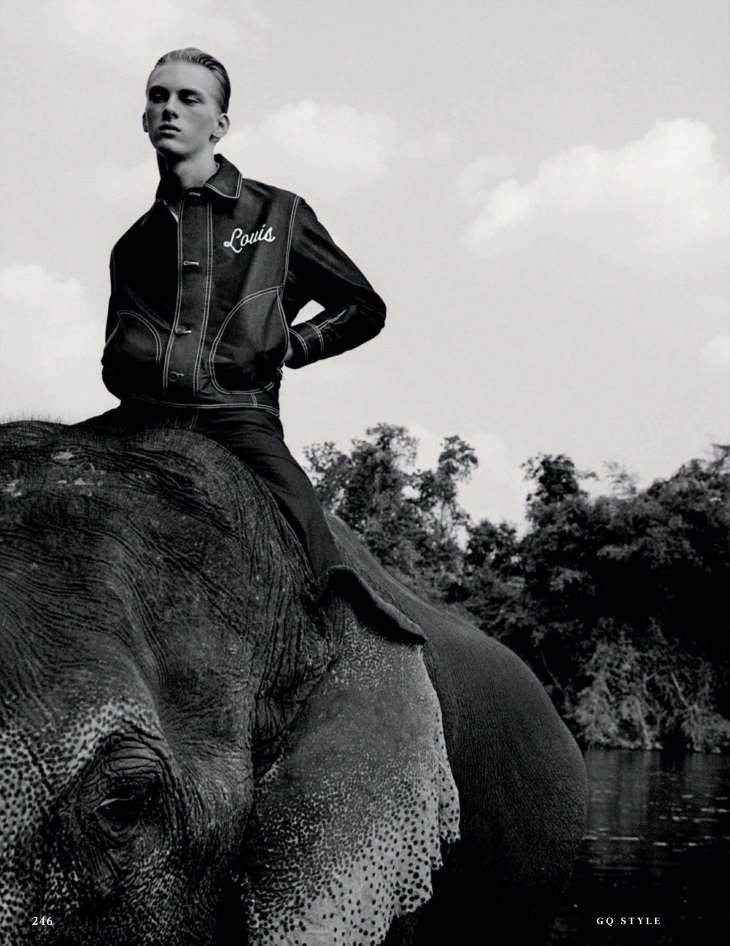 Dominik Sadoch
It’s been eight seasons in a row for this sharp-featured Pole, who is also a familiar face from editorials focusing on Jones’ designs, having traveled the world from Cape Town for Esquire Greece to Thailand for GQ Style Germany in his clothes—as well as New York last year to highlight his Supreme collaboration. He closed Jones’ show today in a shining, Monogram-covered jacket and pants, the final word in the designer’s celebrated run. “Kim is simply the most lovely, caring person,” Sadoch explains. “Anyone who’s had the pleasure of working with him won’t hesitate for even a second to admit it. It’s incredibly touching and heartwarming to keep on hearing you’re a part of the family—and then after feeling the enormous amount of support, you know it couldn’t be just talk. It’s inspiring to see him making his vision come true. He’s a legend.” 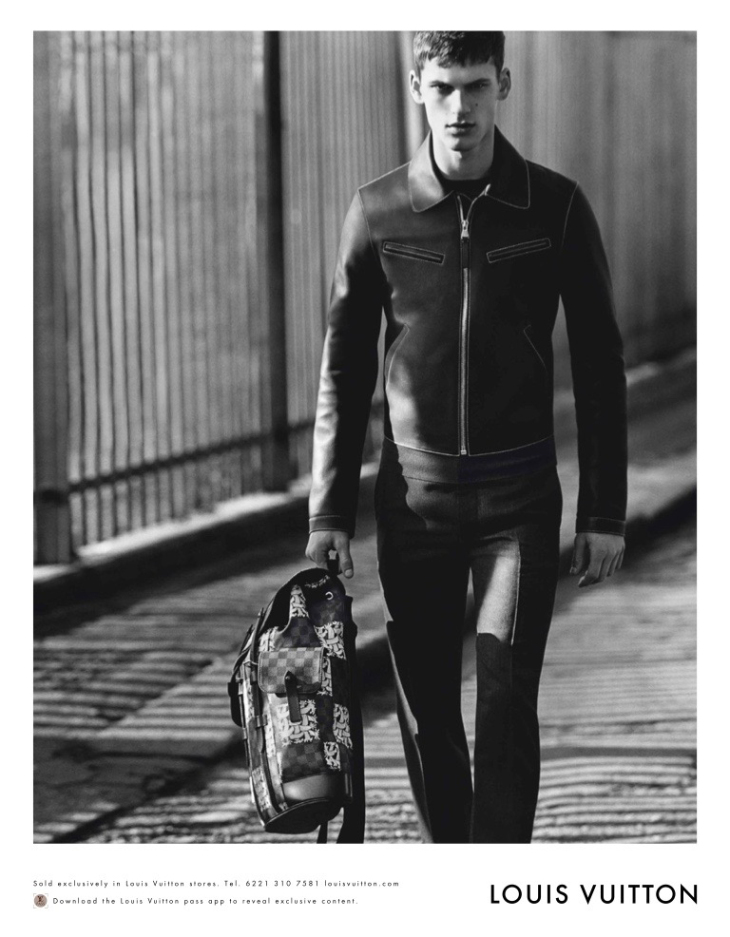 David Trulík
This square-jawed Slovak’s first four shows were all for Louis Vuitton, from closing Fall 2015 to opening Spring 2017 in a full-on reptile-skin trench coat. He landed the lead in the label’s Fall 2015 ads by Alasdair McLellan and took to the water the following year dressed in Jones’ sporty capsule collection celebrating the America’s Cup yacht race. “If I could describe Kim Jones in three words, they would be kind, successful, and helpful,” says Trulík. “He is a man with a big heart. Our cooperation changed my life since I met him for the first time as a beginner model and a new face in Paris and I have learned so many things from him. I’d like to say thank you very much again for everything. I think fashion needs more people like Kim, not just because he’s one of the best designers, but also because he really cares about the people around him.” 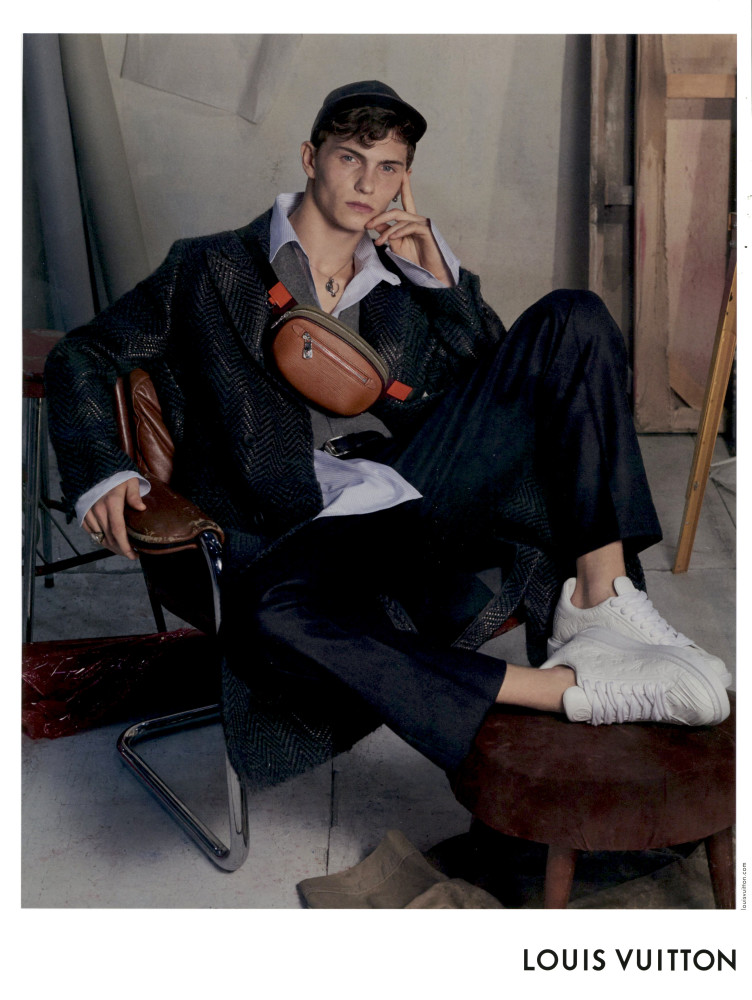 Luc Defont-Saviard
This freckled Frenchman was in many ways the face of Louis Vuitton menswear in 2017, appearing alongside Xavier Dolan in the Africa-inspired Spring campaign lensed by Alasdair McLellan as well as Fall’s artist’s studio by Steven Meisel. He’s also walked in the last five shows Jones has presented. “Kim has contributed to changing my life,” offers Defont-Saviard. “I feel blessed that our paths have crossed.” 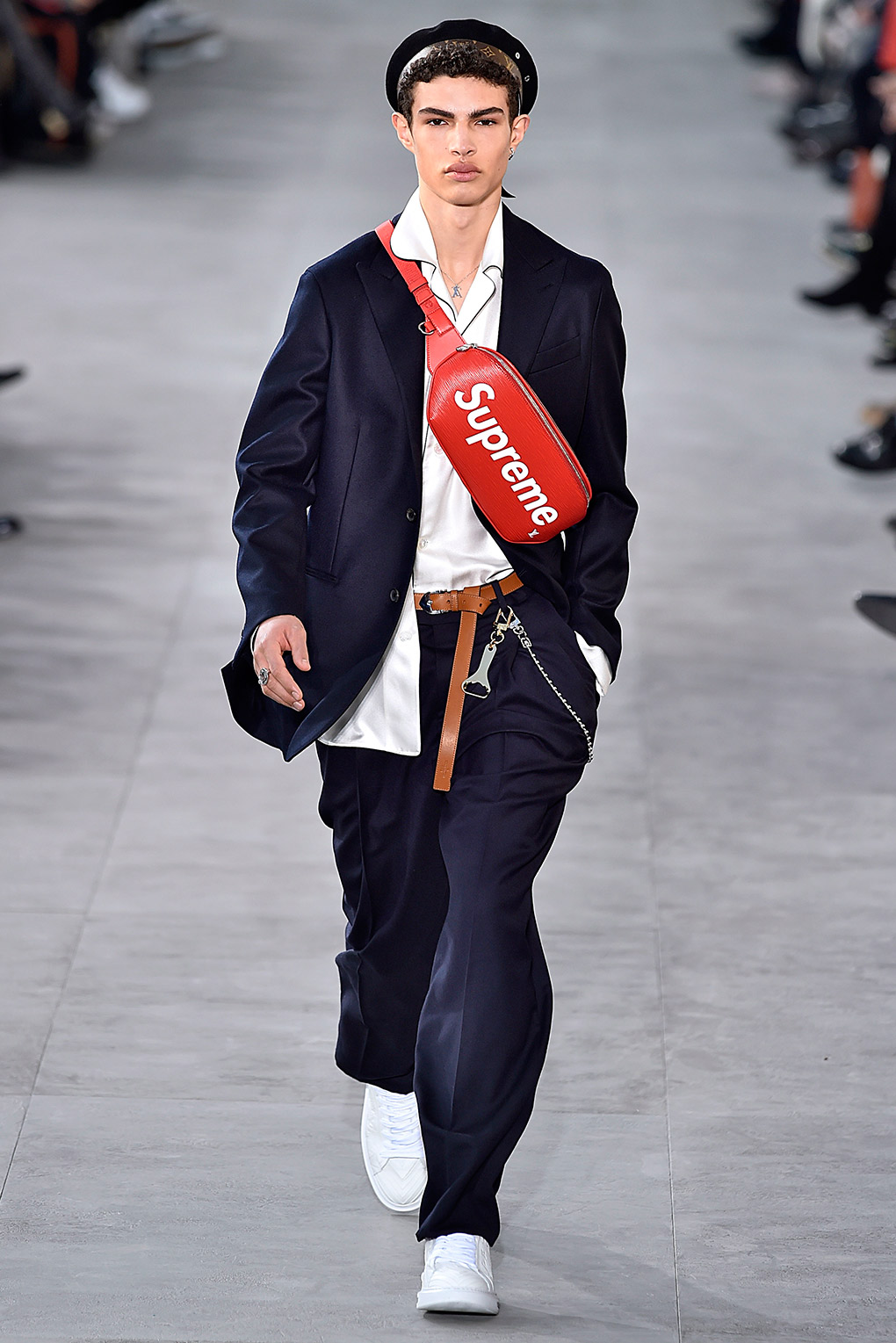 Photo by Victor Virgile/Contributor
Noah Luis Brown
When this fine-featured Swiss stepped out onto Louis Vuitton’s Fall 2017 runway in a Monogram-rimmed cap with a bright red Supreme fanny pack strapped across his chest, the year’s most-hyped collaboration became the biggest news of Paris Fashion Week. The former ballet dancer made his campaign début for the house in front of Steven Meisel’s camera for Fall 2017, and is surf-ready in its brand-new ads for Spring 2018. “Kim Jones was one of the biggest inspirations in my life,” says Brown. “It was so nice to meet him and to work with him over three seasons. I had such a good time with him and will miss him in the team of Louis Vuitton. It was a hardcore experience from zero to 100 and I really appreciate Kim for what he did for me. It broke my heart to read he’s leaving Louis Vuitton—such a powerful person, or should I say rock star. I hope the best for him in the future and hope to see him very soon.” Lagos Delivers the Unexpected
NEXT