Of the top men’s magazines to come out of Asia, GQ Style China and GQ China has consistently stood out from the rest with its art direction and super cool choices in photographers, stylists and models. One of the main reasons has been the fashion director for both magazines, Dan Cui. MDC’s Felix Chang chats to Dan about his origins, his insights on the Chinese market and gives us some behind the scenes shots from the new issue out right now. (For our Chinese audience, Dan’s interview is below the images. 中文读者们，Dan Cui专访内容的中文版本於图片之下。) 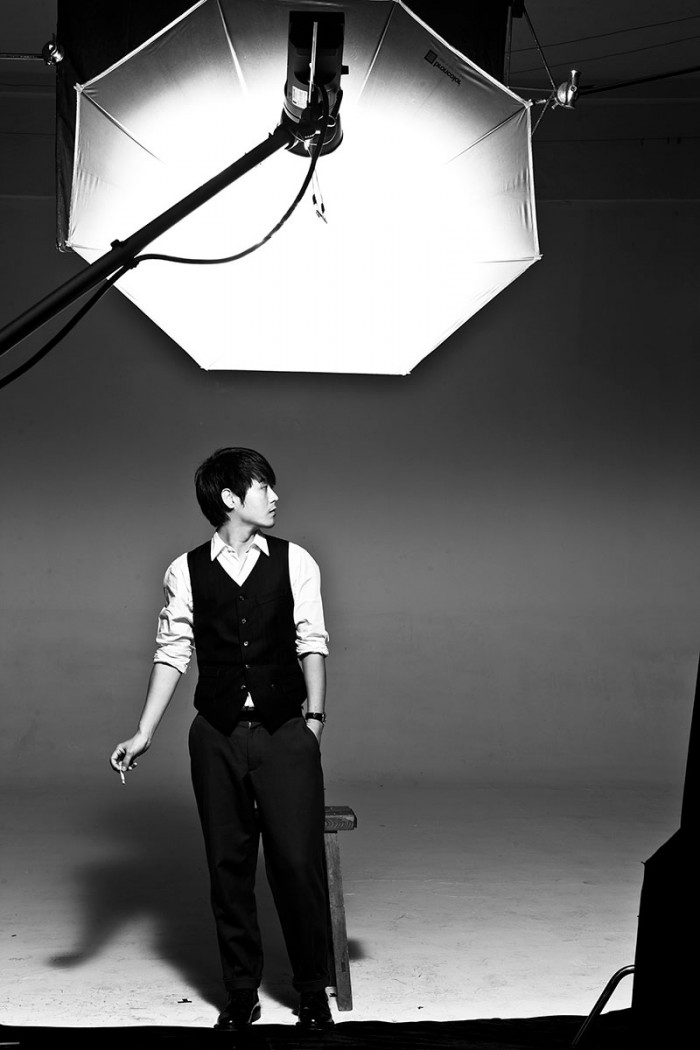 Where are you from?

I majored in Theater Costume Design in Shanghai Theater Academy. After that, I went to ESMOD in Paris to pursue advanced studies in ready-to-wear design. I decided to come back to China in 2005. I have been in the fashion industry for over eight years now.

How did you get into fashion?

When I first came back to China, the fashion design industry of China was still undeveloped, and there were barely any platforms built for independent designers to show their work. Therefore, I chose not to become a designer but took a chance, referred by a friend, to interview for a fashion editor position for Marie Claire China. I always had a fancy for the fashion media industry, and I always liked and thought about magazines since I was little. On top of that, I was curious about how to make fashion visuals, and I liked articles and critiques of the fashion industry. Because of my passion for fashion, I nailed the interview and got my first job in this industry. After three years of hard work and a little bit of luck, I was promoted to be the fashion director. At the same time, GQ was launching its first issue in China. I decided to take a chance and entered the media sector of men’s wear.

Who are your favorite designers?

I started out being obsessed with Comme des Garçons, Viktor & Rolf, John Galliano, Jean Paul Gaultier, Alexander McQueen and Martin Margiela. I have since then come to equally appreciate Dries Van Noten, Nicolas Ghesquiere, Miuccia Prada, Alber Elbaz, Raf Simons, Phoebe Philo and Thom Browne. I have many favorites. Often times I have to look at designs for the magazine with an unbiased eye. I think it depends on each particular season. I recently fell in love with another designer, Alexandre Mattiussi, and we feature him in this issue’s designer interview.

In every issue of GQ Style China, there are a few new Chinese faces that the magazine features heavily. How do you select those new faces? What criteria are you looking for in those models?

I think this is an exciting thing to do, but it’s a bit difficult at the same time. I always had an expectation for the Chinese youth to bring different faces and spirits to the game. However, most Chinese young people are still taught to be the “same” as everyone else. This comes from the pressure at home and in the society. This makes it hard to find new faces with unique characteristics and personalities. Plus the fact that the modeling industry in China is quite monotone, and most of the agencies are not willing, or have no authority to make the current condition of Chinese models more organized. I also think there are not enough good judges of talents. Even if they have found great models, they don’t know how to make the good models “stars”. And these talents will transfer to a foreign agency, which makes the Chinese agencies keep doing “passive” management. Therefore, when I find a new face, I am always excited to help them find recognition. I think I have a good talent in selecting models and through different means of styling, backed up by various kinds of shoots to create different feelings about particular models. And that model at that time should only belong to GQ. I select these better models mainly by castings. For selecting models for GQ Style, I tend to choose new faces that haven’t been over exposed. I start with one particular style to match his unique personality. There are quite a lot interesting stories behind the method of styling and selecting the right models. The last few castings have given me some hope in the Chinese modeling industry as I saw more boys born after the 90s had different characteristics and spirits.

Chinese fashion and fashion magazines are moving forward faster than ever. As the fashion director of GQ Style China, what is the magazine’s perspective and what kind of role does the magazine play in men’s fashion in China?

GQ Style China obviously mainly translates Chinese trends, but it also grasps international perspectives and has always acted as a leader in the industry in China. The magazine constantly attempts to find new ideas and talents from within, since China has so many rich resources. GQ Style China has kept close ties to its Chinese roots while fulfilling its responsibilities as an international fashion media brand.

Give us some behind the scenes tidbits about the current issue of GQ Style?

For this issue, we used a cover introducing rising young face, Jeremy Wu. For this issue, we worked with Armani as one of the key brands of this issue. Jeremy was the very lucky new face chosen by Mr. Armani himself, and is on the printed cover of this issue. Another great new face is Jin Dachuan who made his debut in Europe in the Prada show last June. Since then, he walked for Prada again as well as Louis Vuitton, Kenzo, Jil Sander, Bottega Veneta, and Roberto Cavalli. This has made him one of the most brilliant Asian faces to recently emerge onto the market.

Our cover shoot took place in Melbourne, a nice sunny city in the south globe. We combined fashion with a sporty theme to translate different characteristics and spirits of urban young people.

Another highlight of this issue includes our fashion feature shoots named The Sexy Ones. We featured Liao Fan, the new best actor of the Berlin Film Festival, Zhu Zhu and Zhou Dongyu, two famous actresses in China and glamourous faces of different industries in China to combine the Chinese way of “sex appeal” with fashion.

We also invited Anders Solvsten Thomsen, the Fashion Director of Love and new vigorous photographer Felix Cooper to present us an edgy grooming story, Men in Canvas. They used a sophisticated method that illustrates how the attitudes of young artists are timeless.

In addition, photographer Marcelo Krasilcic (Serlin Associates) and stylist Haidee Findlay-Levin, who have been working with us for a long time, created a fun fashion well story that focuses on the color of clothes.

Chinese Photographer Fan Xin has contributed an editorial with a powerful and unconstrained style of pictures that transmit the unruly spirit of young people in the surroundings of different luster and textures.

We also worked with Photographer Li Zi to achieve a fashion story named Spoiled. This story created a contrast between the coquetry of flashing materials and the quietness of masculinity.

Photographer Trunk Xu locked his camera lens on the new rising British band Coastal Cities and recorded one day of their lives. Members in the band, Sean Semmens and Declan Cullen, walked recently for Hedi Slimane in Saint Laurent. 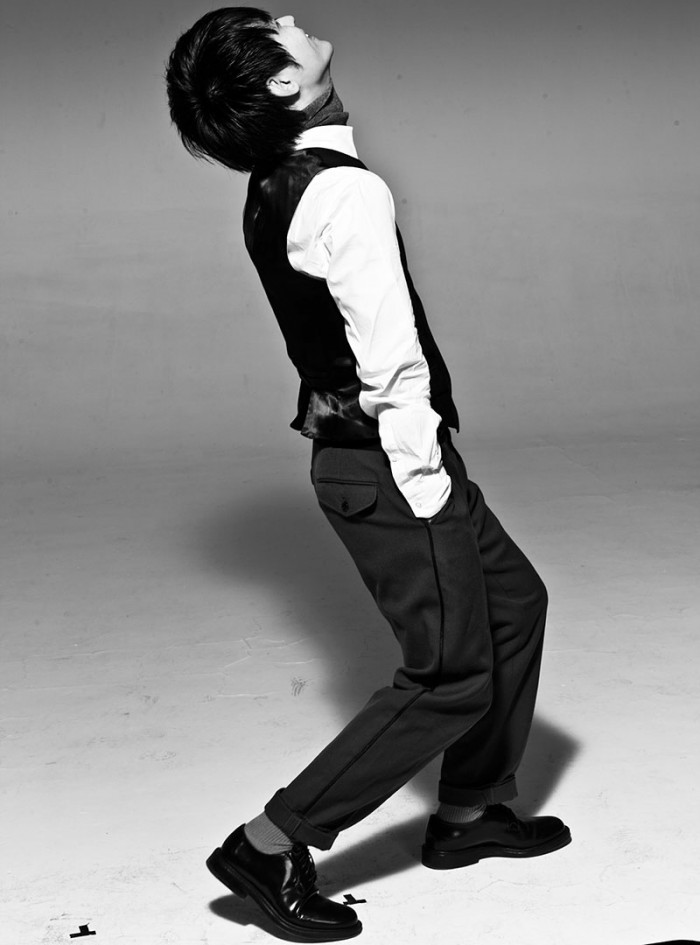 All behind the scenes images of GQ Style China S/S 14 below, courtesy of Dan Cui. 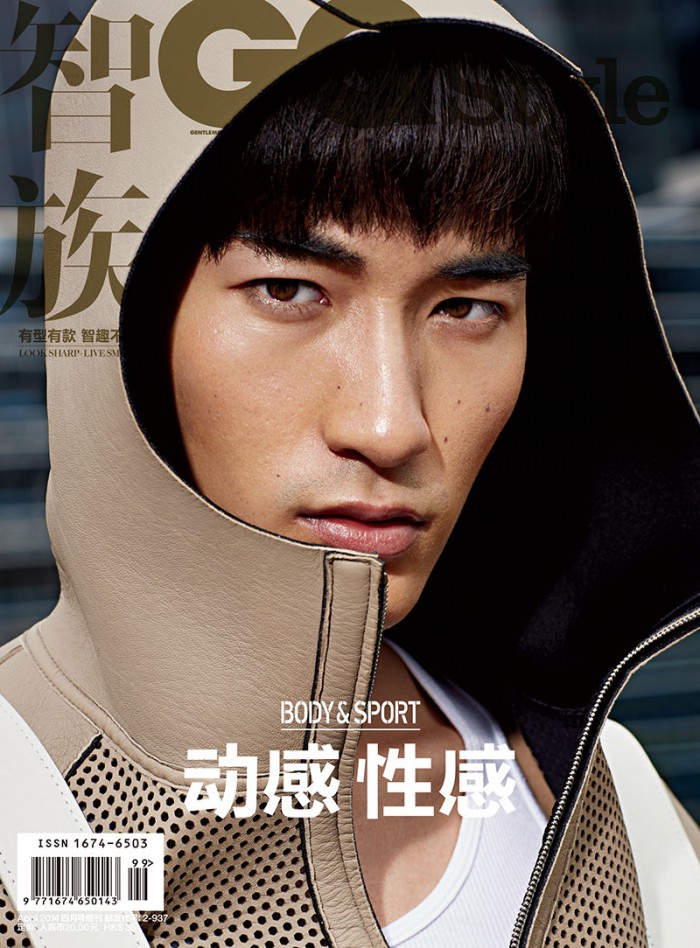 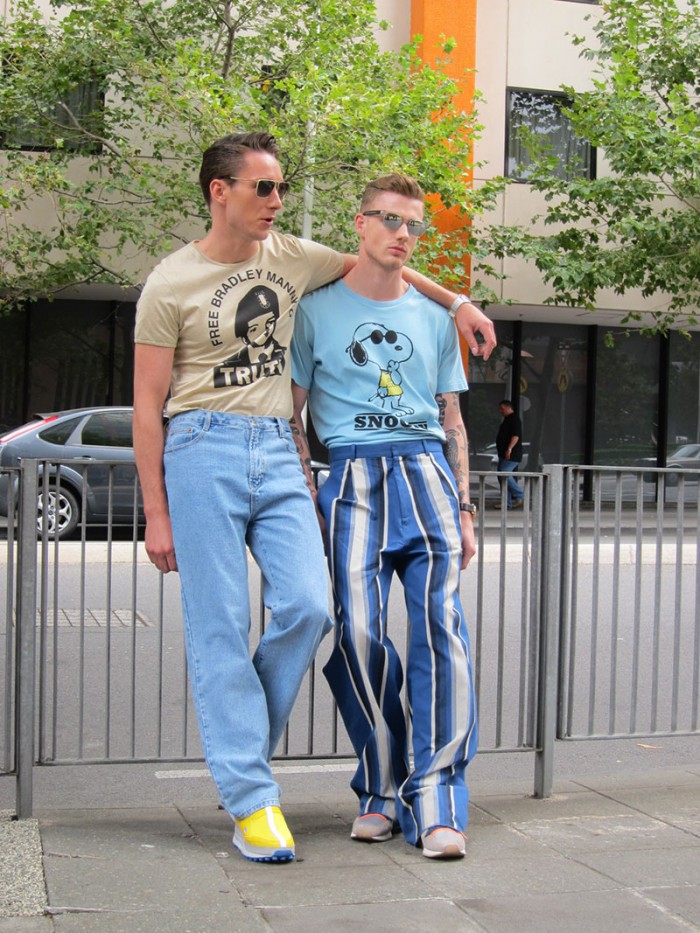 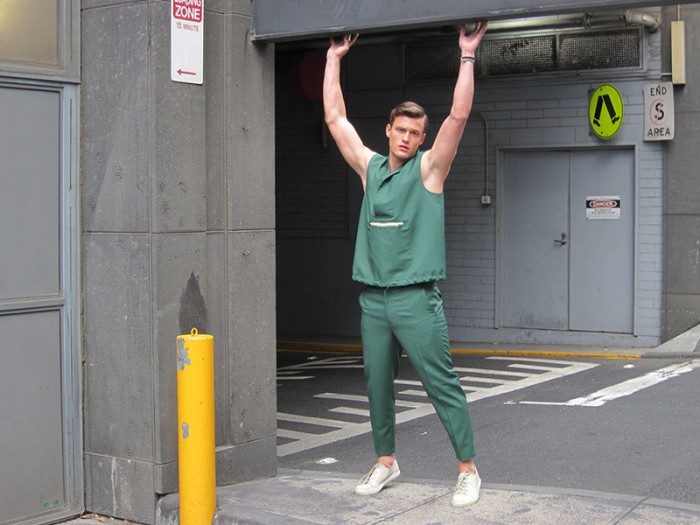 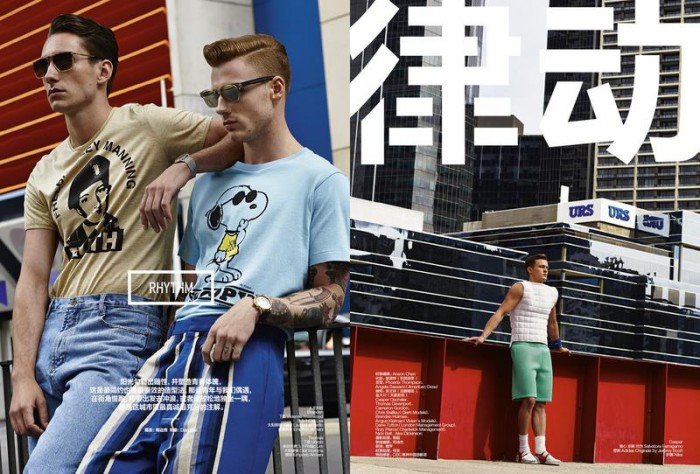 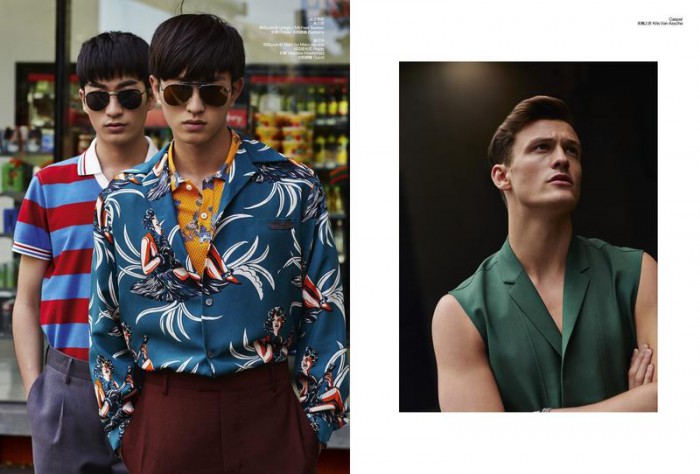 Trunk Xu shoot: Behind the scenes 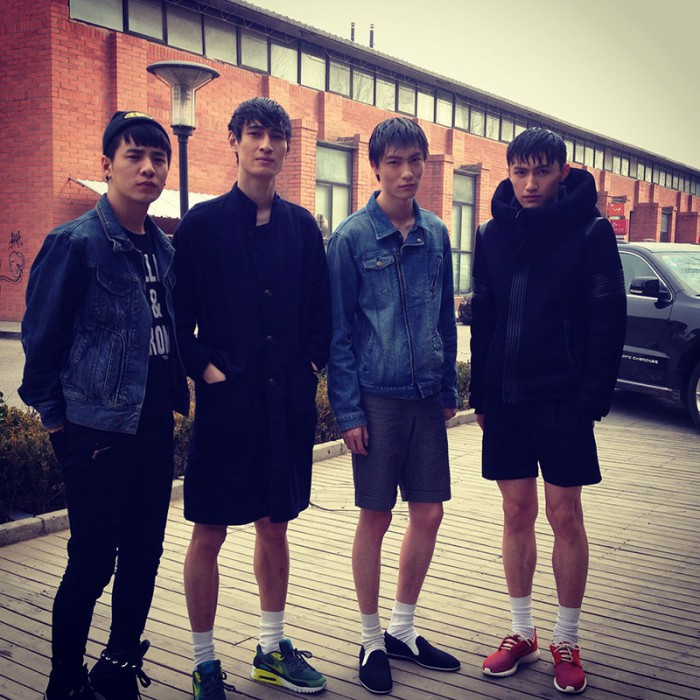 Trunk Xu shoot: From the issue 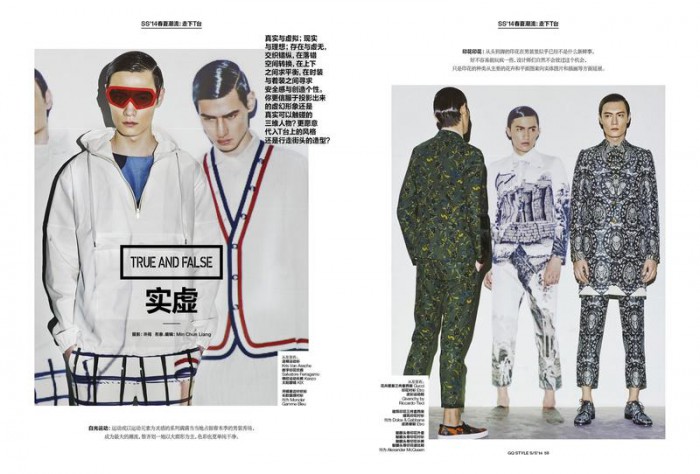 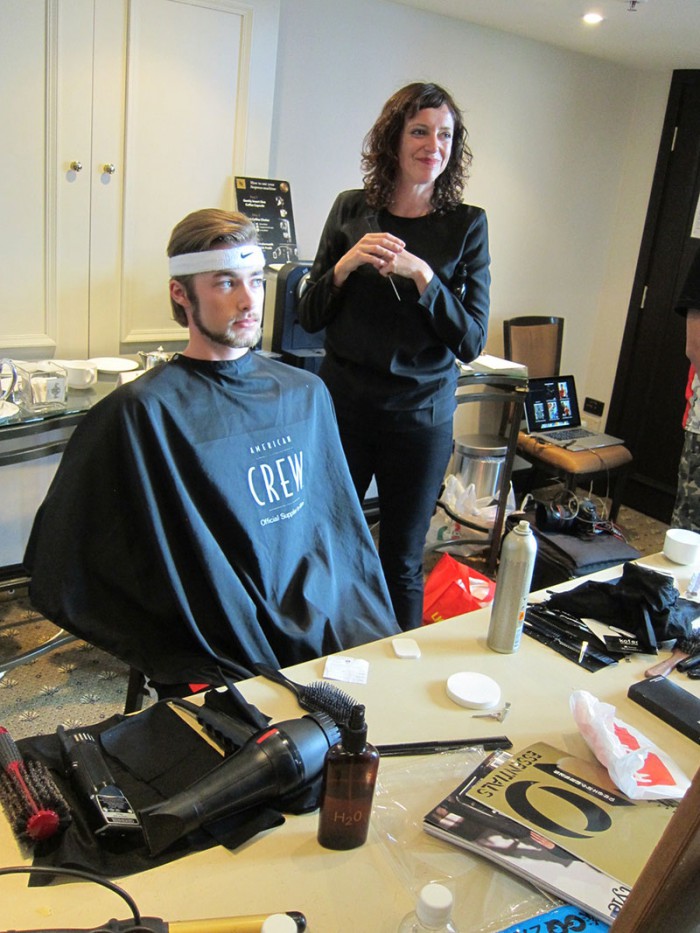 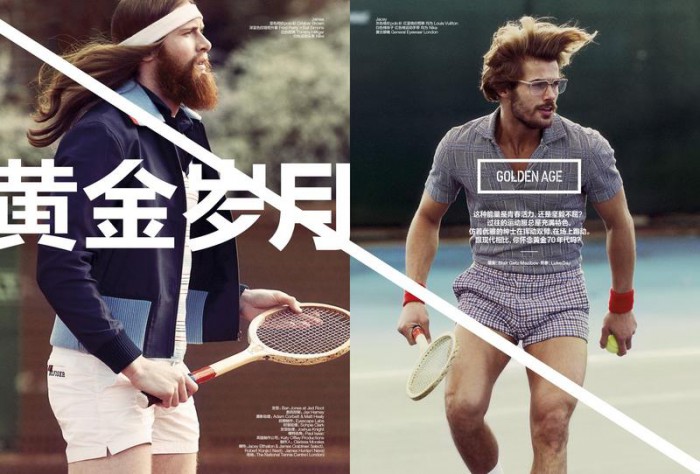 Li Qi shoot: Behind the scenes with the Luu Brothers 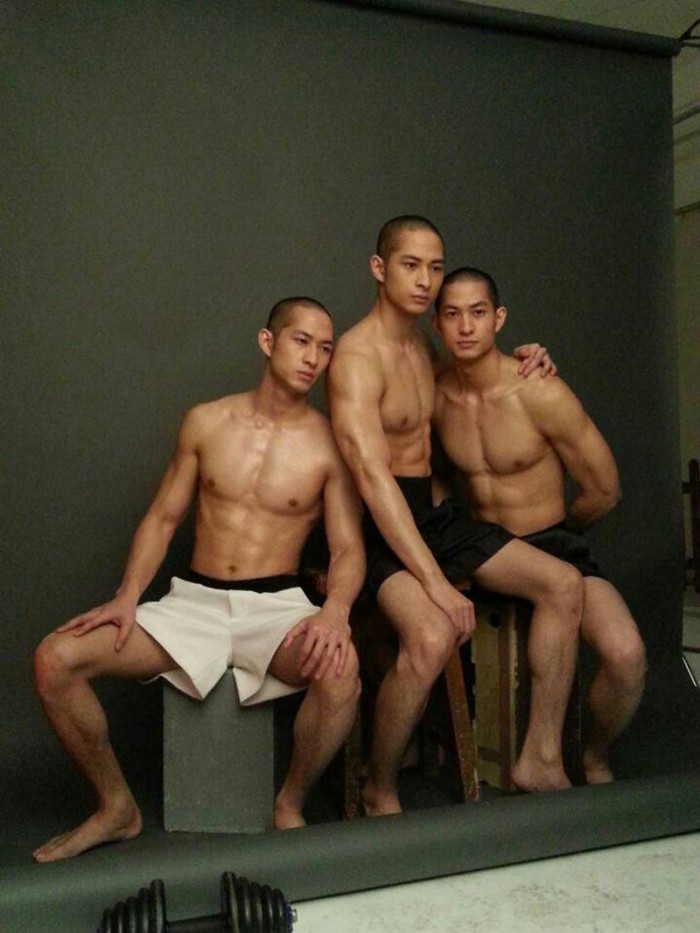 Li Qi shoot: From the issue with Hao Yun Xiang on left 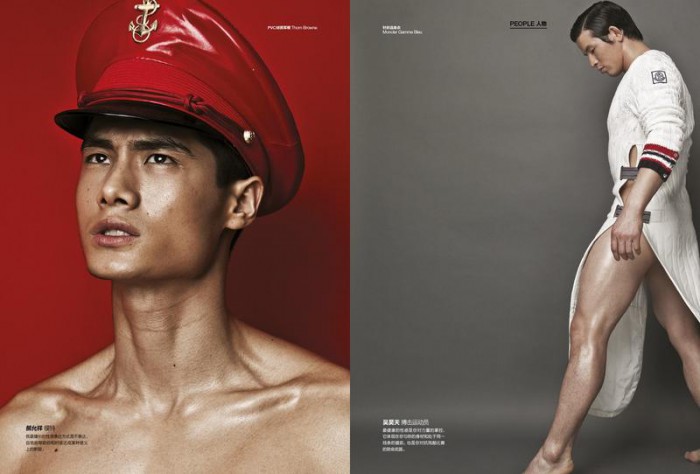