Memorable moments round two is here with even more FW14 beauties eager to share the moments that made their season’s special. Take a look at the runway regulars below and be sure to take peek at our first lineup of memorable moments for even more behind the scenes tales. 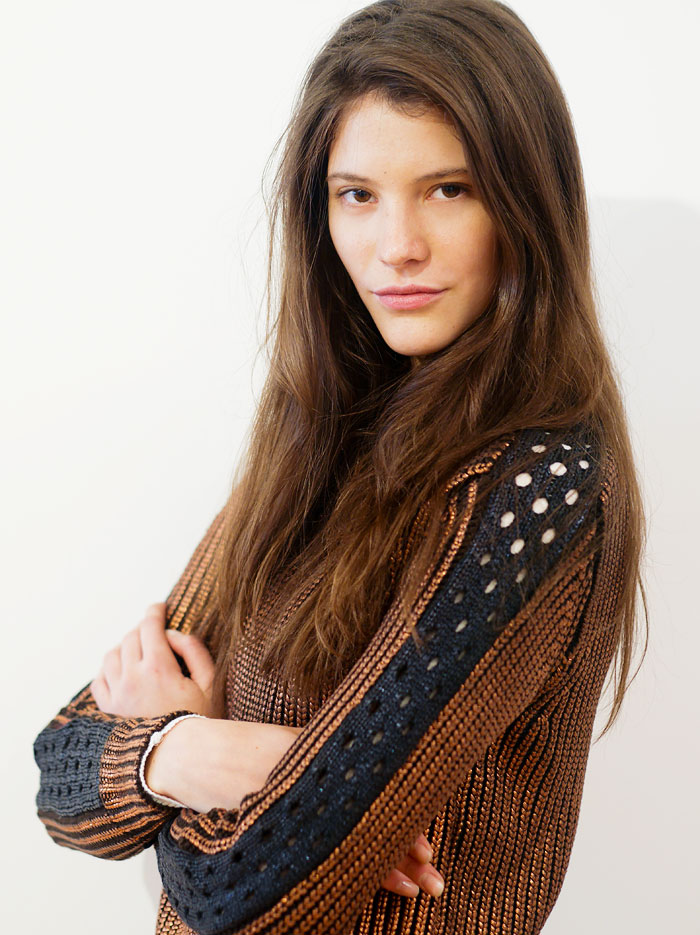 MEMORABLE MOMENT: My favorite moment from last season was one day in London, it was my first time there. I was in a fitting and it was so late, I was so tired of course. At one point they were pinning a dress on me and I heard a voice that was like, “Hi!” I thought to myself, ‘What’s that voice? I swear I recognize it.’ I didn’t answer at all and then I heard, “Okay, Carla, can you walk please?” I turned around and it was Mick Jagger! I was like, oh my god. He was like, “Yeah I think I like that, I think I like this.” I couldn’t believe he was talking about the dress that was on me!

I sent a message to my best friend, I was like “oh my god it’s Mick Jagger here in front of my eyes!” and she said, “Tell him that I love him!” and I was like, “I can’t!” It was so funny and so good.

This season there were so many, but I think Versace was wonderful. It’s more like playing a role than just walking down the catwalk – you have to play a little bit and feel sexier than you would at other shows. There were maybe, 50 models and all of us there, we knew each other and it was super fun to share that night. It’s Milan, it’s nice, it’s relaxing, it’s Italian style. I think that was so fun and the show was amazing, and it’s two so you have two chances to enjoy it. 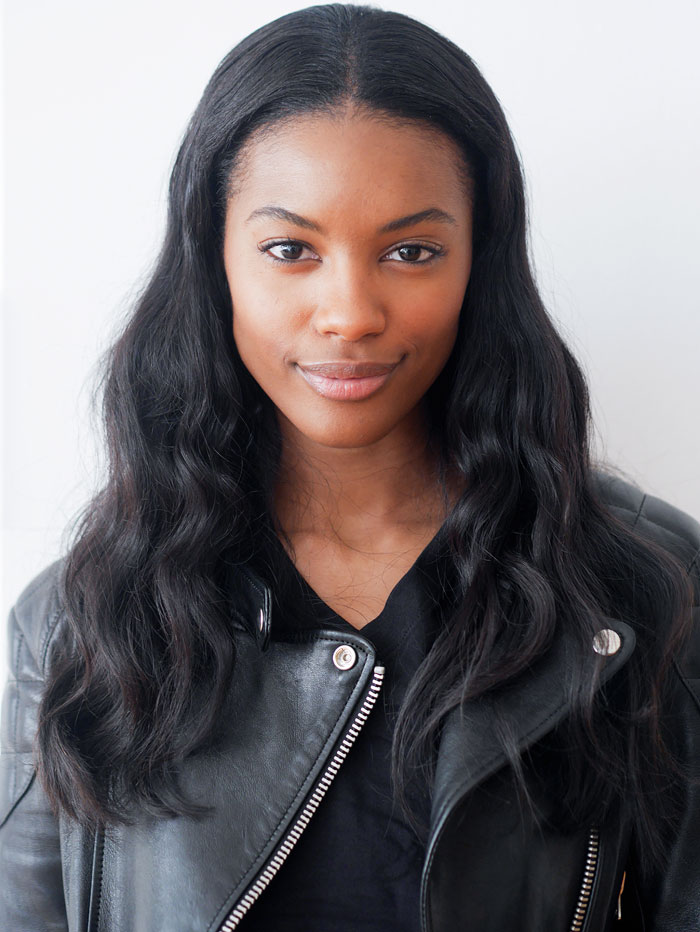 In my memorable moment I felt the difference between joy and happiness and could actually compare them. Joy is linked to pleasure and intense sensations like fear, which is a visible manifestation of happiness (eg the VS). While happiness is well-being, self-confidence, feeling of accomplishment and inner peace (Ex: Calzedonia).

At this (Calzedonia) show I felt that joy and happiness were together and I had full control of the situation. All I felt inside reflected on the outside broadcasting to the public at the end. I received compliments on my self-confident attitude and personality, which turns out to be a recognition of my work …

Overall I felt connected with people, which strengthened contacts and opened up some doors. 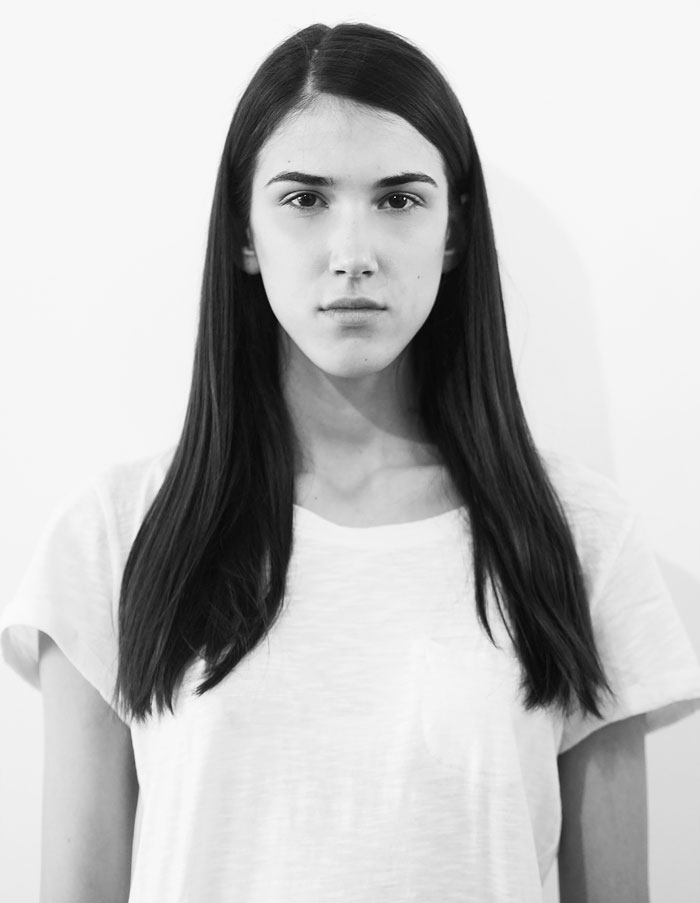 MEMORABLE MOMENT: My favorite moment of the season was after so long of being alone all the cities when three of my friends came to Paris to visit. They followed me to all of the castings and fittings and the rest of the time we spent together in the city. 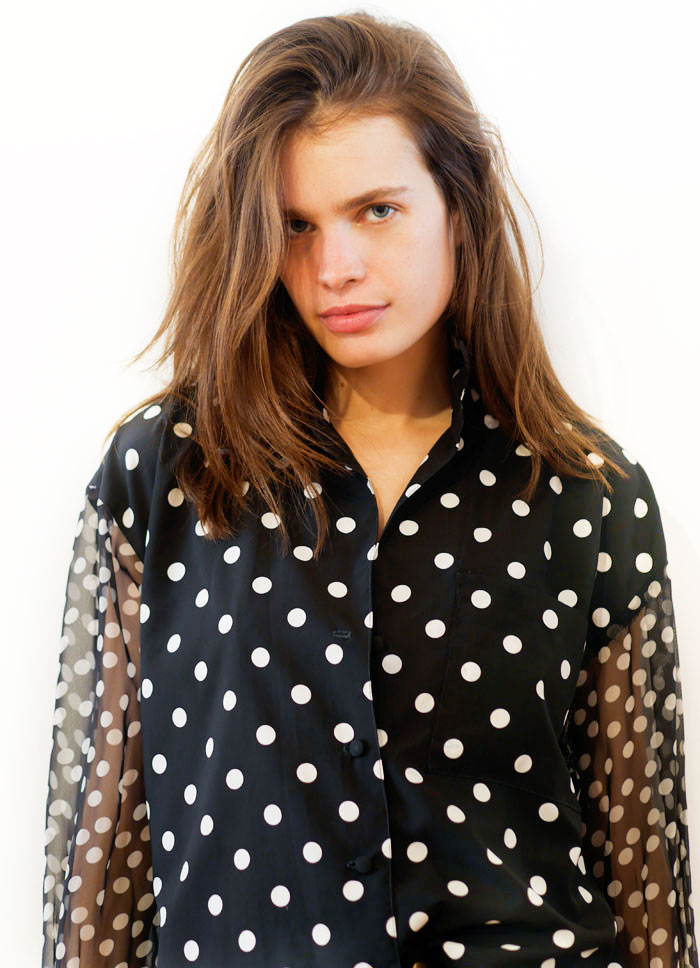 MEMORABLE MOMENT: My most memorable moment was when I found out that I was semi-exclusive for Alexander Wang. It still is, I still can’t believe it that I did it. Doing the show and being there was amazing. It looked like we were in a time machine, the energy and everything was beyond. The location, the music, the clothes were glowing, everything. The experience was super and I really like him, so it was really nice that I was working for someone whose work I really enjoy. 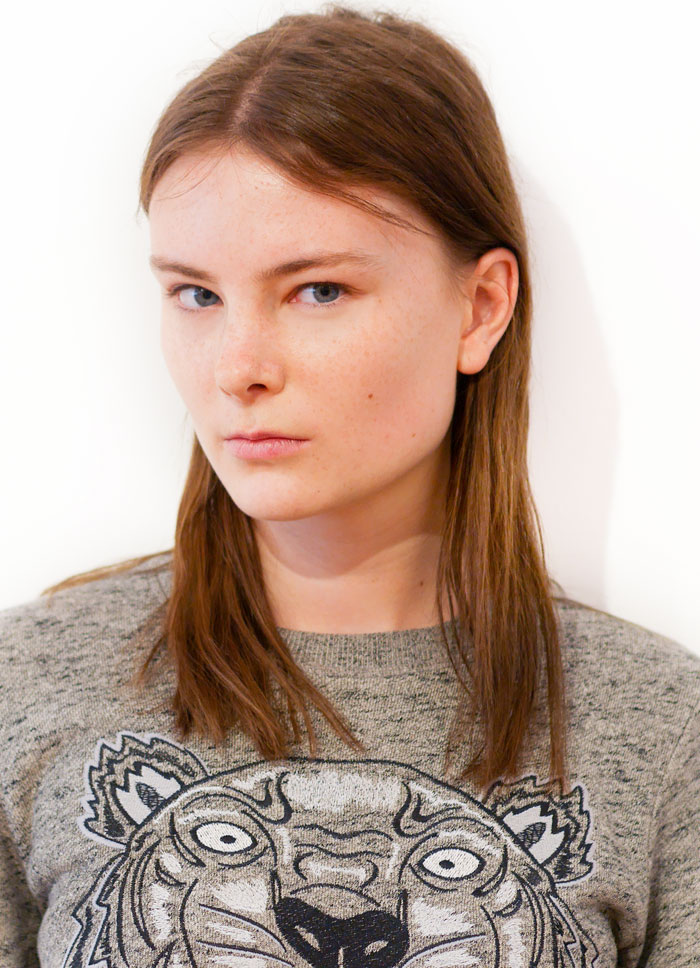 MEMORABLE MOMENT: I don’t know if you can call it a moment, but my favorite day was my birthday I think. I had my birthday in New York and it was my first birthday away from home. My parents usually wake me with a birthday song and we eat breakfast, it’s very home-y. This felt so different! I started the day Skypeing with my parents and my agent had tried to give me the day off, but she texted me with a request casting at Marc by Marc, so I went there and had lunch with my friend after that. Then she called me again with the fitting for Marc by Marc, I was happy, of course. After that it was getting kind of late and I had dinner with my two Danish friends, also models, it was all really rushed. It almost didn’t happen, but agent called me five minutes before we met and said I was confirmed for Marc by Marc and Phillip Lim so it was a great day, the best gift! 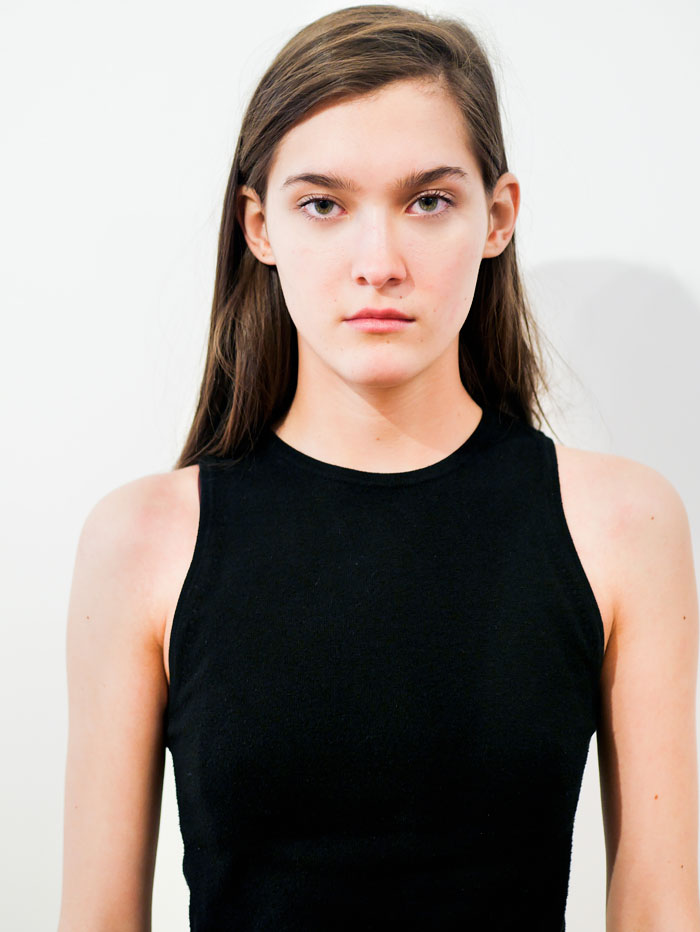 MEMORABLE MOMENT: My favorite moment, I think was the morning of the Chanel show. Call time was something crazy, I think it was like 5 in the morning. So, I get dropped off at 4:30 and they dropped me in front of a supermarket. My friends and I were like, what the hell? We had no idea what we were doing. Then I saw out of the corner of my eye a box of spaghetti with the Chanel logo on it. These guys came out and they were like, what are you guys doing here you’re supposed to be backstage! We had just walked into the supermarket, nobody had even told us what the set was like. I think that was my favorite moment, just taking it all in.

Karl, in the fitting, the only thing he said to me was, “what’s your favorite supermarket?” and I was like, “uhh…Whole Foods.” Then the morning of the show I put two and two together. 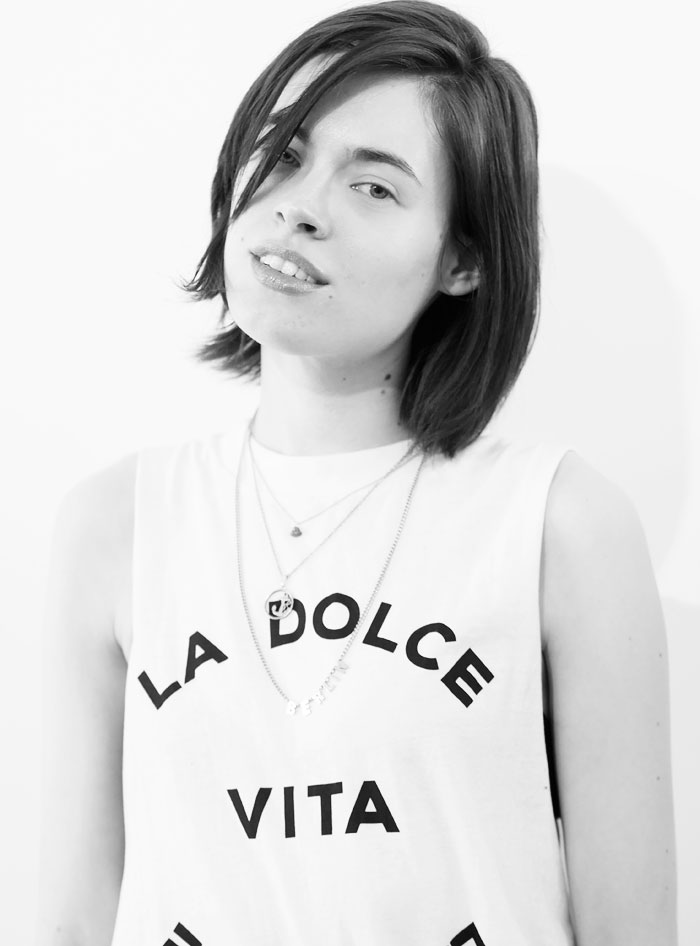 MEMORABLE MOMENT: My favorite moment was definitely walking for Alexander Wang, it was my first show of the season. I was semi-exclusive, so you can’t really beat that high. It’s why I flew to New York, I had like, three days notice that I needed to be here. It still wasn’t for sure that I’d get the show when I came out but it was the motivation to come out here. Other than that, the whole overall process of that show was amazing. There were so many special moments in fashion week… or fashion month for me, just even down to going to the casting that ended up being also fitting for Rodarte. Walking in and having them just be so amazing and so sweet and seeing these Star Wars dresses and reflections of my childhood and things that I’m into, for me that’s the moment where I think I got so emotional that I was finally doing what I want to do. Being a fan of so many of these designers for so long and actually having a real connection and bonding over Star Wars, moments like that were really precious. To have people who can really nerd out with you and who can convey that in such a beautiful fashion, it’s like, this is too many good things coming together at once. 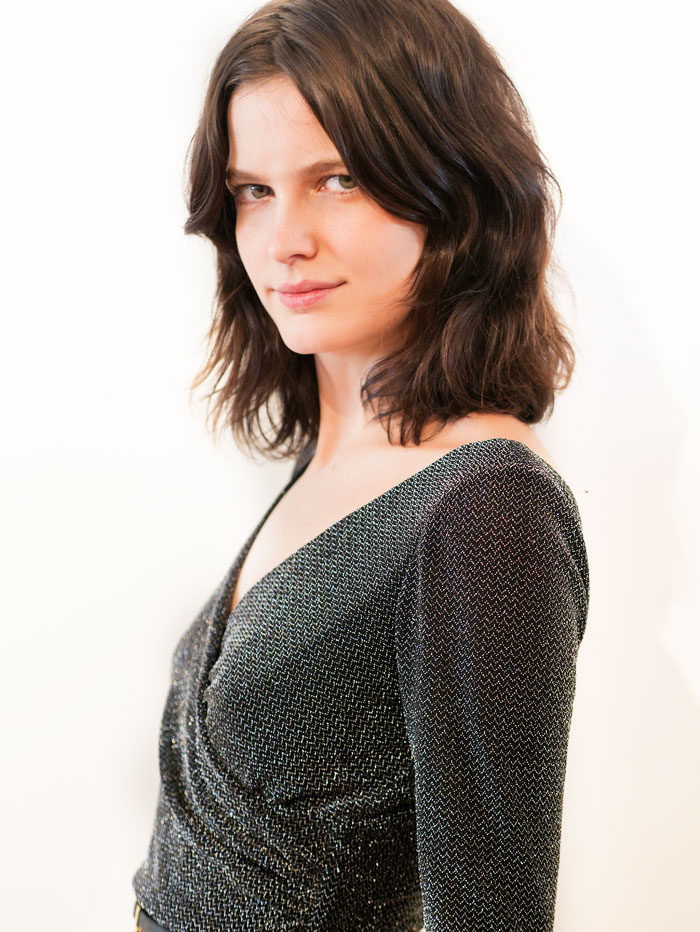 MEMORABLE MOMENT: I was really happy at the end that I did 60 shows, so it was really amazing for me. There were many moments which were funny, but also long nights during fittings and early call times. What I keep in my memory, was the first day in New York for BCBG and call time was 7:00 in the morning, which is fine, after a while you get used to the early call times. I was on my way already to the Lincoln Center and on the way I saw one of the casting directors, who is also a German. I grew up in Germany, so I have this kind of German mentality to be on time and be professional. On the way, we saw another girl from Germany and when we arrived there, nobody else was there at 7:00! We were wandering around like, only the Germans are on time! After 5 minutes there came another German girl. After about 10 minutes a Swiss girl came, and then after that everyone else came slowly. It was hilarious! 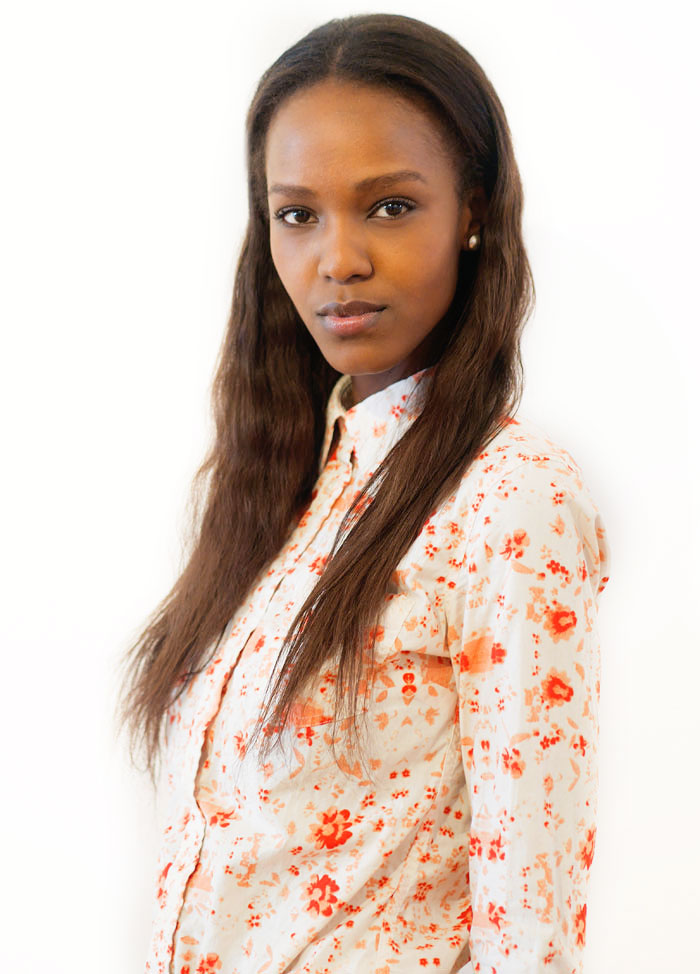 MEMORABLE MOMENT: My most exciting moment was the first time when I did the Victoria Beckham casting. This was my first real big show in New York and everything else happened after that. It was the most important start for me. She’s really nice, I spent all weekend with her and she was so humble and down to earth – it was great to see that even though she’s such a big star she still took the time out to compliment me and learn about me as well.

I also thought it was funny at the Versace show that they took so much time to perfect my eye-makeup – which looks incredible once it was all done, but  then I wound up wearing sunglasses in the show! 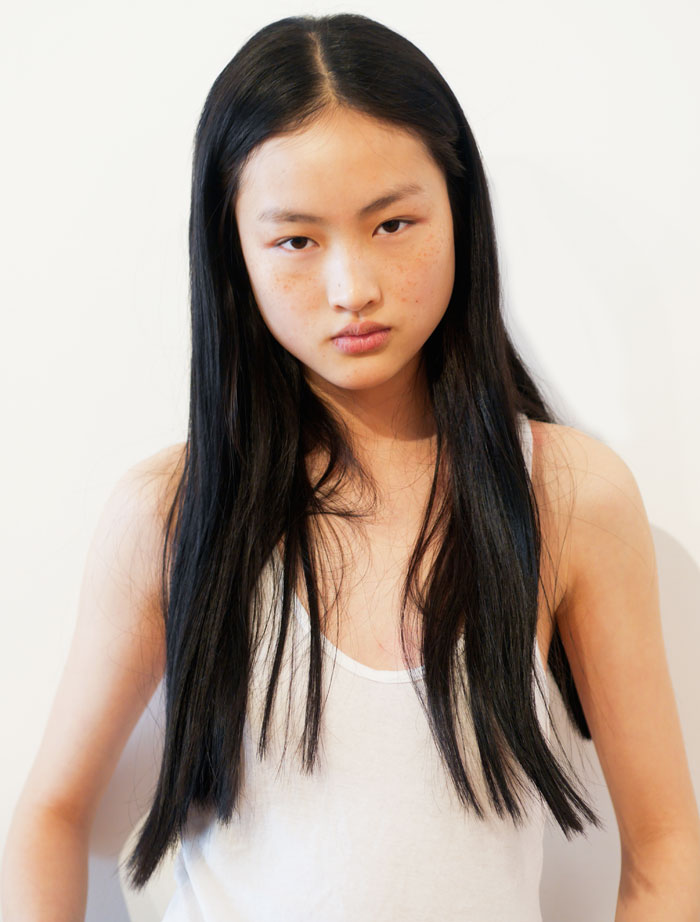 MEMORABLE MOMENT: I was so happy working for some excellent designers, like Marc Jacobs. Last season, Giorgio Armani, so I’m so happy. Also I walked with some amazing stylists, like Katie Grand and I got to shoot with Mario Sorrenti, so I’m so happy for that. 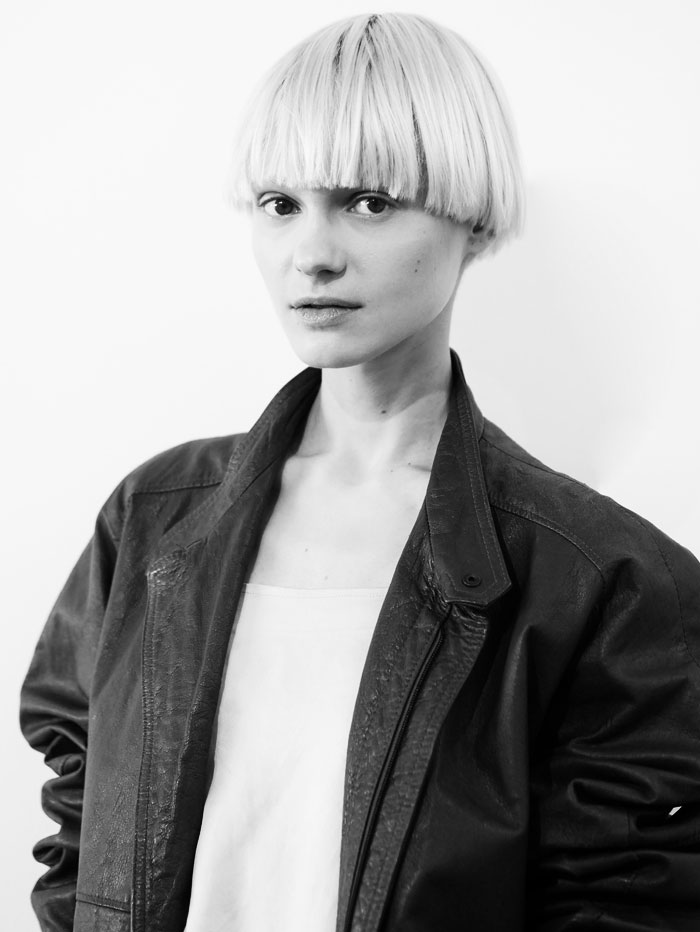 MEMORABLE MOMENT: It was closing Marc Jacobs show, it was very beautiful visually and the sound was amazing. Also, it was very very last minute. I didn’t know that I was doing it until last minute. I was having a glass of wine actually with my friend the night before and celebrating the end of fashion week, because it was supposed to be the last day. Then my booker called and she was like, “Oh, we have to rush you to this fitting, the Marc Jacobs fitting.” So, I went there and stayed until midnight but I still wasn’t sure if I was doing the show or not. I only got the great news the next day, two hours before call time! Last minute but incredible news to receive. 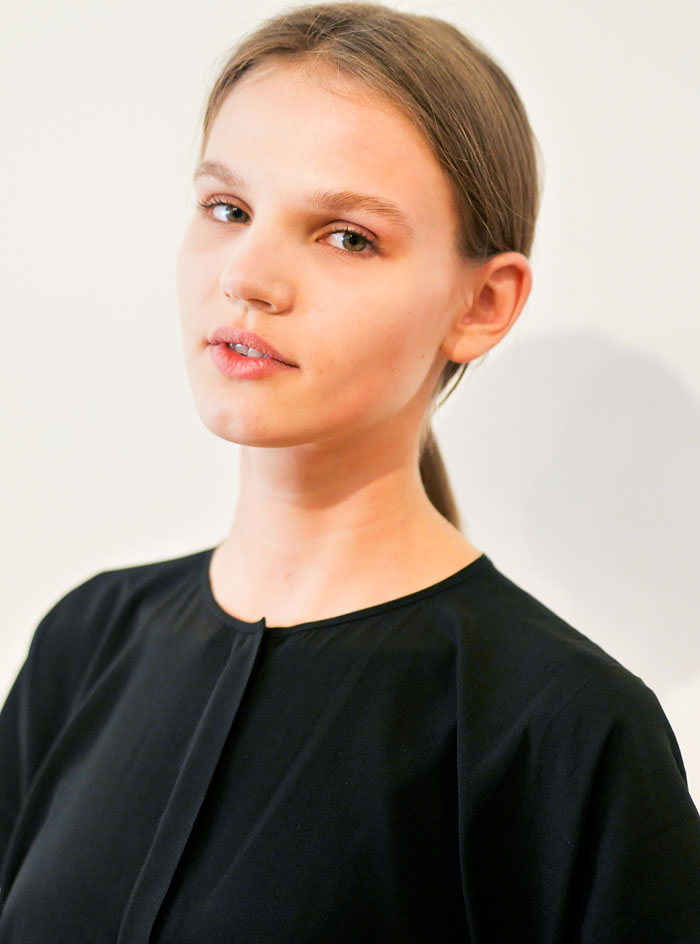 MEMORABLE MOMENT:
My favorite moment that stood out was the Vivienne Westwood show. It was more the performance carnival event because looking back and remembering all of the setting, music, collection itself, makeup, hair. It was all so creative and so exceptional. I think that the designer has an incredible personality and it made it really laid back and easygoing. It set the mood backstage and the show as well. I was very honored to participate and I hope for more such experiences! 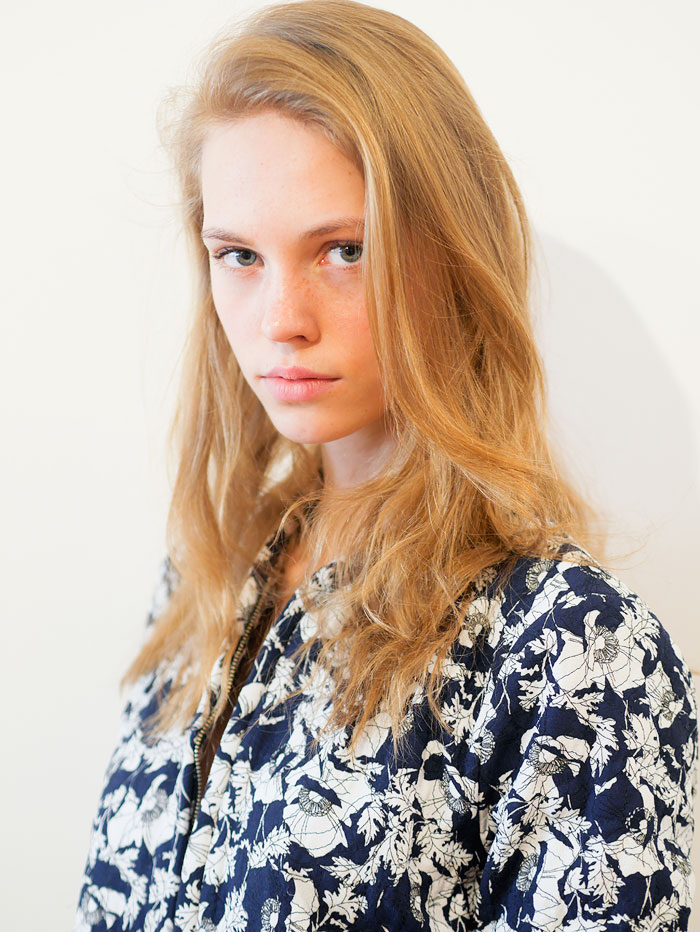 MEMORABLE MOMENT: My most memorable moment wasn’t even a show this season. I’m with Monster Model Management in Milan and all of the Monster girls always stay in one hotel together. There was one night (it was pretty much the end of Milan fashion week) and I was with my roommate, Carolina Sjostrand. There was also another girl, Alex March. We were all in my room and we were all really tired, so we just started goofing around. We stayed up really late and we all had a job the next day. We were sitting in bed doing all of these weird pictures and then Carolina started dancing around and it was just a really fun night. Sometimes you just need that when you’re working every day. It keeps things normal.