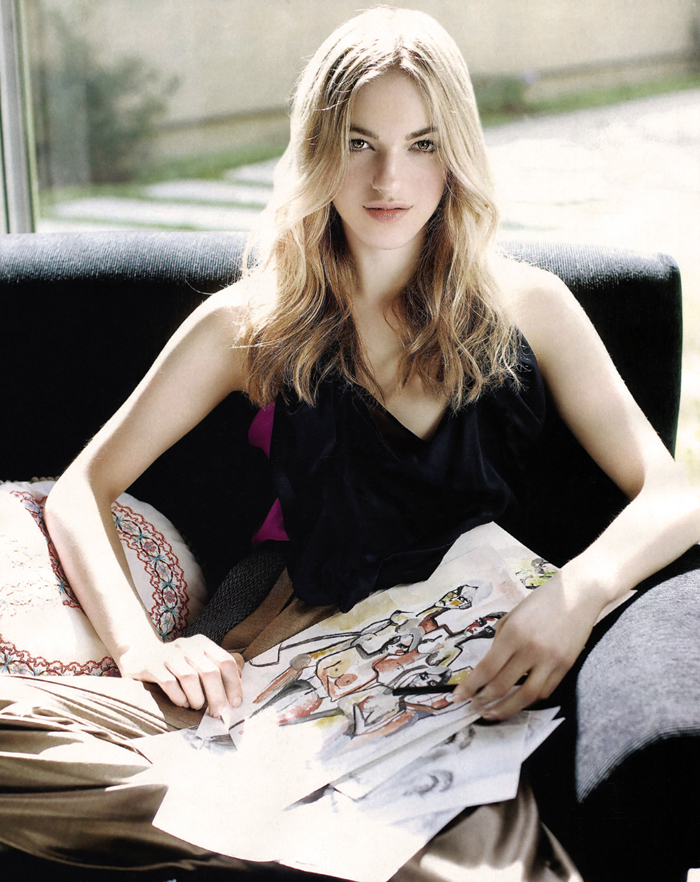 With her illustrations that call to mind the work of expressionist artists, model Naomi Preizler has become an in demand talent behind the scenes. From sketching backstage, to working with stores like Harvey Nichols to create fashion inspired artwork, Preizler merges her talents into a unique career. MDC caught up with the budding artist to discuss, fashion, modeling and which designer she’d love to sketch.

NAOMI: I have always been interested in art for as long as I can remember and was always encouraged to develop my artistic aspirations. My grandmother is an artist and my mother used to make her own clothes and customise bags so I was always surrounded by creativity and arts and craft. My mother even created an atelier at home for my sibling Tamara and I, and we would spend every Saturday making handcrafts. I always remember there was a cabinet drawer labelled “kids” which was filled to the brim with colourful sugar papers, glitter, crayons and temperas.

My parents also enrolled me in art classes at a young age and entered me into local art competitions (which I won). We also had a library full of art books which I would refer to and always acted as a huge source of inspiration. My art teacher would also would show us slides from the old masters’ pieces, which completely fascinated me to the extent that when I eventually moved to Europe and saw these paintings in person I would get emotional and even shed a tear.

2. What about fashion inspires you?

NAOMI: I’ve been passionate about fashion since I was a child and aspired to be fashion designer. I was obsessed with all the creations and stories behind the industry- the clothes, the designers, the models- and was constantly sketching clothes- never did I think that one day I would be part of it!

Fashion is a fantasy world which allows us to forget and be part of a dream which is continuously renewing itself. The people behind it are true artists and the models act as their muses. Everything is carried out with such precision and passion in order to create this concept. I also admire how fashion has allowed us to wear art and include it in our everyday lives.

As an artist I am interested in the female form. I love the idea that some designers create their art based around the female silhouette. I love strong women with unconventional characteristics and features. It was not until I started modeling and experiencing fashion, that I became more and more passionate about portraying this world. Sometimes I feel like a journalist; sitting backstage and at the castings wearing dark sunglasses and sketching the models and their outfits, but recreating them in my own personal style. 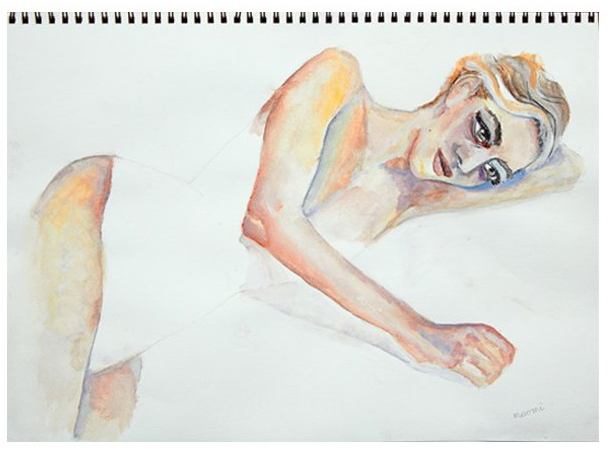 3. What inspires your art?

NAOMI: People. Strong personalities. Their ideas. Their shapes. Their stare. The eyes are so important to me when I paint. I have a lot of fun when I draw and paint and like to play with different styles and techniques when creating my figures as a way of catching a person’s character and interpreting it. I adore colours, and am not confined to working only in black and white: black is blue and white can be yellow. I play a lot with both warm and cold colour tones and with the wheel colour and its theory. I once had an Impressionist teacher who would drag me into deep discussions about it and would refer to Johannes Itten’s book “The Theory of Colour” as a guide.

4. What was it like to create something for Harvey Nichols?

NAOMI: It was an honour and a pleasure for me to be commissioned by one of the world’s most prestigious stores.

I was extremely flattered that they loved my work and asked me to work on an illustration project for their Spring Summer 2012 press booklet based on the Meadham Kirchoff collection. There was one look from the show which I played around with and ended up drawing as a self-portrait with me wearing that particular outfit.

I’ve had a lot of fun working on that particular project. I played the show on Youtube over and over again while I was drawing – I probably know all the looks by heart now. I also took inspiration from Sofia Coppola’s film, “Marie Antoinette” as well as Courtney Love’s songs for Hole.

It took me one whole weekend going to bed at 5 am each morning and juggling painting sessions with my modeling jobs. I ended up doing quite a few illustrations as it was something which I really enjoyed and I felt extremely proud of the end result. 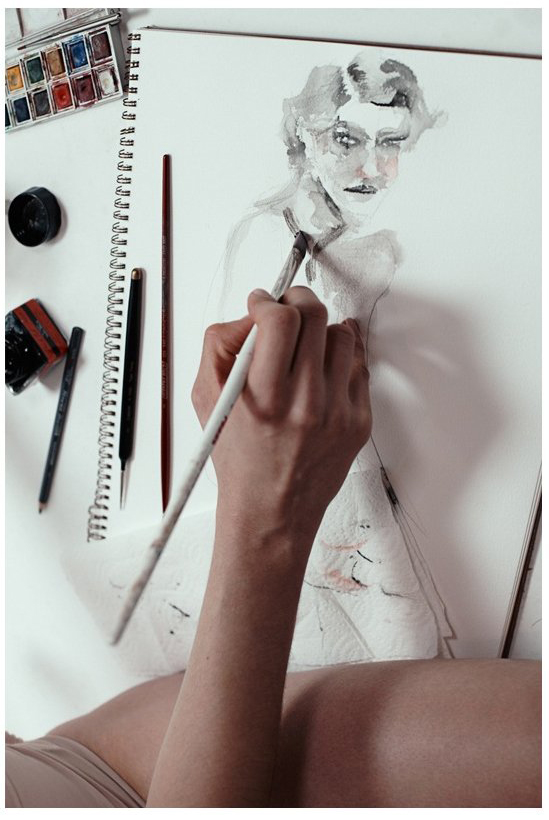 5. Do you have any specific goals you’d like to achieve as an artist?

NAOMI: Every artist would like to have a solo show. I would love to exhibit my work one day, but I’m such a perfectionist that I would only want to show the best and that takes time and dedication. I’m working on it. I’ve still got a whole lifetime of discovering life as an artist. But there’s one thing I know for sure; and it’s that I can’t do art without fashion and I can’t be in fashion without having my art. I would also like to have a book one day, with all my ideas, expressions and sketches; like a diary… something very personal.

I’m also collaborating with a brand in Buenos Aires on a capsule line of t-shirts that I’ve designed… it’s coming out in the next year. That’s something which I would love to develop as well.

6. Who are some of your heroes / favourite artists?

NAOMI: My favourite art era is the 1920’s in Vienna, Austria. The Secession with Schiele, Klimt and Kokoshka. I love German Expressionism as well, with Otto Dix and the Norwegian Edvard Munch. There’s something about the Expressionist movement that fascinates me, the way that they have changed art history by breaking academism’s restrictions. The expression supports individual freedom-‘I’m free to write, paint and say what I want. It’s the “inner me” who’s expressing after all’. Most of the expressionist painters had a life full of hardship and suffering so their art was very often deep and meaningful.

Lucian Freud would probably be my modern art hero as he’s the closest one to body expressionism and is capable of painting the “thick” of it. David Hockney’s pencil drawings, Elizabeth Peyton (I love her rock and roll style portraits) and the South African artist, Marlene Dumas as well. From the Argentineans, Marcia Schwartz and Antonio Berni.

8. Who has been your most fascinating subject thus far?

NAOMI: Definitely the designer Jean Paul Gaultier. I was doing the looks for his spring/summer 2011 show. For me it was like having the doors flung open to a true artist’s atelier. I learned how everything is put together into a unique concept from the sketches to the toiles. I felt so lucky and grateful to have worked so closely with him, that once after Paris Fashion Week was over, I drew a watercolour of him with Beth Ditto and sent it to his office with a letter. I didn’t expect to hear anything back; it was only because I really felt that Gaultier and his team had provided me with the most incredible inspiration and I learned so much about the artistry behind his craft.

9. Who would you love to have as a subject?

NAOMI: I would love to do a portrait of Marc Jacobs. I really admire the world that he has created around him and his way of life. He was part of the 90’s movement with the rock and roll and grunge art scene. Very revolutionary. I feel that I can identify with him as we are both Jewish and have thick eyebrows and strong features… an artist always end up drawing his own features unconsciously in every art piece.

Out of This World