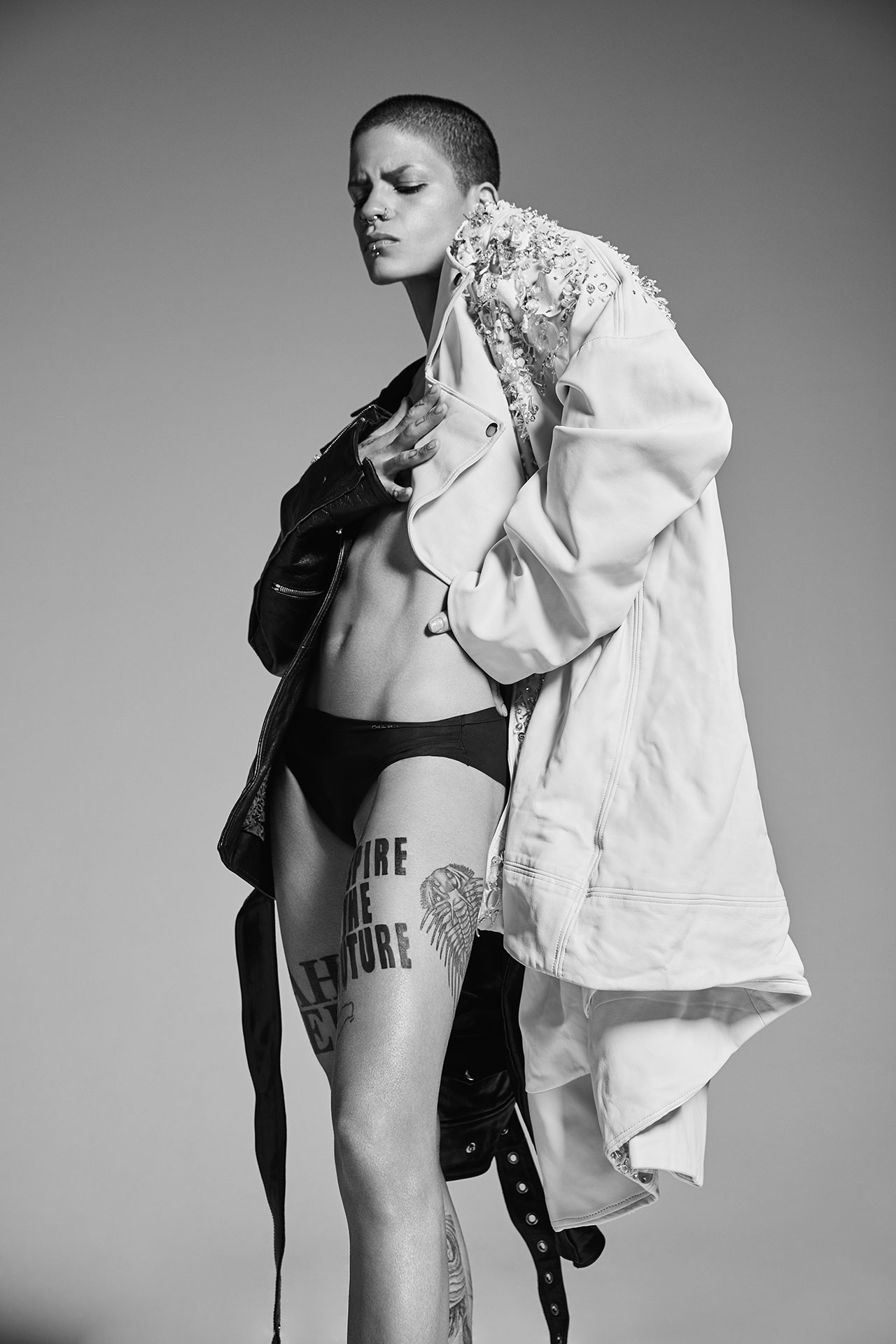 Piercings. Tattoos. Cropped hair. Omahyra Mota made a impact at a time when glamazons ruled the runway. After moving with her family to New York City when she was still a pre-teen, the Dominican rebel carved her way through the status quo with an edgy look and a legion of devoted designers fixed on her refreshing, punk vibes. The androgyne has since reinvented herself countless ways as a musician, actress and now artist her presence in pop culture maintaining the ever-present vibe of defiance. Adjusting swimmingly to domestic life with two kids, the model sits down again with Models.com to speak on being an advocate for Dominicanas, expressing herself through art, and working with legends like Jean Paul Gaultier, Ellen von Unwerth, and Helmut Newton.

What first led you to model and how were you discovered?
My mom had a lot to do with everything. I grew up in this creative environment; everybody in my house is a designer, a painter, or something and it was basically her pushing it. I remember being in the yard and playing with my friends in the neighborhood back in the day, and we would have this pretend universe and have an audience. She would always say, “You’re going to be a model. You’re going to be on Broadway.” So this was constantly my push, for me and my sister.

Then, I went to this school where they teach you how to walk or how to put your hand here and there. When I had my first real fashion show in the business, I already had done a few things for an audience. It was almost understanding the language. But it was hard at the beginning because it’s a lot. You’re working with these people that are amazing in their craft. It was a lot of pressure and you’re a teenager. It was hard at the beginning to be able to lose the fear, own it, and do my job right.

It’s funny that you talk about having to lose that fear because from an outside perspective you seemed like you had a rebellious aura. How did you feel when you first were coming onto the scene? You had what some people would describe as an androgynous look.
When I first started I heard a lot of “too strong, too much, too everything”. It was always too, too, too! Also, when I started working there was this wave of bombshell, beautiful chicks so we didn’t really blend together. But even though I was too much at the very beginning, all of those things worked towards my advantage. That insecurity that I had when I was a teen, I put all that energy into the runway and this attitude of I can’t let this wear me, I have to wear it.

I want these people watching to have an experience because there are designers that put a lot into this. It’s almost like an art show, for me. Also, as I said, I walked in at the right time; it couldn’t have been before and it couldn’t be after. It had to be on His time. It changed the way people see beauty and fashion.

What moments were the most memorable to you?
Paris was angelic, it really took me under its wing. They were all really excited to have me over and inspired by my look, by my energy, and my edginess, the androgyny. They were eating it all up! I’m really thankful for that because I didn’t feel uncomfortable. I felt more natural over there in Europe.

Are there designers in Paris that you loved walking for?
Yeah, Jean Paul Gaultier. All his shows were an experience because his stuff is already amazing. Just being back there and seeing all these pieces one-on-one, touching it, wearing it. Also, working with different photographers, like Ellen Von Unwerth; her book and all those shots I did with her. She really believed in me and took me under her wing. Albert Watson! It was really something. The labyrinth of Marrakesh, I was taken there with Albert. Helmut Newton took me to shoot in Monte Carlo. I was always thinking I was on the set of a film. It’s in the back of my head still, like I can still taste it.

Being used to being on elaborate sets makes sense you were easily able to transition into acting. Was that always a path, saying, “Okay, I want to challenge myself.”
For me, it was exciting and creative as well, so I wanted to be part of it too. If God opens the doors, of course, I’m going to go right in.

The industry has just earnestly started really pivoting towards more diversity and inclusion and you’re part of this Dominican Republic wave of models. What major challenges did you face as a model when you were first coming up?
Mostly, I have to say, being away from my family, because I was never really alone at places but I was really young. Dealing with new people. There were just some clients that were not big on my look because it was disruptive and really strong. But I already had the people that I worked with, so I just went with that. I understand they’re not obligated. I work with whoever I work with because it works for the look.

When I was modeling there was this wave of Brazilian girls, and I kept on saying to my agency, “You guys should go to the DR.” They always would go to Brazil to get these chicks. I always put it in their mind there’s a lot of beautiful girls in DR, a lot of potential there it just has to be given the opportunity. To be able to be seen by someone you have to be in the right place at the right time. 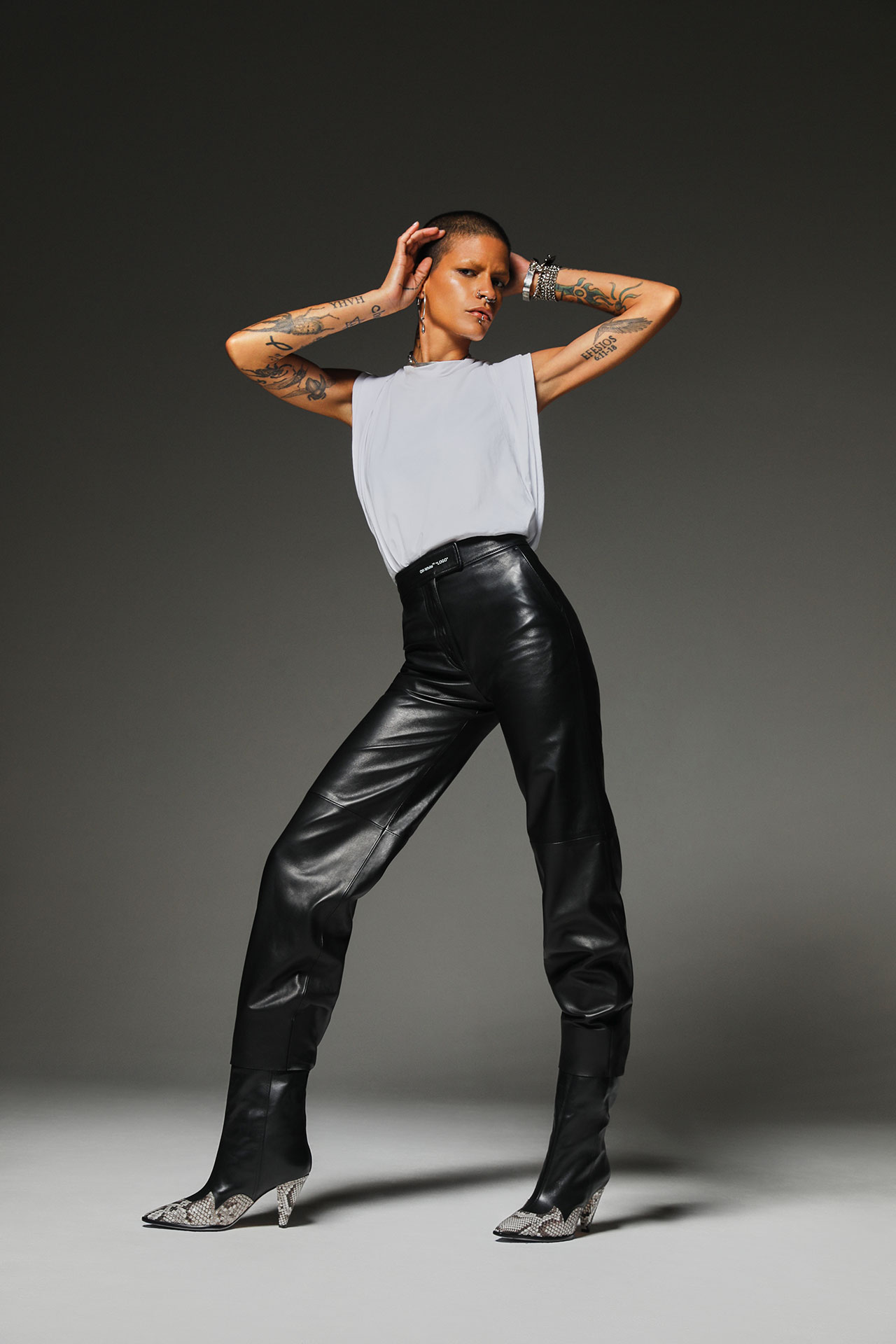 I think the internet has helped that too. The scouting process has been able to get more democratic because if you can’t physically go there, at least you can just show someone their picture digitally.
Yeah, exactly they’re getting it. They’re opening more agencies there and they’re going nuts, which is good because these girls need the opportunity. They work hard, these girls. They don’t come from money and they deserve these wonderful experiences because they have the heart.

You’ve recently transitioned into the art world and you were at Art Basel in Miami this past year. What does it mean for you to be able to express yourself creatively?
It is very important for me, because usually when you work for other people, you’re there working with their ideas and to help their vision come true. But when it’s you taking over, now you’re in control. I’ve always done this, it’s just that I never shared it because it’s like my baby. I am exploring it now because I feel like it’s time to do it. It’s important for me to express myself because that keeps me sane.

What normally inspires you when you’re creating your art? Do you have any particular subject matter? Are you more excited about expressing colors? Describe it if someone never saw it for the first time.
I taught myself, so I go usually by feeling, to be honest. Depending on my mood, or what the canvas wants, I just let it be. I try to have some kind of control but in the end, it does what it wants.

Is there any medium that you always try to use, or are you just free, do you just use everything?
I’ve only used acrylic because it dries quickly and it works for me for the kind of work that I want to do. Of course, I’m going to keep on exploring things because it’s fun to explore things in this world. But, acrylic, canvas, is what works for me.

This job with Levi’s at Art Basel was a blessing and an opportunity to come out as an artist and be on a platform. I was just really happy that they were down to do it. I had to show them my work and stuff, so it was cool, and they were really cool people.

How has it been juggling your career and motherhood? Have you had any bumps in the road?
It’s been a little bit rough because you really have to be there and it takes all your time. My kids are seven and two, they’re two girls. I have to work in the middle of the chaos. If I’m doing three things, I do four or five at the same time. Just it’s a lot being a mom, an artist, a designer, and a wife too. Chaos gives birth to good art, though. 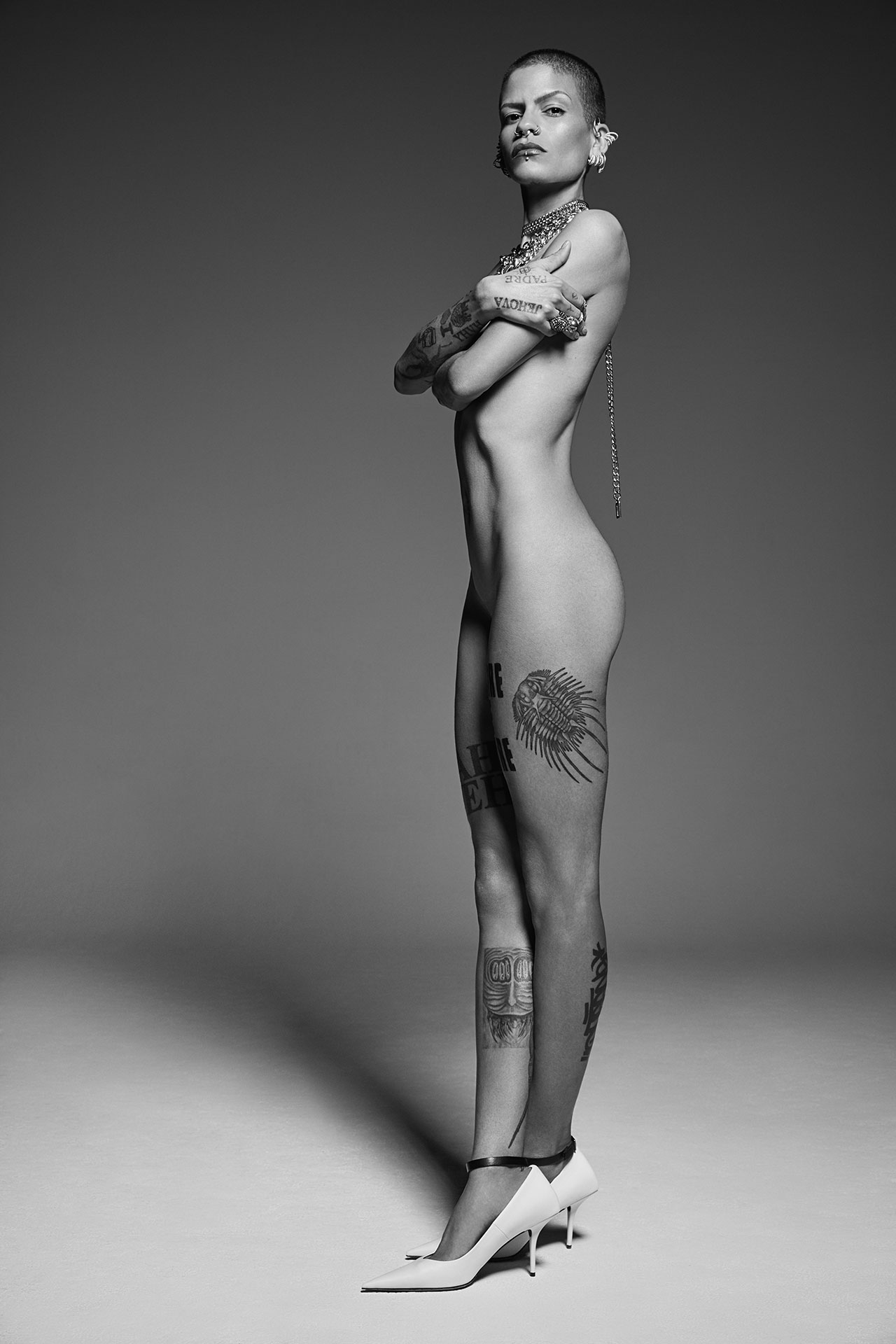 Being a veteran in the game, what advice would you give to models looking to become successful in the business?
Be 100% a team player. Every photoshoot, every fashion show is a learning experience. Don’t ever be late, be punctual. And be sober too. This is not about competing with other models, it’s about you learning and seeing how far you can go and learn about yourself. Even if you’re just standing in front of a camera, you’re there also to make it happen, so put your back into it because at the end of the day you’re doing it for yourself. Walk out of there with your head up like I did my part and I pushed it.

Is there anything that you’ve wanted to do, that you have yet to accomplish, like modeling or otherwise? What’s next on your plate?
I have this project to do in my country, up in the mountains. We’re going to do like a big center for the arts, music, pottery – the whole nine yards. We already have the land, but we have to finish building. This is for the kids, so we can just expose them to the arts, me and my sister. When the government does something in our country like this, it doesn’t really work. Somebody else took the money, and we don’t know what happened, or they’re not doing shit.

What made you first want to do it?
My sister has always wanted to do it. She wanted to do a thing in general for the kids that don’t have any home. She’s going hard, and I’m just there supporting her because I feel like her intentions and her ideas make sense, and it’s just us giving back. And so giving back and just doing good stuff so good things can keep on happening.

It also calls back to that first story that you told me, about how you and your sister used to put on performances for your mom. Giving kids the opportunity to find the creativity within them, feels very full circle.
You don’t know that you like things until you’re exposed to them, and then you can make the decision. I’m talking about music, arts, dancing, everything. We’re going to have the best teachers in my country teaching little kids there, one on one. From there on it’s on them, but we want to do that. That’s my next step. Take Stock: Alexis Ruby, Alva Claire and More of the Models Making the Biggest Moves
NEXT Matthew Noszka Is the Latest Model-Turned-Actor Hitting Your Screens