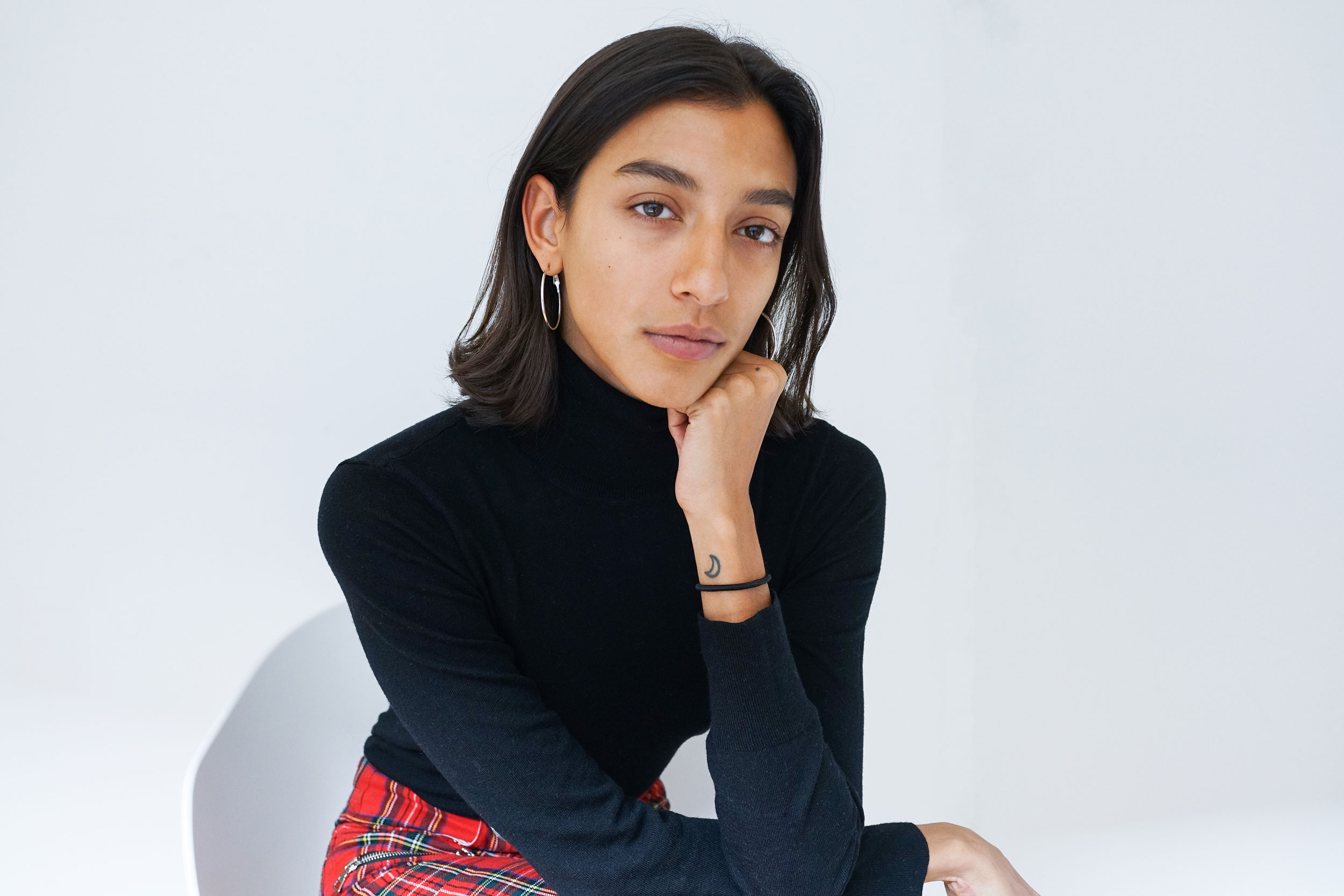 A swift ascension could overwhelm any added recruit to the ever-growing, global model army. Yet, new face Hayley Ashton has been able to keep a level head with added successes at every turn this year – a debut editorial shot by Mert & Marcus led her into her debut fashion week season where she booked top casting spots at Bottega Veneta, Mugler, and Miu Miu. Since then, she’s returned to sunny LA for a bit of a respite but stopped by Models.com NY offices to briefly discuss a fruitful year. We spoke to the rookie about the road to discovery, trials of unpaid invoices, and what fashion month is really like.

I wanted to go back to when you first started, how did you get to discovered? How did your journey first begin?
When I was 17, a lot of my friends were photographers and I would always shoot with them. I lived in Arizona for four years, so I just would shoot with them and play around, play, dress up. Once I turned 18 I was like, “I don’t want to live in this hot desert city anymore. I need to go somewhere.” My best friend, Madeline, took me to LA and I met so many people so I packed up all my stuff in my car and just drove up by myself before she could move out with me. I was just doing a lot of commercial work. I wasn’t doing anything super high fashion, but I knew that’s was where my passion lies and that’s all I ever wanted to really do. But at first, when I moved to LA, I was just trying to make money any way that I could.

Which is important.
I was in Bali and my friend, Alexia, who has the brand Miaou – she was doing a fashion presentation back in New York and I wanted to be in it, because I’d never been in fashion week. So I came to New York after like 10 days in Bali and had an insane sunburn. I was in her presentation and my mother agent now, Kevin, was doing the casting for her. Once he saw me, Kevin was like, “Who are you? Are you represented by anyone? I’d love to send you to some people.” He did Polaroids of me, sent my video to a bunch of people and while I was there visiting New York for a week, I met with my New York agency now Muse. I wasn’t ready to commit because I knew if I signed in New York I would have to be out here for a while. Everything worked out.

I saw that you shot with big names before you even stepped foot in New York. How was that experience and what did you take away from that?
I feel like it was so important for me to do that because it was like an investment in my career. Anthony Turner on hair, Olivier Rizzo doing the styling and Lucia Pieroni doing makeup. It’s like this insane top team, you know? I met so many cool girls on set, made some friends in London and it was my first time going there. Olivier was the sweetest stylist ever. He just held my hand through the showroom and was like, “What do you want to wear?” He laced me in Prada and Mert & Marcus are very open about how they want you to pose, which I like that they give good direction.

So how was your first fashion week experience throughout the whole month? Was it surreal to finally be doing the full fashion circuit?
It did feel like a dream because once I went back home to LA, I was like, “Oh, I’m back home now and nothing’s changed here.” In LA, fashion doesn’t exist too big so I had no clue where fashion week was going to take me. I packed very minimally as it was still summer in New York and I just remember everything being so last minute. I had to ask my friend if I could borrow their trench coat and wore it every day, with black slacks and a turtleneck.

The fashion uniform. You mentioned that back home no one was checking for all these things that you’re doing.
It felt like it didn’t even happen. I didn’t have any expectations and I usually don’t with this type of industry or else you’ll get your hopes up. So I just was like, “Okay, I’m just going to go with the flow. Whatever happens, happens.” I was gone 39 days and I didn’t expect it. By the last show with Miu Miu, my whole makeup and hair look was the depiction of how I felt after fashion week, with big hair and mascara running down my face. I didn’t expect a lot of things, honestly. Even Mugler and the fact that I was number two after Bella…that’s just kind of crazy to have that happen. But Haley Wollens was the stylist and said, “Your name’s Hayley, so I’m just going to be on your side.”

What were you thinking about when you went down that Mugler runway?
Honestly, I don’t know. I was just trying to stand tall and confident. Just really focusing on the cameras and walking down the middle straight. But when I walked for Bottega [Veneta] I was so insanely nervous because it was the first big show. The shoes were so uncomfortable and the runway was so long that by the end of the walkthrough, everyone was so tired. We needed someone to have little Gatorade cups of water.

Do you have anyone that you look up to in the industry, – model, creative or otherwise?
There are so many cool model girls that I met during the show season, like Adut Akech. She was so sweet. And I met Adesuwa on the plane to Milan. She was so cool. I just really appreciate these different people running the fashion industry now. It’s a great time to be different and just rep who you are. And honestly, I feel like anyone, if you want, can be a model if you just believe in yourself.

Do you have any advice for up-and-coming or inspiring models?
Advice? Just be confident and just know that the universe always has your back. If you believe in yourself, there’s really nothing to worry about honestly. So many people are always so worried about what other people think.

So you’re still new in the game in New York, but you have been modeling for a bit. What’s one thing that you would change about the industry if you had a chance?
Well, it sucks because, with fashion, it’s such like a wasteful industry, you know? With the production of clothes, it’s like people are always trying to consume and buy and buy and buy. I think that more brands should do made-to-order type of things. I feel like that’s just a smarter way of making things because it’s like then you know the person’s buying the product, they want it. You don’t have to mass-produce so many things. What if you don’t sell these a thousand pairs of jeans and it’s just going to waste? At least give it to people who need clothes. Also, using organic materials and natural dyes. There are so many things that can be changed, but being a more sustainable industry would be the best.

What’s one thing that you wish you had known before you got into the industry?
One thing I wish I would know. I wish I would know from the beginning that you aren’t always going to get paid on time. When I first started modeling I was like, “Okay, I did this job, where’s my check?” It was for American Apparel but they went bankrupt and I didn’t get my money while I was on all these billboards all over the world. I was pissed because I just moved to LA and I was really hoping on that check but it’s fine because other things came my way.

You mentioned your family earlier. What do you like to do when you’re not modeling?
I love to cook. I have a food blog called Stoney Snax. I’m trying to develop recipes so I can have a newsletter or possibly a cookbook. Cooking is like the one thing that is my deep down passion. I’d love to maybe open a restaurant one day or have a pop up with food.

Final question. What’s a dream job for you in fashion?
Well, it’s funny because when I was younger, I made this business card, “Manager of Gucci.” I do think about creating clothes all the time. I like tech-y, raver style, industrial vibe. But I mean, I love to model. I feel like I’m doing my dream job now.