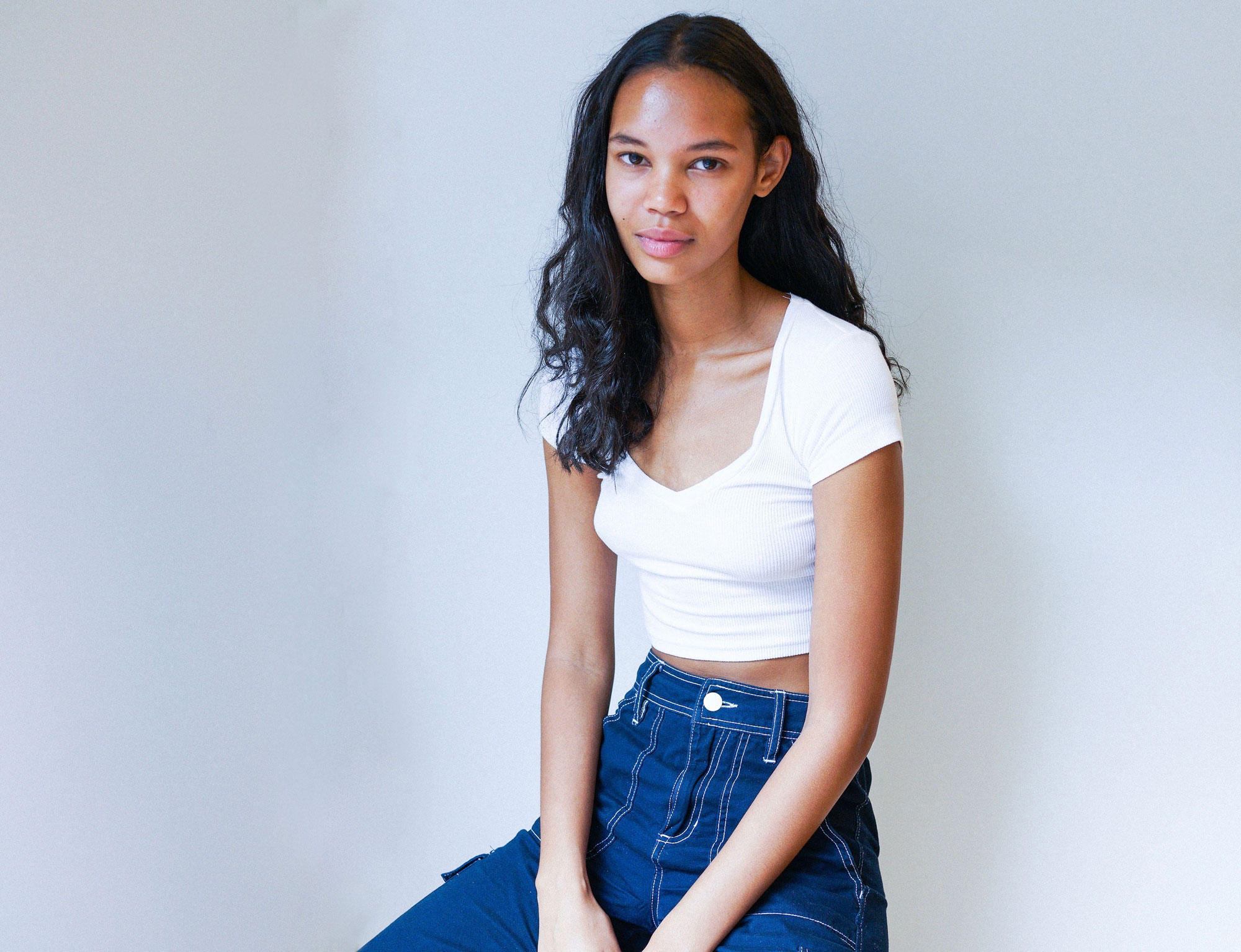 Since she emerged a year ago at Prada S/S 19, the statuesque, lithe frame of Jordan Daniels has been navigating through the choppy waters of the modeling world, gaining high profile clients along the way. A perennial runway favorite, the New Zealander has settled into her new New York home just fine as the creative teams for Allure, Interview, Love and British Vogue magazine have started calling upon her to showcase the latest trends. Before she prepares for another fashion month, we spoke to Daniels about her beginnings in the business, understanding race, who she looks up to in fashion, and the sound advice she would give to any model just getting their start.

Your family is from South African but you grew up in New Zealand. How did race play out in those two different communities?
My parents always raised me in a very different way because they experienced apartheid in South Africa and so did my grandparents. Growing up in New Zealand, we’re the most culturally diverse country in the entire world – just the nicest people. When they brought me up there they knew that I was eventually going to go out in the world and my mum always told me, “you never experienced apartheid. We did and we told you stories about it. Even though you experienced a great life, that’s all your roots, that’s all your ancestry and that’s all you come from.”

My great-grandfather on my mum’s side was full British, moved from England to South Africa. He was in the Second World War, he met my grandmother in South Africa who was mixed and married her. They moved in together, had ten kids, and when apartheid was going on the government said to them, “you’re going to have to either leave this area, take your wife and your kids, and go to the colored area, which is lower status. Or you can stay here but all your kids and wife have to leave.” So they all left and they went together. It was a weird concept for everybody to grasp that this is just how everyone is classed now.

So, I never really experienced racism growing up. I have that thing where I’m educated on racism – what happened, how they grew up and what they went through, but then again I grew up on a different level of privilege. Then I came to America for my first overseas experience as a model. It was three years ago and I had just turned 19 years old. I was just going to come for six months and see if I could make it, see what would happen. When I first came to LA someone said, “oh you’re black, but what’s your mix? You look like you could be Asian, you look really fair”. I responded, “I’m not black” and then I called my mum and was like, “mum, this guy called me black, it wasn’t a bad thing but I’m confused,” and she was just like, “well there you *are*.”

How was your experience doing your first season of shows? Were you nervous? Did you have any training or coaching? Or were you just thrown into the fire?
It’s crazy, I feel like it’s half-half. The agency does kind of prepare you but then nothing prepares you more than actually doing it. It’s kind of serious, there’s a lot of people here, a lot of beautiful girls, and you’re just kind of thrown into this mix. I came here to New York with my mum first from LA, and the feeling I got when I came, I never got that feeling in LA. We got off the plane, and we were walking around somewhere like Soho, or whatever, and I said, “Mum, I actually belong here.” She was just like, “I know you do, I can feel it.” I was looking around at the familiar faces, the energy, the culture I could feel that was out walking on the streets. I felt like this was my home. I knew that I wanted to make the move from LA to New York and try my luck out here.

Was it an easy transition?
I had an agency that was really awful and they kept me there for a long time and told me that I wasn’t ever going to do high fashion. I eventually just left and came to New York, and just tried my luck. I pretty much sat around here and got used to the city while waiting for my visa to come through. I skipped New York fashion week, went straight to Milan and I did my first show, which was a Prada semi-exclusive. There’s nothing that prepares you for it, to walk in a huge show like that.

Who do you look up to in the industry?
I look up to Adesuwa [Aighewi] a lot actually, she’s a good friend of mine. I look up to the way that she’s so true to herself. She’ll walk away from anything that isn’t right for her, she’ll speak up, she isn’t afraid to come out and say what she feels but also again she’s a really talented model and creative. I feel like it’s really important to be there for the culture too, and after meeting her we realized we have a similar way of thinking.

I look up to so many people. I really look up to Katie Grand. She gave me a really big chance in my first season, where she did Top Newcomers of the season on Models.com and from there she booked me for so much stuff which is what you need. Someone to believe in you, especially after doing your first season of shows. I look up to her and the power in the industry that she has. She’s amazing. She does whatever she wants. She discovered Tomo Koizumi here in New York. She got everyone in his show, it was nuts.

What’s your favorite part about modeling – runway or photo shoots? Or is it equal?
I think it’s equal now. Photoshoots are more creative for me and I feel like I’m going to be part of a story. But then the runway is cool because you get to be with your friends, your community, a bunch of people hanging out. You’re wearing your beautiful dress, and you don’t see the preparation that goes behind to getting to that point. The fashion show is for three minutes and then everyone keeps going about their life.

What do you think the biggest misconception about the industry?
You’re not going to be having loads of makeup all day long, having a great time laughing with a glass of champagne. There’s a lot of hard work that goes into it and besides that, it can be emotionally draining. I’ve spent three years away from my family now and every time I go home one of my brothers are taller. It’s part of their lives that I miss out on. I’m so deep in it and this is my career goal, my passion and this is what I love. But, they’re missing out having this because I’ve left, do you know what I mean? Right now they’re 14 and 15. The youngest one is 14 and he’s autistic. Thank god for FaceTime. My mum used to model when she was my age. I talk to my parents at least twice, three times a week. It used to be more, but it kind of tones down a little when you’re away. I have a supportive family. I feel like having a brother with autism too gave me a lot of life skills and taught me a lot of things about people skills and communication. Understanding people and how different they work – it’s always hard to leave them behind.

What some advice that you’d give the next generation of models coming up?
I was shooting with a couple of kids with Tyler Mitchell the other day and they were asking me for my advice, and I was just like, “save your money,” and they were so shocked. I said, “it’s cool for now, but in five years you could buy a house for the money you’re getting. It’s not out of the park, you save this much of your money.” Get an accountant, be aware what’s going on, and don’t let anything pass over your head. We need more people in the industry that are not just trying to ride their own wave. 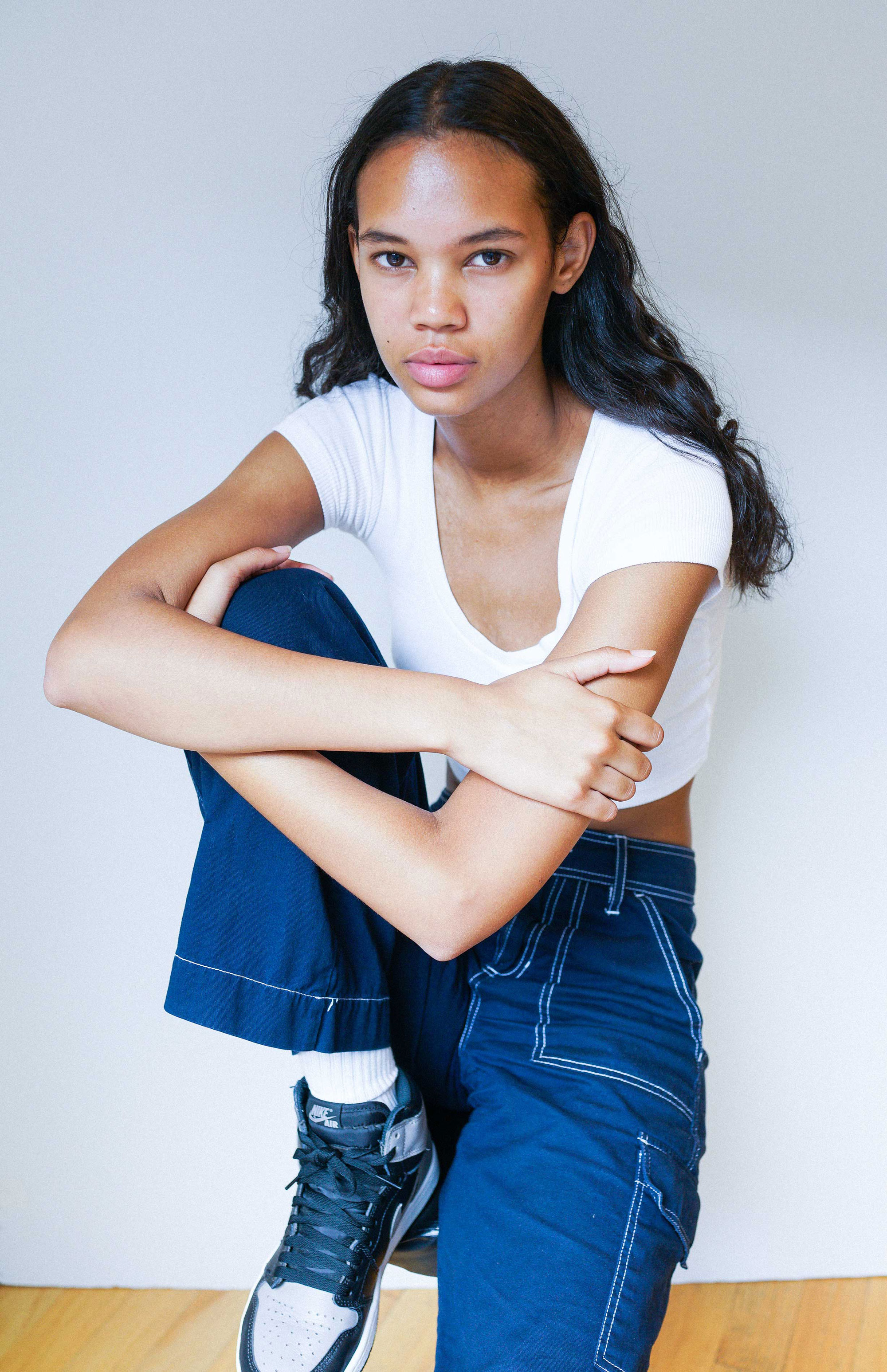 Ashley Graham pregnant, Hudson Yard relocations and more of the news you missed
NEXT