Highlights from Milan, and Eddie Campbell Posts Brand Called her “Too Big”
Milan Fashion Week is well underway, and we gathered the newsworthy takeaways to date: Pierpaolo Piccioli’s breathtaking Moncler puffer dresses left an impact; Gucci returned to Milan after a Paris hiatus and presented a show inspired by “The Human Condition” complete with face masks and Alessandro Michele-levels of organized chaos; Fendi paid tribute to its late creative director, Karl Lagerfeld; Daniel Lee sent his F/W 19 down the runway marking his maiden show at the house’s helm; Prada enlisted an army of first-timers while Versace spared no expense casting veterans like Stephanie Seymour, Shalom Harlow, Mariacarla Boscono and more. Edie Campbell also walked Versace, as well as Fendi, Tod’s and Etro, but on her Instagram, the model who has previously been vocal about industry issues, posted a story saying a brand (without saying which) said she was “too big” to open the show, continuing, “and by too big I don’t mean too famous I mean too fat.” 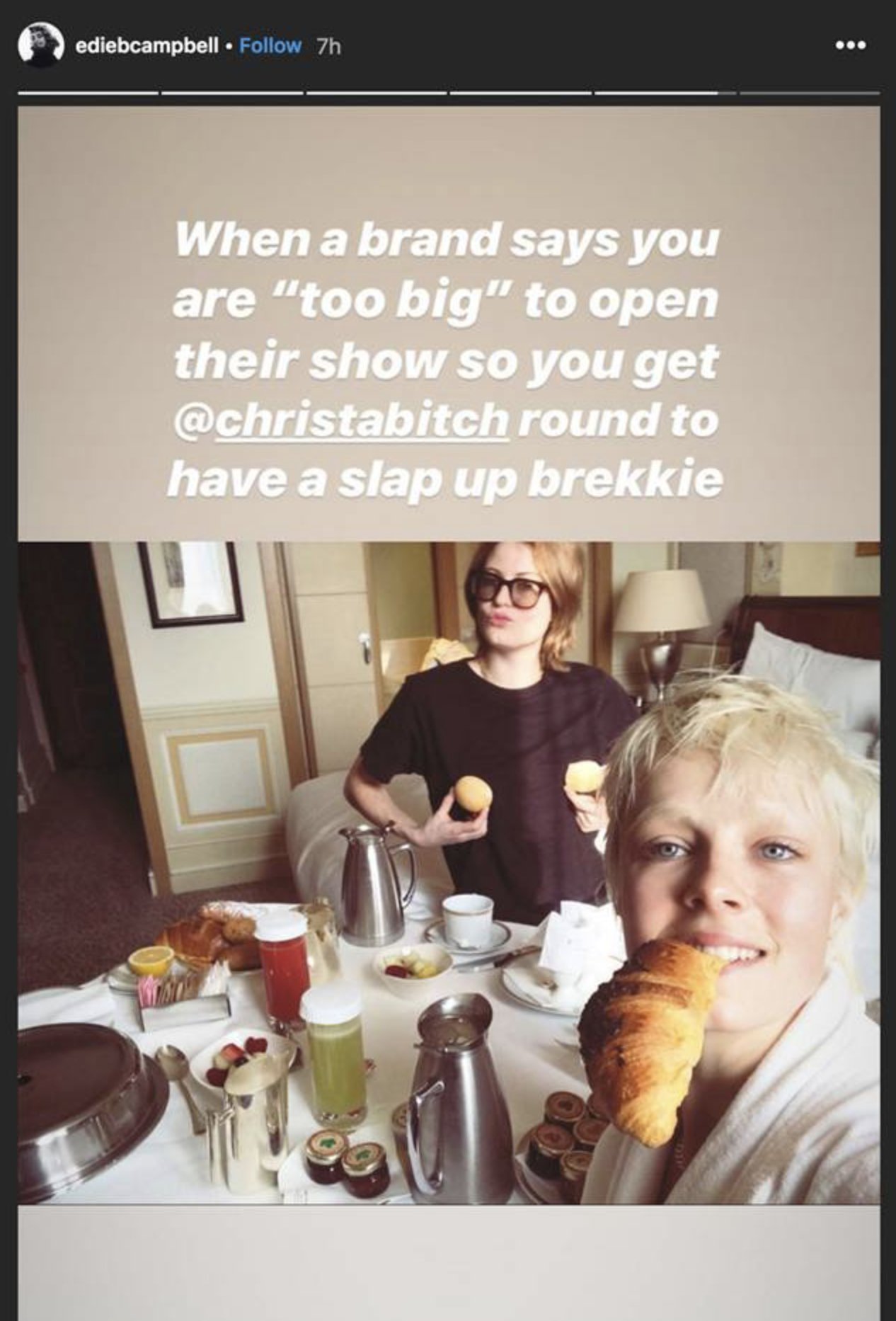 Karl Lagerfeld Passed Away, the Industry Pays Tribute
Sadly, Karl Lagerfeld passed away at 85 years old, news that affirmed the reason for his absence from Chanel’s haute couture show in January was a decline in his condition. Lagerfeld, perhaps one of the industry’s most legendary and well-known designers, was remembered by countless moving tributes from insiders and outsiders alike, testament to the reach of his name. Fendi honored its late creative director with a logo remimaging and a “Love, Karl”-laden runway. Part of “Karl Lagerfeld Sketches His Life,” the documentary from Loïc Prigent, was also run after the show. Chanel, which Lagerfeld held his creative director position at since 1983, will also be paying tribute during its March 5th show.

Burberry, Riccardo Tisci Apologizes for Insensitive Noose Hoodie
In face-palm, tone-deaf news, Burberry sent a sweater down its F/W runway that bore noose knot strings. The sweater, which has since been removed, seemed to insensitively overlook the obvious elicitations to suicide and lynching. Liz Kennedy, a model who walked the show, took to Instagram to call out the brand writing, “Suicide is not fashion,” continuing, “The issue is not about me being upset, there is a bigger picture here of what fashion turns a blind eye to or does to gain publicity.” Tisci has since responded, First of all, I‘m deeply sorry to anyone whose feelings I unintentionally have hurt. I am a man of my principles and I take my responsibilities seriously. I am committed to learn from this so that this never happens again.” [WWD]

@burberry @riccardotisci17 Suicide is not fashion. It is not glamorous nor edgy and since this show is dedicated to the youth expressing their voice, here I go. Riccardo Tisci and everyone at Burberry it is beyond me how you could let a look resembling a noose hanging from a neck out on the runway. How could anyone overlook this and think it would be okay to do this especially in a line dedicated to young girls and youth. The impressionable youth. Not to mention the rising suicide rates world wide. Let’s not forget about the horrifying history of lynching either. There are hundreds of ways to tie a rope and they chose to tie it like a noose completely ignoring the fact that it was hanging around a neck. A massive brand like Burberry who is typically considered commercial and classy should not have overlooked such an obvious resemblance. I left my fitting extremely triggered after seeing this look (even though I did not wear it myself). Feeling as though I was right back where I was when I was going through an experience with suicide in my family. Also to add in they briefly hung one from the ceiling (trying to figure out the knot) and were laughing about it in the dressing room. I had asked to speak to someone about it but the only thing I was told to do was to write a letter. I had a brief conversation with someone but all that it entailed was “it’s fashion. Nobody cares about what’s going on in your personal life so just keep it to yourself” well I’m sorry but this is an issue bigger than myself. The issue is not about me being upset, there is a bigger picture here of what fashion turns a blind eye to or does to gain publicity. A look so ignorantly put together and a situation so poorly handled. I am ashamed to have been apart of the show. #burberry. I did not post this to disrespect the designer or the brand but to simply express an issue I feel very passionate about.

Zendaya is Newest Lancôme Global Ambassador
Actress Zendaya is have a meteoric rise what with her new HBO series “Euphoria”, new collaboration with Tommy Hilfiger debuting in Paris next week and the latest announcement that she’ll be the new Lancôme Global Ambassador. The former “Cover Girl” joins Hollywood heavyweights that are aligned with the brand like Julia Roberts, Lupita Nyong’o, and Penélope Cruz. [WWD]

“Camp” Goes to Milan
A few months from now fashion will be dialing up the kooky factor for the annual Met Ball and new Costume Institute exhibition, Camp: Notes on Fashion. As a preview to the press, the Metropolitan Museum of Art hosted a small exhibition at Teatro Gerolamo, in Milan, Italy, featuring pieces from Viktor + Rolf’s recent Spring couture show, Palomo Spain and onGucci. The official exhibition opens to the public May 9th. This Model is Having a Runway Resurgence
NEXT See what the models are wearing off-duty in Milan! Days 4&5