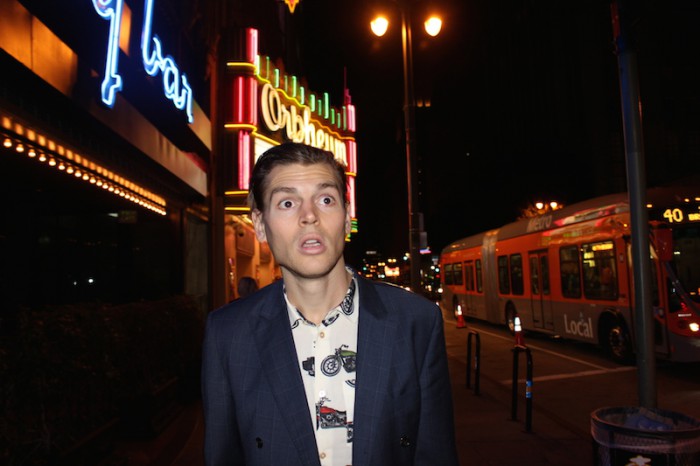 Street casting is a trend that’s tried and true, but few have done it with the edge and sense of purpose of Ian Jones and Tali Lennox, who embarked last summer on a project photographing homeless youths they found around their East Village apartment. The polished street kids landed in a full fashion editorial last fall in high­ end Grey Magazine and a citywide poster campaign sponsored by Diesel. Meant to highlight the rising homeless population in New York today, especially youths under twenty­-four, the Street Kids Project —which unites Jones’ photography with Lennox’s paintings—serves the dual purpose of both shedding light on an often­ overlooked group while also offering a sense of self ­worth to the subjects themselves. With MTV signing on Jones to produce a documentary on 2 of the subjects, expect much more this August. In an interview with Models.com, Jones and Lennox discuss their artistic process and the project that’s changed their lives. (All photos courtesy of Ian Jones) 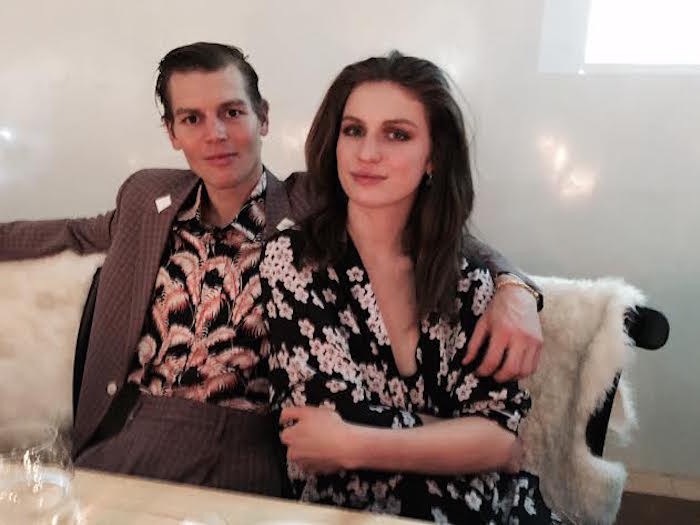 How did you first become interested in this project?

Ian: I had been photographing youth as a hobby, and Valentina, the editor-­in-­chief of Grey Magazine, reached out to me while Tali was painting her portrait one day. She heard about the work I was doing and a week later she called me into her office and was like, “Do you think you could begin a project about street kids that we could do like a journalistic story and make it really great and put it in a women’s high ­fashion magazine?”

I was blown away and I told her, “Of course I can do that!” The entire concept of the story was, from the street to the studio. After we shot the editorial, Diesel heard about what we were doing. I pitched this story to them along with the team at Grey Magazine, and Diesel came back a week later with a full budget and a plan to reshoot it in their clothes, sponsored by them, with events and wild postings throughout the city. It really raised the awareness to a whole other level that we couldn’t ever have imagined. But Tali and I did the casting process entirely together. We basically just hit the street for the entire summer, from C­Squat to soup kitchens to shelters. We really dug deep, we got dirty.

Tali: There is such a high level of homelessness here in the East Village at young ages— you can’t ignore it. When we got to know all of them, they feel like neighbors and it’s nice to feel a sense of community. And I think it’s reciprocal, because I’m sure in their eyes, it’s them against the world and the world against them, and so it’s really great to blend those lines. 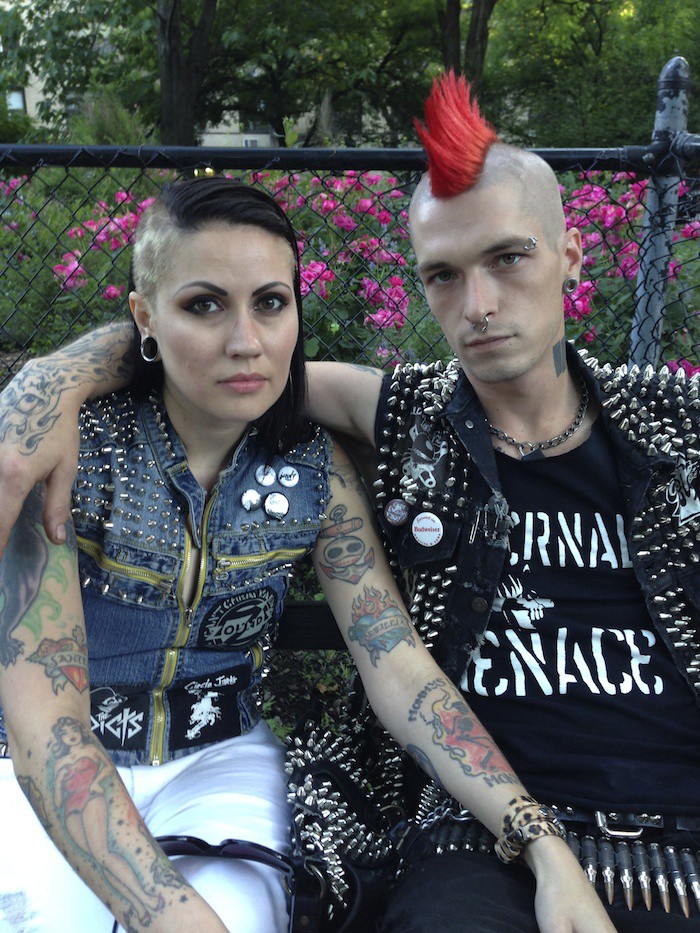 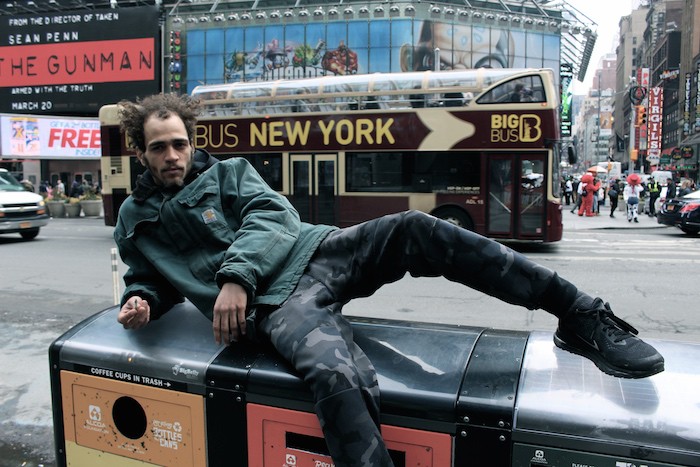 Ian: When you read the story in Grey Magazine, you notice that we’re not telling you the story. It’s done through a personal narrative of these youths telling you what it’s really like. We realized the importance that this has on ordinary people, the fact that they’re telling their stories and people can relate to this. We were given the opportunity to put it in print, in black and white, and empower the lives of certain individuals that we felt needed to be heard, because there’s something there. With our backgrounds and experience, I think about giving back to the community. You can make all the money in the world, but if you’re not giving back, sometimes at the end of the day, you feel empty. 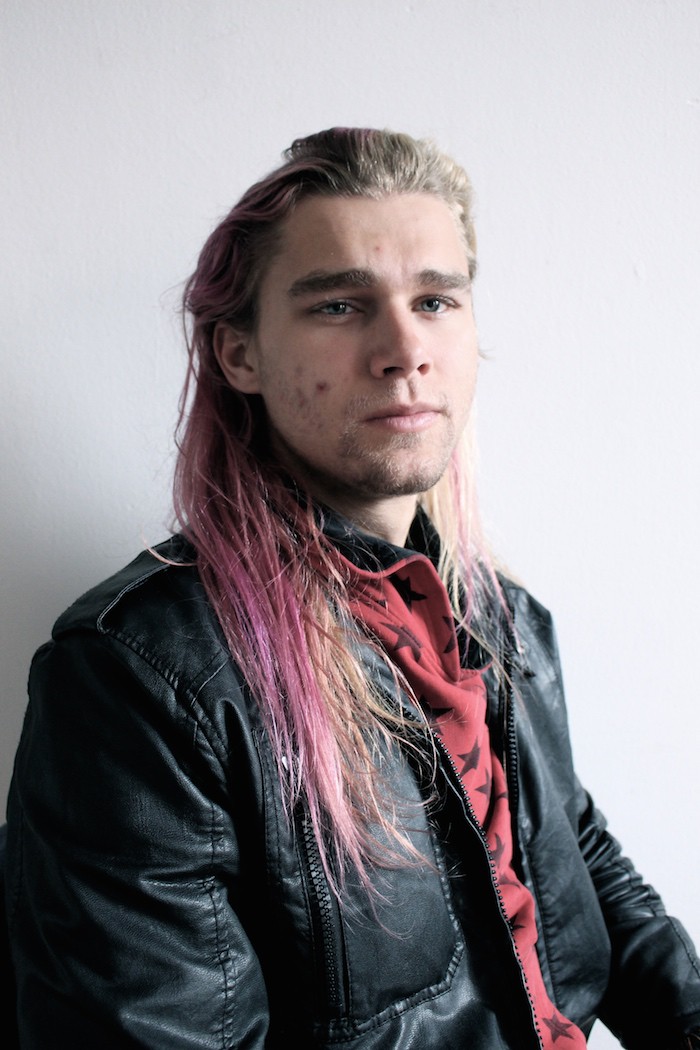 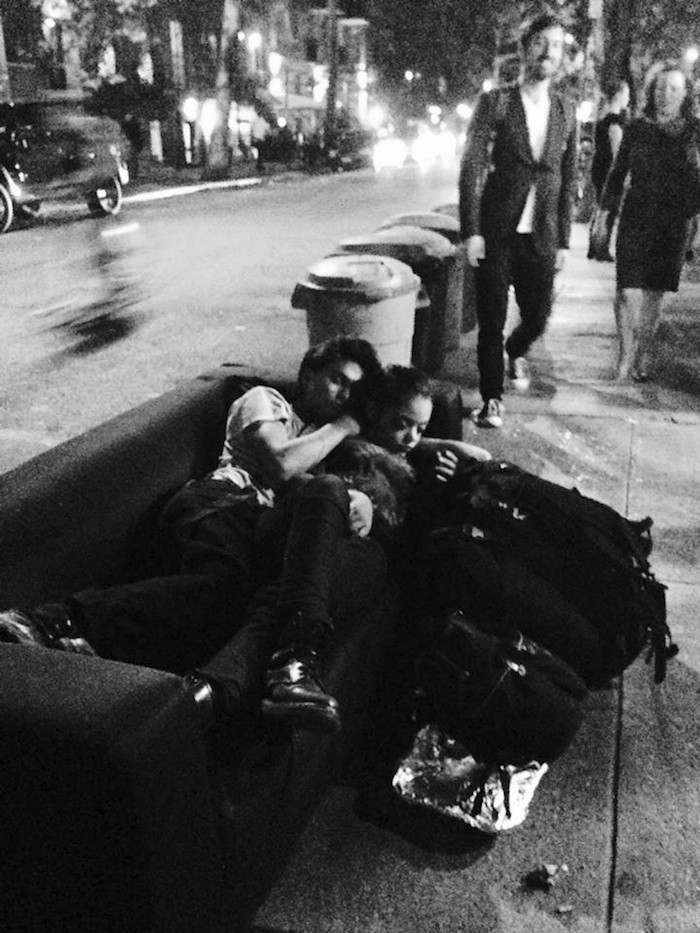 Can you tell me about the casting process? What did you look for in your subjects?

Ian: We met twenty kids a day, sometimes thirty, forty. Some of them were a little defensive. You have to be very psychological when you’re approaching someone to take their picture, because for a lot of people—especially abused characters like we’ve been dealing with—they’re used to being taken advantage of. Sometimes when you want to take a person’s picture, they’re like, “Well, what do you want to take my picture for?” I had to explain the process. I brought the magazine around. I explained what we were trying to do and everything. There was a point when we just knew the ones when we found them.

We were like, “We have to have this one,” so we really just tried to let them trust us enough. It’s rough out there. It was a long process, and the fact that we put it all together the way we did is a miracle to me still to this day. It’s been a really emotional ride getting to know a lot of these kids and wishing I could do more, but I don’t know what to do.

That’s why we’re excited to see where it can go, because we really enjoy it. I’m beginning to notice more and more that that’s seriously the purpose of life sometimes. You got to pay the rent, do that sort of thing, but you have to ask yourself, “How am I fulfilling a purpose? What’s next?” So we use this as an outlet.

Ian, how did you get started in photography? How did your previous work help you prepare for this project?

Ian: My stepfather is a photographer and I was always hanging around his studio growing up. When I came to New York after university, I started taking a lot of pictures on disposable cameras and I noticed that I liked the way they looked. They were interesting —some were kind of dark and had depth. I’ve had cameras over the years and I was always taking pictures, purely as a hobby, of probably a lot of whacked­out characters around the city, because the city is vibrant that way. Then the past four years I’ve been doing it on a consistent basis just to start something I enjoyed doing.

Tali: It takes a certain person to be capable of intense street photography. Ian’s got a very strong spirit and he does not allow negative energy to get him down in any way, so he can be in a really emotionally draining situation and feel fine. You have to be quite fearless. I think it’s just the ability to get your subject, even if it’s someone you haven’t even had a conversation with, to connect with you. You need to be that kind of person, you need to be approachable, which modeling definitely teaches you. You’re constantly working with new people—you have to be easy, you have to be outgoing, you have to connect with people, you have to connect to the camera. 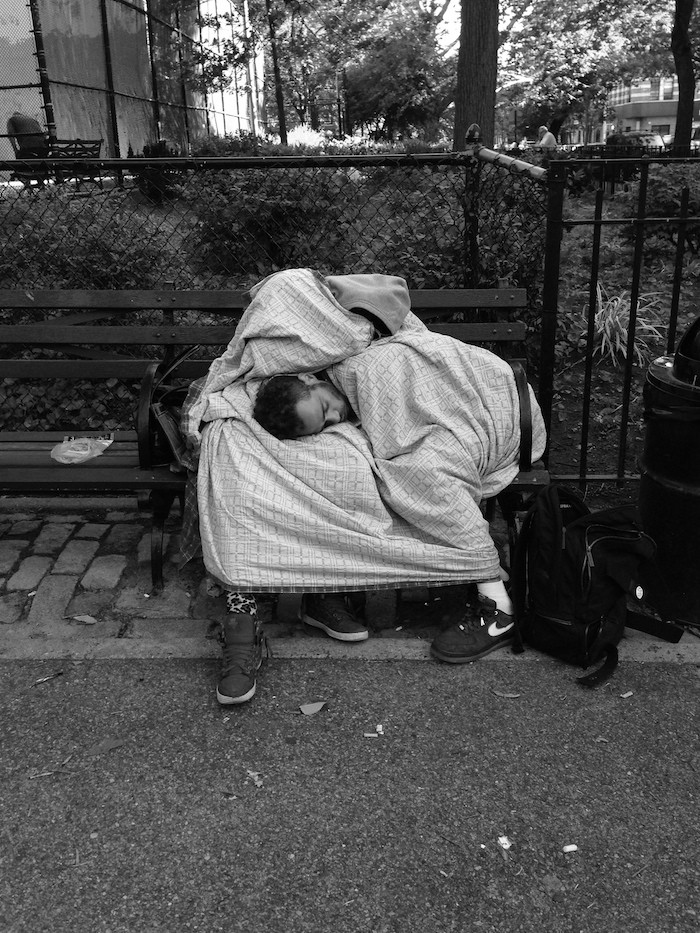 Tali, how did you get started in painting? Have you always been drawn to portraiture?

Tali: I’ve always done art since I was a child, but it’s really been in the last couple of years since moving to New York that I just needed to get more of that passion out. I needed balance—it’s a headspace thing. I’ve just been painting in oils for the past two years and it’s been building and I’ve become more comfortable in my style of painting. I’m self taught, and I’ve had a certain eye for people I like to paint. The more you do it, the more freedom you have within it. Then booking my exhibition at the Catherine Ahnell Gallery (more info here) has been great because I can take it up a notch and take it to a real professional level. It’s a nice feeling to say, “Once I have my show, I can call myself an artist now.” Yes, I have always been drawn to portraiture. It’s ironic in a way, because in modeling, you’re just used to people looking at your face, and in portraiture it’s all about completely taking in another person and completely focusing on them. I like my paintings not only to be a portrait, but to be the essence of that person, and I like the intense human connection of viewer and subject when you look at a portrait. It’s intimate, it’s uncomfortable sometimes, and with my paintings I like it to be a mix. I want it to be aesthetically quite beautiful, but at the some time I want it to be rough and I want it to be vivid and intense and dark and light at the same time, because that’s human. 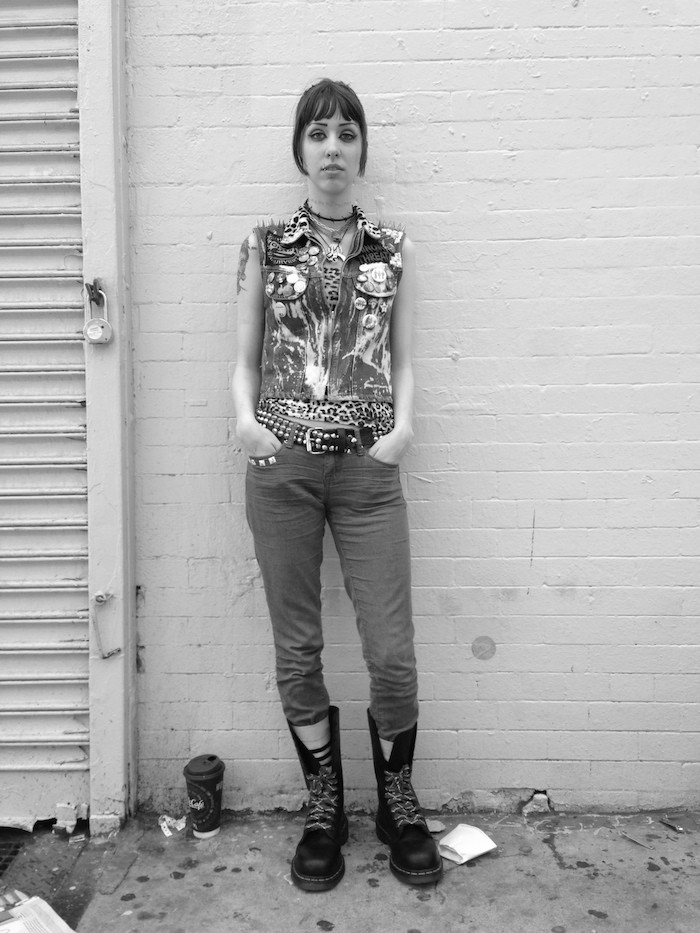 What effect do you hope this project has on the subjects?

Tali: I think it’s giving people a sense of self value and a sense of feeling like they’re good enough. If you’re doing things that are self destructive, that’s because you don’t value yourself, so it’s about giving them a little bit of attention and having people telling them, “Actually, you are inspiring, you do have something that other people like about you, you can be on a poster all around the city.” It’s definitely about giving them a sense of self worth and empowerment.

What effect do you hope this project has on viewers?

Ian: I really want to shock people. I think that that’s where photography is headed in a sense that it should raise the level of awareness and have some wit to it. If you’re just looking at the images, you’re thinking to yourself, “These are beautiful, gorgeous models, they are very edgy models.” So here I put a spin on it, and we give you a fashion story, with fashion models, but look in between the lines, because it’s a journalistic story. Once you start reading about these kids, you’re like, “Holy shit, this kid sleeps on a bench, this kid struggles with heroin addiction, this girl is an orphan, this girl has been traveling the globe riding on top of trains,” and you’re like, “Wow, these aren’t models, these are real, gritty, street kids that we live amongst, that we all had the possibility of becoming had we not had that fork in the road.”

Tali: I think it’s just changing people’s perception of what’s beautiful, blurring social lines, blurring social barriers, making people feel a bit more humanity. Just changing stigmas. I’m always fascinated by New York and history and I love looking at old photographs or going to the Tenement Museum and learning about different social walks of life back in the day. We wouldn’t have that if someone wasn’t there to capture it. We wouldn’t have that if someone wasn’t there documenting it, so in a way it’s about doing that in a modern way, because no one else is capturing that right now and we’re constantly inspired by it. I walk home to my apartment and I see five men sleeping on my block, but no one’s capturing it, and I’m so fascinated by how it was back then, so you can only hope that in the future people will have the same fascination with what we’re doing. It’s an education, it’s giving social awareness. I’ve heard there’s more homelessness in New York now than there was in the Eighties. No one’s really talking about it that much. Everyone seems to ignore to it.

Ian, you’ve been a tireless promoter of this project to try to get the message out there and raising awareness of the topic. How does it feel to be working with MTV now?

Ian: I have selected two subjects and have been documenting them for the past 3 months, I am proud to say that we have solidified employment for the subjects and our only goal is to give them opportunity to get themselves out of homelessness. I’m very excited that The Fat Radish, MTV & #StreetKidsProject are coming to a TV near you this August! 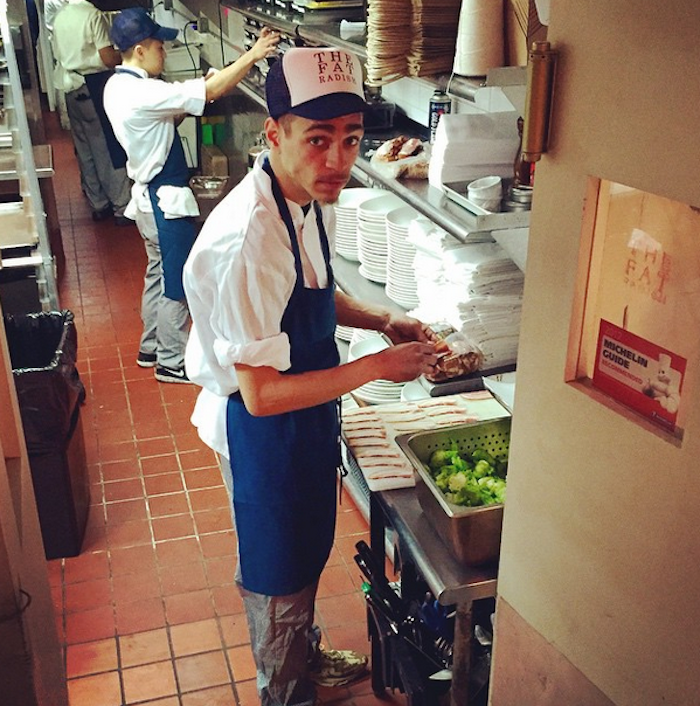 #StreetKidsProject star William starts his first day at The Fat Radish, MTV collaboration on our upcoming documentary about street kids in NYC