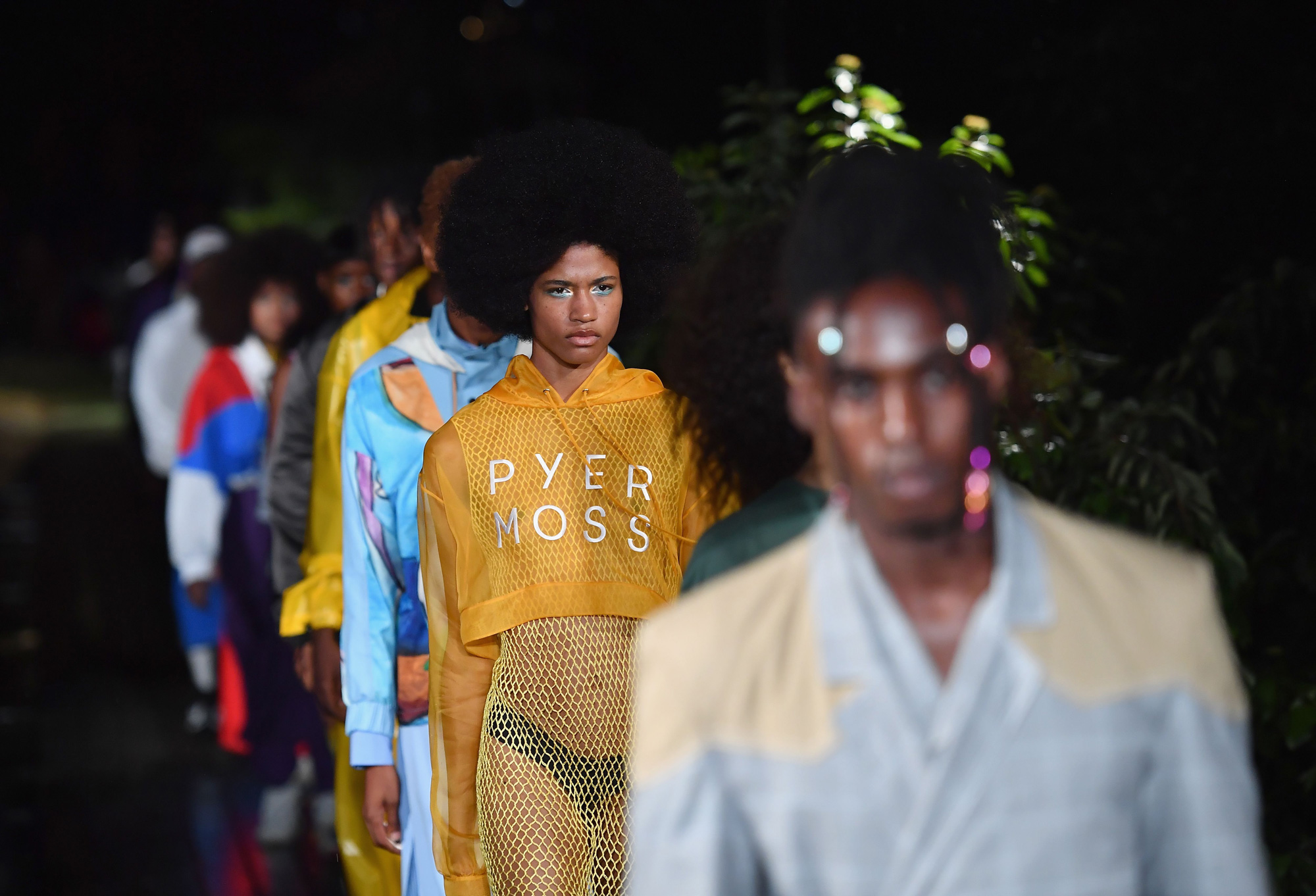 Blackness and the nuanced forms of anti-blackness have been threaded throughout news stories with question as to when, and how, it will all come to a fever pitch. Whether it’s the normalization of the Ku Klux Klan on America’s city streets or the calling of police on black citizens for insignificant offenses or the wave of xenophobia abroad, it has been a daunting task to navigate the space of the living as the “post-racial” narrative dissipates (if it ever existed at all).

Kerby Jean-Raymond and his five-year-old brand Pyer Moss set to address the current cultural climate this past Saturday hosting his show at Weeksville Heritage Center in Brooklyn. The significance of the location, a neighborhood founded by African American freedmen, with buildings that pre-date the Civil War, paired harmoniously with his collection that aimed to celebrate and unapologetically promote the black experience. Titling his Spring 2019 show “American, Also: Lesson 2,” his models marched to the sounds of a 40-person black choir singing songs from Stevie Wonder, Aretha Franklin, Roberta Flack and Donny Hathaway – a nod to both the talented souls singers of yesteryear and the spiritual cornerstone of the American black experience, that was strangely fitting as the audience was baptized by the steady flow of rain.

Shirt available on pyermoss.com now — “…his isn’t streetwear but clothes about life at street level and the humanity of everyday people that is both universal and specific.” -Robin Givhan, The Washington Post

With shirts powerfully emblazoned with “Stop Calling 911 On The Culture” (on sale today) and “See Us Now?”, Jean-Raymond seemed to be poking at the antagonism and also consumption of the black experience and fashion’s late, yet necessary acknowledgment of its lack of diversity. He continued his popular partnership with Reebok and introduced a collaboration with FUBU, the ultimate OG 90s streetwear line that took the task of creating something “for us by us”. His most noteworthy collaboration, however, was with artist Derrick Adams, on 10 touching looks that incorporated black people doing ordinary things whether embracing a newborn or children serving as the flower girl and ring bearer.

The casting was an ode to the power of the internet – but only if you were privy to viral black culture. Model activist Ebonee Davis opened with boy in hand, wearing a gown that much resembled the robes of the choir serenading the crowd while Sira Kante dazzled in a closing look, adorned with Swarovski crystals. Rapper Sheck Wes, of “Mo Bamba” fame, walked in a flush pink suit as viral star Samriah Raheem continued her first fashion week in a Reebok look with cross colored references. In between models like Kadija Diawara, Abdulaye Niang, Sasha Colin, Khorey Mcdonald, Ange-Marie Moutambou, and Aweng Chuol showcased the assorted faces of black identity in modeling today. A perfect storm, indeed. See what the models are wearing off-duty during NYFW S/S 19! Pt.1
NEXT A return, roses, rain and euphoria at Rodarte S/S 19