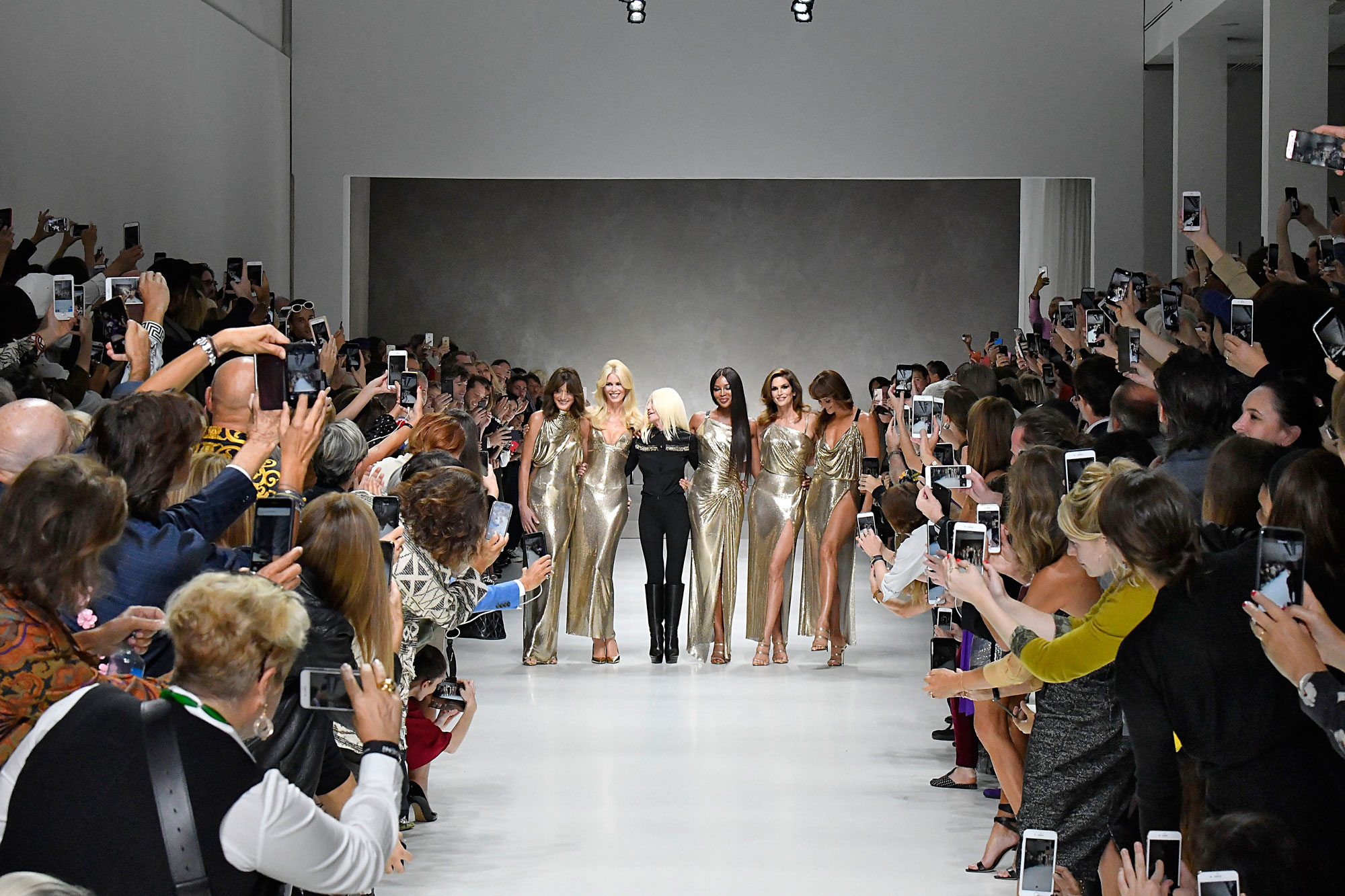 2017 was a shapeshifting doozy of a year between politics, identity, consequence and convention. At times it was difficult to keep up. In response, existential changes unfolded within the industry before our eyes one after another–and fashion is stubborn! Some were much needed, others more divisive, and some are still happening. Among the sundry of events that shook the delicate high fashion ecosystem, these 10 are the ones that had the highest impact or were the most significant.

Gurls Talk Is….Massive thanks to @eveningstandardmagazine for giving @gurlstalk this wonderful platform to promote our one day GURLS TALK X COACH festival that's happening tomorrow (1st of July) @180thestore . Can't even put into words how excited I am to see you all tomorrow. @coach @dazed #coachgurls


Models changing the world
Normally years blow by but 2017 felt like it lasted forever. Whether it was on the positive or negative swing, what was one of the strongest elements was the inclination to stand for something positive. That certainly included models like Adwoa Aboah, Cameron Russell, and Karlie Kloss who used their privilege and platform this year in order to change the world for the better. Forbes’ 30 Under 30 list newest addition, Kloss created KODE WITH KLOSSY which stands to empower girls to learn to code and become leaders in the male dominated tech industry. Based on her own curiosity about coding, the supermodel built her educational nonprofit as a means to provide hands-on STEM education to over 500 young women. Aboah was the ultimate rise of the phoenix as the British model had her most successful year to date gracing the covers of i-D, Vogue, and Love Magazine. The advocate still managed to give time as the founder of Gurls Talk, an online community she created with best friend Holly Gore that is dedicated to helping girls tackle issues like mental health, addiction, body image and sexuality. The non-profit partnered with Coach 1961 and Dazed Magazine for its first free festival this past summer full of panels with Hanne Gaby Odiele, a dance workshop and mental health seminar for the ultimate day of self-care. Finally, while Cameron Russell has been in the spotlight as of late for taking a stand against the rampant sexual abuse models in the industry have endured (more on that later) she also has been linked with the sustainability group, Model Activist to help fight against climate change. Since its inception a year ago, the alliance has raised almost $20,000 to support activists on the front lines at Standing Rock and in Houston.

THE FIRST PRE-FALL: Artistic director @clarewaightkeller presents the Givenchy Fall 2018 Pre-collection for women and men shot at a private manor in Kent, England. Urban influences and Couture sensibility make this collection a testimony to the new Givenchy attitude. #GivenchyFall18 Photographed by Theo Sion

New Eras at some of Fashion’s Most Storied Brands
Several major fashion houses were handed over to new design teams in 2017. Anxious anticipation and hype heralded the new era at Calvin Klein, where Raf Simons brought a new kind of (very Belgian) minimalism to NY. Paul Surridge’s fresh eye was an unexpected twist at Roberto Cavalli while Olivier Lapidus came with entrenched fashion history upon his arrival at Lanvin. Natacha Ramsay-Levi was a surprise – but very on-brand – appointment to Chloe, and Claire Waight Keller delivered a new kind of serious sensuality to Givenchy. Going into 2018, this new guard will be looking to put their own stamp on long established tradition.

Calling Out the Problems of the Industry via Social Media
Before the #MeToo movement arrived in the latter half of 2017, fashion was already caught up in furor. Social media became the vehicle to voice outrage and discontent. Casting director James Scully took to Instagram in February to call out racism and model mistreatment, making the bold move of naming names – and an avalanche of callouts followed. Fashion fans on Twitter expressed outrage at Gucci’s unattributed referencing of Harlem designer Dapper Dan. Model Ulrikke Hoyer took to Facebook to detail a difficult casting experience at the hands of a major fashion brand. Diet Prada became known as the Wikileaks of fashion, and Cameron Russell gave a voice to dozens of models and industry professionals who have experienced sexual harassment in the workplace. Does this new movement of transparency mean that fashion’s ugly underbelly is a thing of the past?

Fashion’s in Love with the Offspring of Famous Models, Actors and Entertainers
It’s always helped to have contacts in the business, especially if those contacts have extraordinarily beautiful genes. The Class of 2017 had superlative connections though. Adwoa Aboah, daughter of Camilla Lowther (agent to some of the industry’s biggest creative names) was everywhere. Kaia Gerber, baby supermodel and supermodel’s baby, had a sensational debut show season but wasn’t the only legendary model’s offspring out there. Aidan Curtiss (daughter of Katoucha), Roberto Rossellini (son of Isabella), Elfie Reigate (daughter of Rosemary Ferguson), Mingus Reedus (son of Helena Christensen), and Parker van Noord (son of Andre) all had very notable appearances. Dolce & Gabbana kicked up their casting cavalry of famous progeny and siblings, with their campaign and show lists reading like the yearbook at Beverly Hills High – Stallone, Day Lewis, Baldwin, Law, Fiennes, Hurley, Gerber, Lee and Huntington-Whiteley surnames all on the roll call. And don’t think Europe was immune to a little famous family appreciation, with Brit pop royalty Lennon Gallagher (son of Liam) walking for Saint Laurent, and French film force Sonia Ben Ammar (daughter of Tarak) working for Miu Miu.

Shifting Editor in Chiefs
A string of high profile editor departures and replacements at magazines threw the year a curve ball as print acclimates to its increasingly uncertain future. If Teen Vogue going digital only, along with Condé Nast making blanket cuts and frequency decreases in the number of issues, plus Nylon shuttering its printed magazine, are in any way a presage of things to come, a change of guards may be a shot in the arm. At Condé the biggest news was Edward Enninful replacing Alexandra Shulman as editor-in-chief of British Vogue who maintained her title for 25 years. Though not filling Enninful’s role, Katie Grand came on as contributing fashion creative director at W Magazine. At Vogue Italia the late Franca Sozzani was succeeded by Emanuele Farneti in January. At Teen Vogue Elaine Welteroth took over Amy Astley’s EIC position, shaping it into a go-to for liberal and feminist reporting in fashion. Welteroth will maintain a role after news of its print division closing. At GQ, Will Welch replaced Jim Moore. Cindi Leive resigned from her editor-in-chief position at Glamour Magazine after 16 years without a replacement named yet. Lastly, at Hearst, Marie Claire’s Nina Garcia replaced Robbie Meyers at Elle. Phew!

The Year of Rihanna
Trending 101–Be Rihanna. The reverential pop star was fashion’s much needed tonic to a year smudged by collective woe. Never mind that she didn’t even release any music, Badgirlriri could be a unit of multi-hyphenate measurement, 10 being herself (does that make Virgil Abloh a 9?). Her 2017 magnum opus was Ri’s Fenty Beauty, which blew the woke doors wide open. 40 different inclusive shades of foundation and a campaign featuring a diverse cast of 15 models like Paloma Elsesser, Halima Aden, Leomie Anderson, Huan Zhou, Slick Woods, Maeve Whalen and more, proved beauty brands CAN do much, much better. Let’s not forget her motocross-charged, supermodel walking Fenty x Puma fashion show. Even if you somehow weren’t in the know, you couldn’t miss her on the newsstands with 9 covers throughout the year: Vogue Paris, Dazed, Vogue Arabia, Elle in the multiples, Harper’s Bazaar and Paper. No perfect year would be complete without a Humanitarian of the Year award from the Harvard Foundation and a prominent role as a shape-shifting alien in Luc Besson’s sci-fi film Valerian.

The Rise and Rise of Female Photographers
2017 was, without a doubt, the most pivotal year for female photographers to date. Their lenses more than ever influenced editorials, campaigns and the discussion at large, helping tilt the market closer to gender equity behind the lens. More established stars like Cass Bird, Harley Weir, Charlotte Wales, Petra Collins were met by rising talent like Amanda Carchian, Talia Chetrit, Carin Backoff, Sandy Kim, Bibi Borthwick and Hanna Moon respectively defining the female gaze (This is not a definitive list due to brevity). They join trailblazers like Leibovitz, Moon, Unwerth, Minter, van Lamsweerde and Schorr to create a sum that is greater than its parts. Though their visual language is diverse, their quantity is evidence of an improving underpinning for the years to come.

The New York Exodus…or Influx?
2017 was the year of the mass exodus as many dominating designers like Proenza Schouler, Altuzarra, Rodarte, and Thom Browne left the comfort of the familiar in New York City for Paris, the City of Lights. Those empty slots left room for buzzy brands to have grand showings like Rihanna’s Fenty x Puma and Shayne Oliver’s Helmut Lang. Recognizable names like Raf Simons and Tom Ford took over key fashion week slots for both the men and women’s shows respectively and with the new year it seems the trend will continue, as new players join the game like Milanese brand Bottega Veneta showing in New York for the first time.

Moments before the iconic finale of the #VersaceSS18 show with Gianni’s muses. #VersaceTribute

The Supermodel Resurgence
With the Dries show in March, the Helmut show this past September, and the ultimate Versace finale and campaign to match, there has been a nostalgic mood of houses looking back at their key muses. Castings read like epic rosters taken straight from models.com’s own Icons, New Supers, and Legend rankings – names like Alek Wek, Kirsten Owen, Amber Valetta, Erin O’Connor, Nadja Auermann, Natalia Vodianova; and of course the supermodels who need no attached surname – Christy, Naomi, Cindy, Kate, Gisele, Claudia, and Helena were all seen from catwalks to covers to billboards-a-plenty.

The Unisex Runway Offerings
In what could be seen as a need for complementary cohesiveness or just an economically friendly alternative, major brands decided this year the more the merrier when it came to traditional forms of runway presentations. And what better way to figure out what to borrow from the boys (and vice versa) than hosting both men’s and women’s shows for the new season? Luxury houses like Kenzo, Givenchy, and Saint Laurent followed 2016 frontrunners Gucci, Vetements, Burberry, and Calvin Klein to show both men and women collections together. Just earlier this month J.W.Anderson, Balenciaga and Salvatore Ferragamo both reported that they would be follow suit with efficient collections in the new year. Meet the photographer all the British it-mags already approve of