The latest insta-girls have been clamoring over this design team and their Kendall Jenner and Gigi Hadid approved line of luxe streetwear, restructured basics, and leather lace ups. Launched in 2015, Ben Taverniti & makeup-artist/business partner Joyce Bonelli are behind the gender neutral Unravel Project brand that has provided models, celebs, and the jet set elite with the perfect wardrobe for their off-duty ventures. Picked up by the leading retail stores in the World, the collection has risen to noteworthy acclaim in what many would consider a short amount of time but their success is far from a viral sensation. The duo spoke to Models.com about their evolving label, being their own muses, and using social media to destroy the fashion system.

Talk about your beginnings. Did you pursue fashion to follow in your father’s footsteps, Ben, or were you always drawn to it?

Ben Taverniti – Well, I started because my dad is a designer. I grew up in my dad’s studio and our home was surrounded by that. It really was my path from day 1 and it was completely organic. I started working when I was 17 years old. I went to fashion school, worked on a lot of projects and created for a big denim brand. I realized that what happened is the business took over and everything is lead by commercialism and trends. Really I felt like everything was so stale and it was becoming really boring out there. That’s not what I started designing for so it was very important to create something where there was no compromises at all. That’s how Unravel was born – No trends, no genders, no seasons. The price is the price of whatever we do and however we do it.

What is it about disturbing the fashion peace/piece that does it for you? Why did you first focus on destroying, if not slightly, the pieces in your collection and where did the idea come from?

Ben Taverniti -I fell into that thing of business taking over and having to compromise and was like, no way! Everything was the same. If you go to a store today, especially in a department store, they have different levels and different categories of brands, right? You go to a designer floor and the designer floor has all of the things you can wear once because it’s so trendy. Then you go to the contemporary floor and it’s kind of a knockoff of what you had seen on the other floor. We live in a world that is so familiar and it’s so important that you see what’s happening in real time. You can’t hide anything anymore. I really wanted to destroy the business side of things.

Overall, it’s something that is very close to my heart and I always go back to that. When I was a kid I got into fashion school, that’s when Rick Owens, Margiela, and Helmut Lang. I’ve saw those guys and thought, this is what I want to do. It’s not about the brand or about clothing, it’s about way deeper things than that and today when you look at it it’s a complete heritage of those brand. Literally, I make a joke out of it, but if anyone has an Instagram handle with some followers, they start creating and start being a designer! So I’m thinking what does that say to kids? They are stacking too many brands out there that have a following with t-shirts and prints and what does that show? What’s going to happen in twenty years? I really wanted to put dynamite in the wall and be like, “No! This is how it happens.”

Take us behind your design process and introducing new pieces into your collection. Are there any design elements that are evolving?

Ben Taverniti -You know, I always say the same thing about Unravel. When I started Unravel I just wanted to create the 13:72 new closet of things, right? It’s very simple at the end of the day. It’s strange because people cannot pinpoint what Unravel is, but a essentials of the closet. T-shirts, jeans, bombers, whatever, you know? **laughs** That’s really what we do. The first season we were basically creating putting a twist on that but still being timeless and really effortless. Two years later, we’re in an amazing position where today we’re recreating our own closets for Unravel so, this season specifically was taking all of our basics, and again when I say basics for Unravel a lot of people can argue that because it’s not everybody’s basic, right? But at the end of the day it’s really mixing stuff. I love playing with volumes and creating new volumes. Taking that’s our denim jacket and our biker jacket and putting them together. By that we have this very, this process on the washing as well. So now we are mixing texture, by mixing those two pieces we’re creating new volumes and then on top of that washing it which becomes a complete – like – it’s like a cooking class, you know? I always say like, I’m a mad scientist. People see me when I’m in that closet would think I’m completely crazy because I take all of the old pieces and I put them upside-down, inside-out, I cut out the lining, I sew them together, I put them on mannequins, I put them on girls, I put it on boys. It’s that whole process and we’re getting to that point where it’s incredible, to me the most luxury thing that I could get in my career is to be able to play with my own things. And be able to create new pieces and evolve the collection from that, it’s incredible. What’s even more amazing is that this collection is already myself, the one that people are talking about so it’s like, wow we are creating the most talked collection as far as Unravel is concerned right now without a closet. Because I’m excited. It’s a really amazing thing. 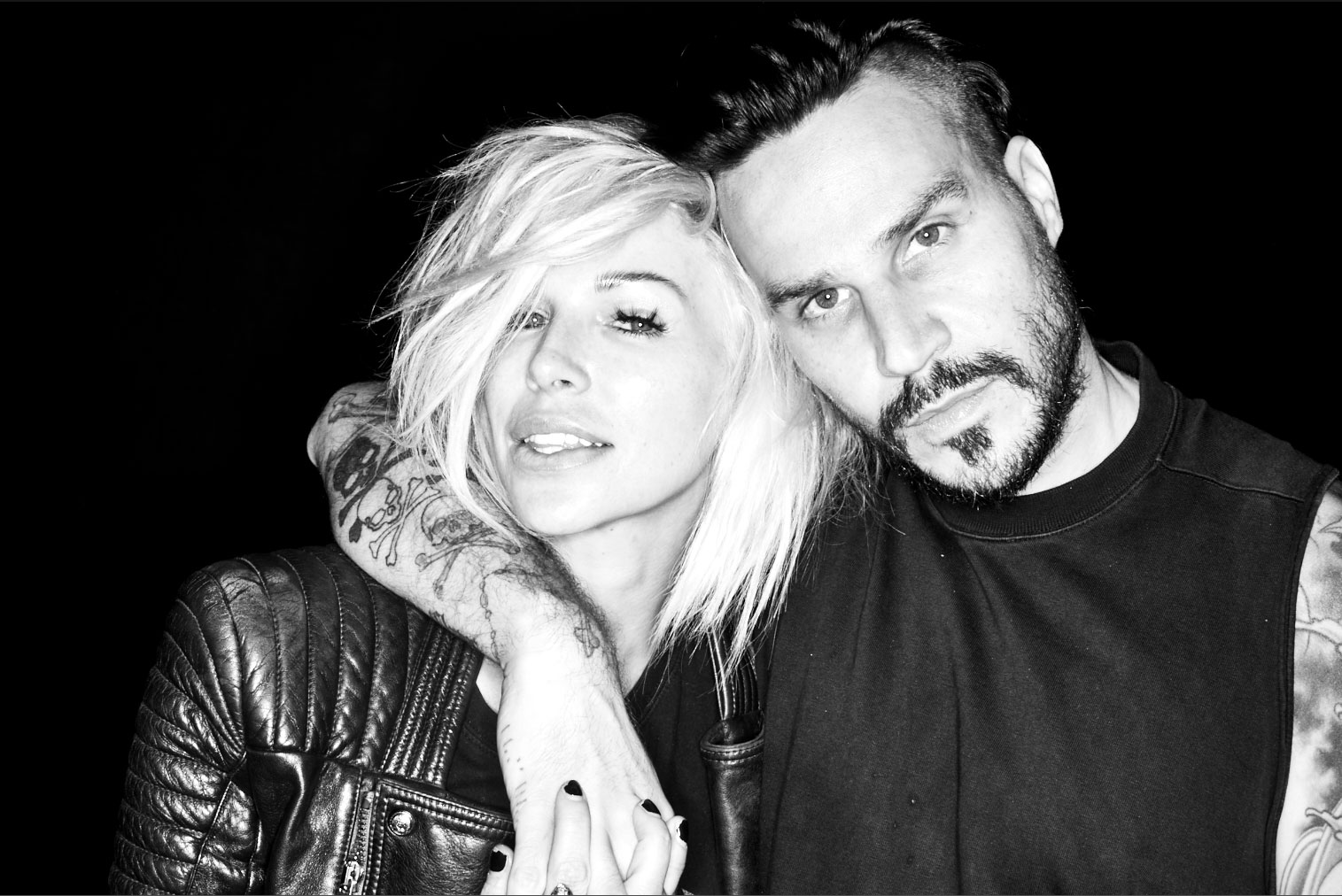 What do you look for in a muse – model or otherwise? Who kind of represents the Unravel guy or girl?

Ben Taverniti – You know I always say that we’re extremely selfish. We’re not looking at anybody outside our home. When I design a collection, the men’s line is for me and if there’s one piece that I don’t want to wear, I don’t put it out there because there’s no point. The same thing for the women’s. And on top of that, Unravel is extremely androgynous so I steal things from women’s and from men’s, I completely mix it. This collection is made for Joyce and I and when we had the twins we actually took all of our favorite pieces from men’s and women’s and did them in toddlers version! It’s the most crazy bomber for kids you can have because it’s probably going to cost a thousand dollars but it’s a dope jacket I can guarantee you that! It’s a cute family culture. It’s our version of it. That’s what Unravel is. Like I said, it’s not about trends, it’s not about fashion, it’s people actually buying and getting into the tribe and that’s the most important to us.

It’s no secret that you guys have used social media to your benefit. As far as fashion’s general relationship with social media, many have said that it has added to their anxiety in the ever driving need to provide content. How do you guys made sure you’re able to use social media as a positive to put your brand out there versus letting it control you?

Ben Taverniti – This is where we have the balance, right? Social media is a constant struggle. It’s very important, and we’ve been skyrocketing because the power of it is incredible but we have to be very careful with it as well. We are not thirsty for attention and it truly happened organically because of Joyce. 90% of what we do and what we have we don’t communicate about.

Joyce Bonelli – Social media comes easy as far as the content. People lately have been like, “Wow! How many people are on your team?” And I’m like, excuse me? We don’t have anyone! I don’t have people trying to get me more followers. We’re just showing what we do and who we are and we’re definitely speaking our own language that people are interested in. It’s what we do every day. Our studio in LA is in our home.

Ben – Also, Unravel started in a very different way. Unravel did not start because of the celebrity and that was something that was very important to us. At least as a brand, I only wanted doors in the best stores of the world. People were telling me that was crazy because those stores are so hard to get, even one of them. But we got them all. That was the incubator. It all comes together because people see you’re in the best stores and we are traveling all the time. Our customer also has that lifestyle, so when they go to Barneys in Beverly Hills and then they go to New York to check out Jeffrey and then to Paris for Montaigne Market and (London’s) Selfridges and they see Unravel, Unravel, Unravel that creates the conversation right there. On top of that, you have all of those people wearing our clothes who are our friends and support us. It’s not like we’re pushing and selling boxes of stuff to celebrities and then it becomes viral. It’s the perfect combination of all of that contributes to our social media.

Amazing! As you guys have evolved to this almost two year mark, what are your plans for expansion? What do you see as the next steps as you continue to evolve?

Ben Taverniti – Without going too much into it because our dreams are so big that people will think we are out of our minds! I keep referencing people from the late 90’s that live in their own world and to me the biggest goal is for us to live in our own world. We do whatever we want, however we want it, and share that with people. The same way that we want to share our closet, there’s a lot of things we want to share. Creating a tribe is everything to us, because then everybody buys into it. Who are the 15 British Fashion Council NEWGEN Recipients
NEXT