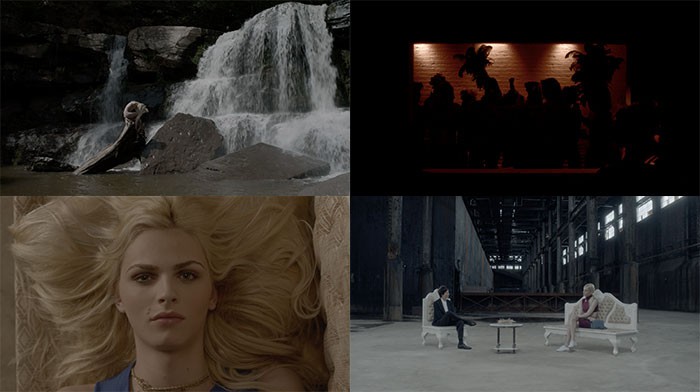 “Reason” is a passion project from New York based stylist Marcela Jacobina 4 years in the making. The film, directed by Bruno Ilogti, was devised and written by a, then, 20-year-old Marcela, as a way to incorporate philosophizing picked up from her psychoanalyst father. The contemplative short stars Andreja Pejic who does some existential soul searching throughout the free-form narrative guided by a therapist played by co-star Anna Mouglalis. Cinematographer Pedro Gómez Millán beautifully shot the dreamlike visuals that are accompanied by an original soundtrack from Grammy nominated producer Ben Bronfman. Marcela and Bruno provided Models.com with extra insight on the film exclusively premiering on Models.com.

Watch the full film below

What was the original inspiration for the short film?

MARCELA and BRUNO: Andreja was one of the big starting points for the film. We find it very inspiring that she aesthetically represents the idea of change and reinvention. She is a rule breaker. When we decided to explore this video format that is neither a fashion film, neither a short movie, and write a proper script with dialogue and etc, it became very clear that this was all about mixing opposites.

We see “Reason” as a fashion film that discusses the depth of superficiality. We wanted the main character to be a model played by a model, because we think in our society they are the perfect representation of the superficial. We see them in magazines and billboards and think they are as 2 dimensional as the surfaces they inhabit. I meet so many models who are embarrassed by their profession because they have been told what they are doing is not important or relevant. Being unhappy while living by someone else’s rules is something we call all identify with. We think fashion, beauty and art can be very deep, inspirational and even life saving.

The Picture of Dorian Grey by Oscar Wilde was a big inspiration for the script. Also the works of the Austrian philosopher Ludwig Wittgenstein. Wittgenstein said that the meaning of words, symbols and concepts are not in themselves, but in what we associate with them.

What did you wish to explore, considering the esoteric dialogue?

MARCELA: My father is a psychoanalyst and consulted on the script. I had somewhat of an undiagnosed depression during my late teens and the dialogues in the short are, in a way, a collection of the ideas my dad and I discussed during that period. Those conversations completely changed the way I saw things. I started writing the script shortly after that period.

How did you go about putting together the team?

MARCELA and BRUNO: We have been friends for about 6 years now and came up with the project together. We met Andreja while still living in Rio and invited her to be a part of the short. When we moved to NYC in 2012, we started looking for funding and then working on pre-production. Jen Gatien, our producer, was a big part of how the team came about. She brought in Anna Mouglalis and our amazing, incredible director of photography Pedro Gómez Millán. Anna is the coolest girl we’ve have ever met. She is an amazing actress and completly understood what the project was about. She was so easy to work with and a joy to be around. We are huge fans.

On the other hand, Ben Bronfman, who scored and co-executive produced the film, brought in Theophilus London and Jessica Stam. Andreja brought in Nabil Harlow, our hairstylist.

Was Andreja always thought of to be the leading role? How did that come about?

MARCELA and BRUNO: Yes, absolutely. We met Andreja at a party in Rio. I think that was in 2011. The 3 of us became friends and kept in touch. She was one of the big inspirations for the film.

How was the process of filming, did all go smoothly?

BRUNO: Everything we had in this short was very atypical – from crew, locations to cast. We had about 6 days of filming and a week of rehearsing with Andreja, which for a short film was a lot. When we started filming everything was pretty set up. The hardest part was to manage all locations in a short time, especially with short money, big crew and no authorization to film outdoors.

Anything/ anyone contemporary that is inspiring to you?

MARCELA: My favorite director is Terrence Mallik. His film “The Tree of Life” is the best thing I’ve ever seen onscreen and completely changed the way I think of cinema and movie making. He is a visual storyteller. I also love Tilda Swinton. She is the artist and woman I want to be.

BRUNO: Thinking about another 26-year-old, I just have no words for Xavier Dolan. He is an amazing director and editor, his relationship with music and image speak directly to me.

BRUNO: “Seventh seal”, “I killed my mother”, “The Lion King”