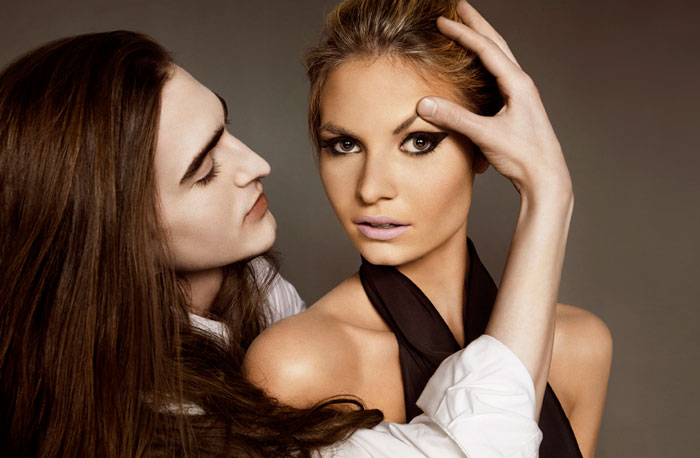 As one of the business’ rising stars Edward Bess is at the forefront of what’s chic in beauty. With high profile fans like Oprah Winfrey, Jennifer Aniston and Grace Jones use his eponymous line to create their signature looks, as do countless regular women for whom products like the Ultra Slick Lipstick and Compact Rogue have become staples. We catch up with the model turned makeup artist and mogul to discover his philosophy on beauty, what it’s like to work with legends and which essentials every girl ought to have in her beauty bag.

Did you grow up wanting to work in beauty?

Edward Bess: I’ve always loved makeup. I grew up in South Carolina, and from an early age as a young boy I would tell my mom and my three sisters what to wear, especially when it came to makeup; ‘don’t do this, don’t do that’ and they listened, funny enough, and so I think that gave me the confidence to think that maybe my vision might just resonate with women everywhere.

Now you used to model, when were you discovered?

EB: I was studying theater, I moved to New York from South Carolina to study theater at The Professional Performing Arts school. I auditioned as a theater major, read a monologue and got in, and my parents were very supportive and let me relocate for that purpose. So there I was studying theater and randomly a filmmaker took black and white photos of me on a rooftop, and those landed in the hands of my agent which led to me modeling. The first gig right off the bat after I signed with Click was a shoot with Scavullo. It was pretty crazy.

Wow, what was it like working with him? Legend.

EB: My phone I think was just off at the time and they were like, ‘You don’t understand…Francesco Scavullo. Learn it. Show up to the studio. Be there.’ It was just amazing. Amazing lighting as you could imagine. He was lovely. It was really a magical time.

That’s an only in New York kind of story.

EB: Only in New York, who would’ve thought it, you know?

So when did you start with the actual line? When did that happen?

EB: I launched in 2006 at Bergdorf Goodman and it was my first collection, Lip Wardrobe. So that was my first foray with lip colors. I chose them really because that was where I noticed most women were wearing the wrong shades of lipstick and figured that was a perfect segue into me sharing my teardown approach to beauty. It was compiling these very edited 10 lipsticks and 5 lip glosses that I got to really establish what I’m all about really- looking like yourself, but better.

Could you tell me a little bit about how you went to create the formula? Because the formula is really incredible, it’s so smooth, so light— it’s really the best out there, so how did you get that perfect mix?

EB: Thank you so much. I guess I have an instinct for what I like. You know, when I see something, I get an inclination to ‘oh make it this way’ or ‘oh make it that way’ when it comes to photography, packaging design, but with the product being key- that is number 1, the most important thing for me. Just knowing that I want not only timeless shades that never go out of style from beige to red but that I wanted them so delectable and so creamy with no glitter and no shimmer; it really was a constant quest going back and forth with the chemists telling them ‘no it’s not creamy enough, no it’s not creamy enough’ until we really arrived at that perfect formula that’s just developed a cult following.

Now you spoke a little about mistakes that you noticed women making can you tell me a little bit about that – what’s your philosophy when it comes to makeup?

EB: It really comes down to wearing less makeup than you think you actually need, so of all people to be saying this it’s funny because it shouldn’t be me- but I’m saying wear less makeup. I guess the most common mistake I see a woman making is wearing too much makeup and perhaps trying to cover and conceal to look like someone else. She really should be highlighting her best features so that she looks like the best possible version of herself.

Absolutely, that’s great advice. I think people definitely need to know to work with what they’ve got.

EB: From supermodels to the everyday woman, those rules apply. Certainly, supermodels don’t always wake up looking like supermodels, I’m sure you know that! That happens with everyday women too. You know, the schoolteacher has to make her best effort. 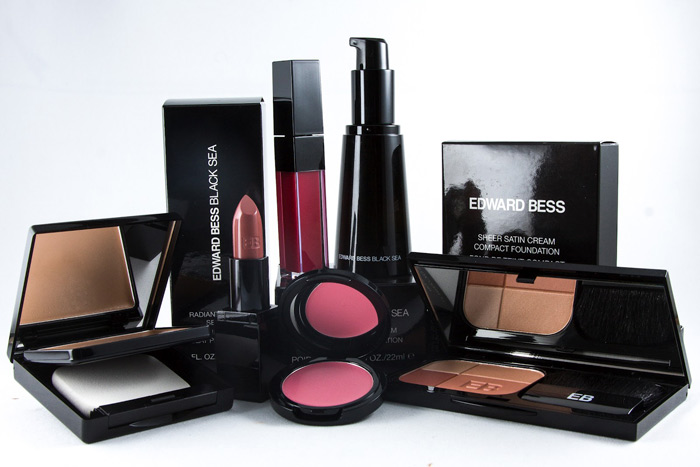 Definitely. Can you tell me a little bit about the other products in the line—the eye shadow is beautiful, the lip gloss, the essentials that every woman should have from your collection…

EB: The lips for sure, that’s the biggest way to my heart for a woman to open her makeup bag and let me see my lip colors in there- I love that. But everything that I’ve done since- eye color, face color, skincare, fragrance, it’s so minimal and so subdued. I’m particularly fond of my Black Sea Hydration Cream because it is all inspired by this remote region along the Black Sea coast. I made a face cream and a serum just for myself and now they’re really popular in the line.

I want to try that that sounds absolutely phenomenal!

EB: I do make a bronze sun kissed look and make really beautiful bronzers. I like to pair the shades with sunlight and afterglow; it’s really nice because anyone can look like they were away all of August. Just swab on some of it!

EB: Yes, Oh La La was my debut fragrance and it was a fragrance that I made first and foremost for actually, Oprah Winfrey. I knew that I was seeing her and I didn’t want to show up empty handed, it was something that I whipped together knowing that she loved gardenia and she was so especially touched that I had done that for her, and I guess she made it one of her favorite things.

I mean, if there’s one person on earth whose endorsement you can get… that’s the one. Now what would you say is next? Because you have this phenomenal line that’s very popular, is there anything that you haven’t done yet in the line?

EB: Recently for me, I’ve just launched on the QVC channel on TV, so that’s been really wonderful being able to reach so many women at one time; it has been a thrill. It’s very exciting to turn that corner and try something new because before, my line was exclusive, not everyone could get their hands on it- it was only sold at Bergdorf’s, Neiman Marcus and select Sephora stores, between NY and LA. Now with QVC, it really makes my product available to women everywhere. A product that’s been really well received is the mood foundation inspired by the success of my Black Sea skin care line. I’ve married the anti aging ingredients of the Black Sea region with my expertise in makeup. The product is really phenomenal.

I heard so much about QVC being a turning point for so many brands, because it introduces you to a whole new audience basically.

EB: Exactly. It can make anyone a household brand.

Are there any products coming out that you really think are necessary?

EB: I’m biased- I love them all; but one in particular is very inspired by the debut collection. I’m coming out with a new lip palette called ‘Edward’s Best‘; it’s all about my best selling lipstick shades. That’s what I’m most excited about.

Would you say, this is going back to your theater and modeling, has any of that stuck with you or helped you with your career in beauty?

EB: Yes, very much so. So much with my experience modeling, and still the culture of casting models and seeing what models are popular now and keeping up with trends; all of that greatly influences what I do now. While my line is very timeless and not really based on trends or seasons, I certainly am inspired all the time by experiences I’ve had modeling myself. My partner is photographer, Ruven Afanador; so you could imagine the rich source of inspiration there. So that’s just so much inspiration to be handed. I’m greatly influenced by surrounding myself with photography, surrounding myself with these beautiful supermodels. Even to know women that I grew up admiring- that they should become a fan of my makeup- is kind of the ultimate moment.

That’s truly great, I feel like a lot of the younger people that start modeling don’t necessarily have another plan or vision for their future, they just sort of fall into it… to see people who have taken the things that they’ve learned within the industry and then transform it into incredibly successful careers, it’s really very inspiring.

EB: Yes, and I was lucky too, that my experiences modeling really shaped a lot of my beauty ideals. I moved to London and modeled with Storm over there. My agent was super stylish and has always been very chic and she opened my eyes to a lot of not only what was going on in the modeling world ten years ago; but to what I needed to know what was going on in the 60s and 70s… She opened my eyes to all of that and I’m very fortunate to have that to train my eye, what I should be looking for.

On the Street: PFW Day 1