When Sebastian Sauvé made his runway debut at Calvin Klein last summer, his bright blue eyes and blocky, angular face garnered him a lot of notice. When he was featured on the cover of the second issue of L’Officiel Hommes Germany in the fall, he quickly became a face to watch. Born in America and raised in Germany and England, Sauvé held off on modeling for several years after being scouted to focus on his studies. The wait has clearly paid off. Sauvé spoke with Models.com on the eve of his first show season in New York back in February.

MDC: How did you get discovered?
SS: I went traveling with my girlfriend before I started university for four months. Florida, Central America, and our last stop when we were completely broke was Los Angeles, at a dirty dive of a hostel. I met a guy there named Scott, from New York, who wanted to be a radio presenter. I was hanging out with him and he asked if I was a model. He knew people at Ford in New York and then he organized a casting in Los Angeles. They said I was a bit tall but they liked my look and they asked me if I wanted a job but I was only there for a few days until I went back to England. They recommended a few places I should pursue when I had time in London. Then after a year I went into Premier in London and they picked me up.

MDC: When did you graduate from university?
SS: I actually have one year left. I did two, I took this year out, and I intend to go back in a year or two. I’m studying business management, which is such a pointless degree. You can’t learn to run a business from reading a book. I’ve learned more working in a chicken restaurant than in a university. I definitely want to go back and finish but I might change my degree to marketing.

MDC: You’ve had a lot going on in the last year or so…
SS: I’d say last half-year, about six months. It was a slow start because of my situation, living away from London, but then I pumped out a bunch of editorials. And then I did Paris and Milan in June, and those were my first-ever shows. Calvin Klein was the first show, which was really good. Originally I didn’t want to go to Paris because I didn’t think it was my scene because of my size. They’re so intensely skinny there, but then I got directly booked. Then more editorials. While I was in Paris, I was supposed to go back to England and pack up my apartment into storage in two days and start an internship in London, but then last-minute they said I had to stay in Paris one more day and buy myself a new ticket and all this. Eventually they convinced me to stay and that was the L’Officiel Hommes Germany shoot and when that came out in September I was on the cover. That cover, everyone recognized it, so I think that really made me.

MDC: Good decision on your part! So are you still doing the internship then?
SS: I did three months for the Gucci press office. It went very well. They said I was the best intern they ever had. And that was completely separate from modeling. It was business-related and I figured if I did it within fashion I would pick up a few contacts while I was there, which I did. I really enjoyed it.

MDC: Why did you choose to pursue marketing?
SS: I’m a businessman. I like coming up with ideas and putting those ideas forward and seeing the results.

MDC: Are you living in London now?
SS: I guess I’m technically homeless and have been since I moved all that stuff out of my flat into storage. While I was doing the internship, I was couch-surfing. As soon as I finished that I went home where my mom lived and slept on the couch there. Then a holiday in Portugal to visit my girlfriend where she was working, then I came to New York for a month and stayed in an apartment out of the same suitcase I had been living out of for five months. And then to Spain and back to my girlfriend at her parents’ house. And then Paris and Milan, and now I’m here. So when I get back I need to try and get my stuff out of storage and have a home again.

MDC: How much longer do you think you’ll be living out of a suitcase?
SS: I hope to get an apartment when I go back to England, an hour and a half away from London in the Midlands. At the same time, I do want to take my career to as many corners of the world as possible: Moscow, Rio, Cape Town, I want to do all those thing while I can. But I do want to have a base that I can go back to.

MDC: How are castings going so far?
SS: Good I think. It’s so hard to tell because you don’t get the feedback that you want. But I do the walk, the polaroids, try the clothes on for all of them, had some callbacks, some fittings, some confirmations already. So fingers crossed. This is my first time doing shows in New York. 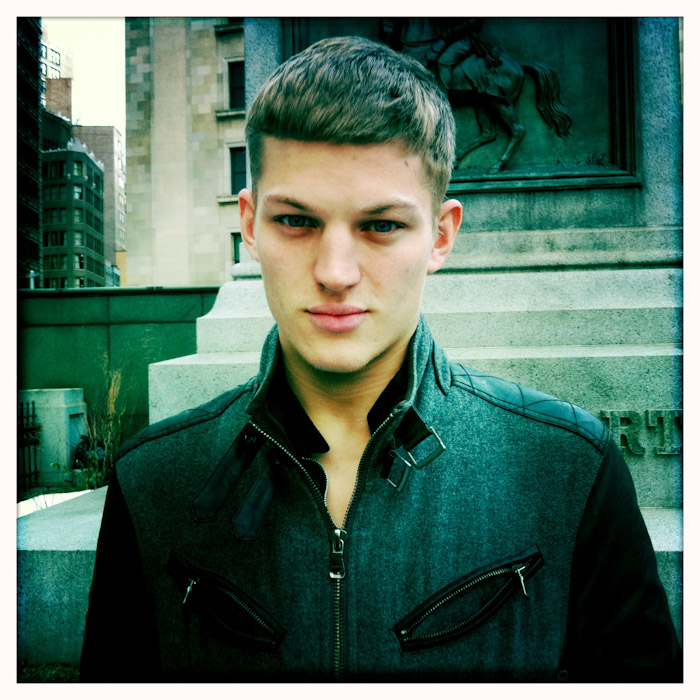