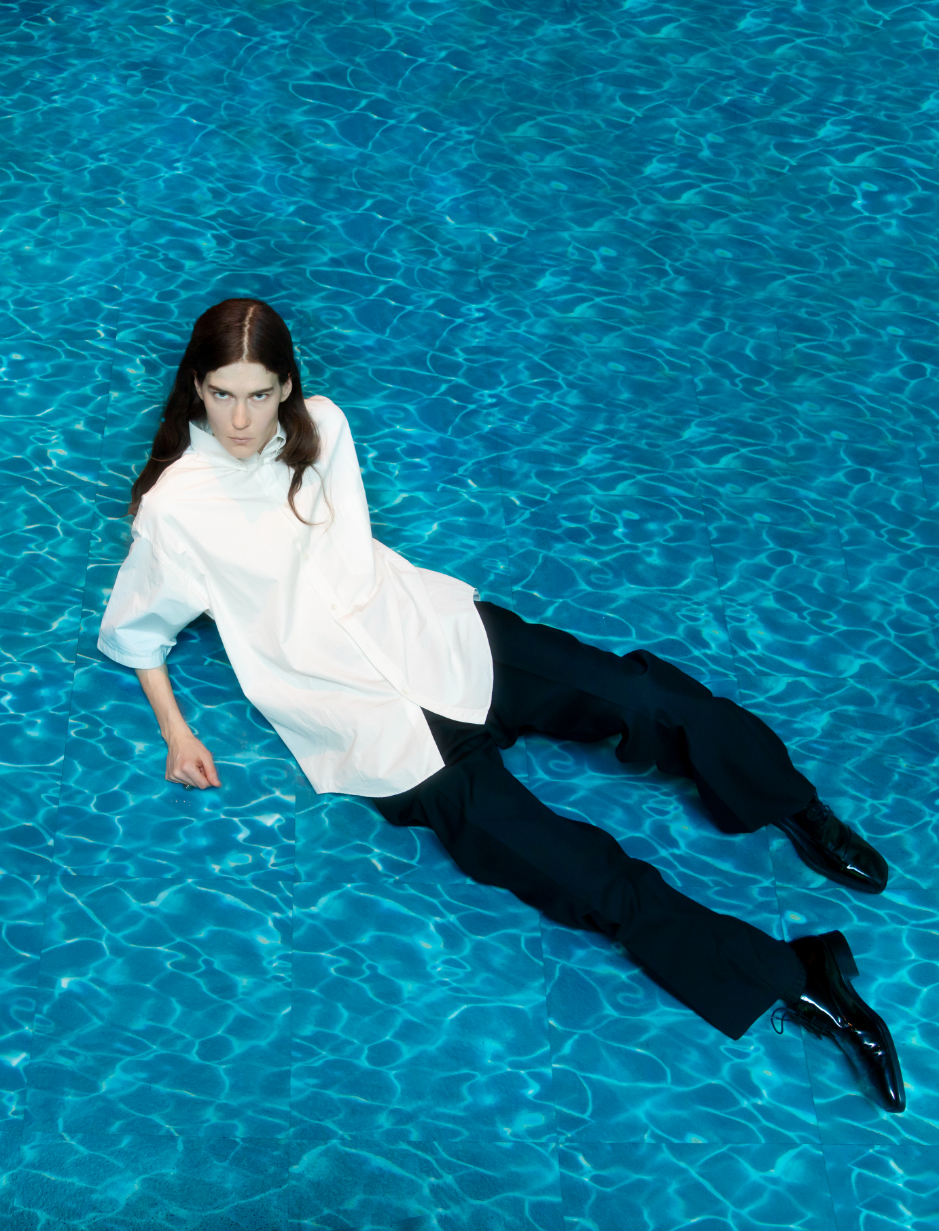 Art, fashion and music collide when interacting with polymath Eliza Douglas’ long-winding career path. After perceived rejection from the modeling industry in the early aughts, the androgynous multi-hyphenate took a chance at honing her creativity at Frankfurt art school, Städelschule expressing herself through large-scale, distorted paintings that warp anime icons, advertisements, and slogans. Funny how things come full circle as Douglas’ new undertaking piqued the interest of Demna Gvasalia who casted her triumphant runway return at Vetements and as a constant presence at Balenciaga. “Working in the fashion industry at all at this point in my life is a surprise,” Douglas explains. “And I wouldn’t have expected to make real friendships and feel like I am actually part of something important.” From setting up a new show in LA to jetting to Paris to open Balenciaga’s first couture show before heading back to Frankfurt to work on her next performance piece, we tracked down the busy creative to ask about her model beginnings, her favorite exhibitions, and being the main attraction at Balenciaga’s ‘Clones’ show.

I wanted to start from the beginning of your story and talk about when you first started modeling.
Starting from the age of 12, I would be approached by scouts from time to time. I tried a few agencies, was mostly rejected by jobs, and my appearance was often criticized. I was “too big,” ” too muscular,” or “too manly” etc. The main jobs of note that I got were walking in the Helmut Lang shows in the early 2000s. They were intimidating in scale, but the people that were involved were very nice. And of course, the clothes were amazing. So I think back fondly on those jobs.

Do you remember your first experiences with Helmut Lang?
I grew up in downtown Manhattan, so one thing I remember was I felt very grown-up walking to the Helmut Lang office on Greene Street for the first time, which was about 10 minutes from my childhood home. For my first casting with them, I had to come straight from my high school basketball game. For some reason, it didn’t occur to me to change, so I arrived in my uniform, sweaty, with messy hair, etc. Their office felt so surreal and foreign to me but I remember that, unlike a lot of the other modeling experiences I had in that era, the people felt very kind there. I remember Melanie Ward was there that day but I can’t remember if I met Helmut that day or not. I think so.

When it comes to the first show, it is hard for me to differentiate in my memory which show was what, since I walked in a few of them. I remember that one track we walked to was an Erykah Badu song. I remember Alek Wek asked me about school because I was trying to study for a test while waiting for hair and make-up. I remember I had a big crush on Amanda Moore, but never spoke to her. I remember Elfie Semotan was very kind and took care of me a bit. I remember that Helmut would always say hello to every single model in his show when he arrived, and I appreciated this. I’m sure I was really nervous being there in general and was especially afraid to walk. Back then I was often told I had a bad walk and people were always trying to fix it.

And what about your walk now, all these years later?
Refreshingly, it has been a non-issue. When I met Demna for the first time he asked to see me walk, and I felt the need to warn him that I don’t know how to walk correctly, like a “model” and he replied something like “That’s good. Just walk as you walk down the street.” So that is what I do and what I have done in his shows ever since. I really appreciate that Demna wants the models in his shows to be themselves and I love Balenciaga’s casting in general. I always meet interesting people when working with them, from all walks of life.

You often collaborate with Demna Gvasalia and have walked in many Balenciaga and Vetements shows. How did you first meet Gvasalia and how has the relationship between artist and muse grown between you two?
I’m not sure I would define Demna and me as collaborators, although I would be honored if it was the case. I’m there to help execute his vision, but I’m not sure how much I contribute creatively to what he does. I mean, that’s not something I would feel comfortable taking credit for. But I am proud that I can be a part of his project since I think he is a genius. I first met Demna in 2016. I was going to school in Frankfurt and a classmate of mine was an old friend of Lotta’s (Volkova). She was a big part of casting Demna’s first Balenciaga show, and I assume she asked her friend if he knew anyone who might be a good fit. Without my knowing it, this friend suggested me to Lotta, and then she wrote to me. She asked me to send some photos and then they asked me to come to Paris for a casting. I thought there was no way in hell that I would be modeling again since I knew I was a lot older than the average model these days, and I’m a lot bigger, more muscular, and more androgynous than the average model. I went anyway because I figured I might as well get a free trip to Paris. To my surprise, it worked out and I’ve had the pleasure of being in all his shows and a bunch of other projects since then. Although we haven’t spent tons of time together, I feel a certain kinship with Demna. I am grateful for what he has brought to my life. I feel a real affection for him and at this point consider him a friend. Also, while Demna is obviously the heart of the brand, the team that works with him is, of course, so important. I really respect all of them.

What has being a model allowed you to explore?
Modeling when I was a teenager helped me have access to something besides my school environment, which I really didn’t like. Although I had bad experiences, the people I met that were nice meant a lot to me. It added variety to my experiences at the time. At this stage in my life, it has a different meaning. It is not my primary purpose nor is it my main source of self-esteem or identity. I was already establishing myself in a separate, more significant career as an artist but I didn’t expect that modeling again would add so much to my life. Being around the Balenciaga community feels sweet and familiar at this point since we have been working together for 5 years. I love the clothes and am generally inspired by what Demna does. He is beyond being just a fashion designer. He’s an artist.

What has been your favorite exhibition to participate in so far?
As a painter, I think my favorite was my show “Josh Smith” at Overduin + Co. because I think it is the riskiest and strangest show I’ve done. In terms of performing, it is hard to say. When I started working with Anne, I had never really performed before, so with each series of shows I do I feel like I evolve quite a bit as a performer, and also my relationship with the whole thing has changed a lot over time. The first show that I started to feel a bit more comfortable and bold in was ANGST at the Hamburger Bahnhof in Berlin in 2016. That is also the first time I started doing the styling for the work, and also performing music live, so I was involved in a much more dynamic way.

You have new work and music on display at Anne Imhof’s Natures Mortes at Palais de Tokyo, what was your process of creation in the past year leading up to the show? How has collaborating with Anne Imhof altered your perception of art?
I have often struggled with low self-esteem, so one way that Anne has been hugely impactful has been believing in me when I was unable to believe in myself. Seeing a certain potential in me that I wasn’t aware of. I probably wouldn’t have thought I had something significant to give as a performer if I hadn’t met her.

In terms of working on the music, it is what I spent most of the pandemic doing. I finally learned how to make music with the computer, so that was really expensive for me. I got interested in learning how to write a large variety of music, and I did. Some of the music I made is a permanent part of the installation, and then we will introduce more when there are performances in October.

Technology has reframed how our culture understands reality and deep fake videos are pushing the limits of what is real and ethical. How was the experience of ‘walking’ for Balenciaga S/S 22 ‘Clones’ show and how did you partake in the illusion?
It was fun being a part of that project. Leading up to it, the designers were fitting all the looks to me, so I got to spend a lot more time at the atelier than usual. I’m sure it is difficult being a full-time fitting model, but I really enjoyed being a part of that process and witnessing how things work over there in a more intimate way. As we neared the shooting date the team realized we would need body doubles, so they had to find a bunch of models that are my height to help us. The poor things had to wear these grotesque masks of my face in order to make it easier for them to later superimpose a digital version of my face on top and then they were trained to walk like me. In the end, about half of the looks you see are fully me, whereas the other half have someone else’s body with my face attached. There was a live audience of about 150 extras who were all wearing Balenciaga archive pieces. We shot each look a bunch of times in order to get different camera angles and shooting methods.

Who was the first artist to make an impression on you?
Well, one thing was Matthew Barney’s The Cremaster Cycle. I was in high school at the time, and it was near the Guggenheim so when I could I would go over there and watch the films, I kept going back and would watch them for many hours. I also was really into Nirvana. 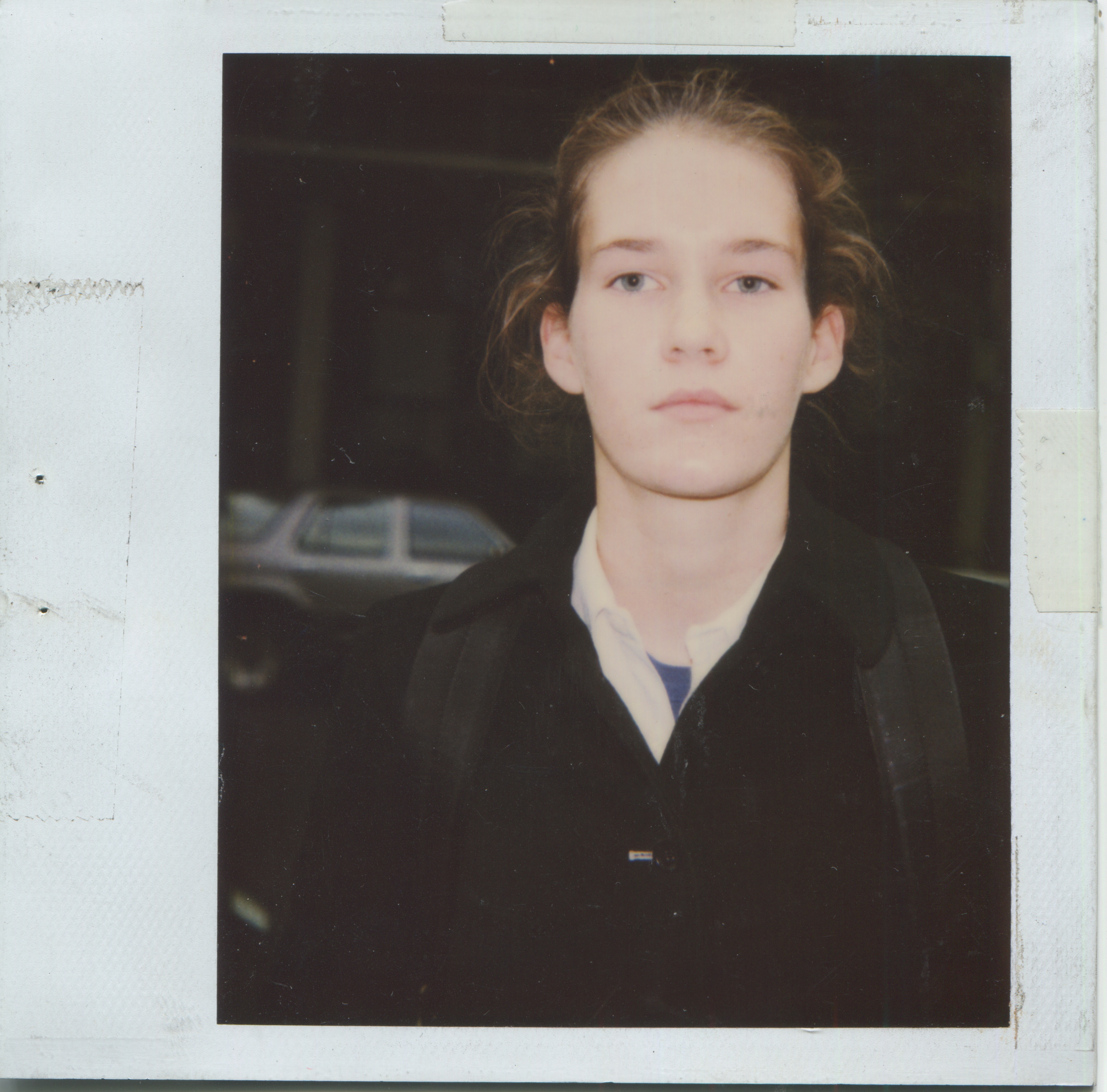 What projects or collaborations are you working on next?
I just opened a show at Overduin + Co in Los Angeles, which will be up until the fall. The performances at the Palais de Tokyo will happen in October and I plan to have a painting show at Neue Alte Brûcke sometime in the fall. Michelle Lee Out at Allure, Couture is Almost Here and more of the news you missed
NEXT Couture Continues, Vogue Netherlands is Closing and more of the news you missed
Top