Well look at that! Women NY now has an identity and it is as decided as it is deeply sophisticated. The significance of that achievement is that one of the legendary agencies in New York, founded on a tradition of ultra-high fashion imaging, moves into a new decade with it legacy not only intact but fully burnished. Like any good brand that has established its taste point Women, for its FW10 packaging reprises the now signature gestures such as a beautifully produced fold-out box, this time in navy ultra-suede with a shock of hot pink interiors all the more to play off against the classic olive green of the card-holder. And the cards, in a style that has become indicative of Women, is that 4 panel fold out featuring images that render those Women models as the epitome of glossed out high glamor. The fact that in such a short period of time the agency has come to locate such a consistent and controlled visual identity testifies to Louie Chaban’s quiet faith in the power of taste to persuade all the variables…clients… models…mother agencies to fall under the spell of that Women Mgmt aesthetic. That power of persuasion stands ready to serve the talent at Women very well whether they are the iconic girls on offer this season (think Angela, Karen, Isabeli) or that vital new wave of current campaign queens (Nimue, Iselin, Jamie). And it seduces that wave of discerning clients to hunt rigorously through Women’s new board for that girl who will be this season’s Mirte. At the end of the day, this is what summons respect for the design work of Jason Duzansky . It is at one and synonymous with the management philosophy of Women and stands as a lesson to those younger agencies and managers that understand and crafting the image of your models according to the highest values of fashion is what gives an agency its ultimate credibility. That achievement is what will keep the name of Women historic. 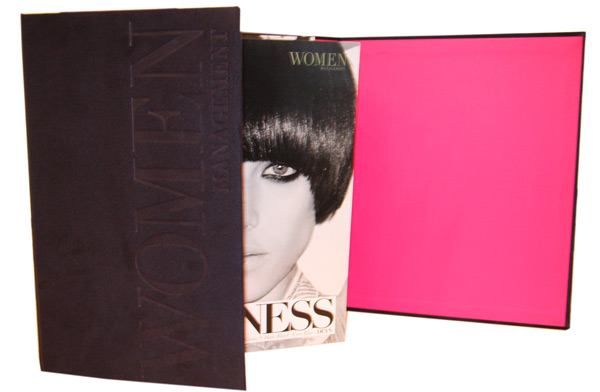