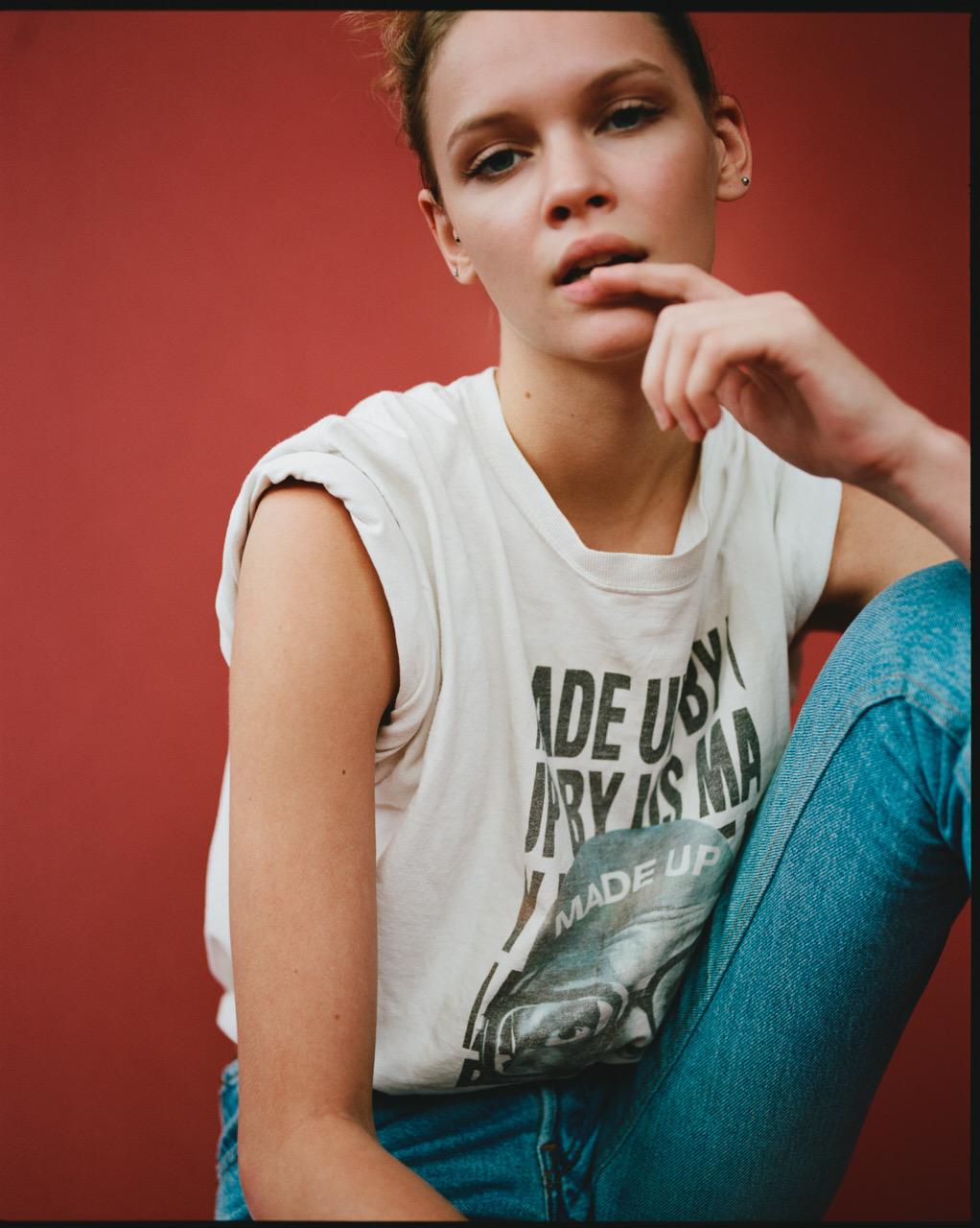 Social media has ushered in a new era of savvy, digital polymaths and model Faith Lynch has joined the fray. Born and raised in Texas, Lynch began modeling after being discovered –in true 00s fashion– at a Wiz Khalifa concert. Soon after signing her contract, she went on to star in everything from Marc Jacobs campaigns to Miu Miu runways. A model, musician, and budding actress the talented triple-threat spoke to Models.com about combining creative endeavors, her advocacy for mental health, and why sexual harassment is still something for fashion to tackle.

First, tell us a bit about your background. I know you were scouted at a Wiz Khalifa concert?
It was right around my 16th birthday. A woman approached me, who I later found out was an agent, and asked me if I had ever thought about modeling. I think a part of [why I said yes] was because I didn’t want to go to school. She took some photos, sent them to her boss and they sent them to IMG here in New York.

I think by the time that we, as the general public, hear about a model she’s already gained quite a bit of success. But we rarely get to hear what it’s like before success strikes. What were your initial experiences of getting into modeling like? Do you remember what your first impressions of the industry were?
I agree I think that it takes work and clients who really stick with you to get your name out there. I got really lucky because my very first job in the industry was for Miu Miu, and a month later I did Marc Jacobs’ Daisy Love campaign. But before that, when I was really getting to know the industry, it was a lot of work and I didn’t know people in these big cities. I worked in Paris for a month, then in London for a month and it was places and people I was unfamiliar with. It was lonely but I wouldn’t have had it any other way. It’s made me appreciate where I am today.

You recently both starred in, wrote, and performed a song for the latest Polo Ralph Lauren campaign video. How did that come about?
That actually came about because of photographer Mark Seliger. Mark is part of a band called the Rusty Truck and he’s asked me to perform with them a few times. Probably one or two months before the campaign was shot, the Creative Director of Ralph Lauren happened to be at a show. He introduced himself after and told me, “You’re great. How can we get in touch about possibly doing something?” My agent later asked me if I knew he was the Creative Director and I said I had no clue! I ended up meeting with photographer and videographer, Matthew Brookes. I walked in and he said, “I want you to sit in that corner, and I want you to sing your song and I’ll record it.”

What has it been like to combine your modeling career with your emerging career as a musician and a performer? Has it been difficult merging those two worlds?
I think in a way it’s two worlds but it’s very much the same “creative industry”. It’s been difficult to make time for music. But I feel like I’m in a place now where I can say that I’m going to book out the next three weeks so I can sit in the studio as much as I can and come back to fashion later. I think that [fashion] now is encouraging being…I don’t want to say this in the wrong way, but being “more than a model”, having multiple career paths or interests. We now have models who design or actresses who are models, starring in different videos for campaigns. And I think that music is probably is the latest thing to become part of it.

What would you say are some of the challenges that remain untackled or are still being stigmatized?
I think there will always be issues in every industry, and we’ve come a long way from where we were two years ago when I first started. Even though I don’t have personal experiences, I know a lot of other girls have had to deal with sexual harassment and abuse, the domination of power. And that [change] is something I would really like to see. That there are creatives in the fashion industry, who believe that they can use their name and power to force young men and women, that needs to stop completely and immediately, right now. But there are more people willing to speak out about people who have attacked and abused them that way, compared to when I first started and didn’t see any of that. And I’m proud of all the brave people who have come out, and truly encourage those who haven’t to keep fighting.

You recently partnered up with Child’s Mind Institute to create a program for teenagers who suffer from depression and other mental health issues. Why has this been important to you?
I struggled with mental issues every day growing up, it took a toll on me, my ability to work, and in my personal life. That’s why it’s been so important to me, I believe that no person should have to suffer alone. It’s something that has changed a lot recently, but before you never heard of people taking days off because they needed to calm their minds, or a personal day because their depression was too much. It was always a physical illness, you had to be able to see it. So partnering with Child’s Mind Institute has allowed me to break that stigma for people who follow me.

What are your own plans for the future?
My plans for the future? I barely know what I’m doing tomorrow [laughs]. I just really want to work hard and push myself in the fashion industry, and I hope that my journey to have fashion, music, acting, and art…all the different things I do, pan out. Because I’m nowhere near where I wanna be, nowhere near the full potential I can reach. I’m just excited to see where my career path takes me with the different people I get to work with.