Beijing. The expected, notorious haze doesn’t meet me on the first two days of my itinerary. My reason for traveling all the way to the other side of the earth? There’s an underlying fear that the process of getting scouted is more horror flick than Cinderella story, an exploitative path for new faces crossing from overseas mother agencies to the boards and show packages of fashion capitals. That might apply in some cases but does it rule out the need of mother agencies, en masse? Is it an opportunity for emerging global markets to rise in ranks and recognition? What happens behind the scenes and how do mother agencies develop talent?

Before social media, the scouting process was for years hidden in fear of rivals stealing the next regional star. The world is vast and the ability to scout models from the far corners of the globe was much more of an effort. Yet, with model competitions and the popularity of online scouting contests rising, the practice has become more democratic and faster than before. With this mindset, I went on invitation by mother agency Longteng Model Management to China for a chance to see firsthand one of the largest new face markets and report on my findings.

The agency that has cultivated the careers of models like David Yang, Shujing Zhou, Wangy and Zhao Yan looks to continue their streak with a model competition hosted in Beijing. Arriving a few days before the rest of the party, I attend a photoshoot shot by Zack Zhang where talent is being shot for promotional images. It’s remarkably quiet for a photoshoot session but the atmosphere almost has to be silent with the sheer amount of bodies present – excluding the set team, there are over 130 girls (the 40 men in the competition are being shot on a different day) that were found by three scouts in the 34 provinces throughout the country.

Zhang doesn’t seem that bothered by the number of subjects as he’s been here before. “I’m shooting the group photo for the second time and it’s very interesting because it’s not just like a fashion or portrait shoot, it’s really about the art. It’s more graphic.” Here where art is commerce, uniformity is key and the mass of girls are all outfitted in sponsored leotards by Wolford. Some music finally comes on and I notice how some models hadn’t learned how to walk in stilettos yet, shuffling their feet awkwardly as they made their way up the tiered podium. Like synchronized clockwork, the new faces are grouped over 50 at a time to pose for their portrait. Reflecting on this process, the number of people present for the competition seems overwhelming but I remember that in the coming days the main objective of models getting scouted will become much more clear. 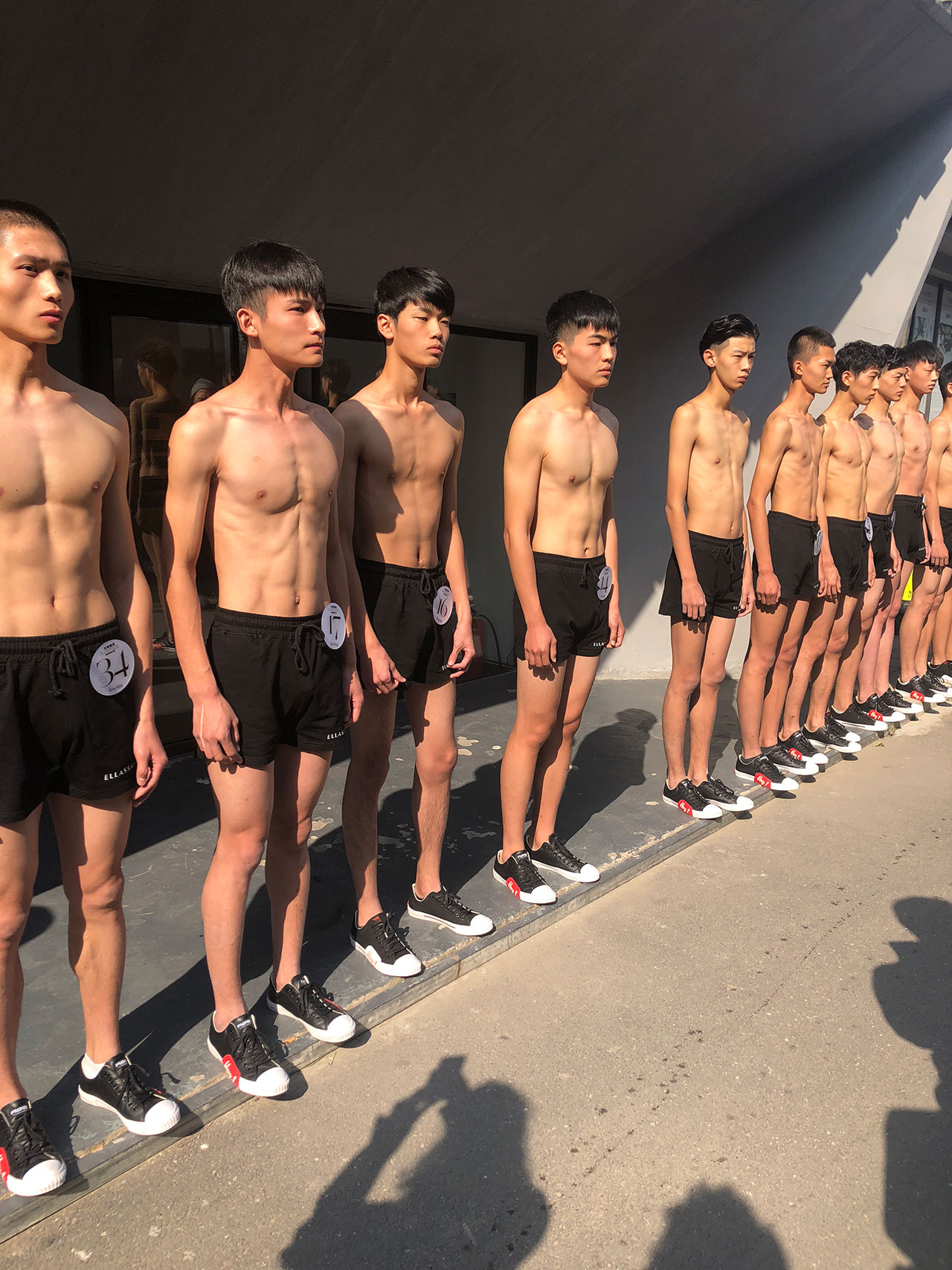 That purpose reveals itself as day 1 of the Longteng event begins and international agents assemble to pore over pamphlets presenting the models in the competition. Speaking with the visiting agents, the affirmed consensus is looks are not nearly enough, they’re in need of mother agencies to do the legwork of developing talent to have that irresistible, “it” factor that draws all eyes toward them. “When a model stands out to me, it is something of a ‘love at first sight’ feeling,” reflects Jason Valenta, director of scouting at Next Models. “A girl can be shy or nervous as they tend to be young when I first meet them, or they may not have a strong grasp of the English language, yet she still has this irresistibility in them that I recognize.”

For model agents, the time dedicated to meet models abroad is paramount just for the chance to see the perfect storm of beauty, personality, and confidence firsthand. “Mother agents are hugely important to me,” claims Valenta. “They are my eyes around the world and are my partners in developing models. I think when a model has a knowledgeable mother agent that teaches and helps build a solid foundation from the very start, the girl is more likely to succeed.” 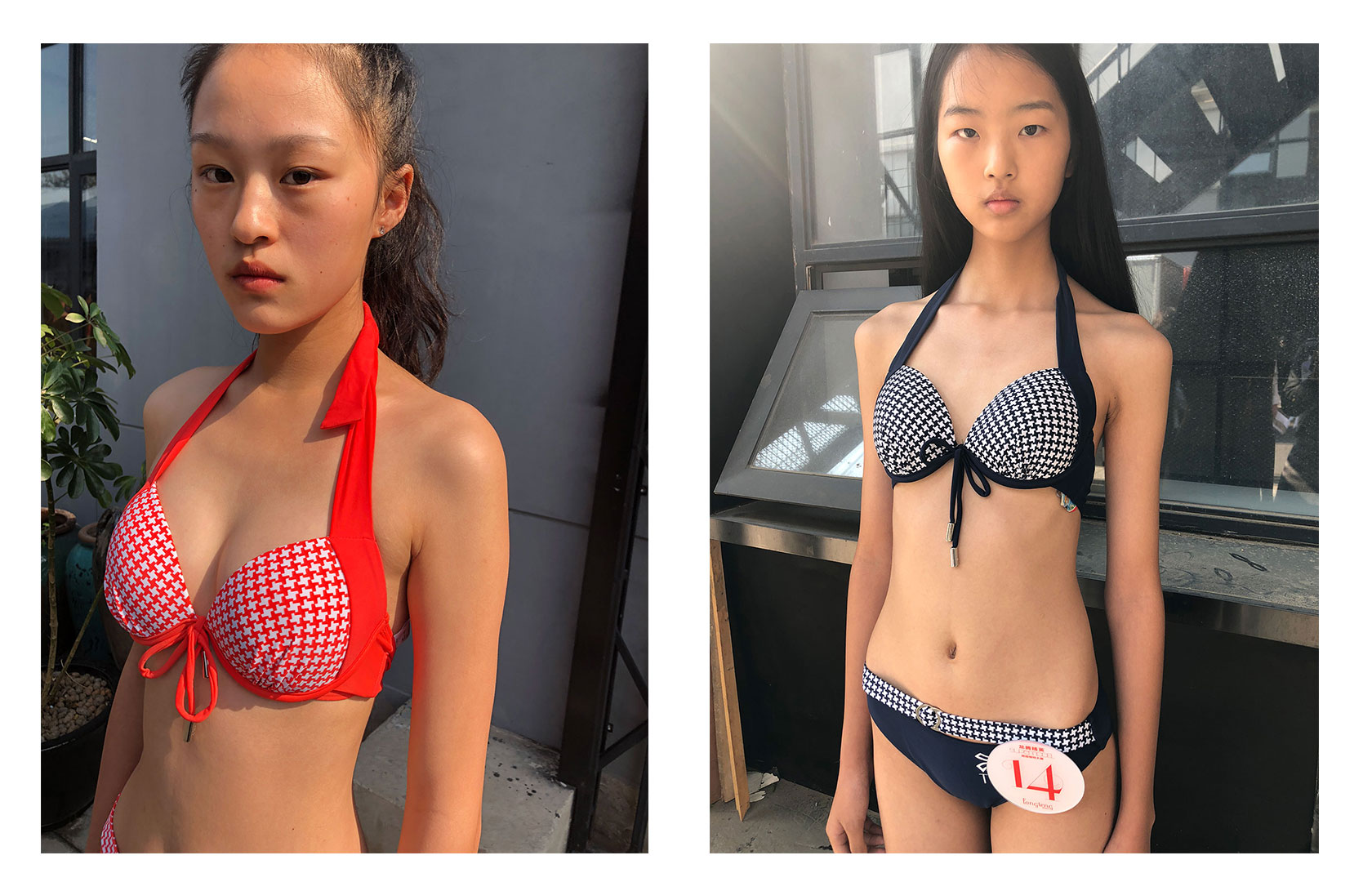 Back in the room, there are 4 models to a page with names, hometowns, and measurements clearly spelled out. In the pamphlet, they’re stripped down to black bikinis, jeans no shirt for the boys. Agents have come from New York, London, Milan, Paris, and Barcelona as judges for the competition but also to scout for their respective development boards. We sit on opposite sides of the room, pamphlets in front of us with models numbered, as the first boys file in, clothed in terry cloth shorts with Converse-like sneakers. Expressions of gratitude at this point of the event are numerous. “Longteng’s scouting event is a wonderful opportunity for us New Yorkers to see the potential talent to represent, not to mention build a strong relationship with a great agency in China,” comments Jody Gordon, director at Fusion Models.

Then, row by row the girls file in, in bikinis with numbers on hip, up until 127. Some are acned, some with braces still, most are teenagers – temporary factors as far as agents are concerned. Outside, agents pick some of these favorites for another go-see to take a closer look at the unsigned models looking to be placed. They stand in the street, in their shorts and bikinis, where you can see them in the sunlight. One of my favorite girls turns out to be 13. The other is in her twenties. The debate on age and when a model should be introduced in this industry has been contentious, to say the least. “I believe that a model’s age is only a number and a number does not quantify the maturity of a model,” Valenta mentions. “I believe as an industry we must protect our models whether they are 14 or 50. I have worked with girls that at 15 were ready to start and I have worked with girls that were 21 and not ready. It’s a case by case thing.” As far as getting a global industry on the same page, especially in regards to acceptable age limits, there seem to be more exceptions to the current rules in place. “Though I do not favor banning under 18 models,” Valenta asserts. “I do feel if a rule is put in place for certain bookings for underage models, the rule must apply to everyone! Our industry has to say what it means and mean what it says. If a rule is established, it should apply to ALL.” And the necessity of mature, knowledgeable new faces is understandable considering the amount of effort is put into visa paperwork, transatlantic flights, and finding housing abroad. 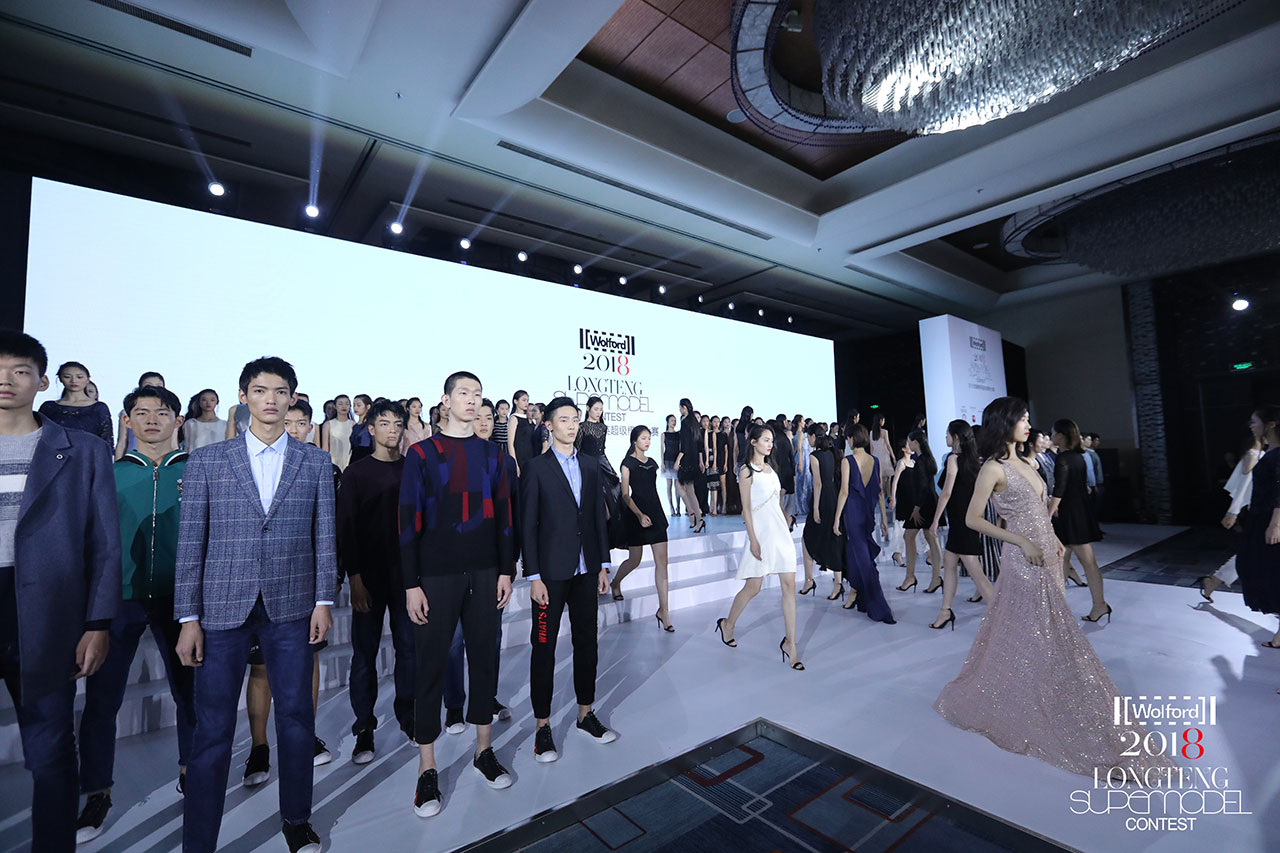 Competition day is here and at this point, the production is running like a well-oiled machine, language barriers aside. Fashion consultant, Trecey Cunningham, who moved from New York to Shanghai helps to dismantle those barriers for his agency clientele. “I initially came to China to consult with modeling agencies but as I spent more time here I discovered how much help different clients needed with accessing and understanding the global business,” Cunningham explains. “The market in China was already strong but I think as time passes it is becoming increasingly more sophisticated and more in tune and confident.” Bringing a Western perspective and educating helps quell unmanageable expectations. “I think a lot of models just want to be placed in a specific market just to wear it as a badge of honor and not necessarily because they can work well there or fit the criteria or needs for that location,” Cunningham claims. “I’ve always been very firm and proactive in making my models know that this industry is very professional and also subjective. I think it is very important to work hard but also to have a sense of pride and to have fun with everything you do.”

The competition finally starts as 161 models come out in total, and we go through the whole lot, rating on a scale of 10. I’m embarrassed to be rating people on their level of attraction or confidence – it feels like a vexing Hunger Games scenario. Two winners are announced, but in actuality, there are more winners than the ones crowned – time will tell who makes it to the top boards of modeling. 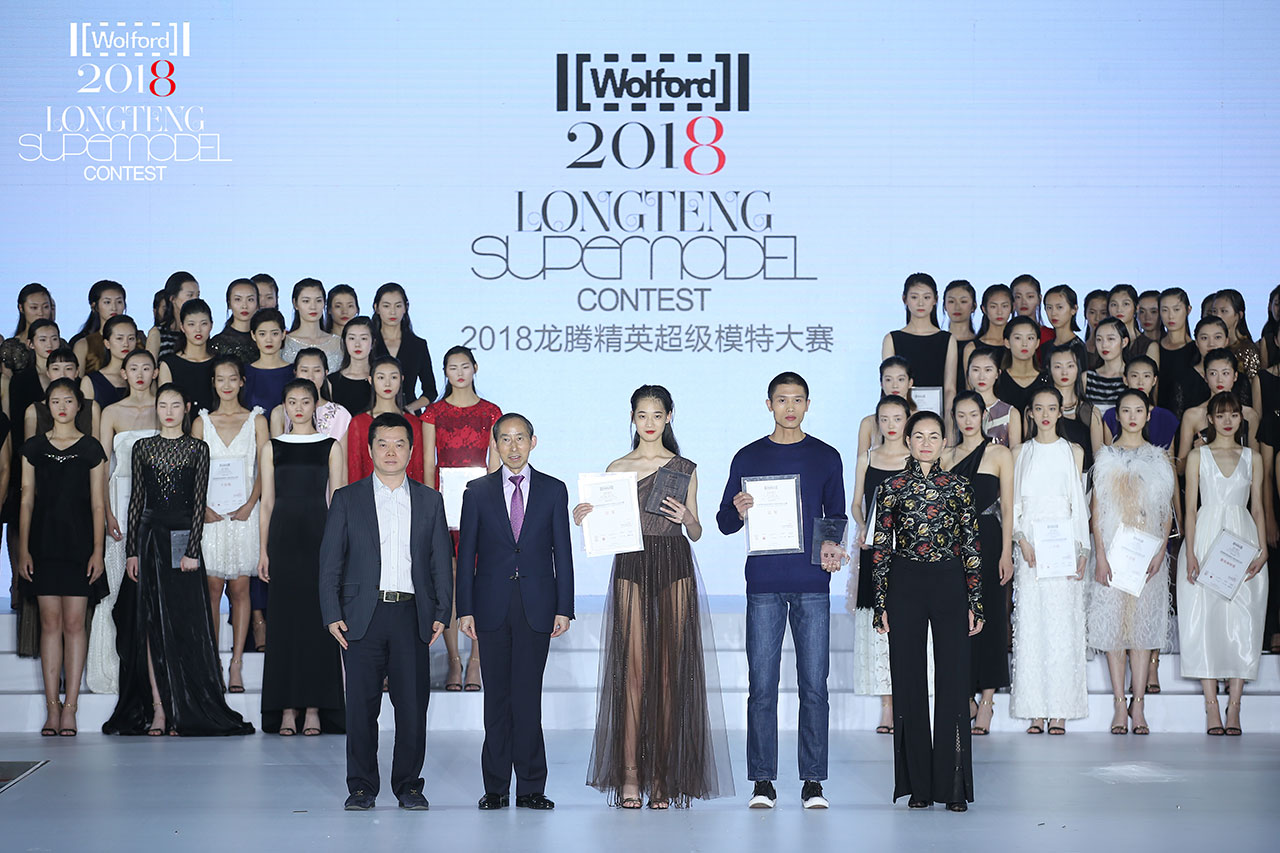