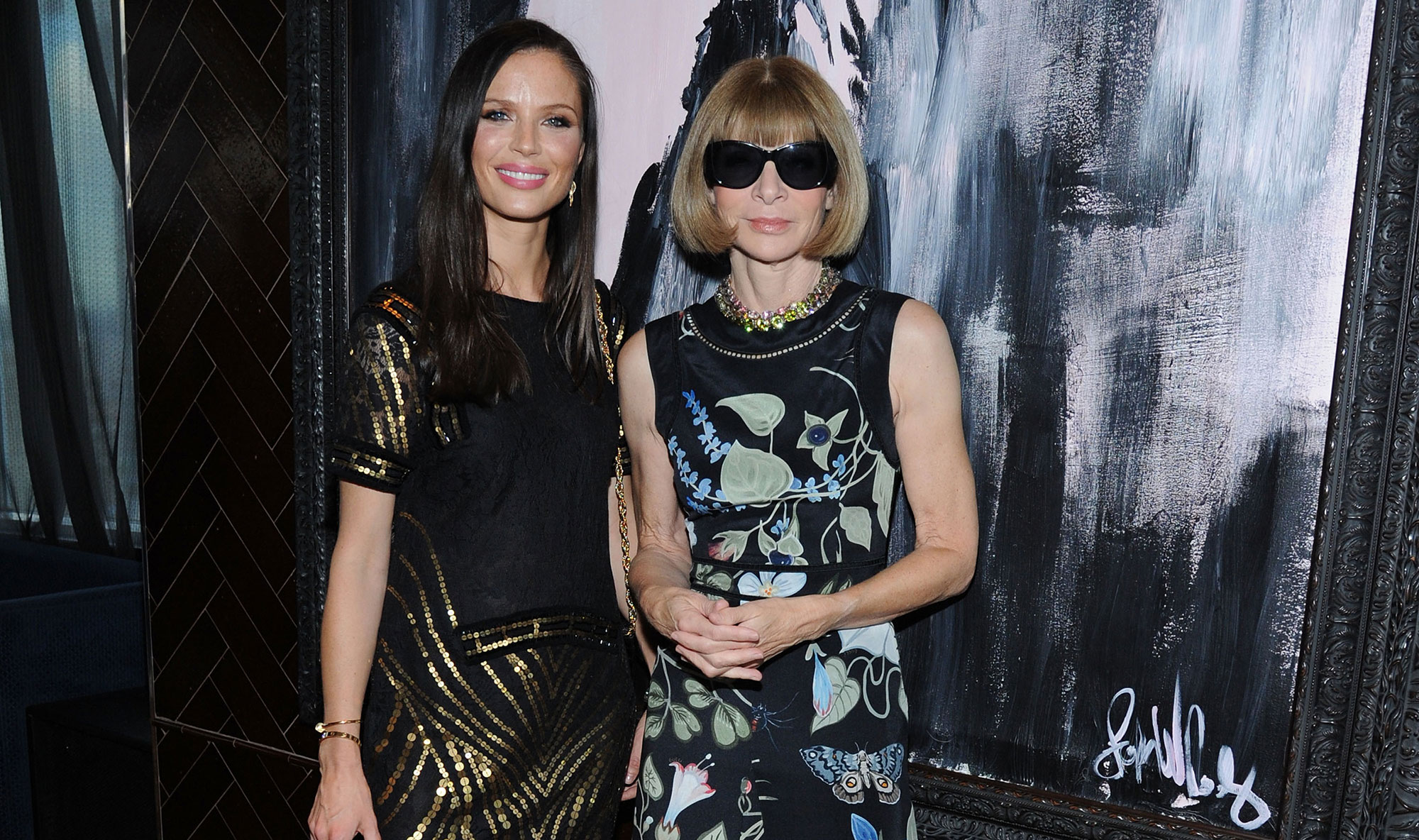 Georgina Chapman Breaks Her Silence on Marchesa and Harvey Weinstein
In an attempt to publicly rebuild her brand, Marchesa co-designer and estranged ex-wife of Harvey Weinstein, Georgina Chapman, broke her silence this week after months of going underground. A full media push started with actress Scarlett Johansson wearing Marchesa to the Met Ball on Monday and snowballed into two Vogue pieces, with Anna Wintour publicly expressing in her editor’s letter her support and asking the industry’s forgiveness. Weinstein, accused by many of rape, sexual assault, and bullying, required actresses in his funded movies to wear Marchesa on the red carpet – an action that Chapman vehemently denies knowing about
[VOGUE]

Miranda Kerr Gives Birth
Celebrations are in order for Australian supermodel Miranda Kerr as her and Snapchat CEO Evan Spiegel welcomed a baby boy this week! The healthy boy named Hart is Kerr’s second child and Spiegel’s first. Expect our gift basket in the mail!

The Founders of Diet Prada Talked Publicly for the First Time to BoF
The internet was buzzing this week after the release of the first interview from the duo behind Instagram-notorious Diet Prada, Tony Liu and Lindsey Schuyler. Its founders whose identities were made public October of last year by The Fashion Law, spoke publicly for the first time to The Business of Fashion about their account that provides biting social commentary and a side-by-side analysis of past collections and the contemporary designers ripping them off. The account started posting first in December of 2014. In the article by BoF the duo discusses their plans for the future of Diet Prada, Tony said, “Ideally, we would like to make this a business” and regarding the call-out nature of their post, “I don’t know why this industry is so self-protective. In every other industry, people say whatever shit they want and they should be able to do that in fashion as well.”[BOF]

@diet_prada unmasked: Tony Liu and Lindsey Schuyler, the secretive founders of the industry’s most feared Instagram account, star in BoF's latest print edition. While their names were revealed to the public previously, this is the first time the duo are speaking openly, as themselves, about why they started Diet Prada and their plan for the future. Visit businessoffashion.com to read the full story #dietprada #fashion ?: @camilafalquez

The CFDA Recognizes Kim Kardashian’s Impact on Fashion with “Influencer Award”
Kim Kardashian is set to receive the CFDA Influencer Award, the first of its kind at the Council’s annual Fashion Awards. The move recognizes Kim’s impact on the global fashion community through her massive social media following and ties within the community. The honor puts her in the company of Naomi Campbell, Diane Von Furstenberg, Narciso Rodriguez, Edward Enninful, Carolina Herrera and Donatella Versace who are all honorees this year. Steven Kolb, the CFDA’s president, said, “[The board] all agreed that Kim was someone who has really impacted the industry and has changed the way brands are presented. She’s a friend of a lot of the designers and has had great influence on fashion globally.” The event is scheduled for June 4th at the Brooklyn Museum. [WWD]

Heavenly Bodies: The Met Gala Happened
New York: On Monday night Anna Wintour’s Met Gala went down, and this year the exhibition was “Heavenly Bodies: Fashion and the Catholic Imagination”. The annual star-studded gala to raise funds for the Metropolitan Museum of Art’s Costume Institute is also the biggest night in fashion for the haute monde, celebrities, and top models. The themed red carpet is always a stage for fashion’s most extra offerings, take Rihanna’s Maison Margiela Artisanal papal look that stole the show; or Frances McDormand’s outlandish, but pulled-off, aqua Valentino gown; Katy Perry’s angel-winged gold dress; Bella Hadid’s more sinful custom Chrome Hearts get up, the list goes on. Inside attendees were treated by a performance by Madonna who aptly sang “Hallelujah” by Leonard Cohen and her own “Like a Prayer”.

Rihanna Drops SavagexFenty
And speaking of Rihanna , today’s the day that the unsupported have been waiting for. The Met Ball Slayer and ultimate bad gal continued her reign with the newest addition to the Fenty Empire, Savage x Fenty. With advertising visuals shot by Tyrone Lebon, the full range, body positive lingerie line includes 90 accessibly-priced pieces with bras available in sizes 32A to 44DD, and lingerie, undies and loungewear coming in sizes from XS to 3XL. Ranging from daily basics to the more risqué, Rihanna made sure she made something for everyone and the result is selling out as we type. Sabina Karlsson on Modeling and Becoming a Mom
NEXT Adwoa Lands Time, Model Alliance Rolls Out RESPECT, and more of the News You Missed