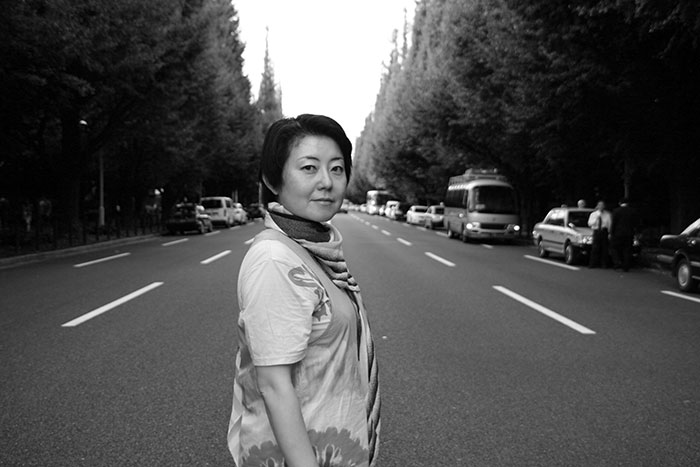 On the last official day of the Tokyo Fashion Week show in Shibuya, Models.com met up with Akiko Shinoda, “Shinoda-san” as the formal title allows, a woman of petite stature but endless enthusiasm and the Director of International Affairs for Tokyo Fashion Week. The invitation from the organizers of the week long event couldn’t be passed up to speak one of the most tireless supporters of Japanese fashion. She has worked diligently to unite designers to be on-schedule for their presentations, supported the new wave of rising talent with an incubator program, and bolstered government support to invest millions of dollars in order to help Japanese designers grow their presence abroad. We spoke to the history of the event, how she’s getting new designers exposure, and why the fashion sector in Japan is an absolute necessity.

How long ago was the Tokyo Fashion Week organized?

Tokyo Fashion Week itself was started by Rei Kawakubo, Yohji Yamamoto, & Issey Miyake in the early 80’s. But after they went to Paris, fashion week was organized by no one. Designers showed as they wanted so there was a show season period that lasted almost one month! So, ten years ago Japanese government founded the organization to reorganize the structure of fashion week. About 8 years ago, I joined this organization and tried to also collaborate with mainstream designers because at the beginning the Japanese government wanted to stop what we’re doing and take control of the event. A lot of edgy young designers were left on the outside without representation and unknown to the world still.

How many shows in total are there during the week?

What’s the mix between newer and more established designers? How many newer designers do you take on?

This time we have 13 new designers on the schedule. So, every season we have about 10 designers, more or less, that are coming up in the industry and join us.

And how do you select the new designers? Are you always looking for new talent or inviting them?

We have some programs for incubation. One is an incentive for new designers to let them show in our space for free during our morning time slots. This time it was DressedUndressed, Sulvam, Motohiro Tanji, and more. We have committee members who select these talents.

Through the year do you continue the incubation? Do they have access to resources or things that you have?

Yes, we have two times a year our fashion week, and a part of this is I have a project supported by the government to bring our promotional events to the overseas market. For example, 5 years ago I collaborated with Pitti Uomo bringing 21 Japanese designers there. I went to Saudi Arabia, Singapore, and Moscow fashion weeks and participated in their shows. So, every year it’s a different country or a different project I am doing. Last January I had a pop up store in Selfridges in London, one of the most amazing department store in the world. We had one good space on the 2nd floor men’s floor with 5 or 6 designers that were quite unknown. It was great.

That’s a great way to get them exposed to the world.

Yes, but my difficulty is in order to have budgets from the government I have to re-negotiate with them every 6 or 7 months, because they change positions every year. You know not to have too strong of a connection with a certain person since they’re continuously changing. So, every year I have to explain from the beginning what is the fashion industry and why is it important…

That’s surprising because I think Yohji, Rei, and Issey Miyake are all known worldwide and they’ve really presented an image of Japan that has stayed very contemporary and very design focused. It would be great to see new designers emerge again.

I believe that fashion is very important, among the other industries, for this country. When other countries have an image of you that is very fashionable that means all of the other products and prices can rise. Also, tourism is a big part. Our city is gorgeous for fashion, right? That’s why those industries are so strong in Paris and New York, all of the tourists come. It was a good success using fashion week power. So, Tokyo should have fashion enforcement.

Is the fashion industry in Japan is still very much independent designers, there isn’t like an overarching owner like LVMH or Kering?

Look at Sulvam. His company has no assistant, no one, no intern. He is just doing it alone.

That’s pretty amazing. There are a lot of designers that start like that especially in New York with the CFDA incubation program, so it’s the same approach.

But in New York maybe the independent design is such an attitude to have a good partner to support in the management and the finance and production.

Is Tokyo Fashion Award part of fashion week? How does that work?

We had some awards already that were historical. They were locally known but nothing that presented winners to the World. We wished to have the Tokyo Fashion Award because we have designers like Sacai and Visvim at this moment that are huge major players. But what after them? We have to now try to find them and help them get to the next step. That’s why the Tokyo Fashion week judges are only buyers. No press are on the panel, no people from organization, just the buyers from top retail companies like Isetan, United Arrows, and others.

The ANDAM prize in Paris or the CFDA fashion awards, has a different approach in comparison. It’s very design-focused. Is it something that you would think about for the future or no?

I saw that for the Japanese designer what they lack is a business mind. Negotiation with foreign buyers. That’s something they completely lack. So, I see for the Japanese young designers to have the buyer is more strong and more reasonable. Because we have so many talented designers here with a very good reputation to the press. We have plenty but for the buyers, it’s not so many connections made.