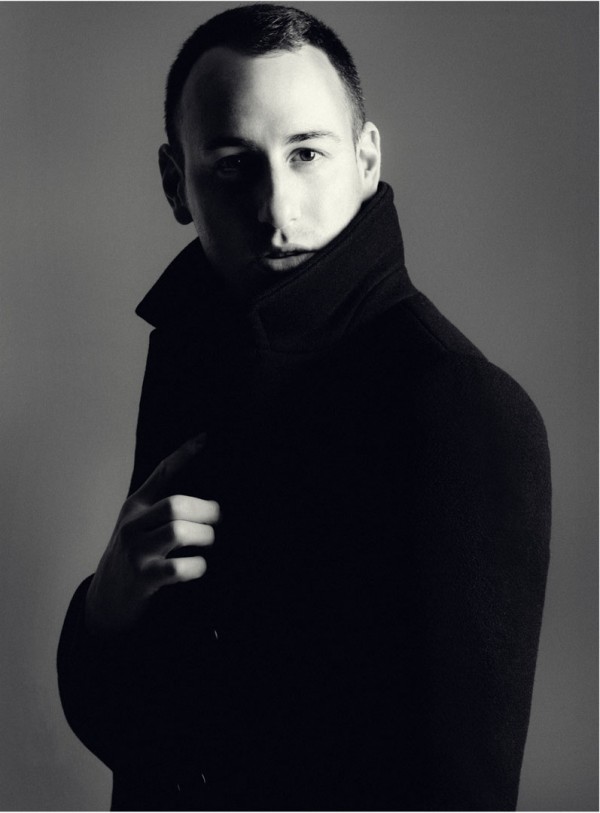 Fashion isnâ€™t just for paper pursuits. While the good old-fashioned printed magazine is an enduring tradition, the boundaries have been broken. As the role of new media increases, pioneering publications create names for themselves via an online platform. One of the most notable (and innovative) online magazines is Contributing Editor. Launched in 2008 by former Details fashion editor Matthew Edelstein and Ryan Schmidt, Contributing Editor strives to serve as both a must-read for the fashionable urbane man as well as a launch pad for exciting new talent. Models.com caught up with editor in chief Matthew Edelstein to talk menswear, creative freedoms and the changing landscape of publishing.

MDC: How did you get your start in fashion?

From a really young age the world of fashion fascinated me. When you’re young and from a small town the only job you can really think of being is a designer.Â  I came to Parsons, did a year of fine arts and then went into the fashion and design program. I decided early on that being a designer was not the right fit for me so I changed majors and ended up graduating with a degree in fashion business. I wanted to be more of a big picture thinker and not so much about actual garments. The idea of fashion – the culture and the people, that fascinated me more than making clothes per se. It wasn’t my strong suit.

When I was in school i had a lot of internships and towards the end of my time at Parsons, I was an intern at W in the accessories department. I worked with Anne Slowey who is now at Elle. She taught me a lot about working at a magazine; Anne is very inspiring and thoughtful about fashion. 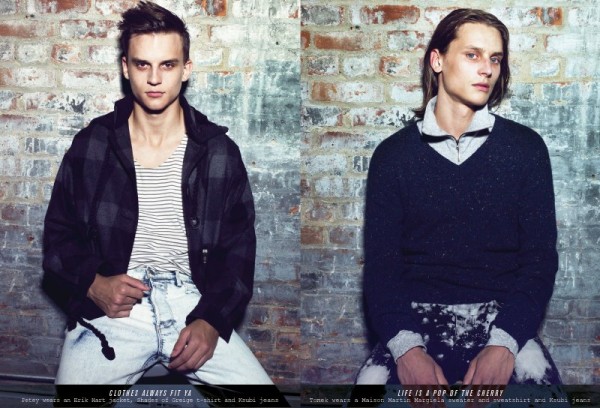 Petey Wright and Tomek by Sharif Hama for Contributing Editor

MDC: You also were able to assist as well, how do you feel that shaped your career?

Michel Botbol moved back from Paris and was looking for an assistant. I along with several other people applied for that job and I ended up becoming Michel’s assistant when he was at W, then I moved on to Harper’s Bazaar with him when he became creative director of Bazaar.

Being an assistant at that level is an amazing learning experience because you’re working with the best photographers, have access to the finest clothes, the best models – everything exists in a rarefied state. From that point on I knew that I wanted to be a fashion editor. I love the editorial mindset, having a specific point of view and seeing it through. It’s what I always had it in mind for my career but didn’t know how to articulate it into a specific profession.

MDC: You were also the fashion editor at Details. How do you think you influenced the style at Details during your tenure?

I think we really refined the fashion perspective of the magazine. For me it was really important to define the Details man through pictures and through the fashion that went into the magazine and we really accomplished that over those 4 years. In my opinion the fashion is stronger now and there is a tighter point of a view than there was when I started all those years ago. 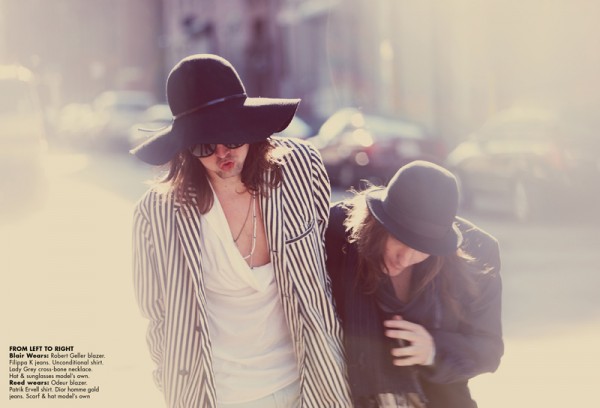 The Young Lords by Guy Aroch for Contributing Editor

MDC: What do you think the difference is between working in men’s fashion vs. women’s?

At the end of the day it’s fashion and it’s about creating pictures and working with photographers so in a sense there are similarities. Women’s fashion is much more competitive and exists in a different state. Mens’ is a little bit more low key but we always hope to bring the same creativity and passion to the work that we do.

MDC: Why did you choose the web as the forum for Contributing Editor, rather than a physical magazine?

Print is obviously extremely price prohibitive, publishing a magazine on paper is an incredible investment. Me being one person working with a partner, I don’t have those kinds of resources. This coupled with the fact that online just seemed more like the future and it fit in with what we really wanted to do with Contributing Editor, which is to give the next generation a chance for exposure. So much of my generation is shut out from those big printed magazines by the generation behind us. There is a lock down by top photographers and people of my generation needed a kind of forum for their work to shine.
Eli 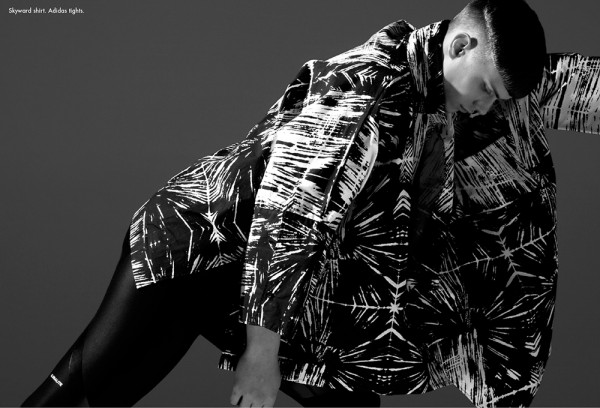 MDC: Where did the idea itself come from?

I left Details full time last summer and I quickly realized that being a freelance person you’re waiting around for people to come to you. I wanted to be entrepreneurial and put myself out there more pro-actively. My friend Ryan Schmidt came up with the idea to just kind of start working with our friends, do photoshoots and put them online really quickly; it turned into a kind of editorial project. It began a little bit more low key but then we realized that we could easily do it and people would be interested in working for us and have access to great young photographers and models.

MDC: What is your role at Contributing Editor? 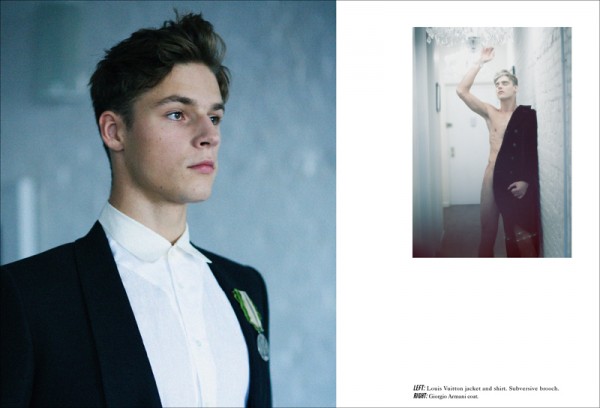 MDC: How do you select / find the talent for Contributing Editor?

You meet with one person and they’ll introduce you to someone else, it’s really such a small world at the end of the day. New York fashion is an incredibly tight knit group. It generally happens quite organically. We also do have an email address on the site and people email submissions. We mostly don’t publish things that are emailed because I like to have a relationship with the people I’m working with but once in awhile we’ll get something truly great and put it up. We also don’t run anything that hasn’t been done specifically for contributing editor. We don’t repurpose content from other places – we wont’ rerun other magazine’s editorials. It’s all original.
MDC: Describe one memorable shoot you’ve done for the magazine thus far?

Travis Davenport and his twin brother Bryan, they are really into skateboarding and they had an idea to do a fashion story with them doing skateboard tricks and we ended up shooting it really easily in Prospect Park in Brooklyn. It was kind of their idea coming together in a way that they’d never been able to do before because as a model you don’t really get to express your ideas, you are expressing other people’s ideas in photos and I felt the joy really came through in these shots. There are a lot of high points, it’s an exciting way to work because you can be much more creative and free. 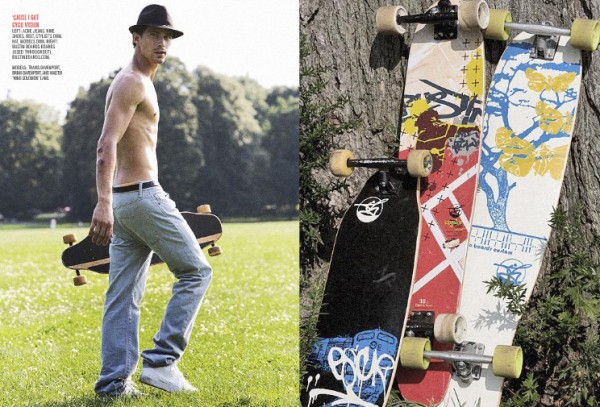 MDC: Do you think Contributing Editor brings something different to the table?

Definitely, different than what other American men’s magazines are doing because they have a huge readership and have to appeal to customers and audience in order to sell those magazines. We don’t have those constraints we don’t have to sell any magazines so we can do pretty much whatever we’d like to do that fits into our vision. I want CE to be younger and take more chances. Have an editorial point of view that is maybe a bit left of center.

MDC: What makes working this way different from the day to day at a magazine?

If I wake up tomorrow and say ‘I want to do a fluorescent club kids story’ i can go out and do it the next day without having to hear from my boss that he’s not ‘feeling fluorescent club kids’. At fashion magazines there are a lot of rules and you have a ton of people with strong personalities who don’t always agree, you have to navigate political waters and so when I left magazines after being on staff it was a great freedom and I want to extend that sort of freedom to other people, across the board with everyone I get to work with.