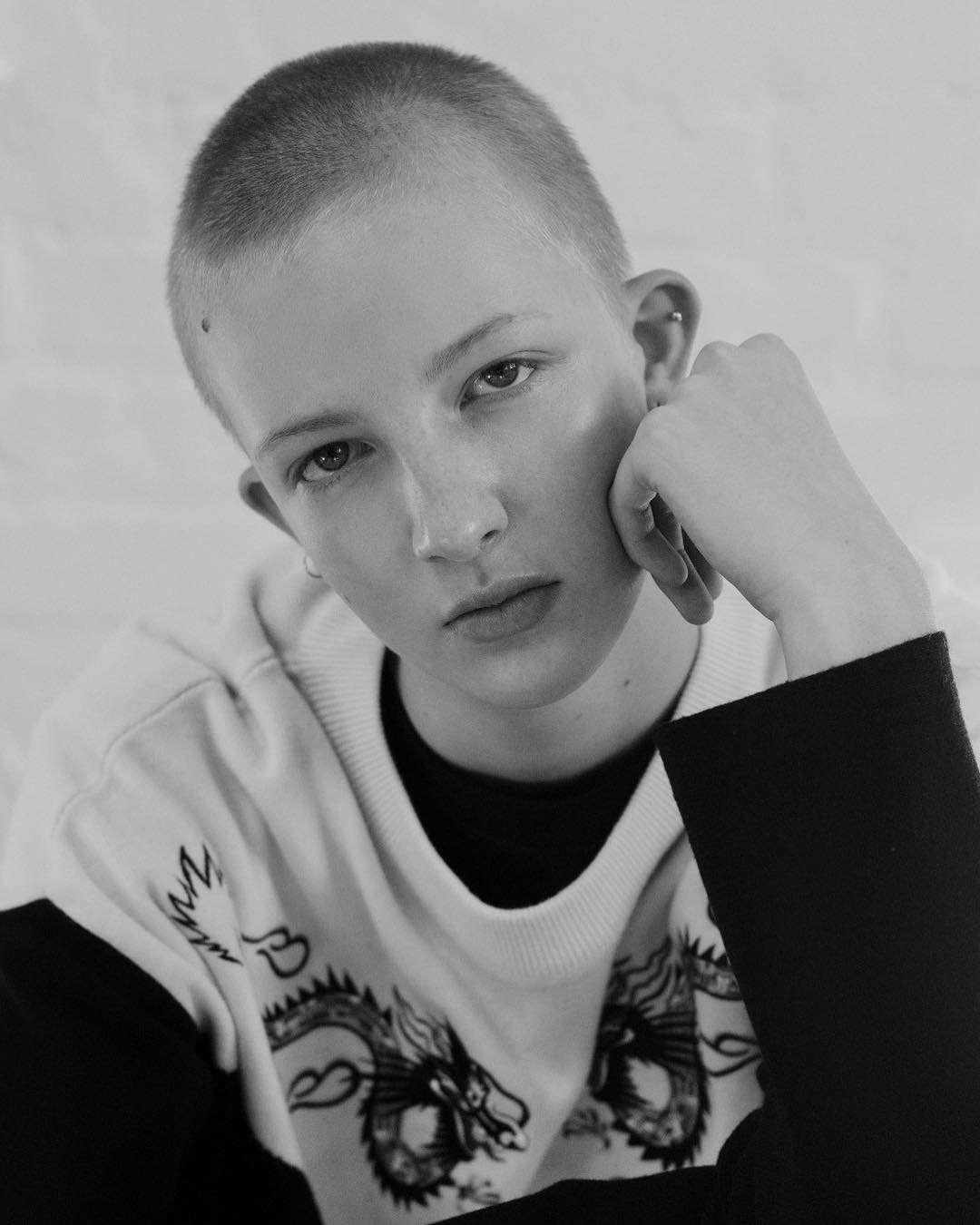 After a stellar debut at Miu Miu last year Finn Buchanan, with his now-signature blonde buzzcut grown out into a hot-pink mohawk, made history as the first openly trans man to walk a Celine show. Since then, the British teen has caught the attention of Nick Knight, John Galliano, Harley Weir, and Marc Jacobs all drawn to his limitation-breaking personage and boyishly aloof persona. After coming into Models.com offices, we started off discussing New York’s sweltering summer heat and then dove right into a conversation on his success so far, staying grounded, and gender explanation fatigue – here’s what Finn left us with.

Let’s revisit your past. Do you remember your first show & how you felt? What were you thinking the moment you walked out from behind the curtain?
My first major show was Miu Miu and it was intense in the best way possible. I mean I even hid in the bathroom for about half an hour because Miuccia Prada and Naomi Campbell were there and I needed a moment to take it all in. Truthfully, when I walked from behind the curtain onto the runway my mind just went blank and there, I was walking with this suitcase in one hand and all I could think was “I’m going to hit people with this” and I did. I was also thinking to myself “don’t look down, don’t look down” because you don’t want your photos to be off for the photographers. It was “Don’t fuck up”, but there are endless things you can do to fuck up and that’s the difficult part about it.

How’d you feel afterward? Did you cry or were you just in total disbelief of what you had just accomplished?
Neither! After the finale, we all went backstage and everyone was so nonchalant about what had just taken place. Maybe it wasn’t anyone else’s first big show but they were acting as if it was no big deal like we had just gone to the store or something extremely regular. There was so much casualness to the rest of the models and in my head, I was like “okay I guess this isn’t a big deal”. I played it cool, grabbed some pizza and ended up going to the Eiffel Tower.

In your other interviews, you spoke of your life in the circus, your thoughts on sustainability practices and not wanting to continuously be questioned about your gender or lifestyle. So, what are somethings you haven’t been asked that you’d like people to know about you?
I don’t know if there’s anything specific I want people to know about me anymore. I do know people have this really weird misconception that if I wear womenswear on a job that I’m gender fluid or whatever. There’s more to a trans model than being trans and being a model. There’s a fine line though. People have gotten personal and have made their questions more specific to me and that makes me a little uneasy. Simply because I don’t owe you much about my personal life and what goes on but since I did come out you have people digging and dissecting everything I do, wear or post.

There’s the conversation of age limits when it comes to modeling. Not being able to hire them until they turn 18 because at one-point models were being scouted at 14 years old. Labor laws aside, if children can become actors at such a young age, why can’t they model?
In defense of child actors when the character calls for a child you need someone to play them and obviously, you need a child to fill that role. When it comes to modeling, I wish I would’ve been scouted at a later age. Not that I’m ungrateful for the opportunities and everything I’ve experienced but I don’t know what it is that I want to do anymore. I use to want to be a doctor but today I couldn’t tell what I want to be anymore because I’ve been validated at being good as a model. Modeling doesn’t last forever for everyone so it’d be quite interesting to go back and say no to the scout who approached me that day and further explore my teenage life and then if I decided modeling is what I wanted to do then I would.

Who do you look up to in the industry? You’ve already worked with some very notable models. Is there anyone’s career that you appreciate or want to mirror?
Adwoa Aboah, everyone says her but she bangs! I’m also really into tiny designers; they’re out here hustling and pouring their heart into their dreams and I appreciate that because everyone can’t become a legacy house or brand. To see the drive these young designers possess is inspiring.

What have you found the be the toughest part of being an in-demand model?
The schedule honestly! There’s never really time to just relax. The jet-lag is serious and sometimes you leave one job, hop on a plane for 6 hours, and head right to the next job. I’m not complaining it’s a blessing to do what I do but it does get tiresome.

Is there any piece of advice that’s been given to you that sticks with you every time you’re at a shoot, a casting or when you book a job?
Someone told me recently that the fashion industry can be played like a game. I take that to work with me and to castings because it’s so easy to take things personally in this industry. For example, if you get dropped from a show or maybe someone your friends with doesn’t book you it’s very easy to take that personal and think “maybe they don’t like me or maybe I did something wrong”. I think it’s a lot easier to do well in the industry if you look at the big picture and see that everyone is just trying to make their vision happen and sometimes friendships don’t come into play when there’s a whole team trying to create art.

Walking runways, traveling the globe, appearing in the pages of magazines – with all that spotlight and attention what keeps you grounded? What brings you back to Finn before the scout approached you that day?
Friends! Them telling me “I ain’t shit” will do it every time. Also, them checking up on me, knowing that when all of this is over, I have to go back home no matter where home might be at that moment. People calling me after a long flight making sure I made it okay. My friend uptown always checks on me when he knows I’m coming to the city just to make sure everything is going okay while I’m here. That keeps me grounded because it’s real.

Your face and your presence are being seen around the world and you’re that representation that thousands of people both young and old have been yearning for. How does that make you feel? Was there ever a time you were searching for the person you are to so many people today?
I never really looked for role models or related very strongly to other people’s role models before or even after I was scouted. I think the closest I’ve ever come to having a sort of awakening was drag. There’s a little bit of pressure to keep going with activism and to answer every message of someone asking me for advice and it does feel good to see what I’m trying to do be received well. As validating as it is to see yourself represented in the media, there’s another level of satisfaction in being the first. Being the first of your kind to do something and I think it’s cool that people find motivation in that and hope to one day do what they see someone else doing.

Lastly, I know it may be hard to give advice when you are new to the industry but when people reach out to you via Instagram or maybe they see you in person. What advice do you offer to them? Especially those who are looking to follow in your footsteps?
My advice to people who are scared or don’t think that they could succeed because no one like them has ever done it before is to just try. The worst that could happen is that you have to try again. There’s nothing wrong with following in my footsteps, but making your own footsteps is so much more gratifying. Milan Fashion Week, Demna exits Vetements and more of the news you missed
NEXT See what the models are wearing off-duty in Milan! Days 3&4