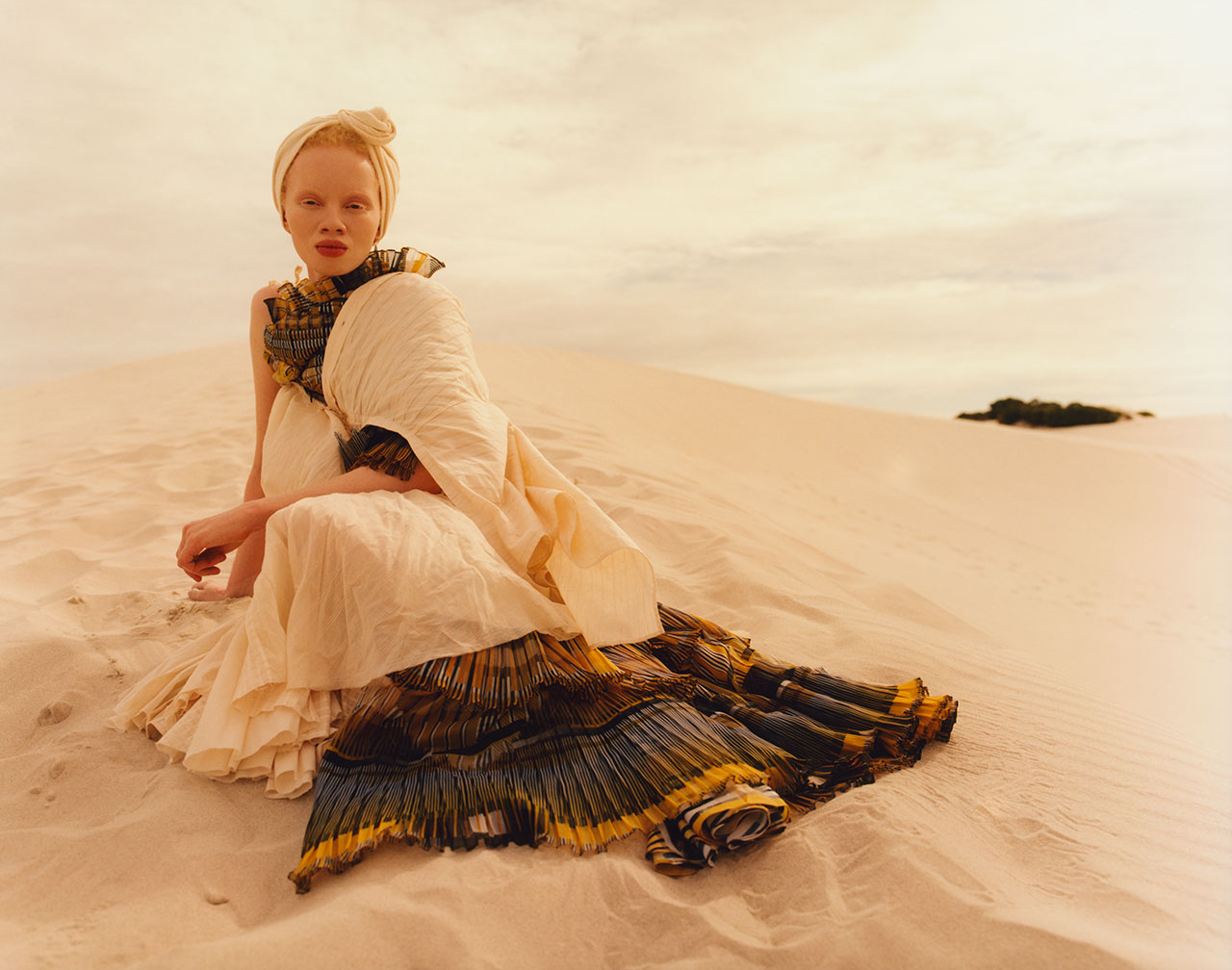 Model Thando Hopa is used to rising above life’s challenges. Born with albinism, Hopa has had to fight against traumatic misconceptions of her skin since childhood and the limits that others have ascribed to her. Through her accomplishments, the prosecutor turned model has more than proven that what makes her different stands as an asset in building a lucrative career. Just don’t attribute her success to good fortune – she’s been determined to make the impossible possible since she got scouted. Fresh off a historic Vogue cover we talked to the activist about her monumental milestones, the difference between diversity and inclusion, and the responsibility she has to move the narrative of albinism beyond stereotypes.

How long have you been modeling and how did you first get discovered?
I have been modeling for 7 years, however, for the first 4 years, I seldom worked as a model. I attained a bachelor of laws at the University of the Witwatersrand and then became a prosecutor and worked for the National Prosecuting Authority. The year I began working, I was scouted as a model at 23 years old. I was reluctant at first but after some convincing from my sister, it became important to create an alternative, positive narrative about being different. I juggled two careers for four years and in that time, I worked on projects that helped create social awareness and consciousness. Then, I took a sabbatical from the law in 2016 to explore my interest in the arts.

What are some of the defining career moments for you?
I think being on the 2018 Pirelli Calendar that was shot by Tim Walker was career-defining for me. The theme was Alice in Wonderland and it was the first time the story had been represented through people of color. The experience reminded me that the media influences how we see ourselves. When I collaborated with Tim Walker and Pirelli, the aim for me was to put forward narratives that move beyond stereotypes and rather place narratives that delve into the realm of possibilities and dreams. This is important to me because the coming generation should be able to experience a better world than we do, a world that is accepting and embracing of human diversity, a world that doesn’t impose limitations based on how someone looks. We never just carry ourselves on these platforms, we carry millions of people and with this privilege comes a responsibility to try and build stronger and more positive narratives to curb the negative ones that create social barriers. I was given the opportunity to write for the calendar and voice out my own interpretation and my own truths. This was one of my favorite projects. 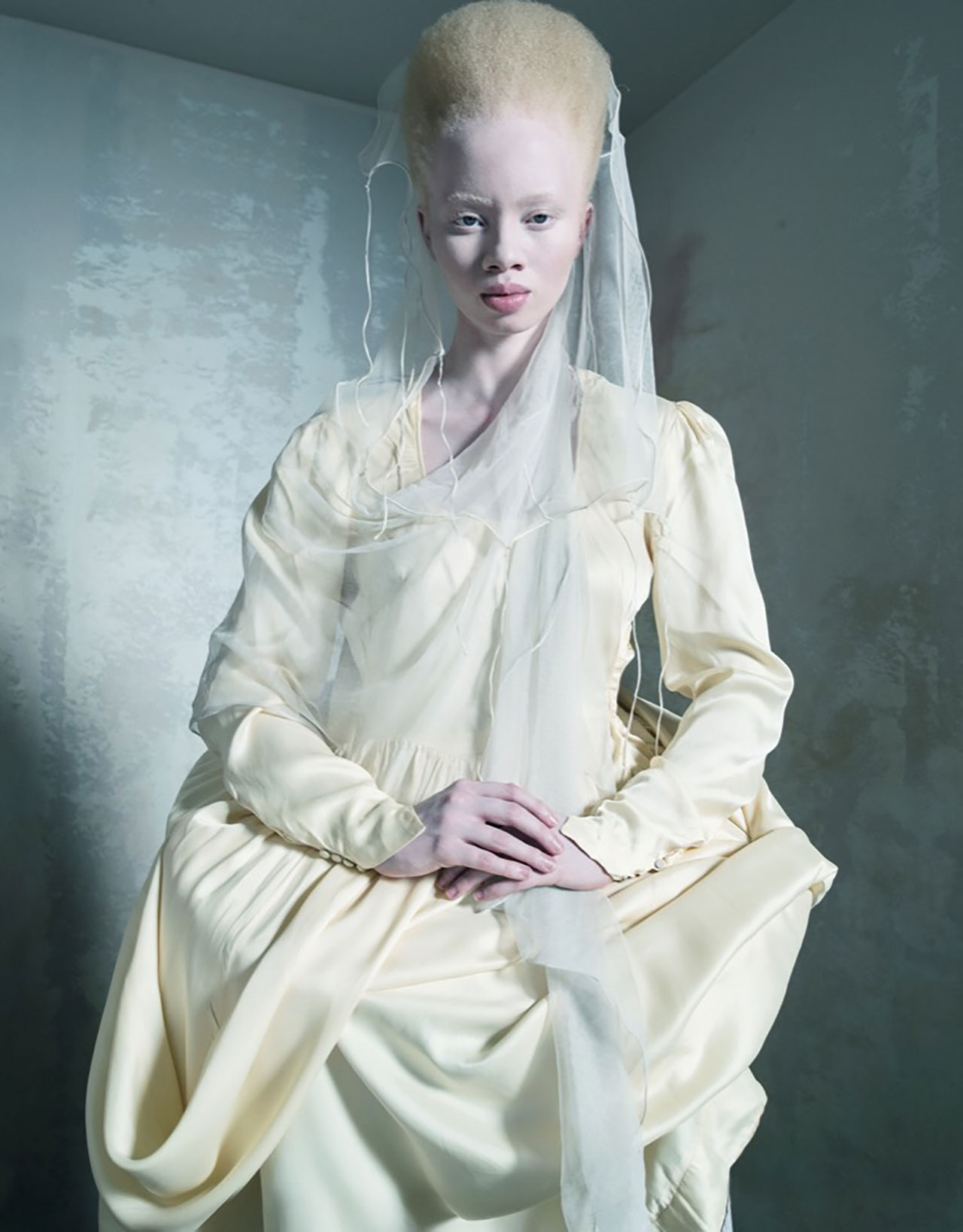 How would you say the industry has changed for better or for worse in terms of inclusion?
I think the industry can get better in terms of inclusion. I think the industry focuses less on inclusion and more on diversity. Diversity does manage to achieve a symbolic distribution of images as it deals with differences of race, body shape, otherly-ableness, etc. Diversity is a separate inquiry from inclusion. Inclusion goes into more complex questions. How are models of color treated, how are they paid, how are they represented, do they have some control over their stories, are contracts drafted in a manner that aims to exploit, disempower and strip the more vulnerable party of their agency? All these factors deal with bargaining power and require institutions to relook at how they’re structurally and systematically being exclusionary or oppressive. Inclusion deals with confronting attitudinal, structural and systematic barriers and oppression in a manner that pursues equality. Diversity without inclusion results in tokenism and is a disingenuous display of equality.

“Diversity is a separate inquiry from inclusion. Inclusion goes into more complex questions. How are models of color treated, how are they paid, how are they represented, do they have some control over their stories and representation, are contracts drafted in a manner that aims to exploit, disempower and strip the more vulnerable party off their agency?”

As someone who is part of many marginalized groups, how has your experience been living and working in South Africa?
My experiences are varied, contextual and situational. At home, I was treated with warmth, love, and adoration. During my early development, society’s narratives about my body hadn’t really kicked in yet. I was not black, not rich or poor and I didn’t have albinism, I was just Thando. However, as I interacted with my community, I began to discover that we have loaded bodies. On my first day of school, my peers approached me with suspicion, hostility, and otherness. I learned through my body, that there is a behavioral defect in how we approach difference. That the color and shape of our bodies assign social consequences. I realized the impact of this when I worked in the media fraternity too. On a practical level, I’m short-sighted and this requires me to find creative methods on how to navigate my spaces. Being outside on a sunny day only feels pleasant for a short amount of time because I’m conscious of sun damage, which makes outside shoots quite challenging because my eyes are sensitive to light. In all this though, I find my own way of navigating life in my space and for the most part, cherish South African life – with all its complications.

What would you say are the biggest misconceptions about living with albinism?
There are many misconceptions but I will name a few I know I find to be prominent and a real problem:
That albinism only occurs amongst black people
Albinism is a race
Albinism is a disease
People with albinism are a curse or bring luck.
That the whole African continent has a violent reaction to people with albinism (certain countries and certain provinces are in a crisis when it comes to massive human rights violations of persons with albinism. However, the continent is as varied and as complex as any other, each context has its own dynamics)
That people with albinism have an other-worldly aesthetic
People with albinism automatically cannot thrive in mainstream schools or employment environments. (It’s a case by case inquiry, it’s not a homogeneous conclusion, I, for instance, went to mainstream schools my whole life).

Do you think that having albinism encouraged your role as an activist?
Definitely, my skin is loaded with societal misconceptions but it enveloped me in a uniqueness that helped me discover my own voice in a world that I struggled to understand and that struggled to understand me. It made me question power dynamics, it helped me understand intersectionality and it made me discover the complexity of identity and body politics. The experiences that I attracted because of my body, made me seek a template of equality and I started looking for ways to negotiate that equality and media became one of those platforms. 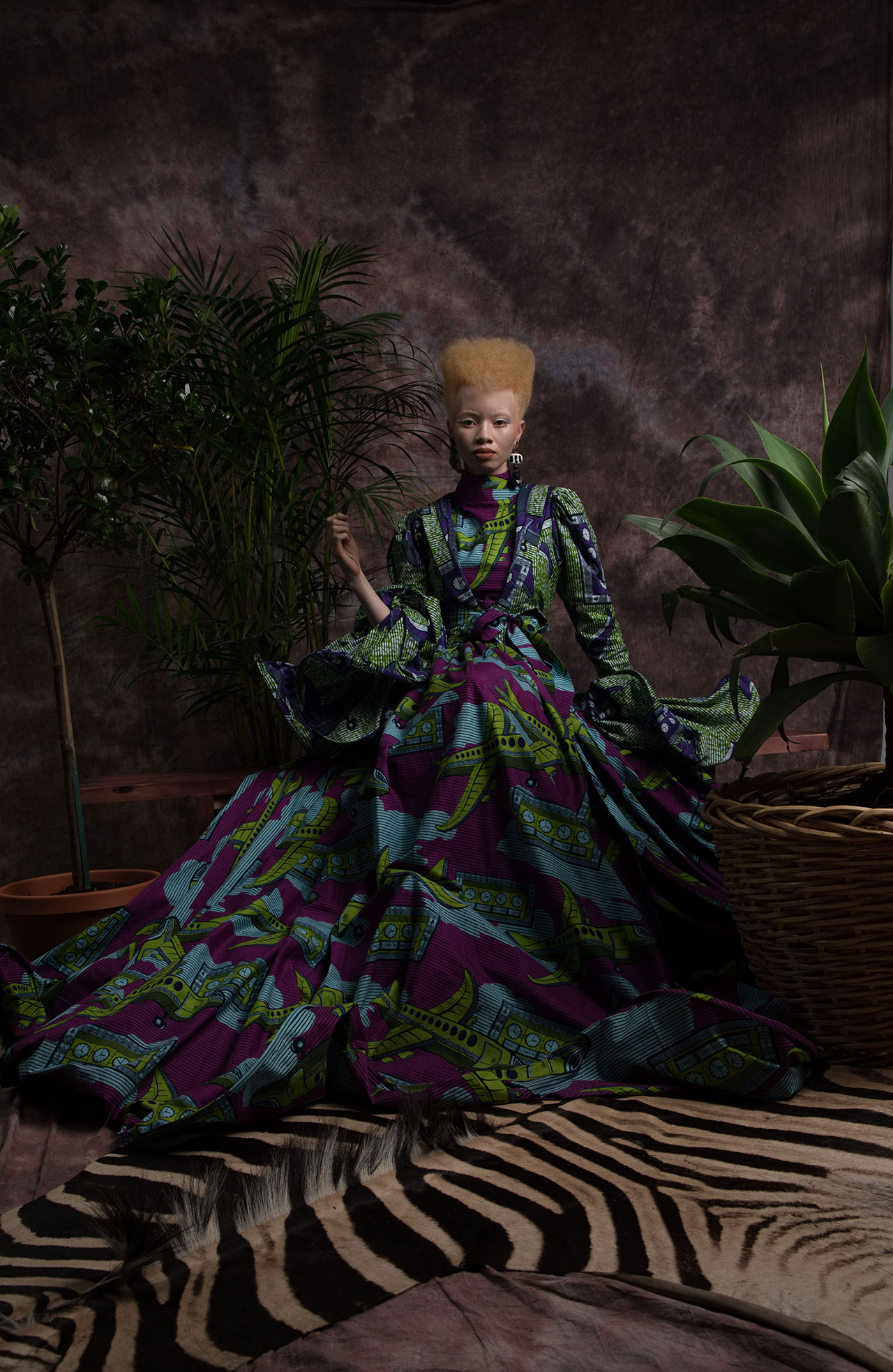 Tell us about your recent cover of Vogue Portugal – how was the barrier-breaking experience ultimately?
Initially, me being on a Vogue cover seemed too much of a far-fetched idea and my mind protected itself by not even imagining the possibility of it. A woman with albinism had not been represented on a Vogue cover and also, I live in South Africa which brings another inaccessibility to certain platforms. This was a lesson for me, that our uniqueness and authenticity are a form of currency and we can navigate any part of the world when we allow ourselves to be seen. To a point where even dreams we never knew we had become true. I have to admit that I felt a sense of progress because it always dawns on me how in many platforms that inform our popular culture, minority groups fall through the cracks when it comes to representation. So whenever there’s a breakthrough made by one single person, it might not break the barrier when it comes to our collective social mobility but it certainly does alleviate it a little.

“…our uniqueness and authenticity are a form of currency and we can navigate any part of the world when we allow ourselves to be seen. To a point where even dreams we never knew we had become true.”

Social media has been touted as an important tool for the current generation of new models, how do you make it work for you?
One of the interesting by-products of social media is that it allowed the democratization of beauty, it’s a form of media that is finding ways to ensure that the image of beauty is no longer monopolized. From me, the biggest asset social media has given me is the ability to have full control over my image, my story, and my overall representation. A lot of the times, I felt misunderstood, stereotyped or misrepresented by publications, however, social media opened up an avenue where my story was authored by me on my own terms. It also gave me an opportunity to write and package my thoughts in a way where I could share them with the world.

Do you have any major goals for your career in the future?
My major goal is to get better at building the resilience of living a purposeful life. My projects need to focus on representation that is inclusive, diversity and progressive narratives, I go through this analysis with every project. I’ve turned down brands that are big because I felt that their values are in conflict with mine, but I was equally lucky to work with brands who had values and projects that aligned with me. Film is still one of my most unexplored mediums and I certainly still aim to use that medium to portray humanizing stories that live outside of the stereotypes. 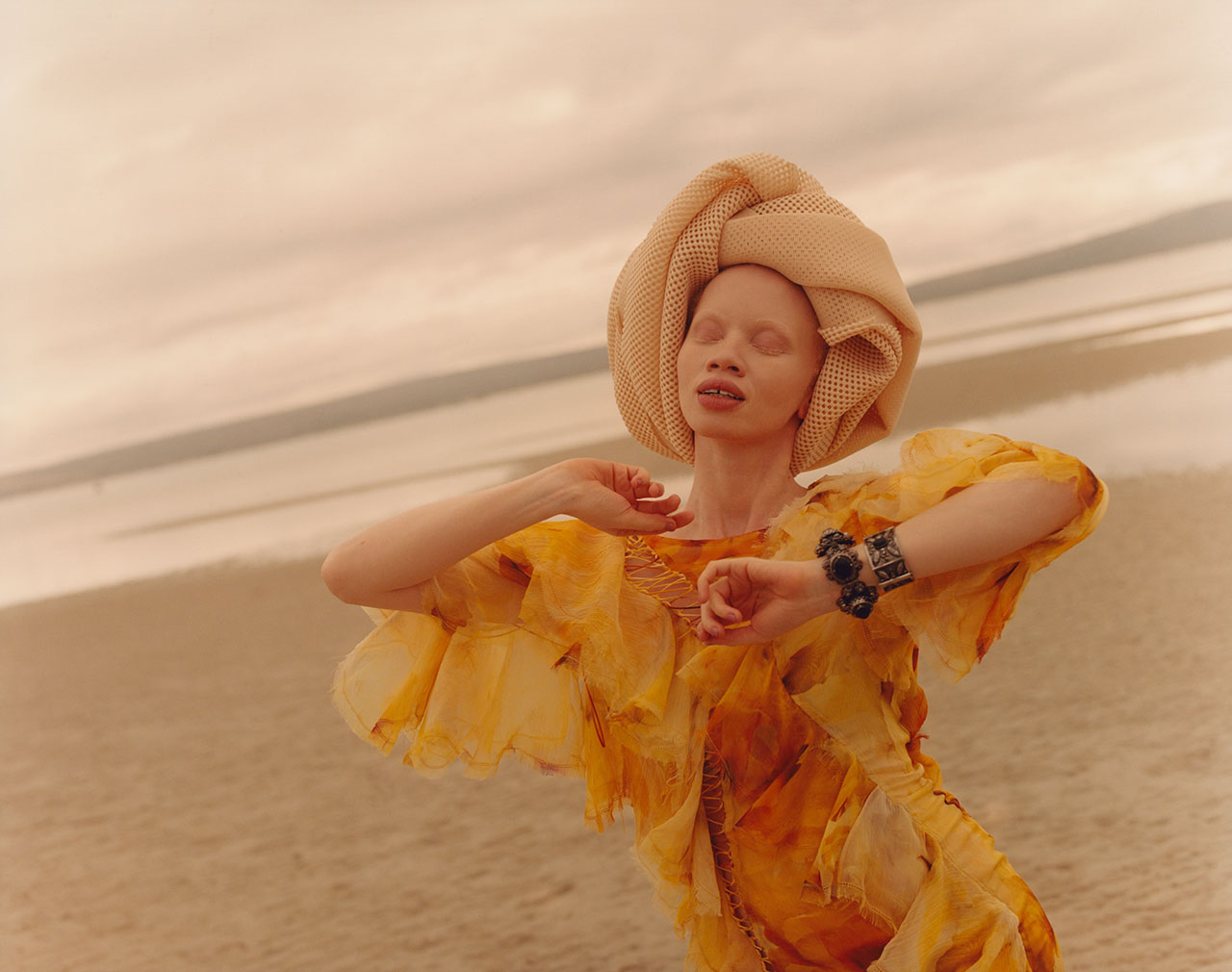 See what the models are wearing off-duty in Copenhagen! Days 1-3
NEXT