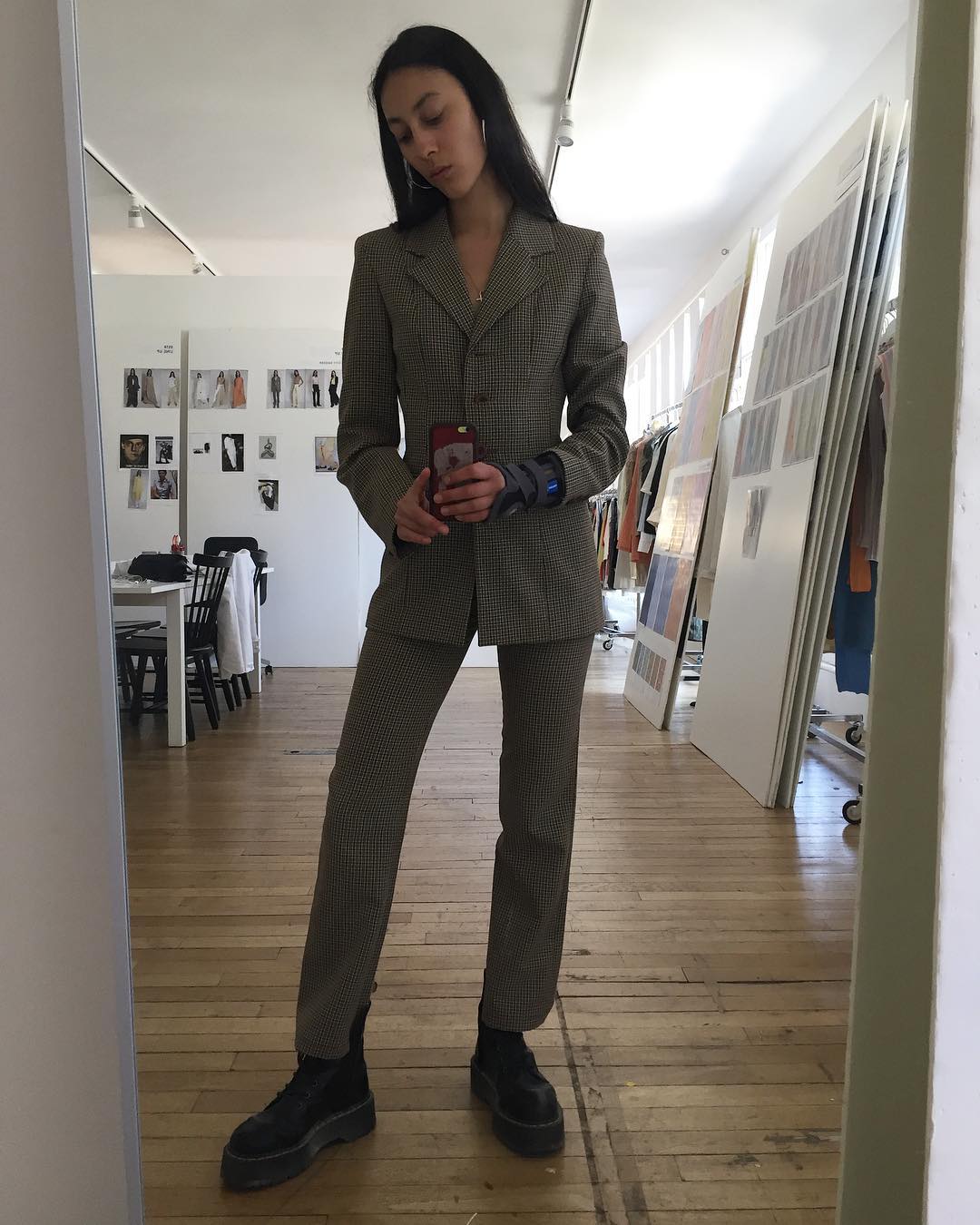 For a girl who comes from the “middle of nowhere,” as she describes her hometown of Montaigu, a region in western France, Gaïa Orgeas has certainly found herself smack in the right place. She was discovered in Bordeaux, where she was studying at the time. A friend recommended that a model agent, Olivier Lafrontière, take a closer look at the sulky tattooed brunette. “And here we are,” she adds. These past couple of days her 90s grunge realness has been striking chords with decidedly cool designers like Sies Marjan, Telfar and Zero + Maria Cornejo whose runways’ she appeared during her first New York show season.

That’s not all–when we met Orgeas during our Confirmed go-sees series, she was packed to jet to Los Angeles in the middle of castings to shoot a campaign (which we can’t mention here), and then fly back to New York. “That was very cool!” she writes to us from Canal Street, drinking coffee and listening to “Country Girl” by Boy Harsher. Gaïa, who could be straight out of The Face, describes her style as “easy, grunge, boyish, strong,” mentioning her staples like “denim, suits, white tanks, leather jackets and black clothes,” but the most important making of a good outfit she adds: “I am always trying to be myself”. She can’t help but list some of her favorite brands, footnotes included: Vivienne Westwood for the “punk’itude”, Alexander McQueen and Martin Maison Margiela “for me are the ones who wakes up my curiosity”, Y-3 “is about strictness and disintegration”, Gucci represent “my colorful thoughts”, she continues on like this–Yves Saint Laurent, Wang, Iris Van Harpen and more. Clearly fashion isn’t a cursory part of her program.

As NYFW wraps and she heads to the other cities, we ask Gaïa, whose Instagram handle is @Cheezylove, if there are any particular methods she applies to castings. “I am always positive, fact is, everyone deserves a place. I give the best out of me. But I know, since the first beginning I will not be typical a show girl,” she says prudently. Though, the latter is a sentiment which may change. She’s already done some shows in Europe, like Acne, and has four covers to her name like Another Magazine and Numero Homme Berlin–but Gaïa has been operating somewhat under the radar. We suspect, judging by her New York bookings, it may not be the case for much longer as she continues to earn her stripes, internationally, on covetable runways. See what the models are wearing off-duty during NYFW S/S 19! Pt.2
NEXT