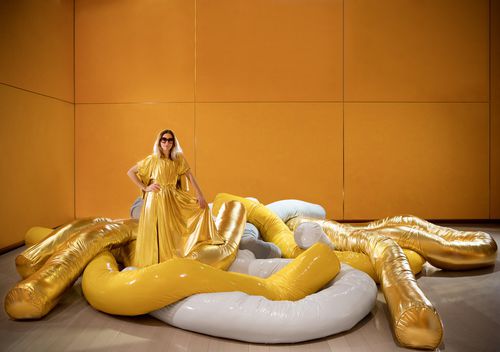 MOLLY FINDLAY is a set designer and prop stylist specializing in conceptual still life photography. Her work has regularly appeared in such publications as in Italian Vogue, The New York Times Magazine and Harper's Bazaar. Other clients include Rolex, Gucci, Tom Ford, and Estee Lauder. She started in the field as a fashion editorial assistant, then junior editor at Harper's Bazaar Magazine, where she produced shoots throughout the world for industry giants including Patrick Demarchelier, Hiro, Richard Burbridge, and many others, segueing eventually into sets and props.   Her current projects include designing an artist residency space on Gasparee Island, Trinidad in collaboration with Rome Prize Recipient in Architecture Thomas Tsang, developing a jewelry line, and organizing the design collective "Happy Place". She has also recently created an installation for TimesTalks Festival which featured Grace Jones and designed the interior of Bridget Tasting Room in Brooklyn, which has been recognized for its unconventionality and dedication to local agriculture and oenology.

Findlay grew up in California's Mojave Desert, Berkeley, and the Eastern Sierra Mountains. She has a Bachelor's degree in Fine Arts with an emphasis in sculpture and installation from the University of California at Santa Cruz. She also attended the Ecole des Beaux Arts in Toulouse, France. In 2003 Molly Findlay co-founded SFOTE, a UN sponsored non-profit dedicated to international aid work which has greatly engaged the art and fashion community. Findlay lives in New York with her husband Everard and daughter Isadora.