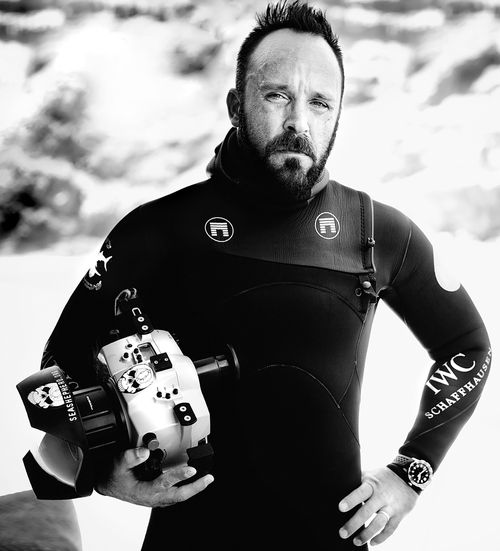 Photographer Michael Muller has packed several lifetimes worth of adventure into a mere four decades of life. Raised in Northern California, he spent much of his childhood in Saudi Arabia, where his father, an amateur photographer, oversaw the building of the port city of Jubail.

In his mid-teens and 50 countries later, he began taking photos of professional snowboarding, a passion that quickly became a profession. By 22, Muller had established himself as a leading entertainment and fashion photographer. His celebrity portraits of Joaquin Phoenix, Brad Pitt, Jeff Bridges, Robert Downey, Jr., Gwyneth Paltrow, Scarlett Johansson and hundreds of others have graced the pages and covers of magazines including Vanity Fair, Elle, Rolling Stone, Harper's Bazaar, Flaunt, Filter, Esquire, Interview, and the New York Times Magazine.

Noted for his close-up underwater shark photography, Michael has spent the last decade inventing and patenting a studio lighting system which he takes underwater to light the ocean life in ways never seen until now.

Two of Michael’s passions are adventure and charities. In January 2010 he joined a team of climbers including actors Emile Hirsch and Jessica Biel, as well as recording artists Santigold, Lupe Fiasco and Kenna on a trek to the peak of Mount Kilimanjaro. The goal of the high-profile expedition called Summit on the Summit was to raise awareness of clean water issues worldwide. A film crew from MTV produced a 90-minute documentary on the trip, and Michael documented it with photos that were later published in Outside magazine, among other numerous publications World Wide.