Model of the Week: Laura Hagested 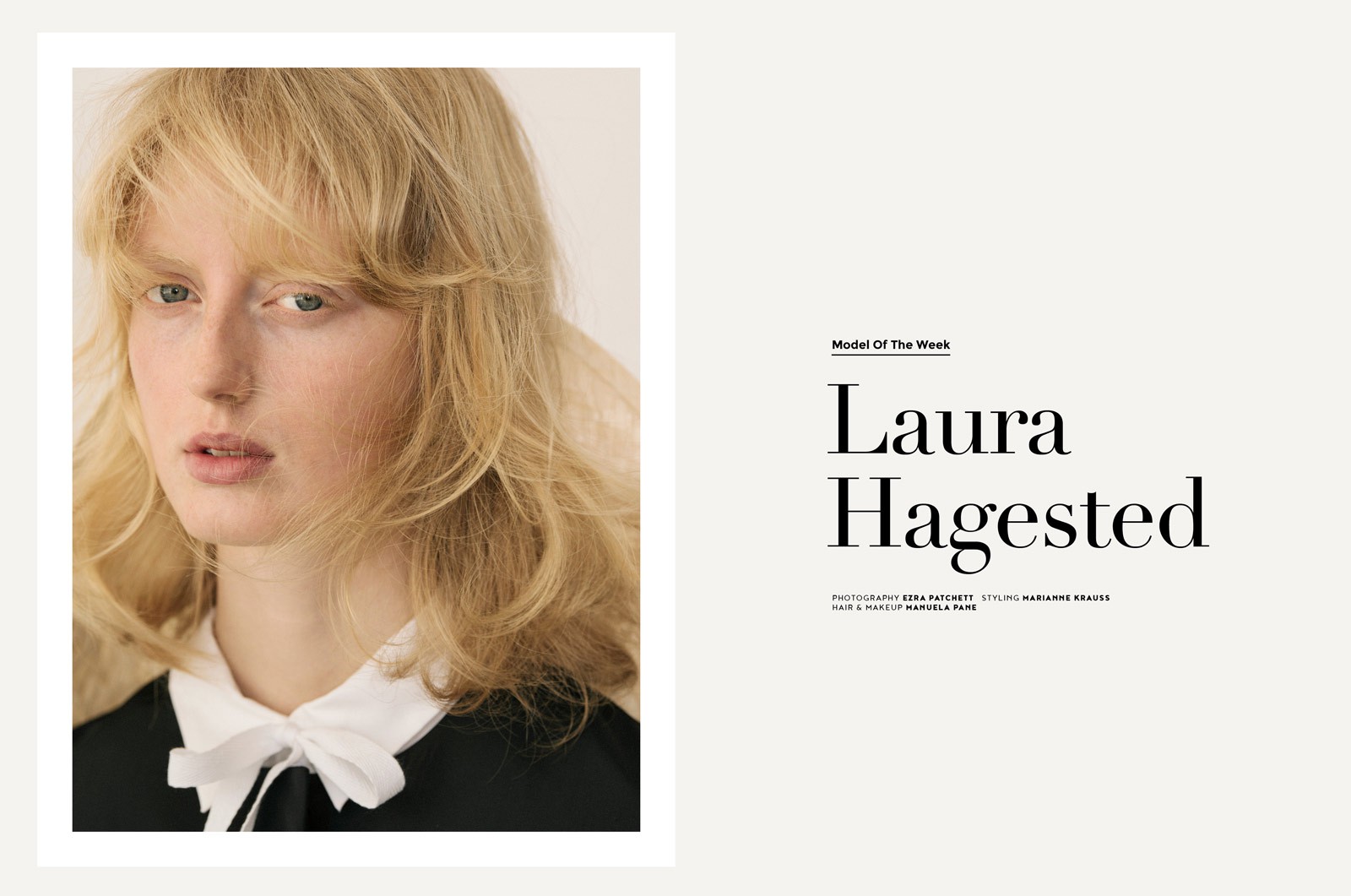 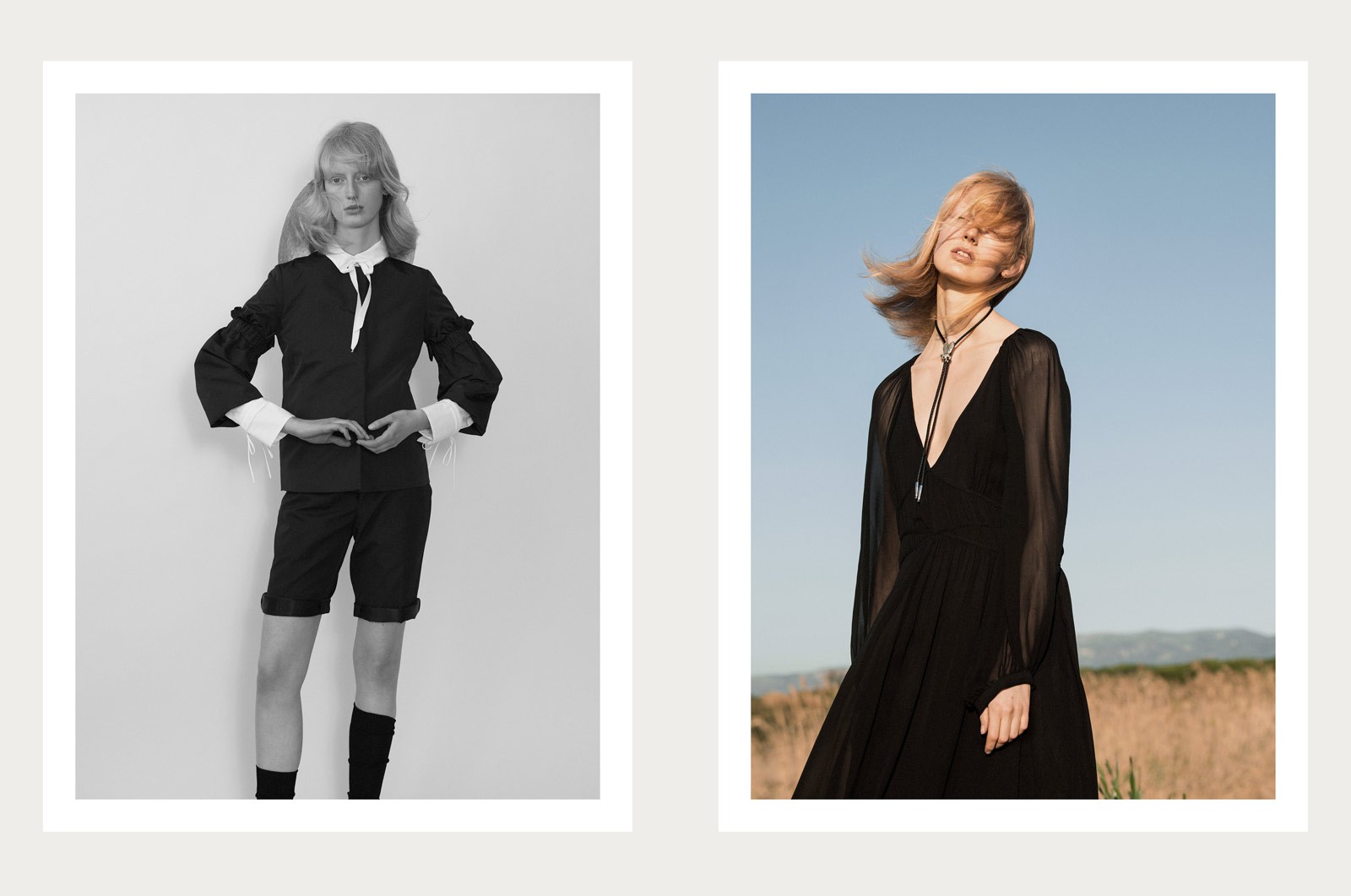 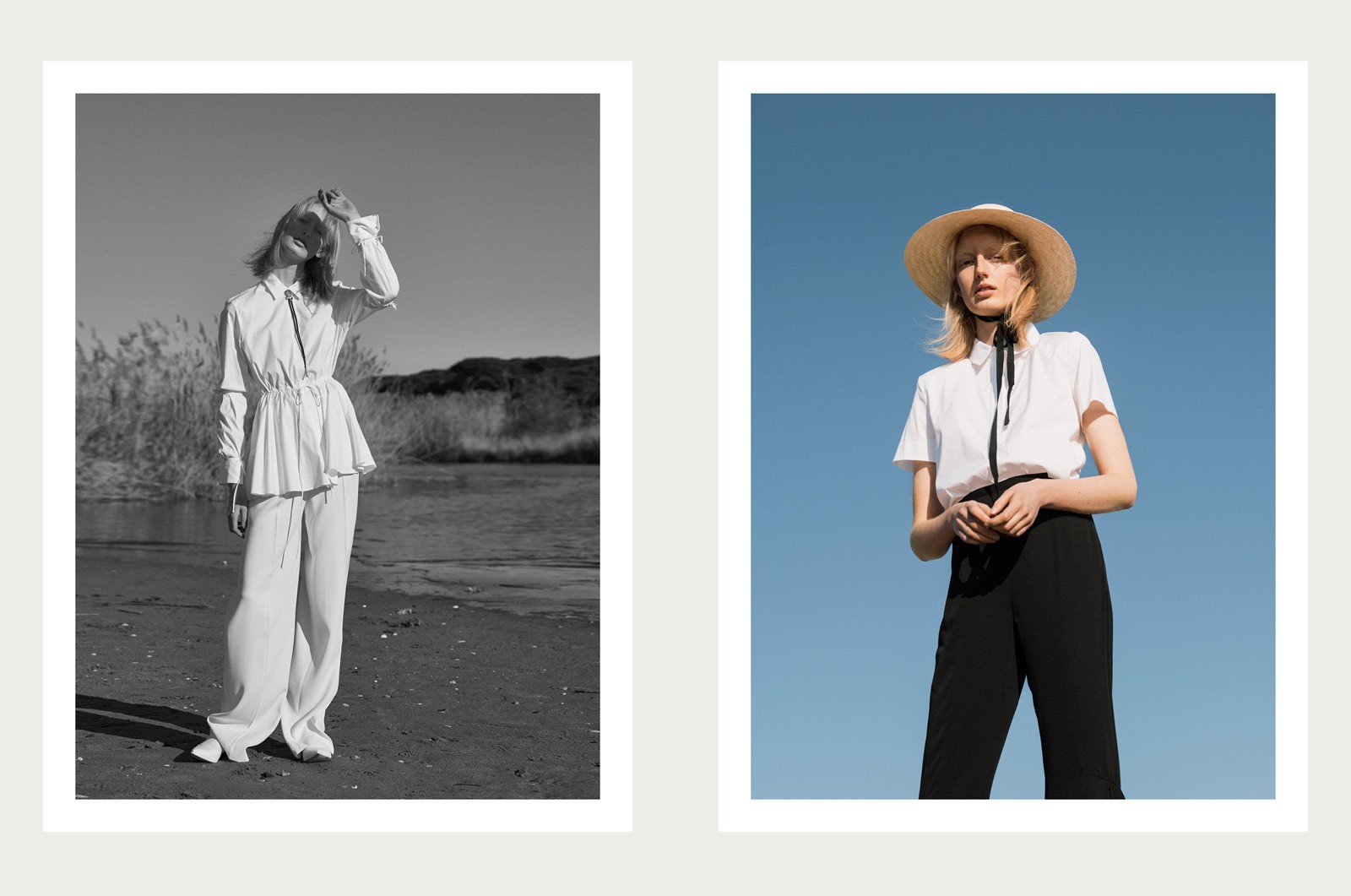 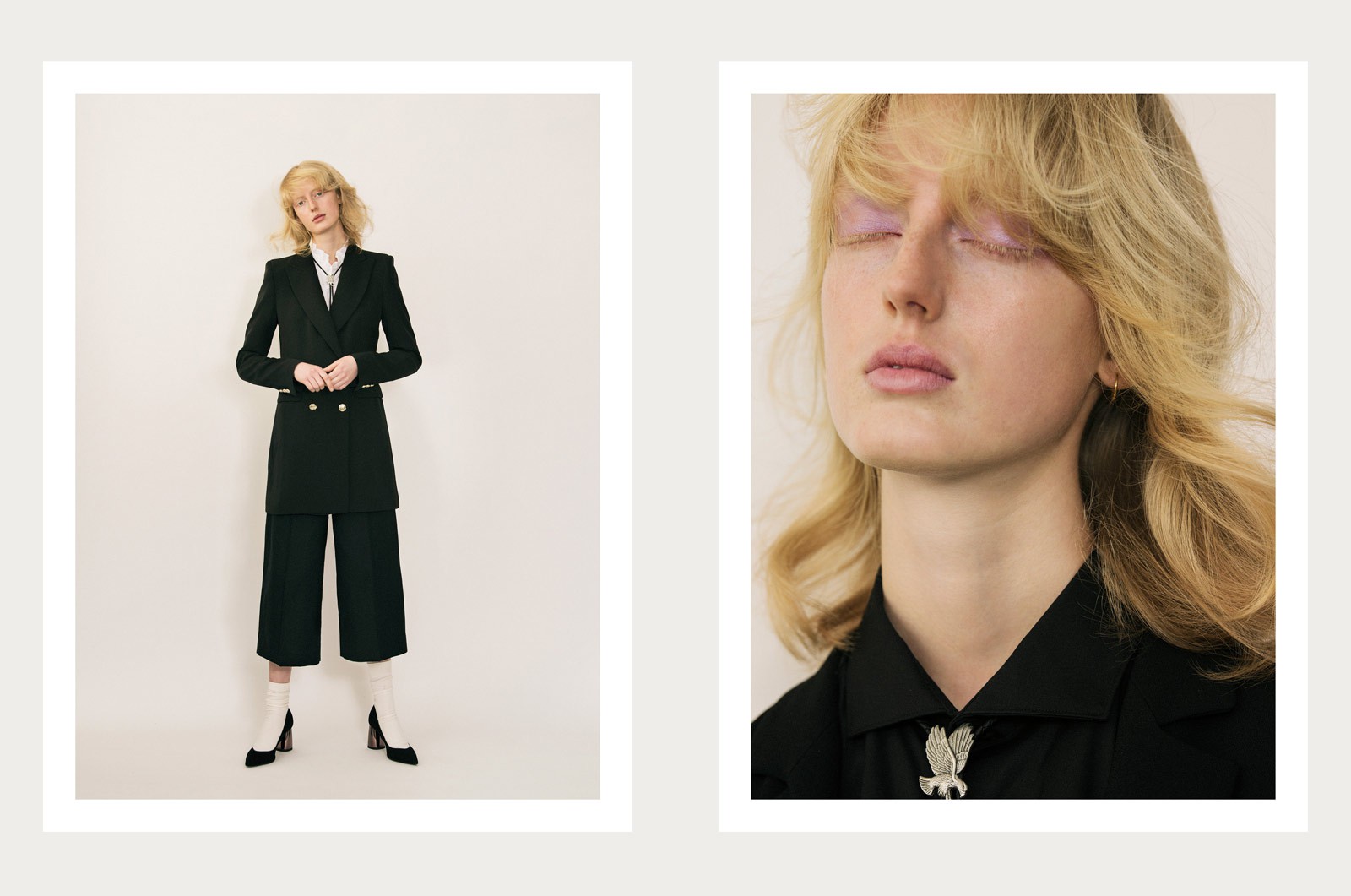 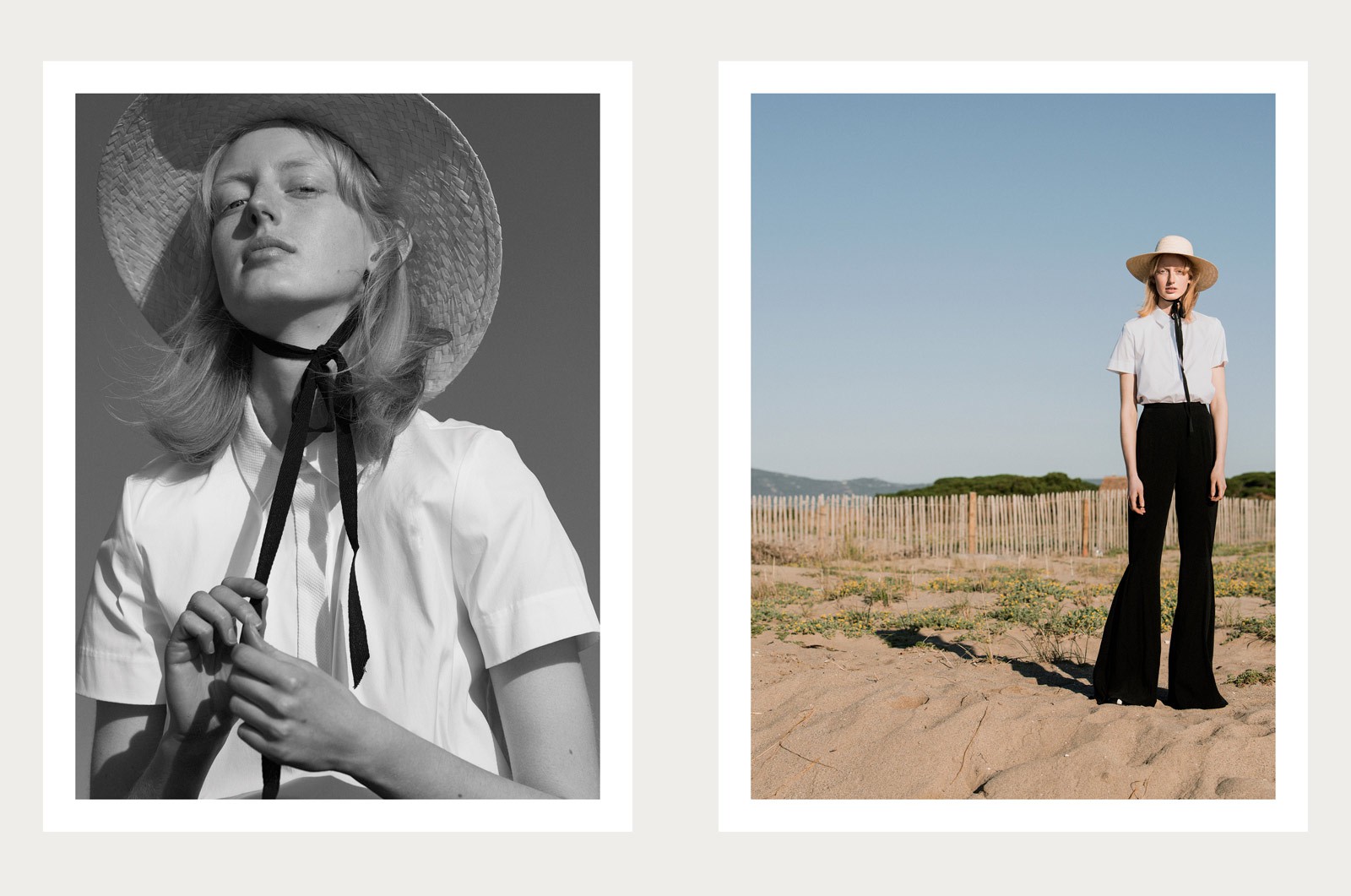 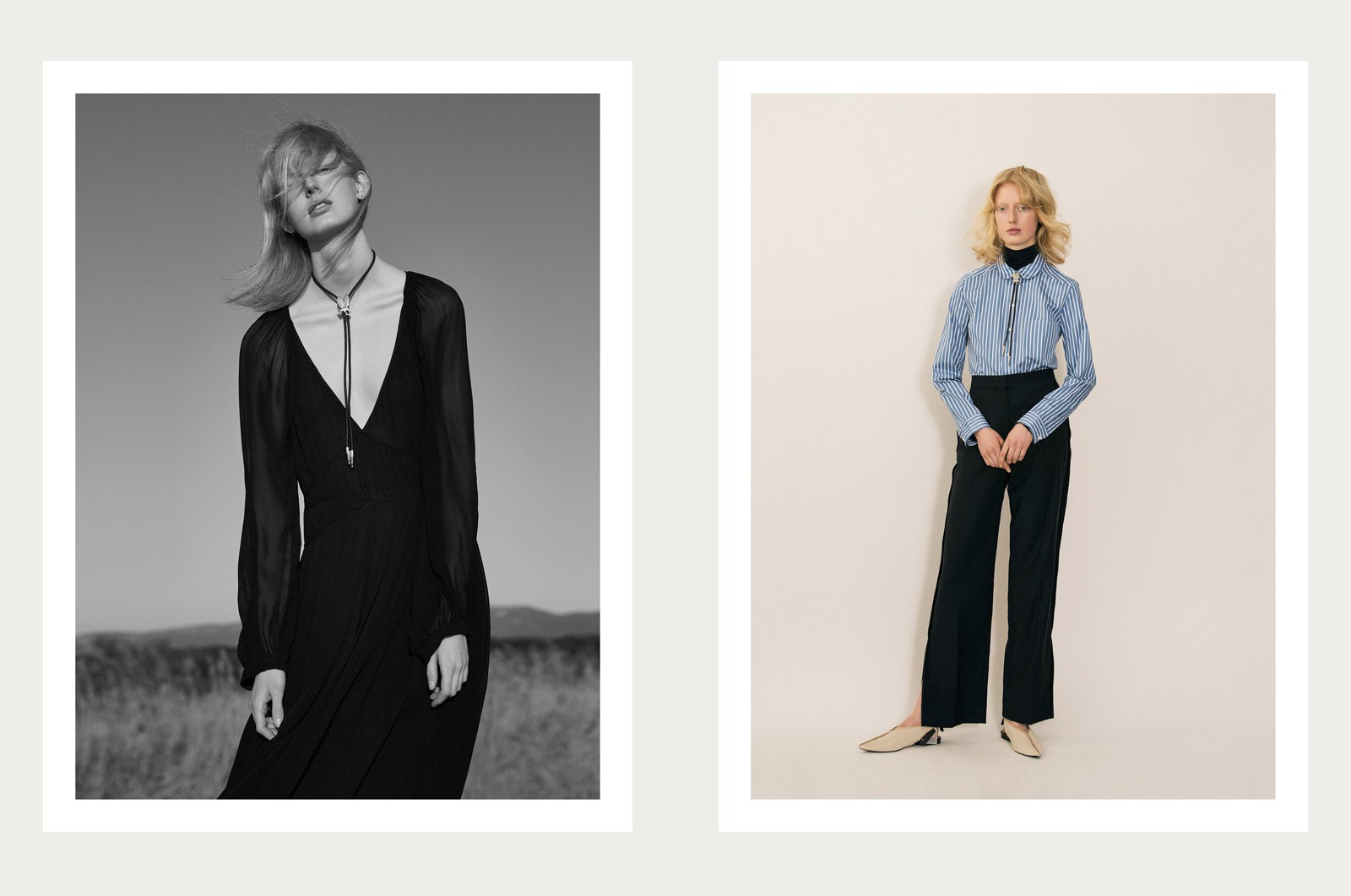 Laura was shot exclusively for MODELS.com by Ezra Patchett, with styling by Marianne Krauss, and hair and makeup by Manuela Pane at Kasteel Artist Management using Moroccan Oil and MAC. Special thanks to Carine Youb and Arnaud Daian.

How discovered:
Bente Lundquist from my mother agency, Scoop Models, approached me in a sneaker store in Copenhagen while I was buying a 3-pack of Nike tennis socks. Apparently she herself was searching for a pair of white sneakers, as far as I remember she ended up with a pair of Reebok Classics.

What was your first modeling job?
My first job was an editorial shoot, a Schiaparelli special, for SSAW magazine in Paris with Lea Colombo, Lotta Volkova and Paul Hameline who at that point was Lotta’s assistant doing some modelling on the side – at least that’s the impression I got. He joined me in front of the camera for a few pictures. I remember feeling horribly awkward about the whole situation on top of being a nerve wreck from travelling alone for the first time, and due to the no makeup-look you can actually tell by the colour of my cheeks in the pictures. Despite that fact those pictures are still some of my favourites I’ve had taken, all new vulnerable to the camera I look very much like myself.

Favorite things:
Producing things with my brain and hands is something I really enjoy and I always have several projects cooking, it being writing, painting, designing, photographing, drawing etc. In terms of objects, I still keep the teddy bear my granddad gave to me when I was one year old. It’s only a few years ago since I stopped bringing it around with me for jobs and when I did I’d always keep in in my cabin baggage in case my suitcase would get lost.

What are you listening to at the moment?
I recently discovered Antena, an 80’ies dream pop/bossa nova group which is kind of cool. Apart from that some of my current favourites are My Bloody Valentine, the new album from Kendrick Lamar, and Slowdive whom I look forward to seeing live on Roskilde Festival in Denmark this summer.

Favorite movie, tv show:
I don’t care too much about TV-shows really, the only ones I’ve watched lately are Twin Peaks (better late than never) and the Norwegian show ‘SKAM’. My all time favourite series is the old version of Sherlock Holmes with Jeremy Brett from the 80’ies and 90’ies, but I’ve watched all the episodes several times, so who murdered who is sadly no longer a surprise. Movie-wise I love Wes Anderson, Pedro Almodovar and Alfred Hitchcock.

Favorite designer, fragrance or beauty product:
Obviously I adore what Alessandro Michele is doing at Gucci and every job I’ve done with them has been a very inspiring experience. The Norwegian designer Bror August is another favourite, the hand painted clothes are great and so is the visual universe surrounding the brand – the Instagram pictures (@broraugust), the models, the campaigns shot by Benjamin Barron and Jakob Landvik. My own wardrobe, though, is a different story (still waiting for my Gucci sponsorship), so this summer you’ll se me wearing my usual mix of Acne Studios and men’s skatewear together with styles from the Danish brand SAKS POTTS (@sakspotts) for whom I did the print design for the upcoming season. My signature fragrance is some unknown oil perfume my parents brought home from Egypt one time. It’s the best I’ve ever smelled. Beauty-wise I’m lucky enough to have been granted with a very problem-free skin, so I do nothing but cleanse it and pop on some moisturizer every once in a while, and during summer I apply sunscreen as well to keep the lobster-look on a distance. Makeup I save for festive occasions, and by makeup I mean concealer and bronzer, so unfortunately I have no beauty secrets to reveal.

What were you doing before modeling?
Modelling for me began at the same time as my last year in high school and pleasantly replaced my hours of cleaning offices on Sunday afternoon as source of pocket money.

What would you be doing if you weren’t modeling?
If I had not been modelling during my gap years after high school I would probably have had some dull full time job in a kindergarten or so, so I feel very lucky to have had this opportunity. After modelling I hope to attend a creative school of some sort, I’m dreaming of making a living on that love for creating I mentioned earlier.

What’s something uncool that you love anyway?
Watching an episode of that Sherlock Holmes series before going to bed at 10 pm. Yes, I’m 20.

Favorite modeling experience so far?
I can’t really mention one particular job, but looking back at having worked with photographers like Mert and Marcus, Tim Walker, Harley Weir, Coco Capitan, Norbert Schoerner, Viviane Sassen, Olivier Zahm and Glen Luchford makes me proud. That said I recently came home from a week of work in Los Angeles which might take the prize since I completely fell in love with the place. If only I could have brought home the light from over there – it’s the most beautiful thing.

What’s the best thing about your hometown/country?
The more I’ve been travelling and talking to different people from around the world, the more I cherish the Danish welfare system with its extensive health care and free education. It’s something that should not be taken for granted and unfortunately severe cut downs have been made lately, but still I feel very lucky to live in a country like Denmark.

Which brand would you really love to model for?
Like probably every other model I’d love to do a Céline campaign.

Place you would love to visit:
Since I came back from Los Angeles a few weeks ago I’ve been wanting to go back very badly, but if I have to choose a yet unexperienced destination I’d love to spend a week or two in a cottage in the South of France together with baguette, cheese, wine and friends.

Currently you’re obsessed with/about:
A project I’m doing with a friend at the moment – for five weeks we have some sort of creative task every day, for instance yesterday each of us had to make a record of us talking to ourselves. Having to come up with a new idea for some sort of artistic product every day gets my brain going in a way I really enjoy.

What’s the best piece of advice you’ve ever been given?
When I’m not feeling well one of my best friends always reminds me that my most important task is to be happy. It’s very simple, however I tend to forget it.