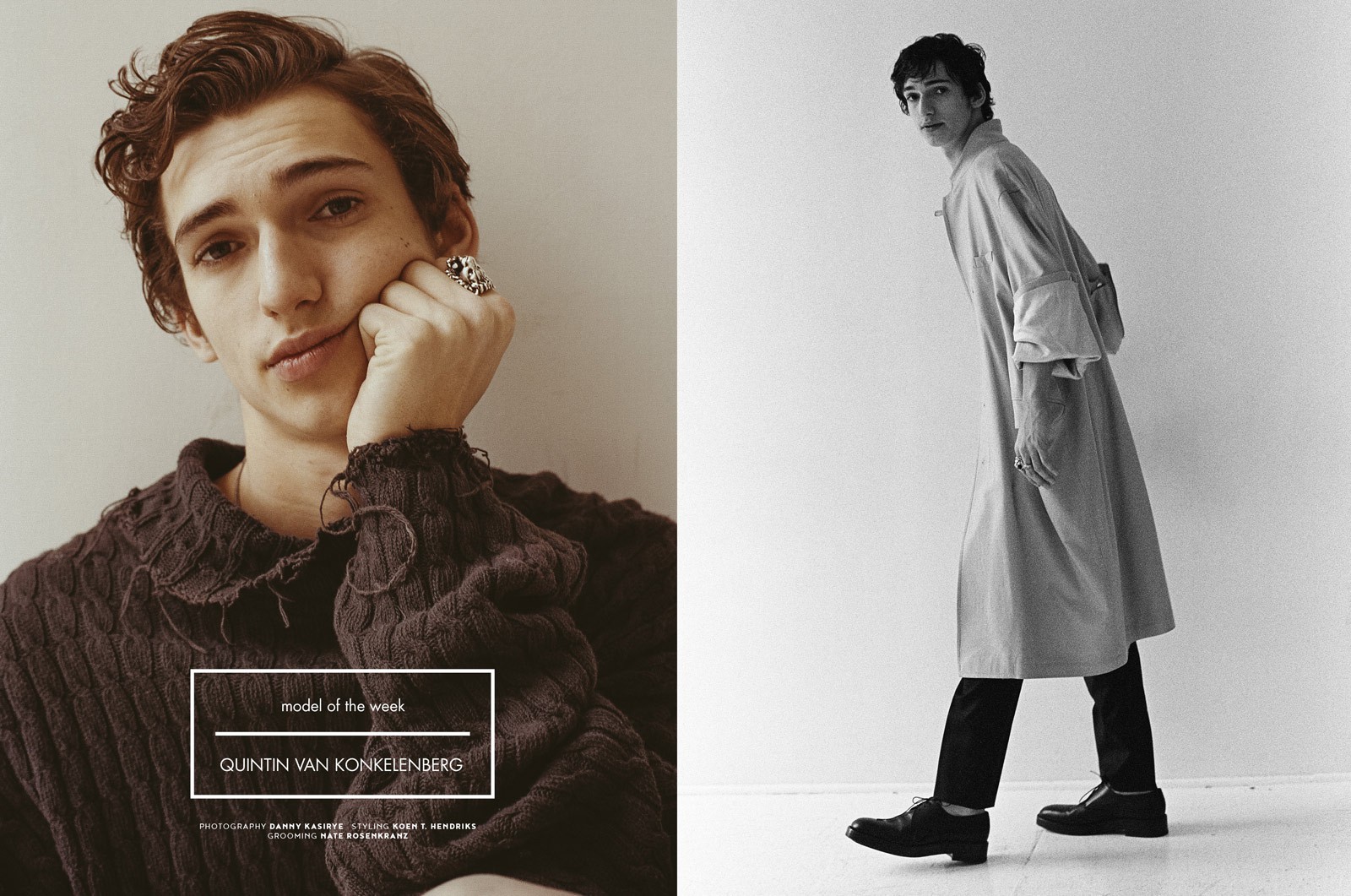 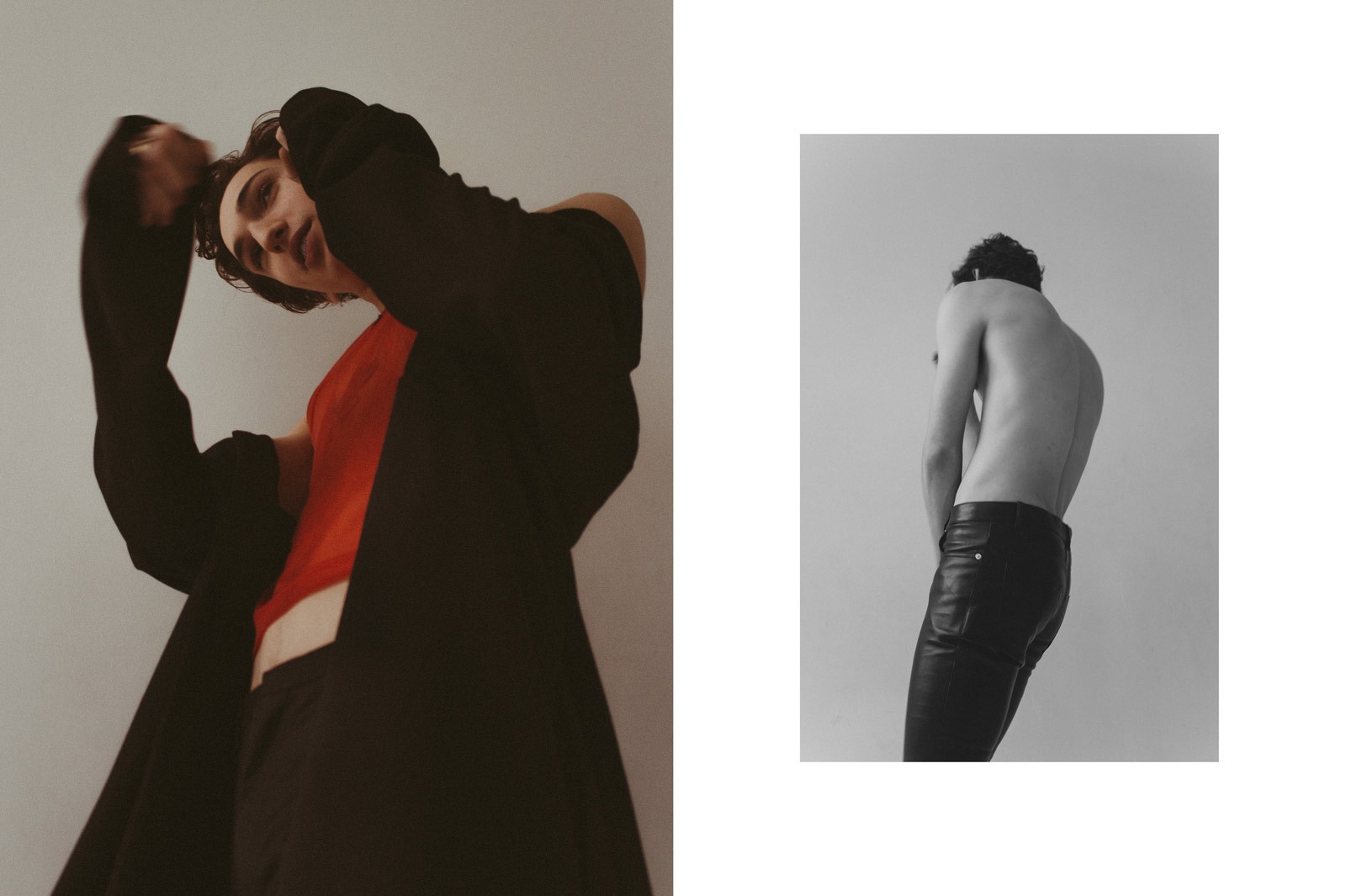 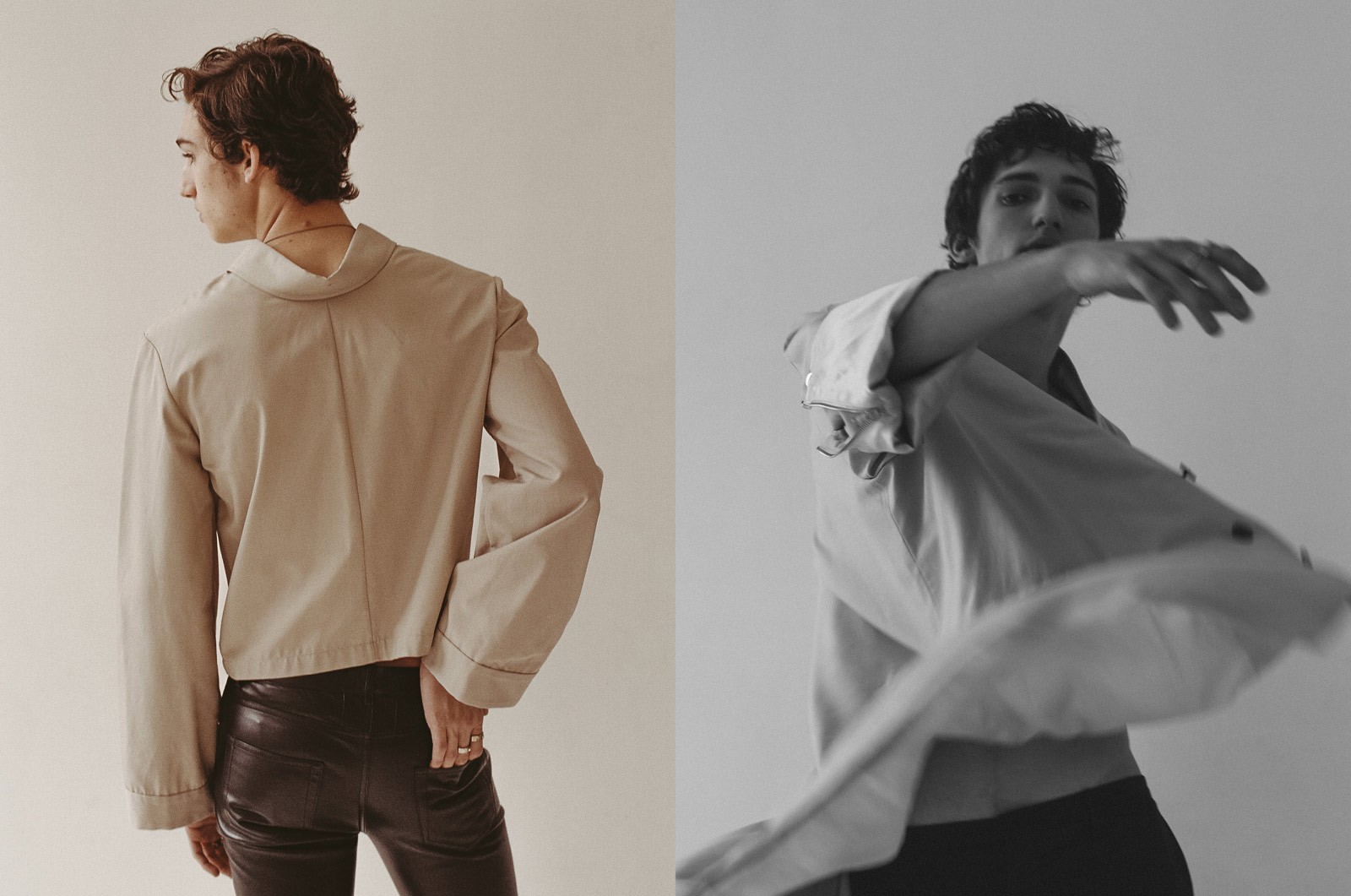 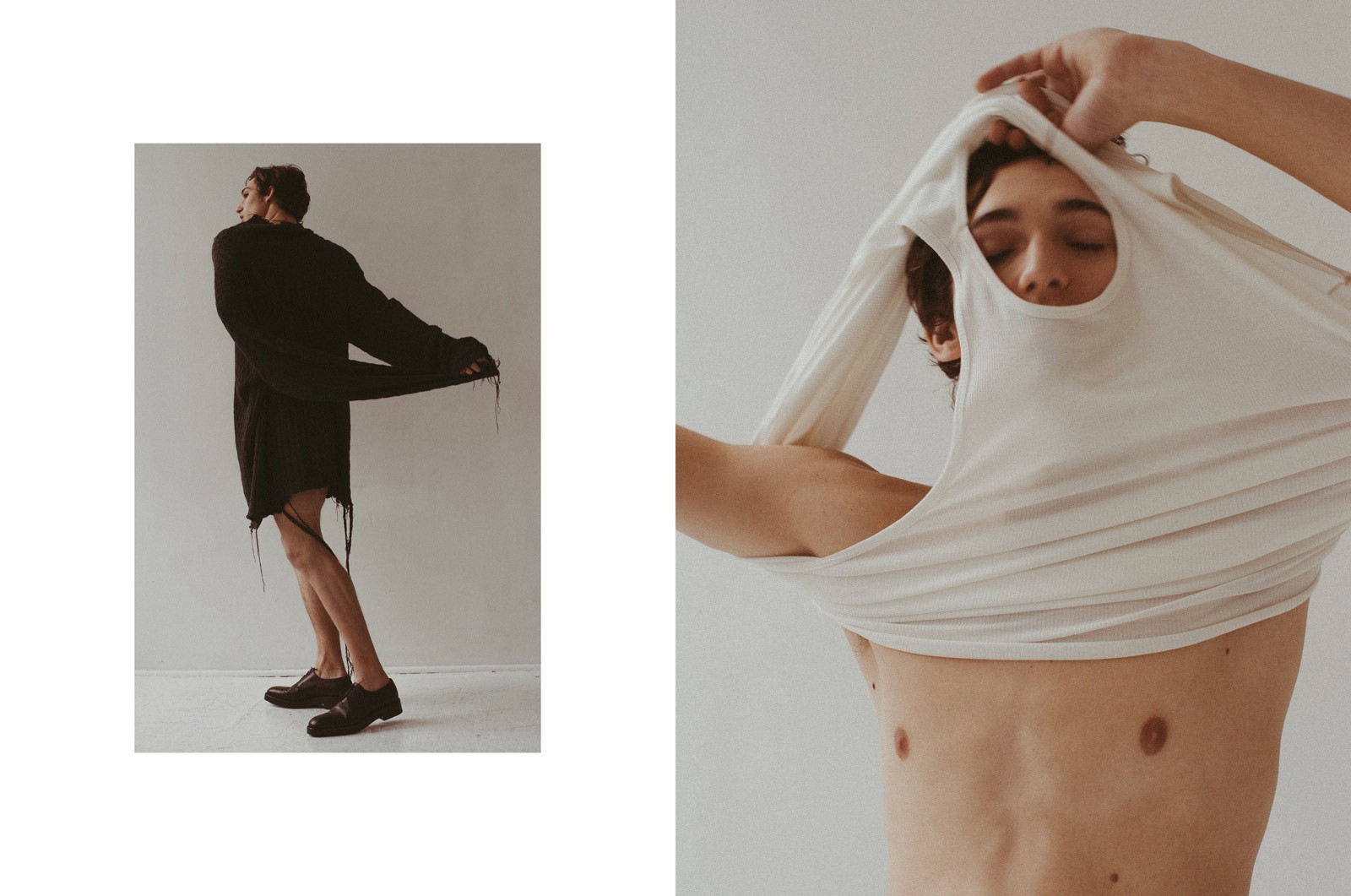 Left, sweater by RAF SIMONS via DAVID CASAVANT ARCHIVE, shorts by LINDER, shoes by JIL SANDER. Right, top and jeans by LINDER, necklace model’s own, lion ring by GUCCI, other rings by VALENTINO. 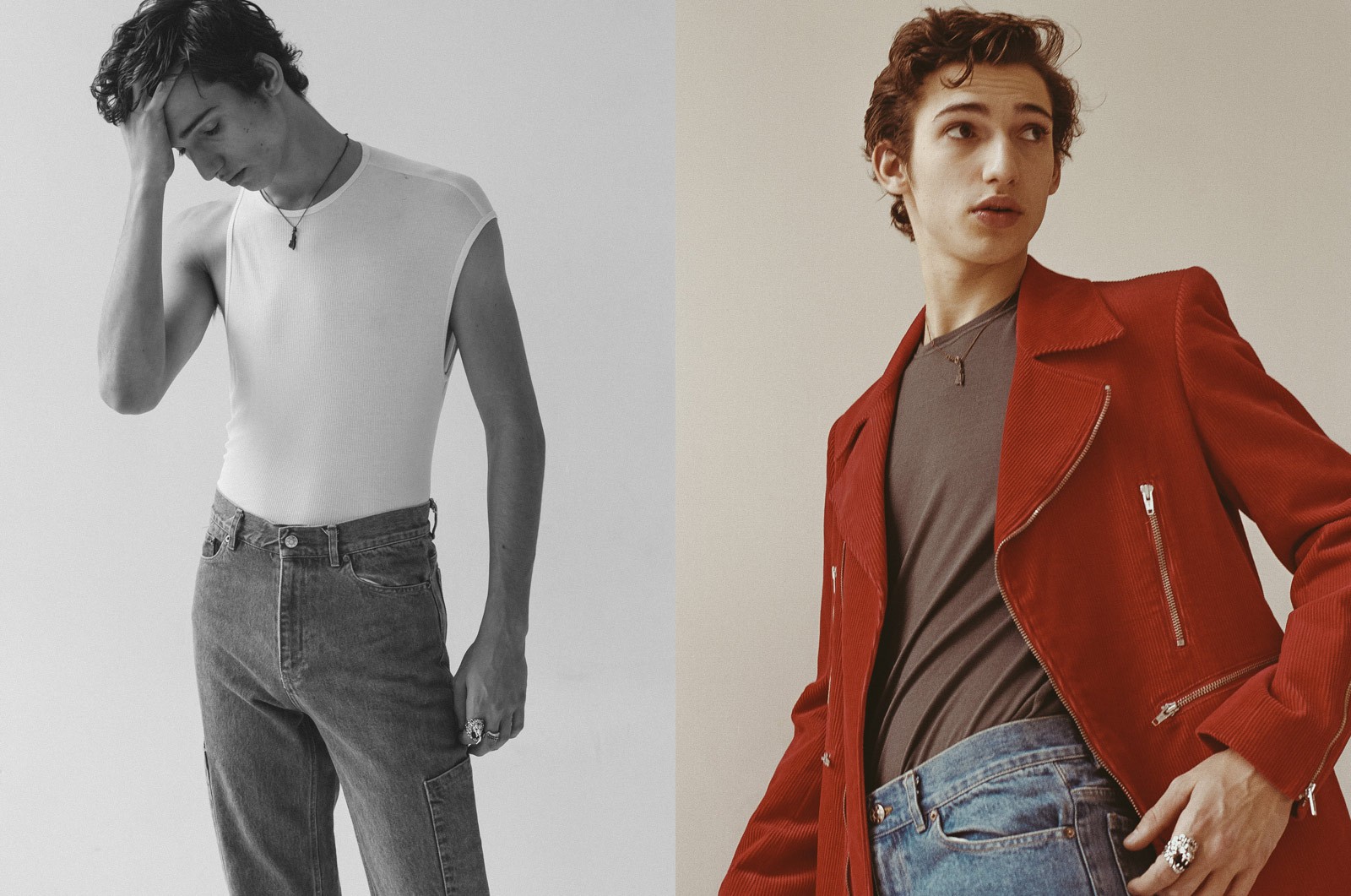 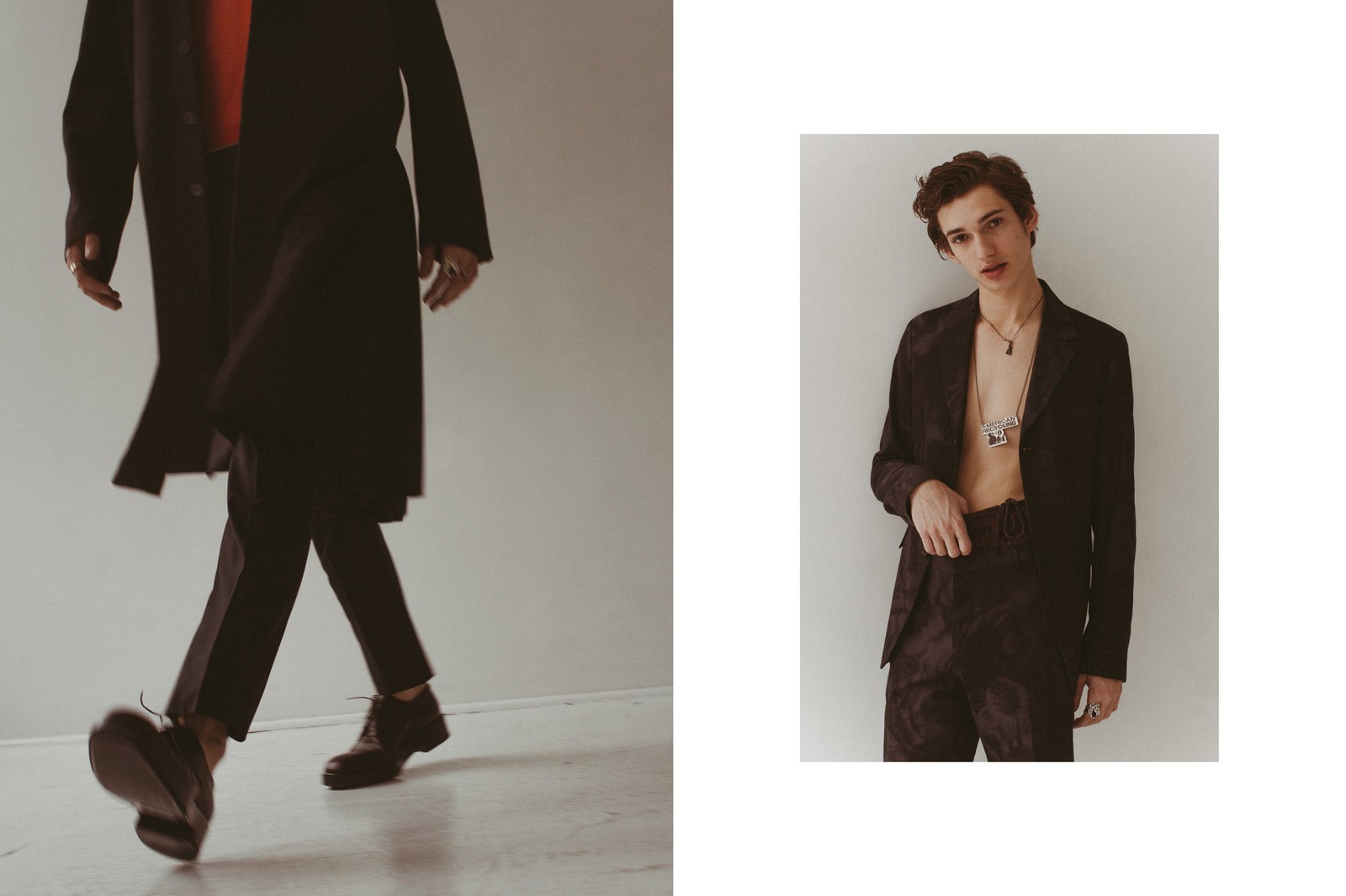 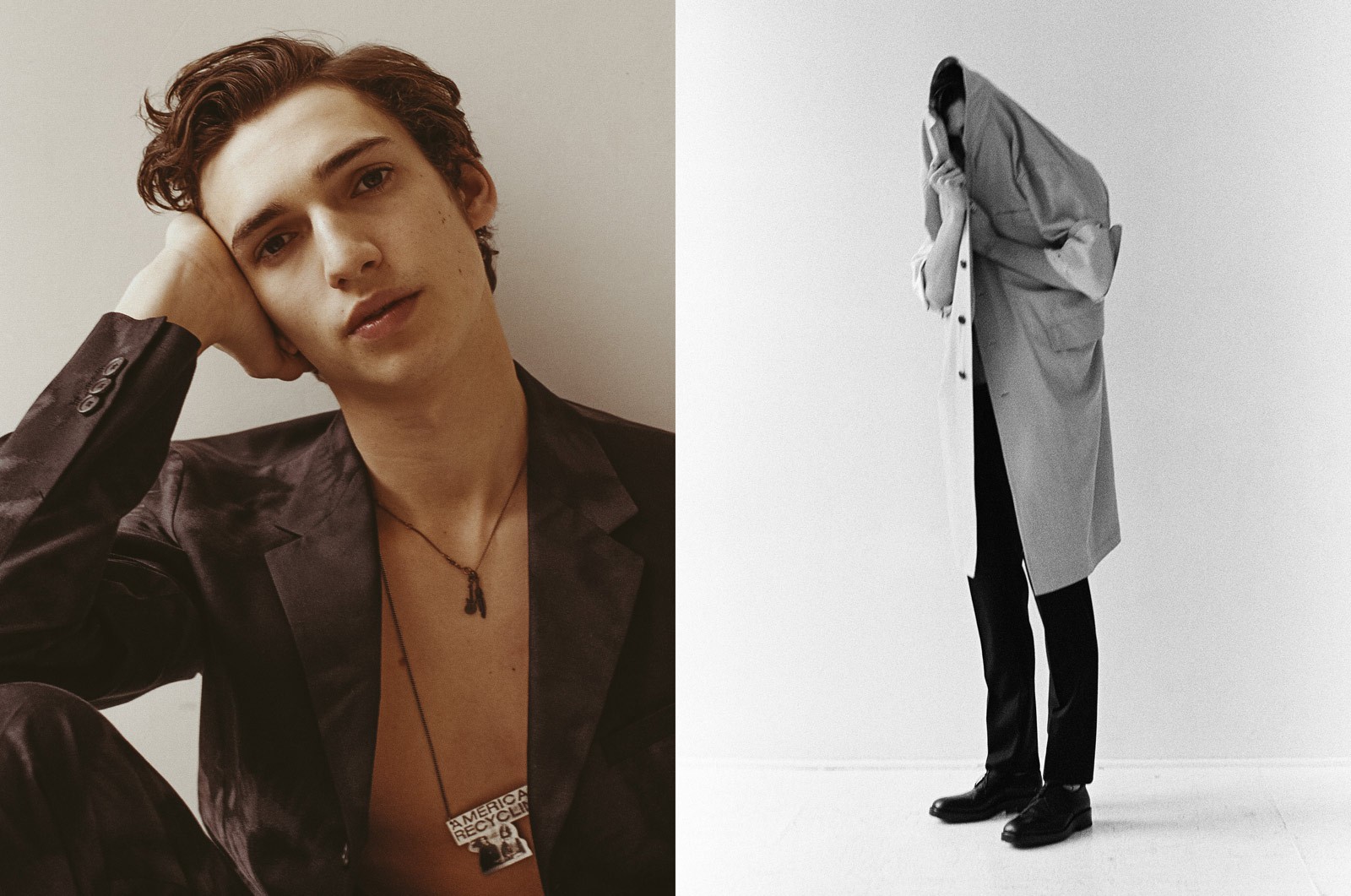 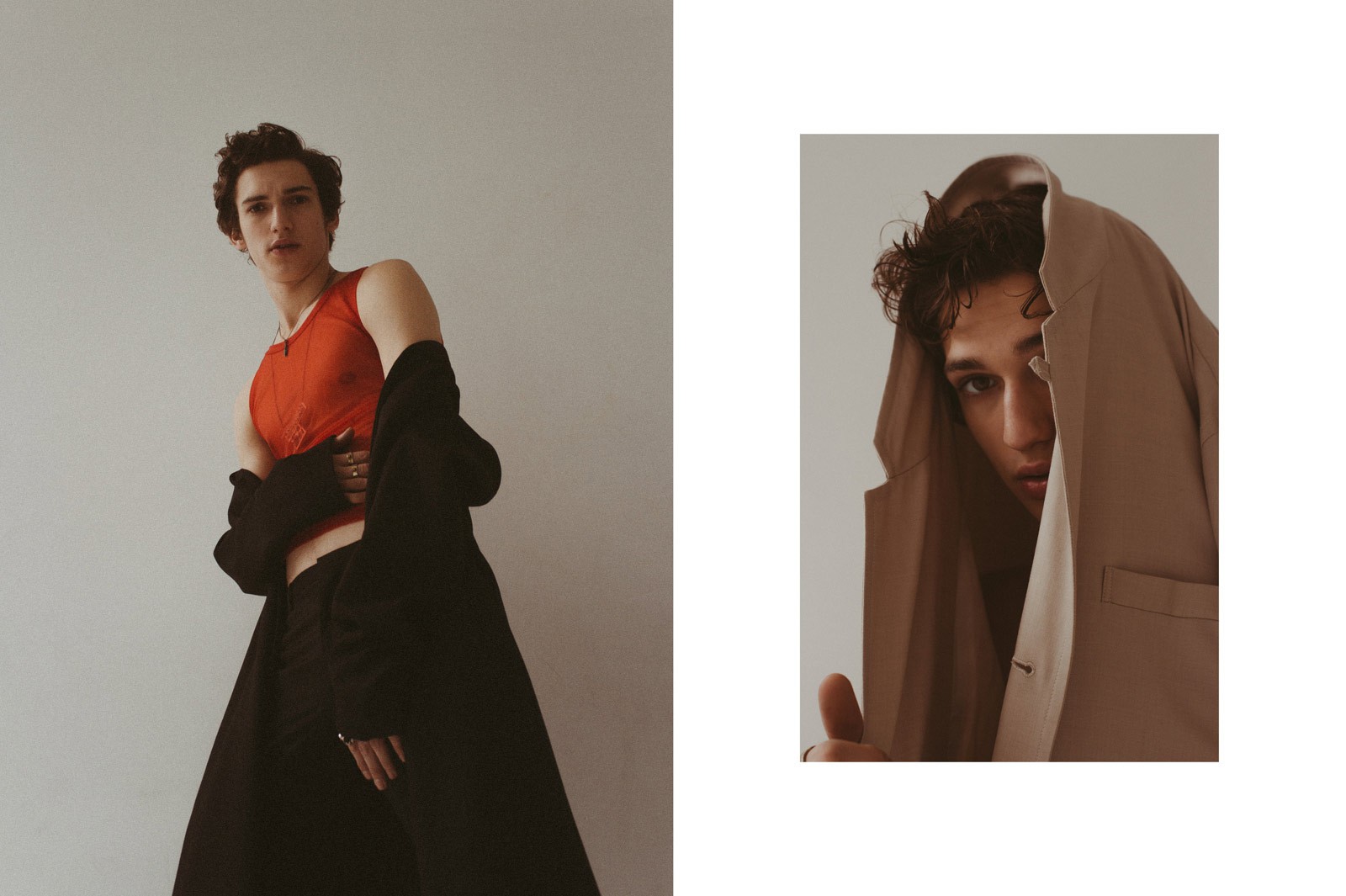 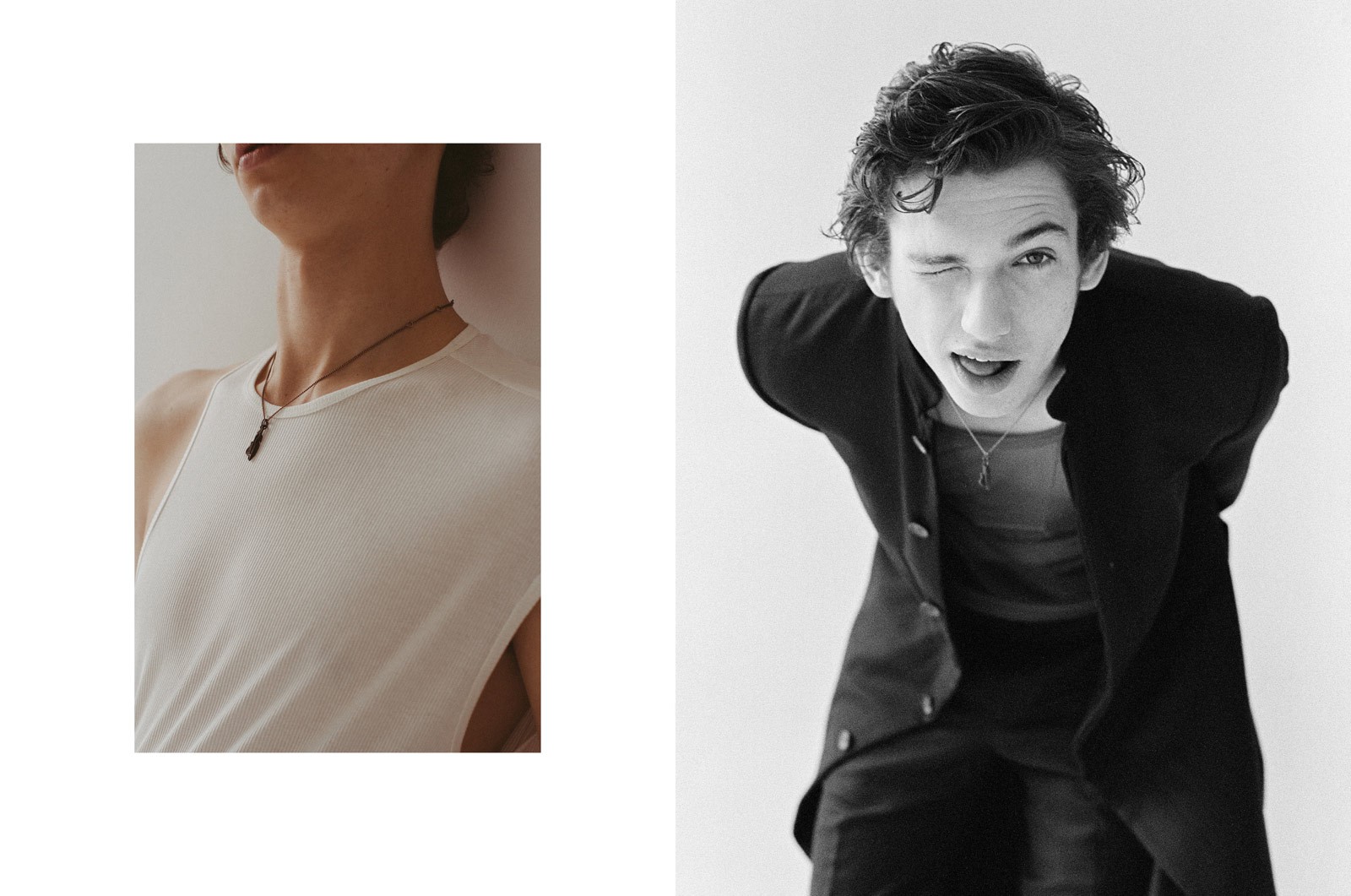 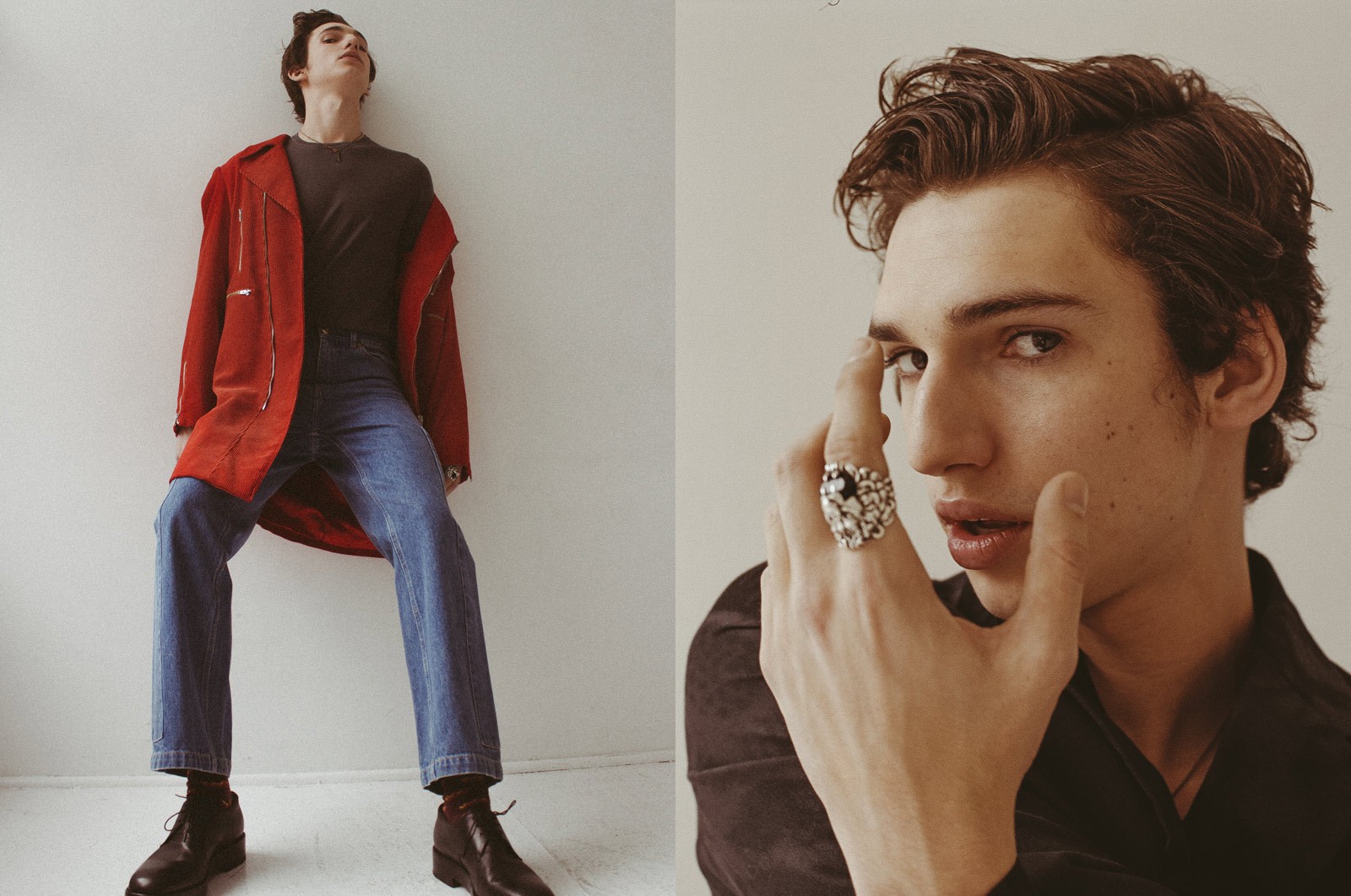 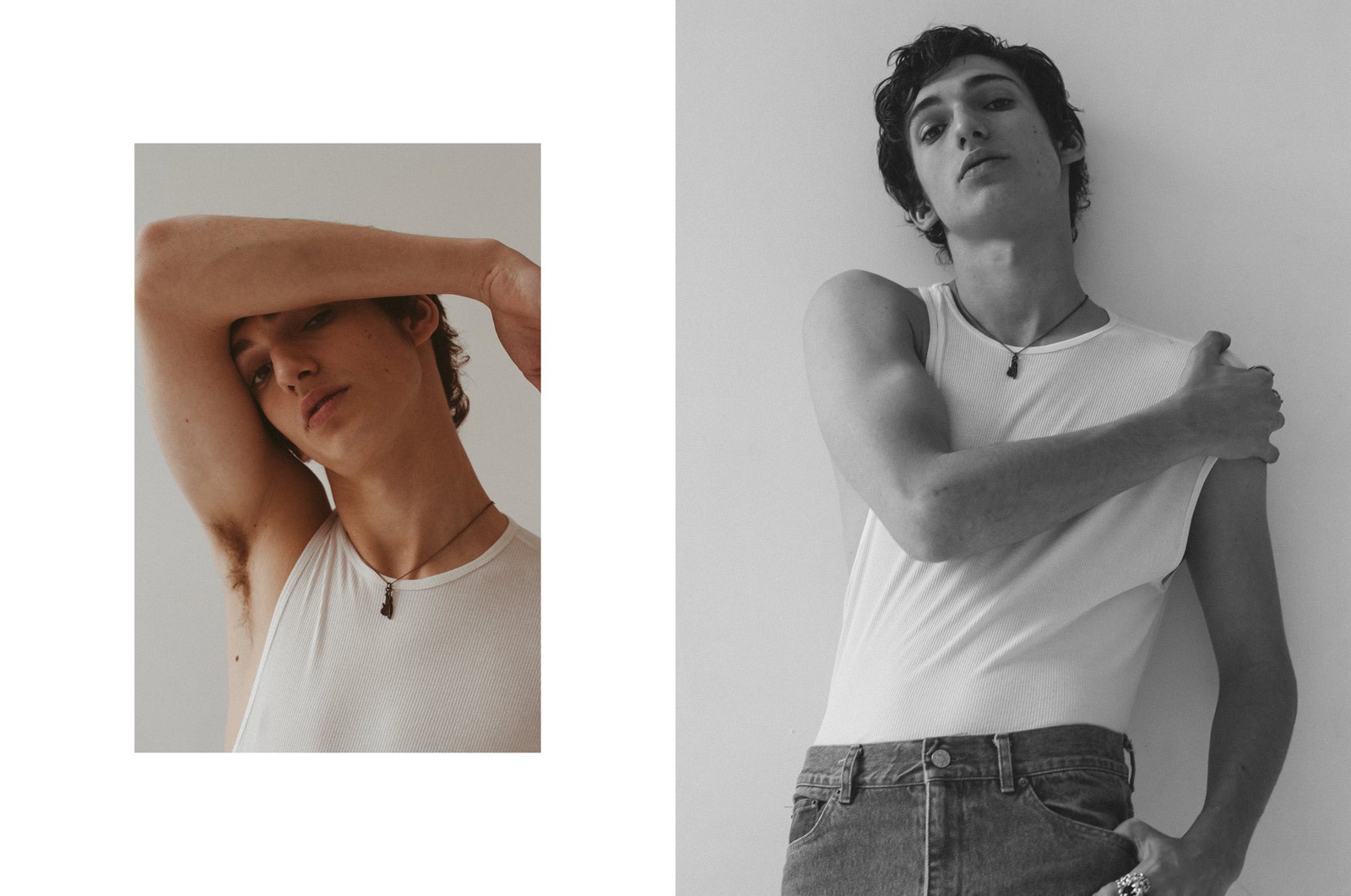 Top and jeans by LINDER, lion ring by GUCCI, other rings by VALENTINO, necklace model’s own. 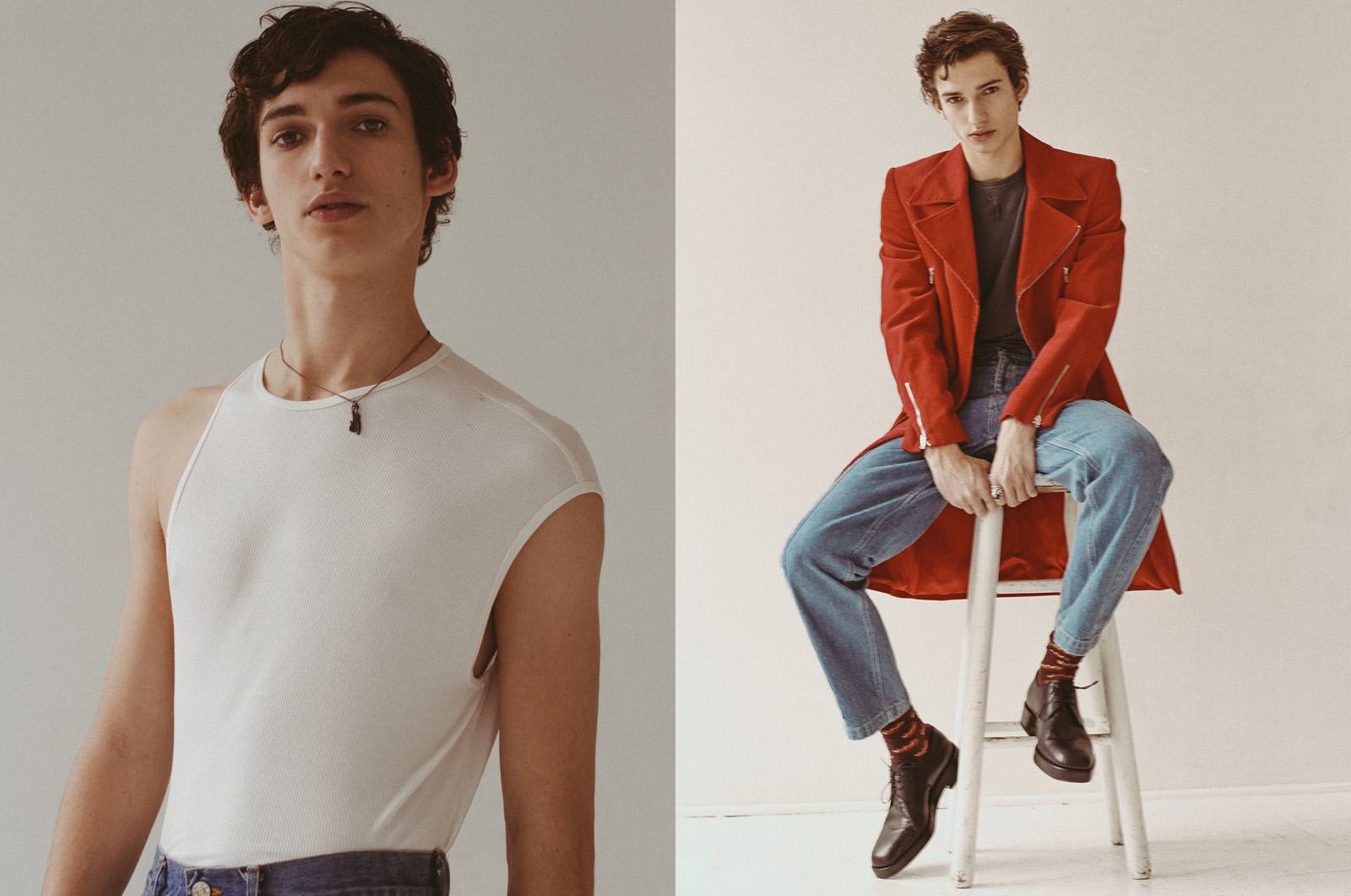 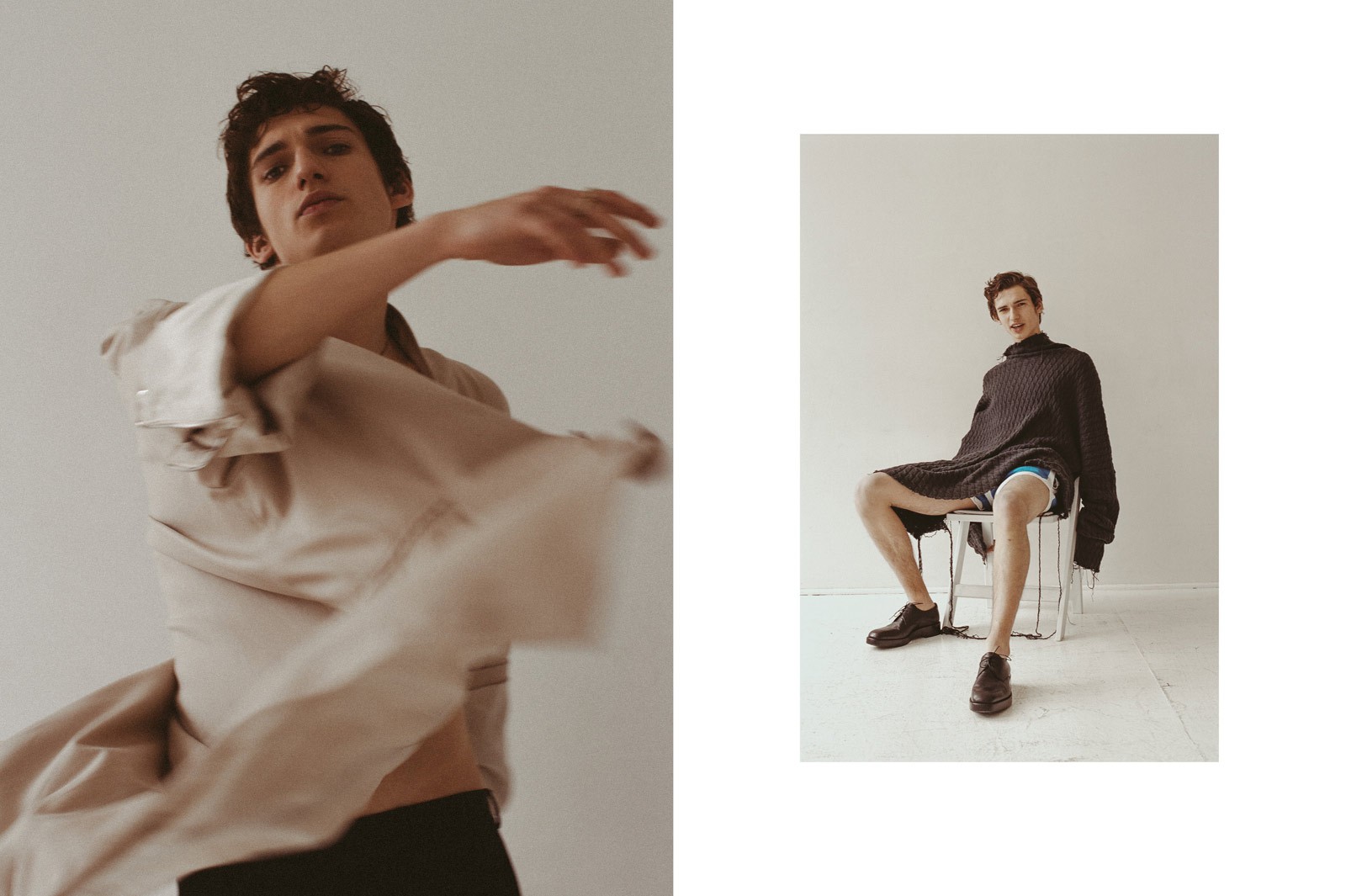 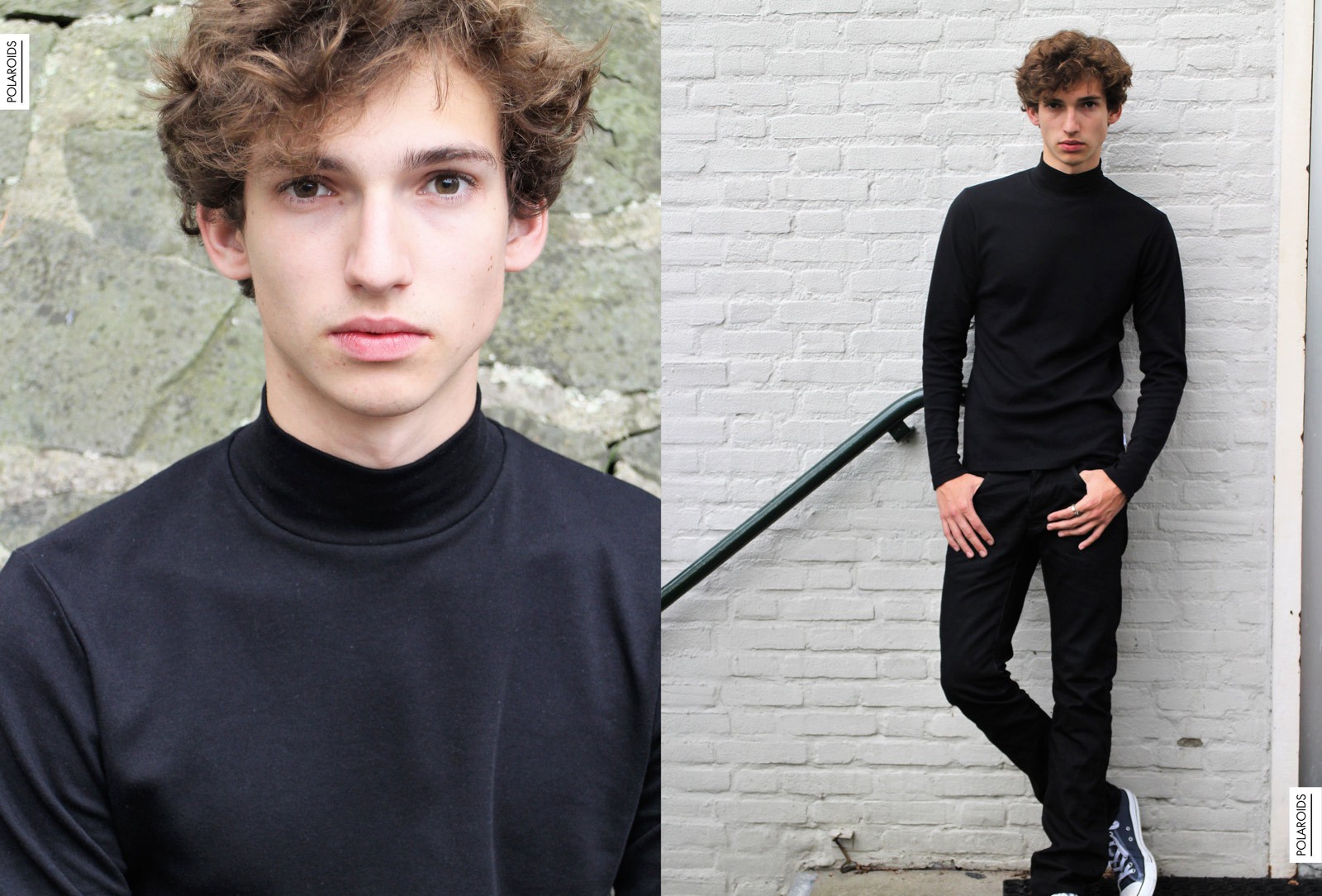 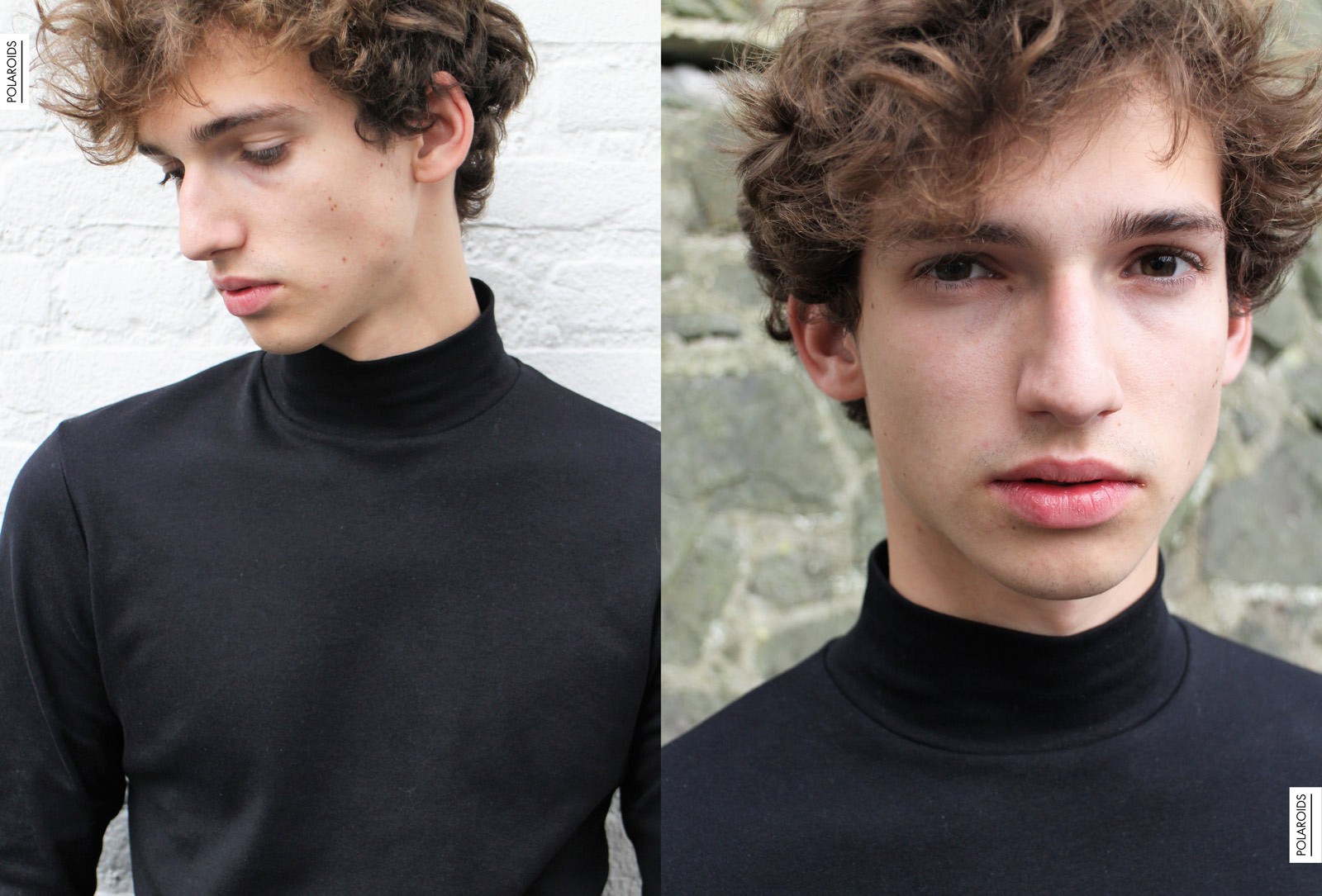 Quintin was shot exclusively for MODELS.com by Danny Kasirye, with styling by Koen T. Hendriks, and grooming by Nathan Rosenkranz (Honey Artists). Interview by Jonathan Shia. Special thanks to Jordan Morris at Fusion Models.

Place of Origin:
Amsterdam, the Netherlands

How discovered:
I was at Burger King with my girlfriend back at the time and I went to the toilet. I’m taking a piss and this buff black dude starts standing next to me and looking over and smiling at me. I’m like, nah, I’m not having any of this shit. So I try to look from the edge of my eye and he’s just full-on staring at me smiling. I’m like, shit, so I just finish up, run out of there and grab my girlfriend out of the line, and just run out. The guy comes out and he’s like, “I have to have your number.” I’m like, “Nah bro, no fucking way.” And he’s just like, “No, you don’t understand,” starts talking to my ex-girlfriend and he’s like, “i’m going to make your boyfriend a model,” and she’s like, “Ok!” So then I was like, “Alright, fine, fine,” and gave him my number and two weeks later I’m running around in Milan like a headless chicken.

What was your first modeling job?
My first big one would probably have been Prada. I remember it very clearly because they sent 17 angry emails to my agency that they couldn’t shut me up so I needed to come with a personal babysitter to make sure that I didn’t talk as much because the designers couldn’t concentrate. I was definitely nervous. I was about to piss my pants honestly. It’s so crazy, you just get plucked off the street. I used to design games and read comics, you can guess what kind of personality I used to have and what I was comfortable with. I’d sit inside, play my video games, talk to my one or two friends, and that’s it. Then suddenly you just get dropped in this atmosphere of attention and everything’s revolved around what you’re wearing and how you’re looking and it was something that wasn’t even on my radar as a person. I was scared shitless honestly. It’s just so intense, it’s Prada and it’s the biggest brand. I was like, Holy shit, and they’re just lining you up and everybody’s like, “Quiet, quiet,” and then you just got to walk out in this room and be calm and elegant. I was like, If I trip right now, I’m going to ruin everything I’ve been running around for, just don’t trip, just don’t trip, just don’t trip. That was my first biggest fear, I was honestly concerned that I would fall into the audience and ruin the entire show, because that’s the kind of shit I expect from myself. Luckily that didn’t happen and I learned how to walk on two legs. Guess I’m just a brilliant human being who can walk on two legs.

Favorite things:
Dogs. I’m a dog type of person, always had a dog. I have a dog right now, a Swedish Shepherd. It’s like a German Shepherd puppy, but it stays that small forever, it’s really sweet. I just think dogs are good for your health and mental stability.

What are you listening to at the moment?
That’s probably got to be rap. Some of my favorites are Childish Gambino, G-Eazy’s really getting on top of his shit, Kendrick Lamar’s never wrong. I quite like A$AP Rocky, but then because I started seeing him during fashion shows and seeing him as a famous person, I kind of stepped out of it. I was just like, Nah this is weird. And Eminem’s always a classic.

Favorite movie, tv show:
Right now, one of my favorite movies definitely is Deadpool. I used to read shit tons of comics and Deadpool was probably one of my favorites for a long time, so that definitely gets on the high list. I think the movie that hit me most personally is either Life Is Beautiful or Schindler’s List, because in Europe, you still see the remains of World War II, so World War II has this big influence about how we think about Europe nowadays and how we’re very liberal and progressive because we don’t want to go back to anything like that. Some messed-up shit happened there and you’ve got to learn from the past. Favorite TV show—Rick and Morty, that’s easy. Rick and Morty’s got so many layers to it, it’s just really good to watch. Every time you watch it, you can pick a few new things out of there where you’re just like, Oh shit, that’s hilarious. It’s just a great show I recommend to anyone.

Favorite designer, fragrance or beauty product:
I like Valentino because I met the people personally, absolutely wonderful, lovely people. They were the first ones to be like, “Hey Quintin, why don’t you come over to Paris?” So Valentino got me over to Paris and they gave me all those opportunities, so they’re special to me. Ann Demeulemeester makes clothing which I personally would like to wear in any type of situation, but as a designer like, Holy shit, this guy, it would probably be Raf Simons just because I think he’s the most baller type of person.

What would you be doing if you weren’t modeling?
I’d make video games. I used to be a video game designer and I gave that up to do modeling, so I’d probably resort to old habits.

What’s something uncool that you love anyway?
I guess I’m just a fly type of person! No, definitely not. I read comics since I was a wee little toddler, absolutely fascinated by it. I guess you could say I’m kind of a geek because I game 99% of the time. If I’m not gaming, I’m probably checking out comics or even conspiracy theories around comics. Comics are a nerdy thing, but nowadays with media and the new movies, it’s kind of acceptable. Before, I couldn’t come out of the closet and be like, “I am a comic reader!” People would be like, “Yo, get the fuck back.” Now everybody’s like, “Oh that’s so dope.”

Favorite thing about modeling?
It’s definitely all of the traveling, getting exposed to new cultures. It really widens your perspective on life itself and it really helps you grow as a person. You get exposed to new languages and new people. It’s also so great that, because male models get plucked off the street, it’s not about where you’re from or who you are, just what you look like, so you can meet anyone. There’s these beautiful individuals that you’d never ever meet in your entire life just walking around normally, because they fall completely out of your perspective or comfort zone and you’d never hang around with those kind of people, then you’re stuffed into one room together and it’s just amazing. I wouldn’t change it for the world.

What’s the best thing about your hometown/country?
Peace and quiet, definitely. Very friendly people, it’s just generally really, really nice. When I was growing up there, I was like, This is boring, I want to go somewhere else, but then where you’re going somewhere else the entire time, you just miss home.

Which brand would you really love to model for?
Vans. They should’ve hit me up ages ago. Honestly guys, if you’re reading this, Quintin Van Konkelenberg. I’ll do it for free, it’s fine, just pay for my flight there. I’ve been skating and wearing Vans since I was 11, just only Vans. I’m just a dipshit kind of person and I ruin my shoes, but with Vans it doesn’t matter, because if they’re fucked that basically means that you’ve been doing a good job skating.

Place you would love to visit:
Mars. It’s exciting shit, we’re going to move there, we’re going to be living there, and I just want to be there when everything’s thriving and set up and you’re just standing there like, Holy shit, I’m on Mars. This is going to happen in our lifetime, that’s so weird. People don’t realize this, within 40 years this shit’s going to happen and I’ll be able to buy a ticket to Mars and stand on Mars! It’s crazy!

Currently you’re obsessed with/about:
Mars! Technology and futurism. I spend a lot of time being depressed about all the fucked-up shit that we do to each other, overpopulation, fishing the entire seas completely dry, all that shit. There’s a lot of things that you can sit and mope about in your room and think about too much, and it’s just wasted energy honestly. So what I started doing is I started Googling things that happened in science, things that we succeeded at, things that we were able to achieve, and it’s really nice. It’s a positive view in front of you, because when push comes to shove, you can’t go to the past and you can’t change the past, you can only change the future. If you’ve got a bright mindset and you know where you want to go, that’s basically the only hope that you have left. It gives you a good sense of achievement and hope to see these great things that come out of research and technology nowadays.

What’s the best piece of advice you’ve ever been given?
My dad always said, think before you act. Just that, and he’s always repeated it because I always fuck up. It’s something that’s stuck with me my entire life and every decision that I make is based on that lesson. It’s just a very good lesson I want to give to everyone. Before you do something stupid or before you do something irrational, just take one second, think about it, what’s the consequence of this, and it helps you make a lot better choices in your life in general.