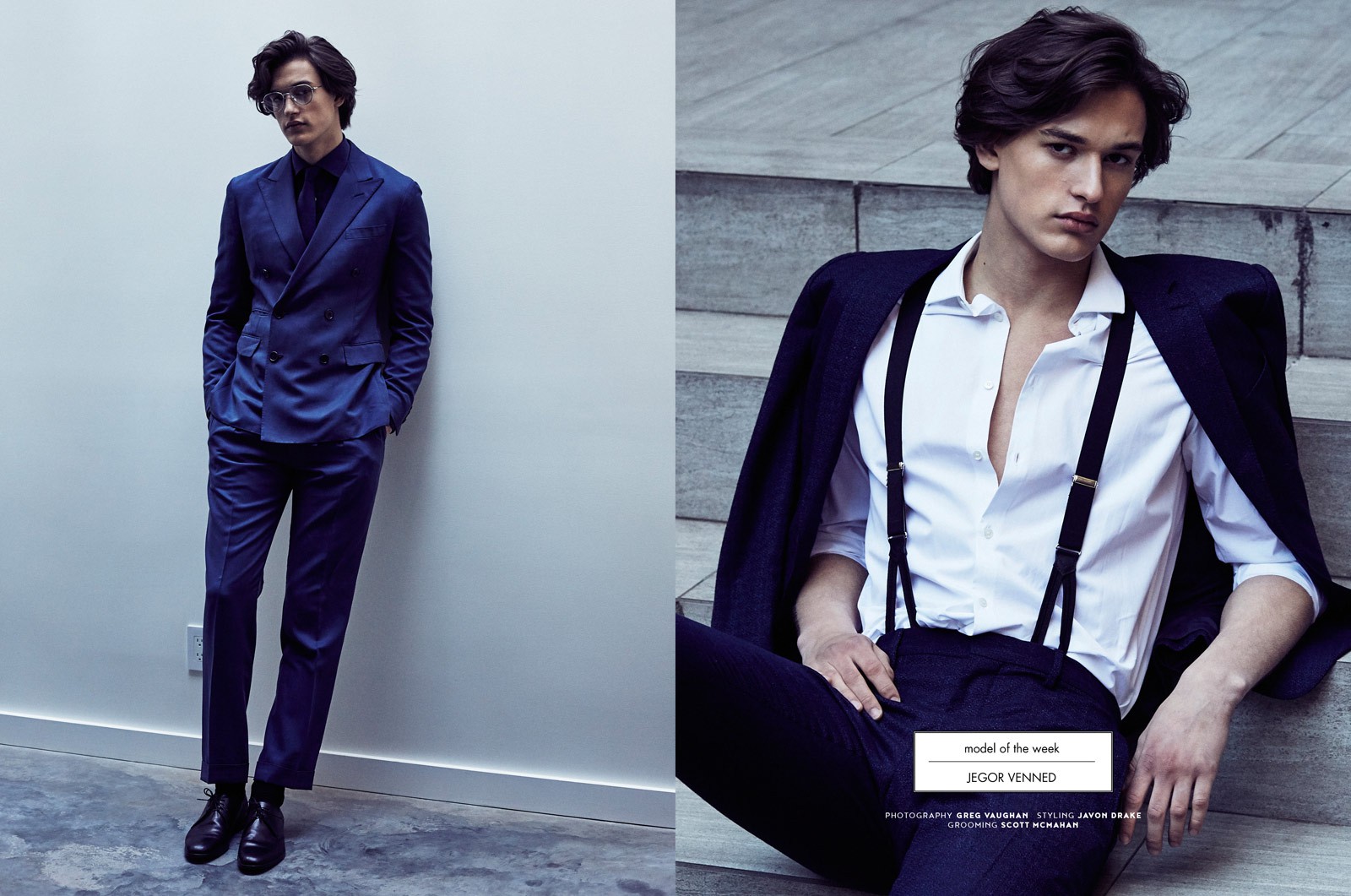 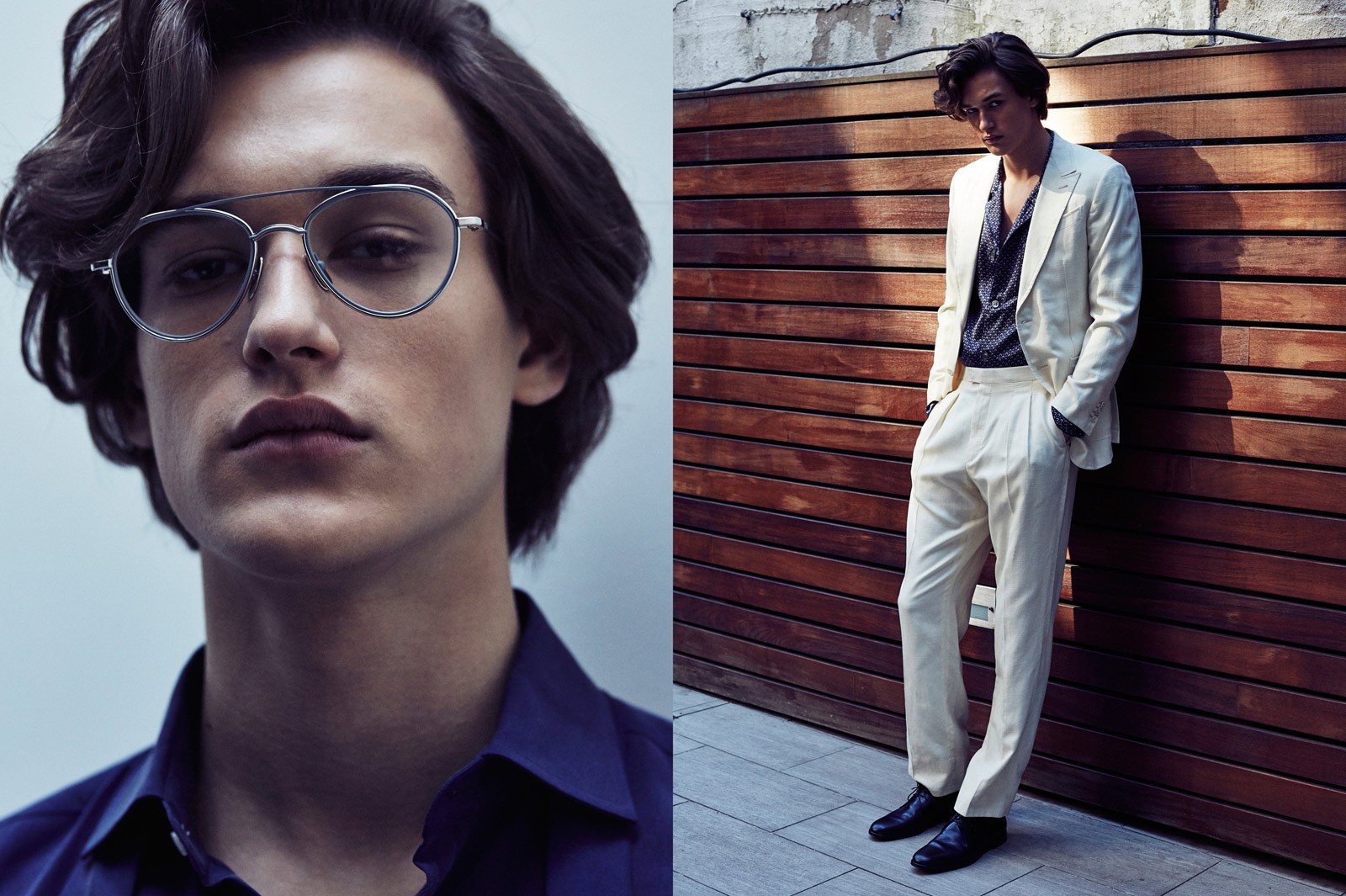 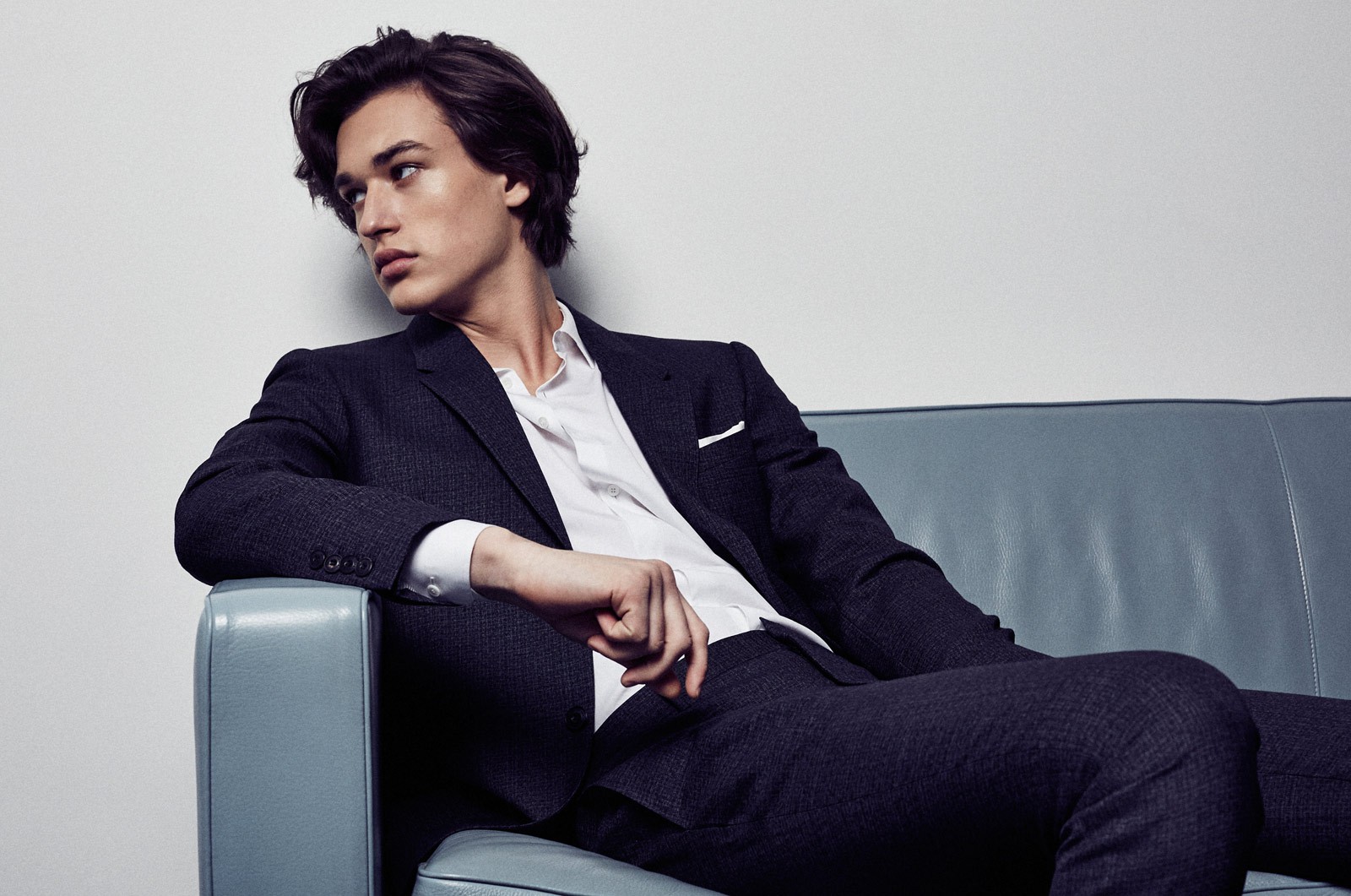 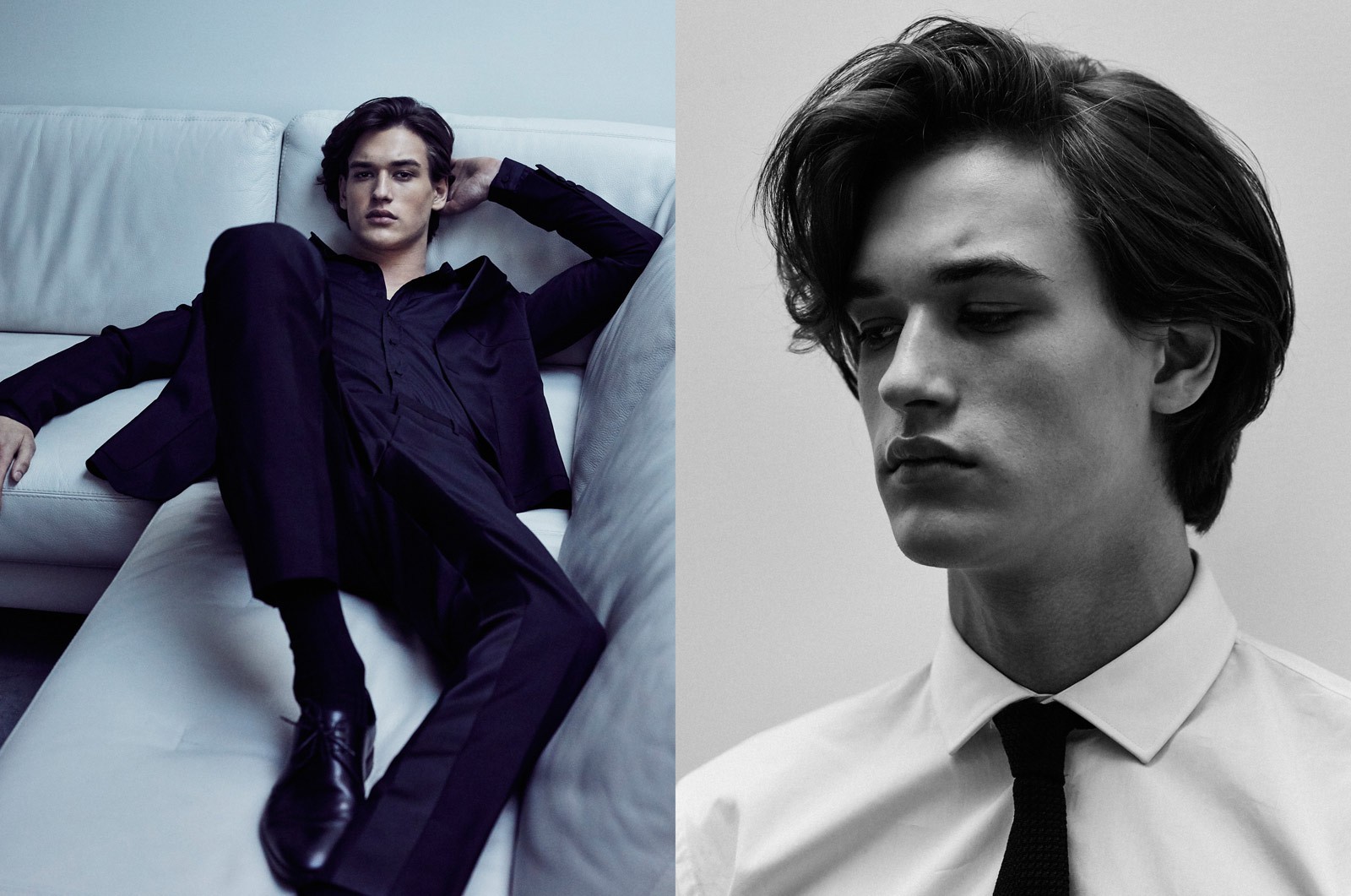 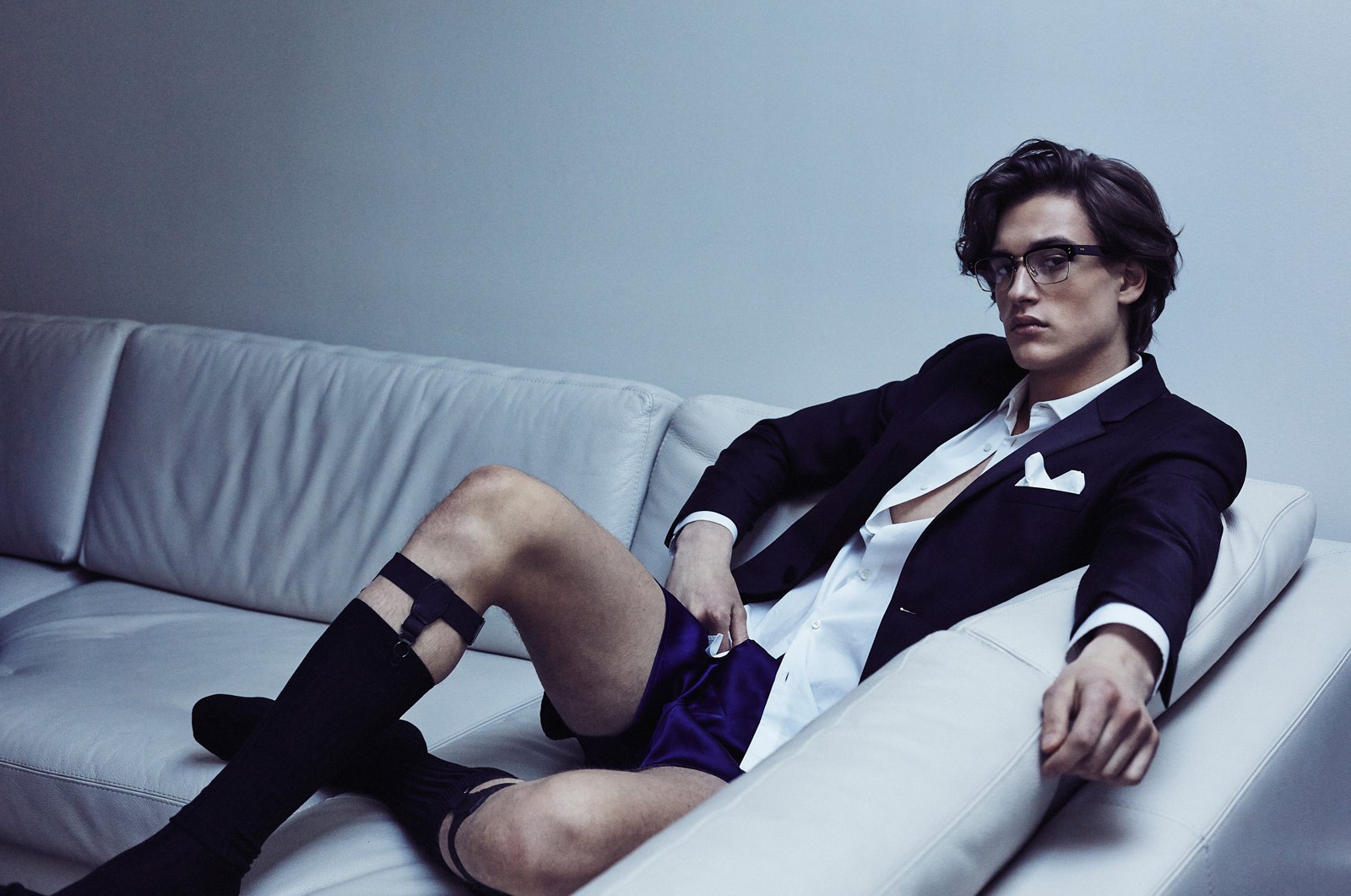 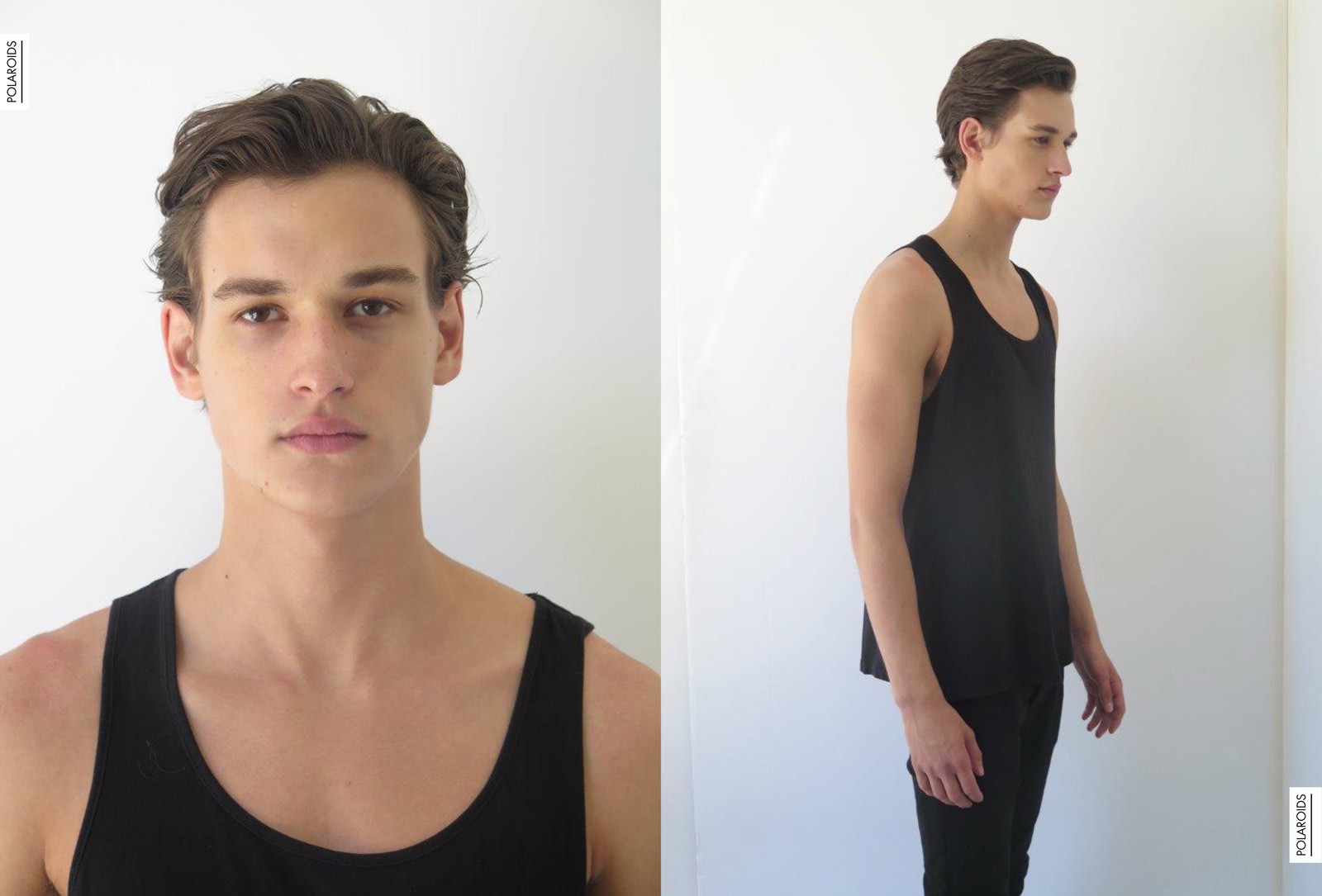 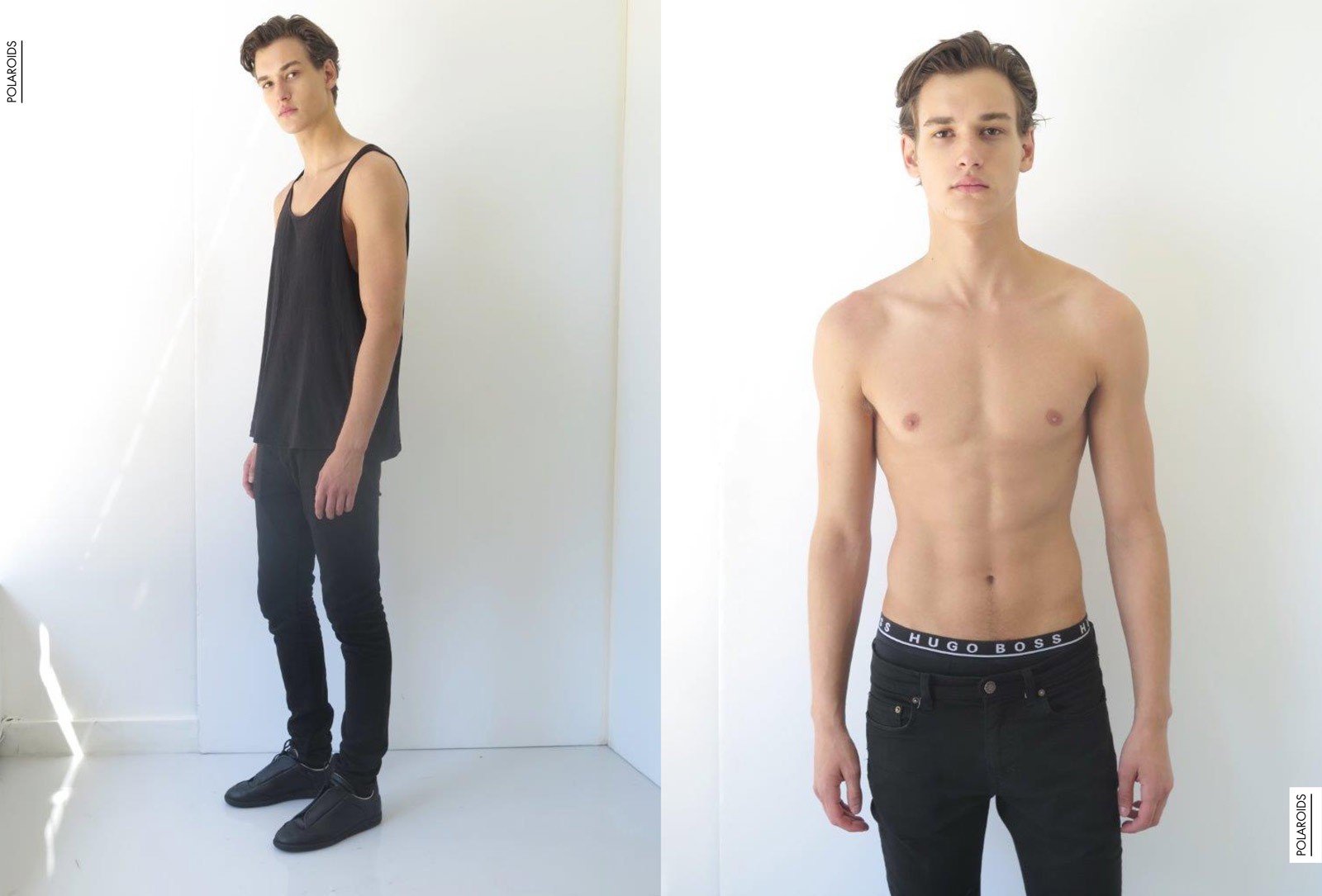 How discovered:
It’s a funny story. I was at a party at my cousin’s place. It was six AM, pouring down rain, I’ve never looked this bad in my life, and this guy comes over to me and was like, “Yo, you should be a model.” He had nothing to do with fashion at all, and he took some photos of me and just sent them to the agencies in Denmark. All of them said no until Elite saw me and they wanted to sign me and then that’s it. I was pretty young when they scouted me. I was still in school so I had to finish. I was still 15 or 16 when I did my first fashion week in Paris.

Favorite things:
First of all, I can’t live without music. I listen to music 24/7, I’m always into music. I always write lyrics for song ideas. I need music to keep me going, I need music for anything I do. I also love sports. I played football all my life.

What kind of music do you play?
I played saxophone as a kid. I started in third grade and I always wanted to play guitar, but my mom and dad didn’t buy me a guitar or drums, but I always tried to play drums. I always had rhythm. Now I’m trying to learn to produce, to get really good at it. I didn’t do music for like four years and now I’m back at it and trying to sing, trying to produce myself, and work with people that are producers. It’s kind of alternative hip hop, like futuristic with a little bit of soul and symphonic.

What are you listening to at the moment?
At the moment, I’m obsessed with trap music like Migos and Travis Scott.

Favorite movie, tv show:
My favorite movie is called Brat 2. It’s a Russian movie about two gangster brothers from the 90s. I never really watch TV shows, but the only TV show that I’ve watched until the end was Breaking Bad so I would say that one.

Favorite designer, fragrance or beauty product:
It depends on my mood. I like all designers, I don’t think I have a favorite one. It really depends on what I feel like I want to wear that day. I’ve been using Bleu de Chanel most of the time or Tom Ford Noir. I use Bumble and Bumble Surf Spray and their hair gel, and then for facial products I don’t even know what I use. I bought it in a cosmetic salon when I had a skin cleanse and I’ve been using it since.

What would you be doing if you weren’t modeling?
I’ve been modeling full time for two years since I was 16, but I would probably right now either be in school in the Faroe Islands or I would be sailing, like a fisherman. That’s probably what I would do, but I always had big plans for my life. I always wanted to do something with entertainment and I loved fashion since I was a little kid. I always watched FashionTV with my mom since first grade and I was always into clothes.

So how does it feel to be a part of the fashion industry now?
It’s great. It’s really cool because all of these people that I work with are big idols to me, and I love art, I love fashion, and I love to be a part of the designers’ art and their ideas. It feels really great that these people want my look for their art. I’m really proud of where I am.

What’s something uncool that you love anyway?
I like a lot of things that people probably think are really weird and nerdy. I’m a big fan of sci-fi and I love watching documentaries about the universe. I’m really into all kinds of scientific stuff and I watched all the Star Wars movies. I watched everything, like Star Trek. A lot of people like it, but I mean, it’s nerdy. I probably don’t know it myself, but I’m sure there’s a lot.

First modeling job?
My first show was Versace. I had just turned 16. That’s the last time I remember I was nervous before a show. It was a big moment of course, but I didn’t really know what was going on. It was big and there were all these cameras and I was wearing Versace, but I got used to it and I liked it.

Favorite modeling experience so far?
Probably the Givenchy campaign, flying out to LA with Riccardo and shooting with Mert and Marcus and Carine Roitfeld. That was really amazing shooting that campaign, that experience I had out there was great. It’s probably the coolest location I’ve been to as well, those two, three days we were out in the desert and the people that I worked with. Just those two days I learned a lot. I was working with really cool, good people. Or the cover of Vogue Hommes International.

What’s the best thing about your hometown/country?
The feeling of safety, I would say. You feel really safe out there. There’s not a lot of people, and my life is really different for me there now, but growing up there, I could just run around and do whatever I wanted. My parents were never afraid of me going out. There’s no crime, there’s nothing really too bad going on, so I think as a kid having that freedom just to do whatever you want—out all night and all day and your parents not worrying is pretty cool.

Do you get to go back often?
I just went back for Christmas, but I don’t really want to go back. My life changed a lot and that lifestyle there has not really ever been my life and I never really felt at home there.

Which brand would you really love to model for?
I’ve done Givenchy, which I always really wanted to do. I love Givenchy. I’ve done Versace, one of my favorite brands ever. Just the story of Versace’s cool. I worked with those, that’s what I wanted, but there’s probably one client that I haven’t worked with yet, that’s Tom Ford. I would really like to do Tom Ford.

Place you would love to visit:
I’m a big fan of Africa. I always wanted to go around the whole of Africa, in the jungles, in nature, and experience nature and do charity work. That’s what I always wanted to do, go around Africa. Especially Morocco, Marrakesh. I haven’t been anywhere in Africa, but that’s definitely the place I want to go to the most. Everybody wants to go to a beach and relax or to some nice place, but what I wanted to see with my own eyes and experience is Africa.

Currently you’re obsessed with/about:
Music, lately. It just came back to me a couple of months ago. I didn’t do anything with it for like five years. I was playing football, I was doing sports, and I’m just obsessed with music right now. It’s on my mind all the time, I write lyrics all the time. I would really say I’m obsessed with it.

What’s the best piece of advice you’ve ever been given?
From my grandpa, he was such a good person, and he was always just telling me to always enjoy my life, no matter what, and always have fun with everything I do. I don’t know how to explain it. He said it in Russian, but just have fun with everything and enjoy whatever you do, even the bad moments. It sounds really good in Russian when he said it, but that’s probably how I would translate it.